Speckles and other nuclear bodies, the nucleolus and perinucleolar zone, transcription/replication factories and the lamina-associated compartment, serve as a structural basis for various genomic functions. In turn, genome activity and specific chromatin 3D organization directly impact the integrity of intranuclear assemblies, initiating/facilitating their formation and dictating their composition. Thus, the large-scale nucleus structure and genome activity mutually influence each other. The cell nucleus is frequently considered a compartment in which the genome is placed to protect it from external forces. Here, we discuss the evidence demonstrating that the cell nucleus should be considered, rather, as structure built around the folded genome. Decondensing chromosomes provide a scaffold for the assembly of the nuclear envelope after mitosis, whereas genome activity directs the assembly of various nuclear compartments, including nucleolus, speckles and transcription factories. 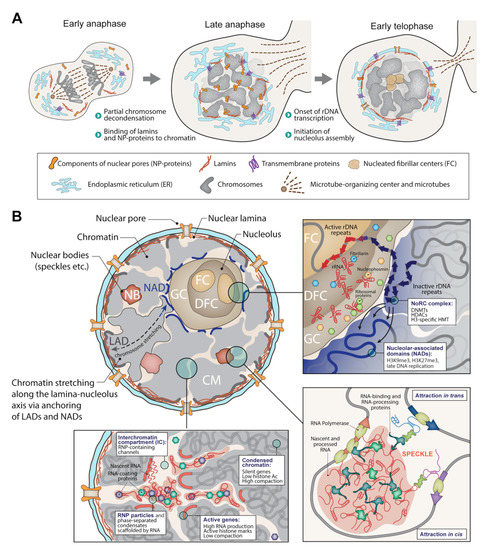