Meizi-Consuming Culture That Fostered the Sustainable Use of Plum Resources in Dali of China: An Ethnobotanical Study
Previous Article in Journal

Forensic Application of Genetic and Toxicological Analyses for the Identification and Characterization of the Opium Poppy (Papaver somniferum L.)
Previous Article in Special Issue

Chorta (Wild Greens) in Central Crete: The Bio-Cultural Heritage of a Hidden and Resilient Ingredient of the Mediterranean Diet

Wild greens (WGs) are thought to have played a crucial role in the post-Neolithic Mediterranean diets of the Near East and the Mediterranean. The current study reports the bio-cultural diversity of WGs (Chorta) in Central Crete. Comparison with some Greek historical data of the 19th and 20th centuries shows that WGs have remained resilient and are still crucial in the daily Cretan diet, with an important role played by weedy Asteraceae species. Cross-cultural comparison with the WGs gathered and consumed in the Central and Eastern Mediterranean demonstrates a remarkable diversity of Cretan WGs and important similarities with those consumed in Greek-speaking Cyprus, the Bodrum area of Turkey, coastal Syria, and Southern Italy. The implications of Cretan Chorta for both historical studies of the Mediterranean Diet and for promoting WGs-centered food heritage are discussed.

An ethnobotanical field study focusing on traditional wild greens (WGs) was carried out in Central Crete, Greece. Through thirty-one semi-structured interviews, a total of fifty-five wild green plants and their culinary uses and linguistic labels were documented; they were mostly consumed boiled (vrasta) or fried (tsigariasta), as a filling for homemade pies. Comparison with some Greek historical data of the 19th and 20th centuries showed that WGs have remained resilient and are still present in the current Cretan diet. Cross-cultural comparison with the WGs gathered and consumed in other areas of the Central and Eastern Mediterranean demonstrated a remarkable diversity of Cretan WGs and important similarities with those consumed in Greek-speaking Cyprus, the Bodrum area of Turkey, coastal Syria, and Southern Italy. We discussed the cognitive categories linked to Chorta, as well as the possible origin of an original “bulk” of post-Neolithic food weeds that could have spread from the Fertile Crescent westwards across the Mediterranean basin over a few millennia. The current study represents a crucial effort to document and preserve the bio-cultural gastronomic heritage of Chorta and it is advisable that both biology and history scholars, as well as policy makers, pay needed attention to the WGs of the Cretan and Mediterranean diet. View Full-Text
Keywords: ethnobotany; wild food plants; Mediterranean diet; food heritage; Greece ethnobotany; wild food plants; Mediterranean diet; food heritage; Greece
►▼ Show Figures 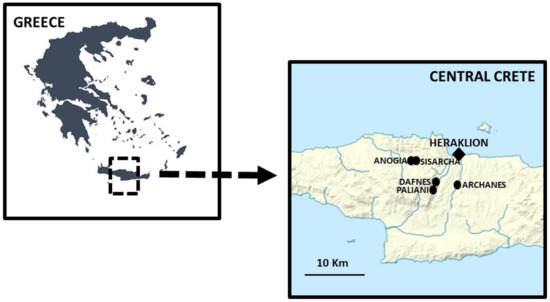