Horizontal Ridge Augmentation: A Comparison between Khoury and Urban Technique

With the emergence of novelty regeneration techniques in the implant dentistry field, the professional may have some queries about which one to use in their daily practice. No systematic review, to date, analyzes the horizontal gains achievable with the two main procedures for bone regeneration: the Khoury technique, which uses split blocks obtained from the patient himself, or the Urban technique, which employs membranes to contain the biomaterials. Regarding this paper, the reader will be able to decide if any of these options is adequate for the indication required.

Purpose. The objective of this systematic review was to evaluate and compare the clinical efficacy of horizontal alveolar ridge augmentation techniques described by Khoury and Urban. Methods. A systematic electronic search in the MEDLINE databases, SCOPUS, WOS, and the Cochrane Central Register of Controlled Trials (CENTRAL) as well as a manual search, were conducted independently by two reviewers up to July 2021. Results. Six studies met the pre-established inclusion criteria and were included in the descriptive analysis. Due to the heterogeneity found across the included studies, meta-analysis could not be performed. Horizontal bone gain was between 3.93 ± 0.9 mm and 5.02 ± 0.8 mm with the Khoury technique and between 3.9 ± 0.9 mm and 5.68 ± 1.42 mm with the Urban technique. Similar complication rates were reported in both groups: infection (7%), in the Khoury technique, and membrane exposure (3.2–13.6%), in the Urban technique, being the most frequent events. Conclusions. Both techniques were found to be effective, in terms of clinical bone gain, for horizontal alveolar ridge gain. Nevertheless, available literature is limited, and there is a lack of comparative studies to better evaluate the results.
Keywords:
dental implants; guided bone regeneration; horizontal bone augmentation; bone graft

Tooth loss is accompanied by a series of adaptive changes, leading to dimensional alterations of the alveolar process. During the first year after tooth extraction, Schropp et al. [1] described 50% bone loss in the buccal-lingual dimension, with 30% of the initial ridge width lost during the first 3 months. In addition, this dimension reduction of the jaws also affects vertically. Over time, these resulting ridge deficiencies may limit proper dental implant placement [2,3,4,5].
In day-to-day practice, it is common to deal with insufficient alveolar crests that may require surgical augmentation for placing implants in a correct position. Monje et al. [6] showed, in a recent preclinical study, that implants placed with a sufficient peri-implant buccal bone wall thickness, greater than 1.5 mm, were exposed to significantly less bone loss compared to those placed in sites exhibiting less than 1.5 mm. Therefore, the presence of alveolar ridge deficiencies often requires reconstructive procedures in order to increase the alveolar ridge to allow correct implant placement. Different procedures have been described, such as short and narrow implants to avoid bone regeneration or techniques to regenerate, in a horizontal and vertical way, the alveolar crests, distraction osteogenesis, guided bone regeneration, or block grafts, to obtain an adequate alveolar dimension. Bone augmentation is justified in three circumstances: in cases where an implant cannot be placed in its ideal position, its long-term success or primary stability is abridged, or if high aesthetic requirements are demanded [7,8,9,10,11,12].
In every regenerative procedure, it is mandatory to accomplish four major principles that Wang et al. [13] described as PASS and allow a more predictable GBR: primary closure to facilitate a protected environment from microbiota and mechanical forces, angiogenesis to promote de novo bone formation, space to assure the different compartments and avoid the collapse of the biomaterial, and stability of the blood clot. These requirements enable better results and reduce the incidence of possible adverse effects.
Within the wide range of different augmentation procedures, guided bone regeneration (GBR) and the use of autogenous bone blocks are the most common interventions in bone augmentation; Khoury et al. [14] described the stabilization of two split autologous bone blocks by microscrews and filling the generated gap with autogenous bone chips. These split bone blocks are obtained, either from the mandibular symphysis or ramus, using piezoelectric surgery or microsaws, obtaining a block that will later be divided into the two final thin laminae. Among the great variety of different GBR procedures for horizontal bone augmentation, Urban et al. [15,16] described the utilization of a 1:1 mixture of autogenous and xenogenic graft material, covered by a resorbable collagen membrane that is stabilized by titanium pins.
Due to the limited comparative information about these two techniques specifically, without combining them with other procedures or materials, this systematic review aims to evaluate and compare horizontal clinical bone gain and complications arising from the alveolar ridge augmentation techniques described originally by Khoury and Urban in the treatment of horizontal ridge deficiencies.

The guidelines of the Preferred Reporting Items for Systematic Reviews and Meta-Analyses statement (PRISMA) were followed in this systematic review [17]. It was registered in the International Prospective Register of Systematic Reviews (PROSPERO) (Reg. No. CRD42021229169).
The following focus question was developed according to the PICOS design (Population, Intervention, Comparison, Outcomes and Study type) (Table 1).
Question of interest: “In patients with horizontal alveolar ridge deficiencies (Population), what is the horizontal ridge augmentation obtained (Intervention) by means of the Khoury and Urban techniques (Comparison) in terms of clinical horizontal bone gain (Outcome) found in RCTs and case series (Study type)?”

Studies were included when they met the following inclusion criteria:

A systematic electronic search in the MEDLINE databases, Cochrane Central Register of Controlled Trials (CENTRAL), SCOPUS, and WOS was performed up to July 2021 by applying the following combination of keywords:
((((autologous) OR (autogenic)) OR (autogenous)) AND (((bone block) OR (split bone block)) OR (block graft))) OR (((((xenogenic) OR (bovine)) OR (xenograft)) AND ((guided bone regeneration) OR (GBR))).
Two reviewers (J.S.S, F.P) independently performed a two-step screening process. At Stage 1, the investigators independently screened all titles and abstracts found by the electronic search for relevance. Controversial articles were included for additional evaluation during the following stages in cases of uncertainty. During Stage 2, full-texts of all pre-selected articles were independently reviewed by the investigators to further exclude articles that did not meet the predetermined inclusion criteria, and a third investigator (L.S.L) was consulted in cases of disagreement. Then, an additional manual search was performed based on the references from the definitive list of included articles.

The following qualitative and quantitative data from the included studies were collected:
The outcome variables were classified according to the temporal sequence of the augmentation procedures: T0 represented the moment when grafting procedures were performed, T1 represented the evaluation of the augmented site when implants were placed, and T2 represented the latest follow-up data. At T0, defect size and graft dimensions were registered. At T1, clinical bone gain (CBG), graft resorption (R), and histological data (H) were registered. At T2, implant survival (IS) and marginal bone loss (MBL) were analyzed.

A total of 1377 studies were identified through database searches, and 4 additional articles were found by manual searches. After deleting duplicate studies, 903 studies were obtained. Following title and abstract screening, 862 studies were excluded and 41 studies were included for full-text assessment. Thirty-five additional records were excluded, resulting in 6 final studies that met the eligibility criteria and were included for descriptive analysis. Due to the great heterogeneity found across the included studies, meta-analysis could not be performed. The list of articles excluded from this review and the reasons are presented in supplementary Table S1. Figure 1 shows a flow diagram of the search results.

A detailed overview of patients and studies characteristics is shown in Table 2. Included studies were three case series [16,20,21] and one clinical trial [22] concerning the Urban technique and two randomized clinical trials [23,24] concerning the Khoury technique. There were no comparative studies. The included studies were published between 2013 and 2020. Furthermore, two studies [16,20] reported the exclusion of patients with smoking habits, one study reported ten smokers and eight non-smokers [21], and the remaining three studies did not report information regarding smoking habits. In all studies analyzing the Khoury technique, the bone grafts were obtained from the mandibular symphysis or the ramus of the mandible. In all studies except one [16], amoxicillin or amoxicillin/clavulanic acid were prescribed following the interventions, and in two studies just ibuprofen was prescribed [16,21].
All studies recorded measurements from CBCT except the study by Urban et al. [16], which used a caliper measuring 2 mm apically from the top of the crest and periapical radiographs. Follow-up was 4 months in the Khoury studies, while it was 6–8 months in studies that analyzed the Urban technique.

Primary outcomes are summarized in Table 3.

From the GBR studies, two of them, Urban et al. and Atef et al. [16,22], reported cases of infection (3.2% and 10% of the patients, respectively), but both cases had an uneventful healing. Meloni et al. [21] observed three cases of membrane exposure (13.6% of the patients) that did not affect the planned treatment and were solved with antiseptic applications. Saravanan et al. [20] did not report any information of possible complications.
One study evaluating the Khoury technique, Bartols et al. [24], reported the complete loss of one bone graft due to an infection (7% of the grafts), and Atef et al. [23] observed one case of a temporary paresthesia that resolved spontaneously after one month.

With the limitations of this systematic review, it may be concluded that both techniques, when performed to achieve horizontal bone gain, have been shown to be effective, with similar complication rates and horizontal bone gain.
The availability of RCTs comparing these techniques specifically is scarce, so it will be appropriate to design comparative studies in future in order to understand implant behavior and marginal bone loss with a longer follow-up.

Data available on request due to restrictions. 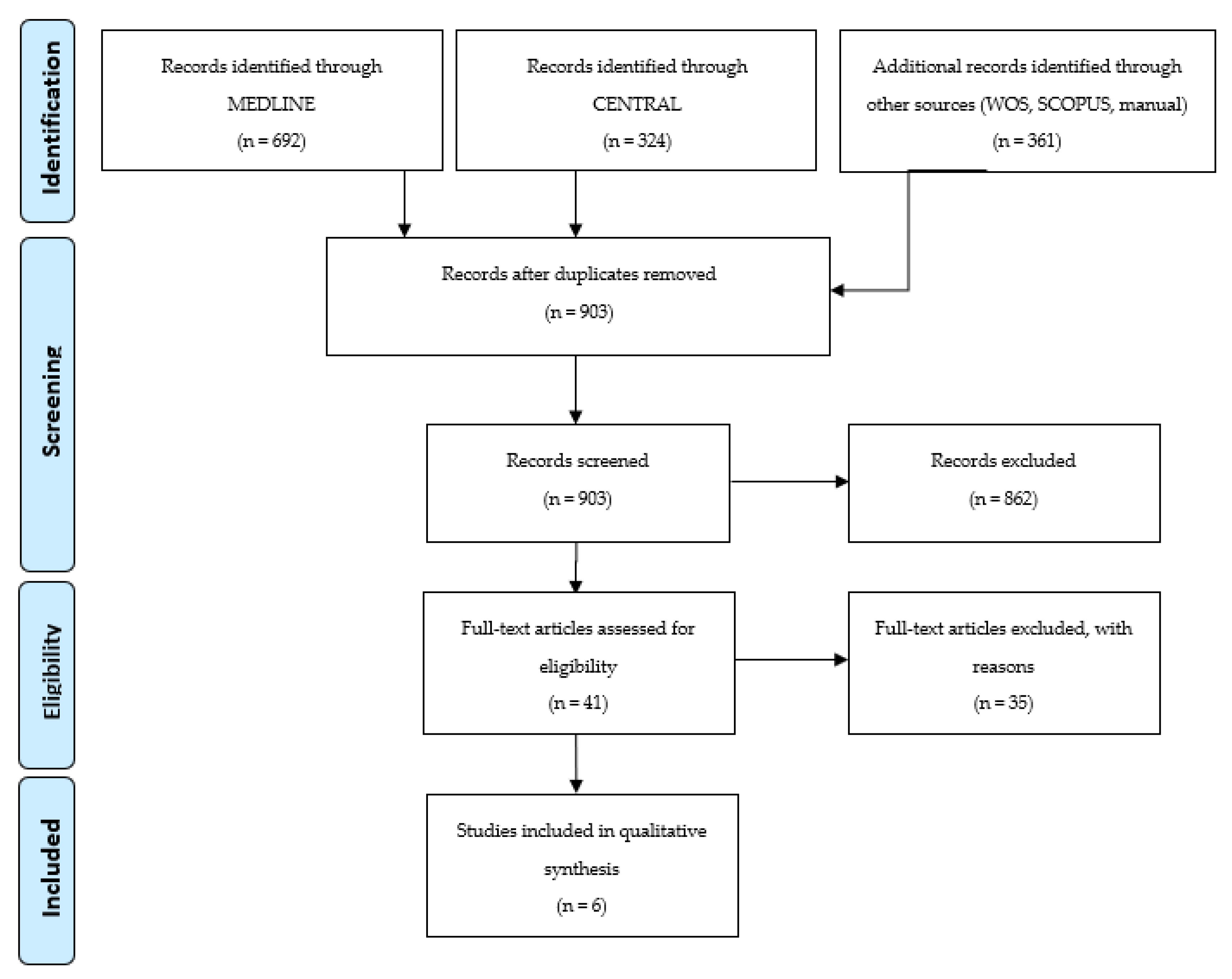