Forensic Anthropology as a Discipline
Previous Article in Journal

Survival Rate and Prosthetic and Sinus Complications of Zygomatic Dental Implants for the Rehabilitation of the Atrophic Edentulous Maxilla: A Systematic Review and Meta-Analysis
Previous Article in Special Issue

Ancestry Studies in Forensic Anthropology: Back on the Frontier of Racism

Within the practice of forensic anthropology ancestry is oftentimes used as a proxy for social race. This concept and its implications were explored via a content analysis (2009–2019) of the Journal of Forensic Sciences. Our findings revealed antiquated views of race based on the trifecta of continental populations (Asia, Europe, and Africa) continue to be pervasive in the field despite scientific invalidation of the concept of race decades earlier. Moreover, our employment of modern geometric morphometric and spatial analysis methods on craniofacial coordinate anatomical landmarks from several Latin American samples produced results in which the groups were not patterned by ancestry trifecta. Based on our findings we propose replacing the assumption of continental ancestry with a population structure approach that combines microevolutionary and cultural factors with historical events in the examination of population affinity.

One of the parameters forensic anthropologists have traditionally estimated is ancestry, which is used in the United States as a proxy for social race. Its use is controversial because the biological race concept was debunked by scientists decades ago. However, many forensic anthropologists contend, in part, that because social race categories used by law enforcement can be predicted by cranial variation, ancestry remains a necessary parameter for estimation. Here, we use content analysis of the Journal of Forensic Sciences for the period 2009–2019 to demonstrate the use of various nomenclature and resultant confusion in ancestry estimation studies, and as a mechanism to discuss how forensic anthropologists have eschewed a human variation approach to studying human morphological differences in favor of a simplistic and debunked typological one. Further, we employ modern geometric morphometric and spatial analysis methods on craniofacial coordinate anatomical landmarks from several Latin American samples to test the validity of applying the antiquated tri-continental approach to ancestry (i.e., African, Asian, European). Our results indicate groups are not patterned by the ancestry trifecta. These findings illustrate the benefit and necessity of embracing studies that employ population structure models to better understand human variation and the historical factors that have influenced it.
Keywords: race; ancestry; population affinity; craniofacial variation; geometric morphometrics race; ancestry; population affinity; craniofacial variation; geometric morphometrics

The sample totals 397 modern adult individuals and includes individuals from Latin America (Chile, Colombia, Cuba, Guatemala, Panama, Puerto Rico, and Peru); and comparative skeletal samples from Spain and enslaved Africans from Cuba were included to explore the effects of colonialism and the Transatlantic Slave Trade on the population structure of the region. Males and females were analyzed separately when this information was available (see Table 1). Some samples were small due to poor preservation in tropical environments. To incorporate all of the observed biological information and to increase sample sizes males and females were pooled as it has been found that sex variation is negligible within each population included in population [22]. Latitude and longitude were recorded based on present-day political boundaries. The sample composition is presented in Table 1.
While we acknowledge the value data collected from such samples continue to contribute to discussions of human variation, it should also be noted that the history and ethics of human skeletal collections, in general, is often dubious. Such body harvesting all too often occurred under the umbrella of scientific racism, without the permission of the deceased or next of kin, and disproportionately targeted marginalized populations.
Sixteen type 1 and 2 standard anatomical craniofacial landmarks (for a total number of landmarks 16 × 3 dimensions = 48) that should reflect the among-group variation were utilized in the analyses (Table 2 and Figure 1). The landmarks selected were those that are of particular interest in forensic anthropology and that would allow for broader shape coverage. To mitigate the effect of small sample sizes, a PCA was used as a dimension-reducing technique and limiting the number of variables [23,24].

Only type 1 and type 2 landmarks were included as they have been found to be reliably reproducible [25]. The landmarks included are those that were found to meet the less than 5 percent error threshold for digitizing and intra-observer error [25]. The coordinate data were collected using a Microscribe G2X digitizer with a reported average error rate of 239 mm [26]. These samples are part of the reference database for the classification software 3D-ID [27] and prior to inclusion in the software, data underwent extensive error checks via mapping (i.e., visualization) of all individuals using the Generalized Procrustes analysis or GPA function in Morpheus et al. [28].

Before statistical analyses can be performed, coordinate data must first undergo a GPA transformation using the software MorphoJ, which is freely available for downloading and developed by Klingenberg [29]. GPA brings all specimens into a common coordinate system, after it translates, rotates, and scales each individual. The advantage of this method is that morphological shape and size can be examined separately, with shape defined as all of the geometric information that remains after the effects of location, scale, and rotational effects are removed [30,31]. Centroid size is defined as a measure of geometric scale that is mathematically independent of shape [31]. To reduce the dimensionality, a principal component analysis (PCA) of the covariance matrix was performed on the GPA-transformed coordinate data and these principal components were utilized for ensuing statistical analyses [31]. A canonical variates analysis (CVA) was performed to examine the most amount of the variation with the least dimensions possible of the a priori groups [29]. A generalized distance measure (or Mahalanobis distance) was used to examine group similarity [29]. A discriminant function analysis (DFA) was performed to visualize morphological variation between the consensus configurations of each group. The phenetic (e.g., morphological) among-group variation was examined using ANOVA for centroid size. Among-group variation for shape was analyzed using MANOVA of the principal components scores derived from MorphoJ. The ANOVA and MANOVA procedures were performed in JMP® Pro 14.1 [32].

Average linkage hierarchical (or agglomerative) clustering was conducted using the generalized distance matrix to examine group similarity [33,34]. The process begins with each population sample in a single cluster, then in each successive iteration, it merges the closest pair of clusters until all the data is in one cluster. The cluster analysis was performed in JMP® Pro 14.1 [32].

Moran’s I, a product-moment coefficient, was used to measure the spatial autocorrelation of shape (PC1 as only one variable can be utilized) and centroid size, which is a measure of genetic similarity between individuals with reference to geographic separation (latitude/longitude). Spatial correlograms were computed to evaluate the spatial autocorrelation coefficients for all pairs of localities at specified geographic distance classes [35], and were performed using the freeware software GeoDa v1.14.0 [36].

The dendrogram produced from the hierarchical cluster analysis using the generalized distance matrix shows two distinct clusters: (1) Chile/Spain and (2) Panama, Cuba, Guatemala, and Colombia which branch off the Chile/Spain cluster. The enslaved African sample clusters with Peru, and Puerto Rico is the most dissimilar. This is further illustrated by the constellation plot (Figure 4), which arranges the samples as endpoints. The length of a line between cluster joints represents the distance between them. The plot shows that the most distinct group is the sample from Puerto Rico, which is three times the distance from the Colombian samples and closest to Peru and enslaved African samples. Chileans and Spaniards are closer to each other than to the rest of the groups.

The spatial autocorrelation for shape (using PC1 accounting for 21 percent of the total variance) and size show that the groups are spatially patterned and heterogeneous indicated by the positive and significant Z-scores (Table 3). While the correlograms show the autocorrelations decreasing with increased distance, the pattern is generally non-monotonic, meaning the pattern is not clinal as would be expected under an isolation-by-distance model such as kinship [35], for both shape and centroid size. Autocorrelations are expected to be positive at closer distances and negative at greater distances (Figure 5). The correlograms do not support a clinal pattern.

In 2000, Smay and Armelagos [2] stated that “it was interesting that the word race was being replaced by the less provocative term ancestry”, while also indicating they doubted that the logic behind race would change and that the analysis of races using exclusive categories based on folk taxonomy would continue simply under a different name—they were right. Ancestry has become a synonym for race. Given our current global political climate, continuing to type individuals in this way lends credence to existing power structures and socioeconomic inequalities. A mere word change is like putting lipstick on a pig, an ineffective attempt at beautifying and obfuscating something whose unsightly features are still evident. We need a fundamental, structural, and thoughtful shift in our paradigm beginning with hypotheses driven by meaningful questions and careful selection of informative characters for investigation. We need a return—or rather, beginning—to investigating real human biological variation.

A.H.R., S.E.W. conceptualized the paper, collected the data, and contributed to writing and editing the manuscript. A.H.R. performed the statistical analyses. All authors have read and agreed to the published version of the manuscript.

Data a contained within the article.

We thank Kate Spradley for providing the Guatemalan sample, and John Fredy Ramirez for access to the Antioquia Modern Skeletal Reference Collection in Medellín, Colombia. We thank Elizabeth DiGangi and Jonathan Bethard for making the Colombian data available and for comments on the manuscript. We also thank Chris Kligenberg for MorphoJ guidance. 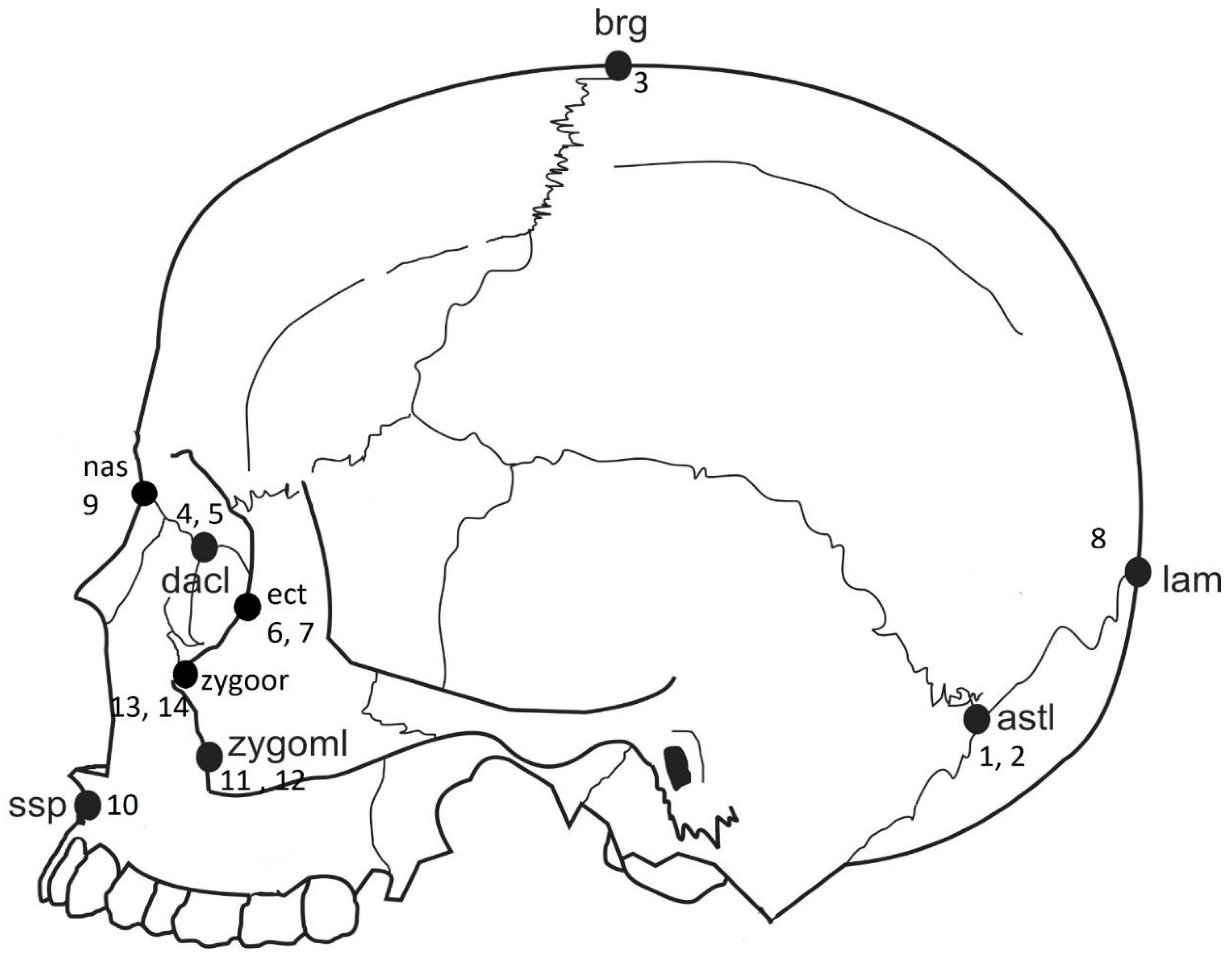