The Evolution of Molybdenum Dependent Nitrogenase in Cyanobacteria

A microdialysis technique was used to monitor acetylcholine levels in the local interstitial fluid in rat submandibular glands, with the aim of determining parasympathetic nerve activity in vivo. The dialysis probe housed a 10 × 0.22 mm semipermeable membrane (molecular weight cutoffs: 50,000 Da). When the probe was perfused at 2 μL/min in vitro, the mean relative recovery of acetylcholine was 41.7% ± 2.5%. The dialysis probes were implanted in the submandibular glands of anesthetized rats and perfusion with Ringer’s solution, at 2 μL/min, was performed. Acetylcholine concentrations in the dialysate were measured by high-performance liquid chromatography and electrochemical detection. The results revealed the following: (1) that mixing Eserine with Ringer’s solution allowed acetylcholine in the salivary glands to be quantified; (2) that acetylcholine concentrations in the dialysate were highly variable and unstable over the first 120 min after probe implantation, but reached a nearly stable level (4.8 ± 2.7 nM) thereafter in the presence of 100 µM of Eserine; and (3) that electrical stimulation of the chorda tympani nerve, or perfusion with high potassium Ringer’s solution, significantly increased acetylcholine concentrations in the dialysate. These results indicate that the present microdialysis technique offers a powerful tool for detecting changes in parasympathetic activity within the salivary glands.
Keywords: salivary gland; acetylcholine; microdialysis salivary gland; acetylcholine; microdialysis

All the animal experiments in the present study were performed strictly in strict accordance with the Guidelines for the Care and Use of Animals for Scientific Purposes at Tokai University (https://www.u-tokai.ac.jp/about/compliance/animal-experiments/guidance/). Approval for the study protocol was obtained from the Animal Investigation Committee of Tokai University (Approval No: 171045, 182019 and 193029).

A linear dialysis probe (OP-100-10, Eicom, Kyoto, Japan) was implanted in the submandibular glands of rats under inhalation anesthesia with nitrous oxide, oxygen, and isoflurane (2%). The semipermeable membrane region (10 mm) of the probe was implanted in the left submandibular gland along the long axis (Figure 1). The probes were perfused with Ringer’s solution at a speed of 2 µL/min by a micro-infusion pump (ESP-32, Eicom, Kyoto, Japan). The Ringer’s solution consisted of 147 mM NaCl, 2.2 mM CaCl2, 4.02 mM KCl, and the cholinesterase inhibitor Eserine (physostigmine; 100 µM). To elicit the release of acetylcholine from the nerve endings, the microdialysis probe was perfused with Ringer’s solution containing a higher than usual amount of KCI (147 mM NaCl, 2.2 mM CaCl2, 100 mM KCl, 100 µM Eserine) (high-K+ Ringer’s solution). The perfused solution was switched to high-K+ Ringer’s solution and back to regular Ringer’s solution by using an SI-60 liquid switch (Eicom, Kyoto, Japan).
Each sampling period lasted 15 min (sample volume = 30 µL), which allowed for the sufficient collection of effluent for a quantitative determination of acetylcholine level. Each 15 min sample was collected in a chilled microtube containing 3 µL of 3 nM IPHC as an internal standard.

The collected solution was subjected to high-performance liquid chromatography (HPLC) with the HTEC-500 (Eicom, Kyoto, Japan) and a platinum electrode (WE-PT, Eicom, Kyoto, Japan). The samples were separated on a polymer-based reverse-phase column (φ 2.0 mm × 150 mm; Eicompak AC-GEL; Eicom, Kyoto, Japan) and then subjected to an enzymatic reaction on an enzyme column (φ 1.0 mm × 4 mm; AC-ENZYM1; Eicom, Kyoto, Japan) at 35 °C and a guard column (for sample, φ 3.0 × 4 mm; PC-03-CH; for mobile phase, PC-04-CH, φ 4.0 × 5 mm). The mobile phase consisted of 5 g/L KHCO3 including 50 mg/L ethylenediaminetetraacetic acid disodium (EDTA·2Na) and 300 mg/L sodium 1-decanesulfonate. The electrode potential was set at +450 mV against a Ag/AgCl reference electrode. The quantification of the collected acetylcholine was evaluated by using a peak area ratio relative to that of IPHC as the internal standard. The data were collected and analyzed using the PowerChrome software (eDAQ, Denistone East, Australia). The present method achieved a detection limit of acetylcholine at 0.05 nM (1 fmol) and a quantitation limit of 0.2 nM (4 fmol) at a signal-to-noise ratio of 3. The quantification of the collected acetylcholine was evaluated with the IPHC peak area as the internal standard.

The chorda tympani nerve was exposed and stimulated electrically to induce the release of acetylcholine from the parasympathetic nerve end [17,24]. A pair of stimulation electrodes (stainless wire 0.5 mm in diameter, 5 mm interpolar distance) was settled on the nerve. Square-wave pulses of 5 msec in duration and 1.5–2.0 V in intensity were applied as electrical stimuli at frequencies of 20 Hz using an electronic stimulator SEN-3201 (Nihon Koden, Tokyo, Japan).

The results given represent the mean and standard deviation (SD) of the results. A statistical analysis software package (GraphPad Prism, version 6.0c, GraphPad Software, San Diego, CA, USA) was used to compare across the experimental conditions. Dunn’s multiple comparison test was used to determine significance at each time point when a significant difference among acetylcholine levels after perturbation was obtained by means of a two-way (drugs and time) repeated-measures analysis of variance (ANOVA). A p-value of less than 0.05 was considered to indicate a statistical significance.

3.2. Effect of Eserine on Basal Level of Acetylcholine

3.3. Time Course of Dialysate Acetylcholine Levels after Implantation of Probe

Figure 4 shows the time course of the change in acetylcholine level in the dialysate collected at 15-min intervals over a period of 360 min in the presence of 100 µM Eserine. The acetylcholine levels were highly variable and unstable over the first 120 min after implantation of the probe, but showed a gradual decrease to basal level (4.9 ± 2.2 nM) and a stable state (4.8 ± 2.7 nM) thereafter.

The study was funded in part by grants from JPSP KAKENHI; grant number 18K09514.

The study was conducted according to the guidelines of the Declaration of Helsinki, and approved by the Animal Investigation Committee of Tokai University (Approval No: 171045, 182019 and 193029).

For this type of study, formal consent is not required.

The data that support the findings of this study are available from the corresponding author, [M.Y.], upon reasonable request.

The authors would like to thank Jeremy David Williams, Tokyo Medical University, for his assistance with the English of the manuscript. The authors also thank Kazuko Ikimura, Eicom Corporation, for technical support.

All authors, Masanobu Yoshikawa and Mitsuru Kawaguchi, declare that they have no conflict of interest. 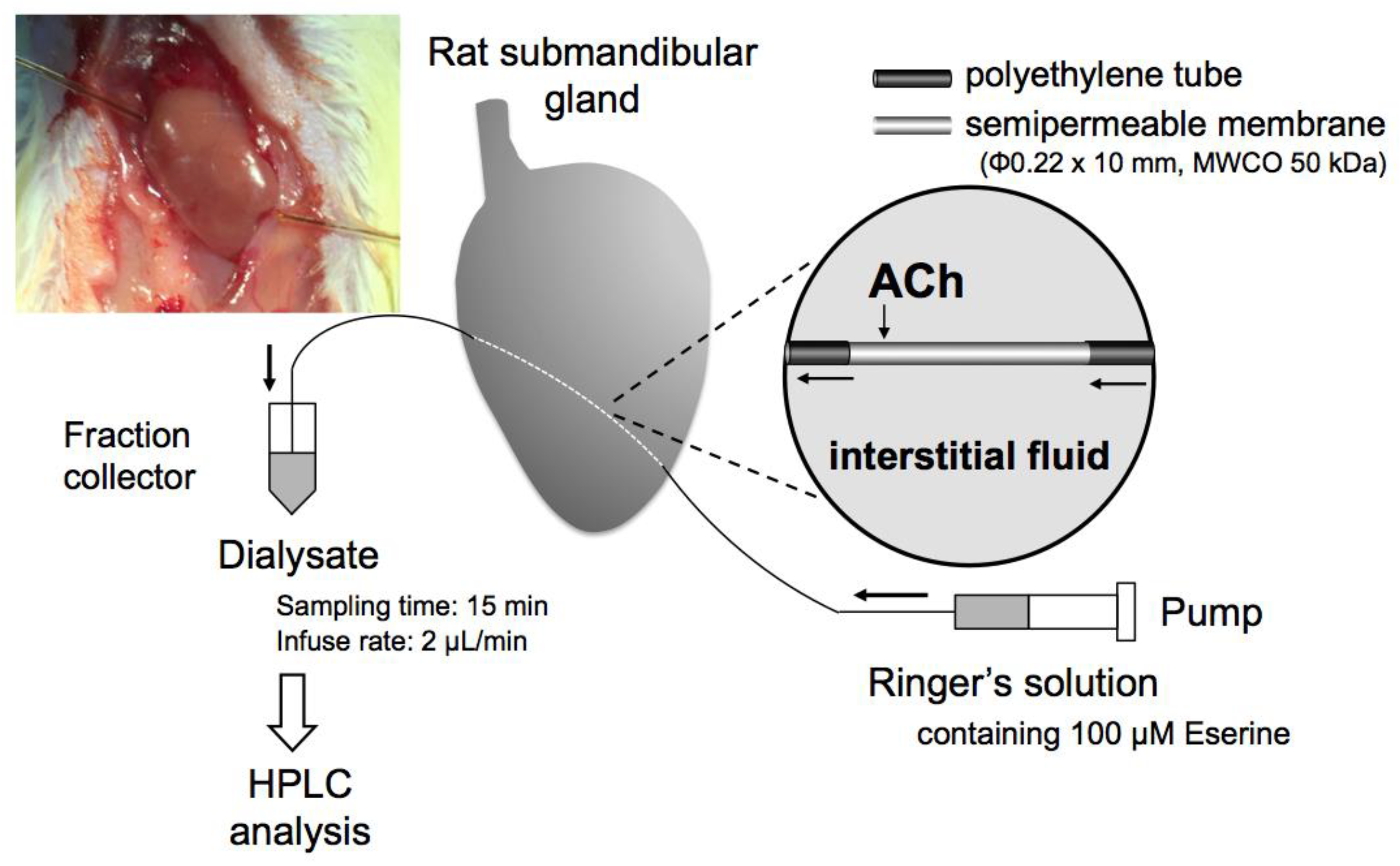 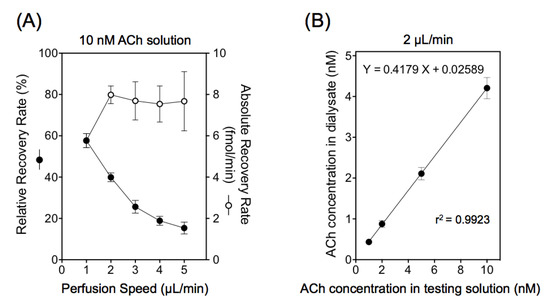 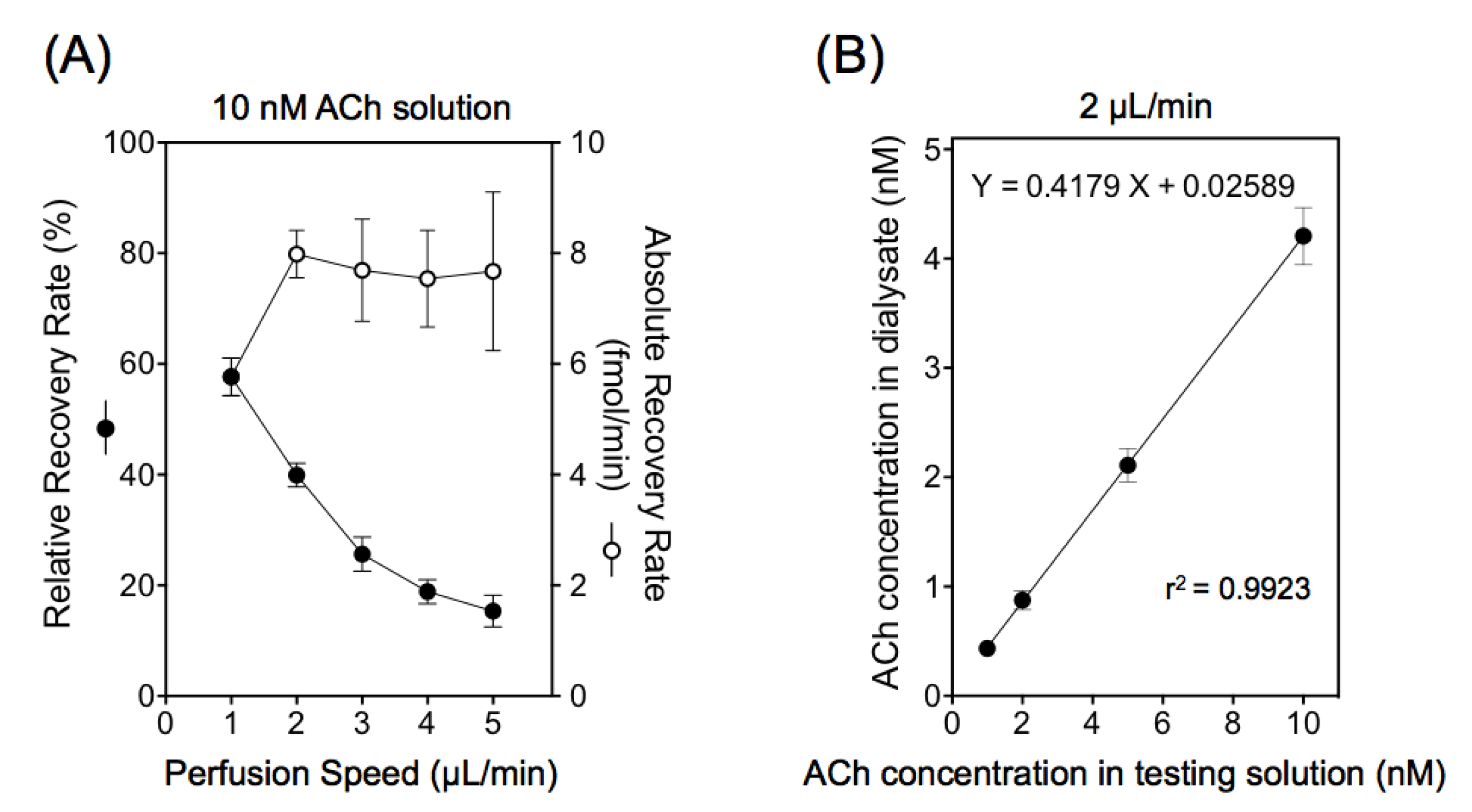 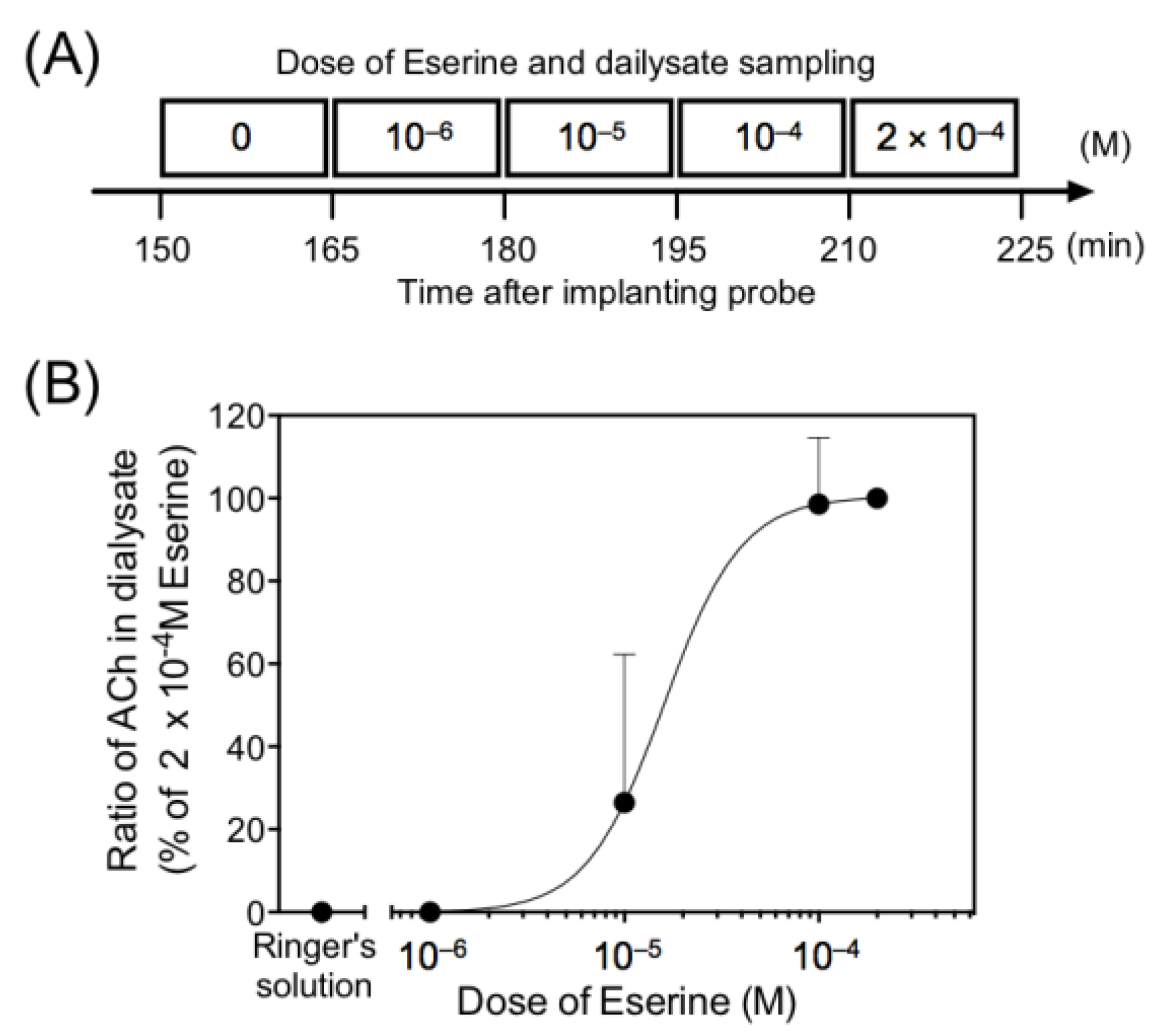 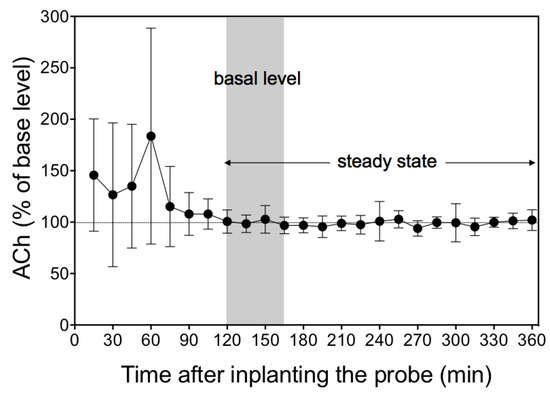 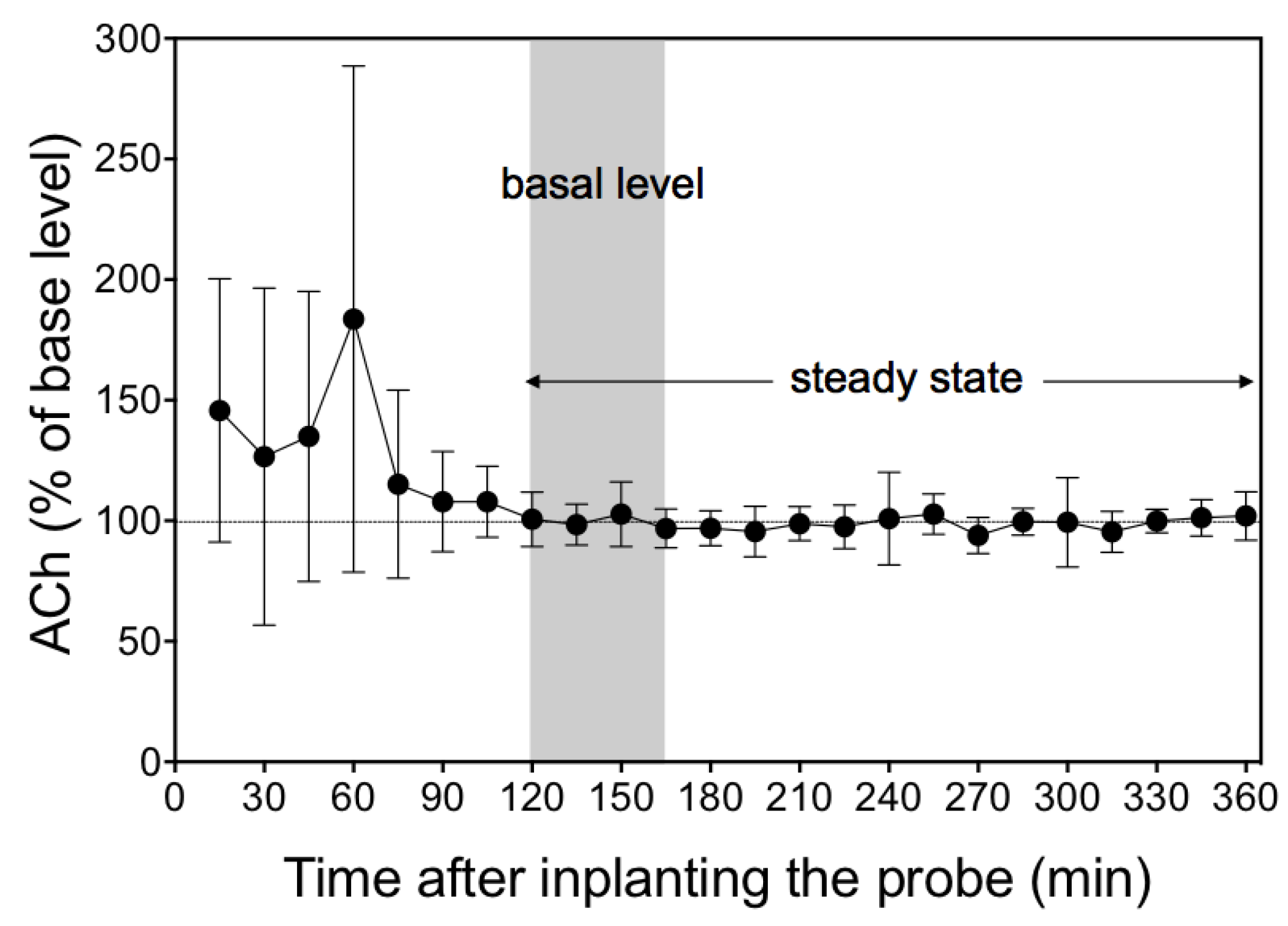