:
The fast and precise fabrication of three-dimensional (3-D) structures made of nanofibers is an important development trend in the electrospinning technique. This paper describes a new and facile method of electrospinning to fabricate nanofibrous 3-D structures. The nanofibrous 3-D structures can be engineered to have the desired layer thicknesses, where the fiber spacing, density (i.e., fiber volume/unit volume), as well as shape of the structure may be controlled. While innumerable structural variations are possible with this method, this paper discusses, as proof-of-concept, a few cases that illustrate how 3-D nanofiber webs can be made for filtration application. Computerized automation of the method will make it possible to build almost any 3-D web structure suitable for a myriad of applications including ultra-light-weight insulation and scaffolds for hydrogel preparation and tissue.
Keywords:
nanofibers; electrospinning; 3-D structure; filtration 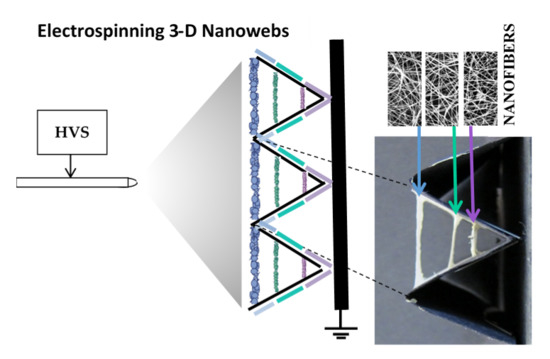 2.1. Preparation of Polymer Solution for Electrospinning

Industrial-grade powdered poly(ethylene oxide) (PEO, molecular weight of 6 × 105 g/mol) and Triton X-100, a non-ionic surfactant, were purchased from Sigma Aldrich, (St. Louis, MO, USA). ARCON® S, soy protein concentrate (SPC) in the form of powder, was obtained from Archer Daniels Midland Company (Decatur, IN, USA). SPC contained approximately 72% protein, 17.5% carbohydrates, 5% ash, and 4.5% fiber and was used as received.
SPC and PEO polymer solutions were prepared individually. In the first step, SPC, which has an isoelectric point at about pH 4.5, was dissolved in deionized water and the solution pH was adjusted to 11 using NaOH while being heated at 60 °C for 30 min. Under these pH and temperature conditions, SPC dissolved easily and formed a transparent solution. The solution concentration for SPC was kept at 7 wt. %. In the second step, a predetermined amount of PEO was added to deionized water at room temperature (RT) until the polymer was fully dissolved to obtain the solution with a concentration of 5 wt. %. Thereafter, the individually prepared solutions were mixed together with a volume ratio of 1.5/1 (SPC/PEO) and stirred at RT for 2 h. Triton X-100, 1% (by wt. of SPC + PEO), was added to final solution as a non-ionic surfactant. The final ratio of SPC/PEO in the resulting polymer solution was SPC/PEO (2.1/1).

It should be mentioned here that the experiments described above were done by moving the blades manually, in individual steps, to obtain variations B, C, and D. However, precise placement of the metal blades can be easily controlled by computer and precision motors, such that nanofiber bridges can be built with any desired spacing between them. Furthermore, by moving the metal blades in a continuous fashion, nanofiber formation can occur without the apparent separation of the layers. A slower movement of the metal plates will build denser nanofiber layers, whereas faster movement can build nanofibers with lower density (weight/unit space). In summary, automation in moving metal blades could easily achieve the desired nanofiber density, direction, and locations with high precision.
In another situation, many metal blades may be placed behind the substrate simultaneously, and by providing a sequential voltage connection to the blades on both sides of the V-shaped substrate slowly and simultaneously from the bottom to top of the ‘V’ with the help of three high voltage sources (HVSs), the nanofiber deposition location can be moved from the bottom to the top. Figure 12 shows the schematic of such an arrangement with three metal blades placed behind the V-shaped substrate. However, ideally, this may also be achieved using only 1 HVS and by using a switch that connects different metal blades.
In another refined variation, a single set of blades on either side of the V-shaped substrate can be moved upwards starting from the bottom position for a continuous buildup of nanofibrous 3-D structure. This version would require only one HVS and the blades’ movement can be computer controlled. If the blades were moved faster, lesser amount of nanofibers would get deposited (i.e., lower density) per unit area (or unit volume within the ‘V’ space) if the deposition rate (i.e., polymer flow rate) was kept unchanged. If the blades were moved slower, a higher density of nanofibers could be obtained through the same volume. The blade motion could also be varied along its upward path, as desired. Further, if the blades were to move in the opposite directions (or by moving only one blade while keeping the other at one location without moving), the nanofiber directions or angle they make with the walls of V-shaped substrate could also be changed. Thus, computer controlled blade movements could allow enormous possibilities for nanofiber laying within the substrate space.
In many cases, the fiber diameter may need to be varied through the thickness of the nanofiber web. Varying of fiber diameter may be achieved through individual layers or continuously through the thickness (layers) by changing the voltage used or by using different voltages if more than one HVSs are used. Other common variables such as the electrode to collector distance or concentration of polymer solutions could influence fiber diameter as well [32]. The nanofibrous 3-D web structure consisting of larger diameter of fibers in front and smaller diameter at the base could also be an ideal material for filtration. This may even eliminate the need for using the bilayer (substrate + nanofiber membrane) structure of the filters, as is the current practice [33,34].
The present method may also be modified where electrospinning is done using a drum as the electrode (instead of needle) but the collector system is maintained as described in the paper. A higher electrospinning speed because of the drum would make it easier to scale up this method to a commercial level to produce 3-D sheets.

The filter quality factor is a useful standard for comparing different types of filters and depends on many factors that include a filter’s packing density, the fiber diameter, and others [35]. Quality factors of nanofibrous filters and multi-layer fibrous filters have been examined by a few researchers [33,34,35,36,37]. For example, Podgorski et al. [34] investigated the filtration performances of some bilayer structures consisting of a microfibrous support and a nanofibrous facial collection layer. The nanofibrous layers were fabricated by the meltblown method. They found that the quality factors of the micro/nanofiber filters were significantly higher than conventional HEPA filters for 300 nm particles. They also studied the effect of adding more nanofiber mats to the bilayer structure. Results showed that the multi-nano/single-micro structure was beneficial and improved the filter quality factor significantly. Specifically, for 300 nm particles, the filter quality factor rose from 0.004 Pa−1 for one micro/nanofiber filter to 0.006 Pa−1 for an additional layer of the same nanofiber mat [34].
Zhang et al. [25] also found out that the filtration performance of nanofiber filters was significantly improved by using multiple thin layers of nanofiber mats. Stacking multiple thin layers of nanofiber mats benefited from the compensation of the inferior parts in each nanofiber mat and kept a high filter quality. The sandwiched multilayer nanofibrous media resulted in a quality factor better than the HEPA filter and military standard tested under the exact same conditions. The present study has shown a novel way of adding nanofiber layers separately or in a continuous form. Either way, the quality factor of the filters can be enhanced significantly.
Nanofibrous 3-D structures would also be ideal for tissue scaffolding, where different fiber densities and fiber diameters in different layers would mimic the tissue structures. Ki et al. [38] have discussed various 2-D and 3-D scaffolds whose cell adhesion and proliferation abilities were assessed by cultivating mouse fibroblasts. While the 2-D nanofiber mat exhibited excellent cell adhesion and proliferation abilities, significant cell migration was not possible because the spaces were too small. Authors showed that mouse fibroblast cells adhered and proliferated within 3-D nanofiber foam, having large amount of space, far better and with ease [38]. A similar porous structure can be easily built using the new 3-D method developed in this study.

This paper presents a new and facile method of electrospinning for creating nanofibrous 3-D structures and provides a proof-of-concept for the method. The new method allows electrospinning nanofibers to form 3-D web-like structures of desired thicknesses, where the fiber spacing, density (i.e., fiber volume/unit volume), as well as shape of the structure may be controlled. Additionally, it should be possible to vary the fiber diameters through the thickness of the 3-D web structure by controlling the variables such as the polymer solution (e.g., concentration, solvent evaporation), melt viscosity (e.g., temperature, molecular weight of polymer), or flow rate while building the nanofibrous 3-D structure.
The new technique presented here can also be used in a myriad of applications other than air filtration where nanofibrous 3-D structures would be highly beneficial. These include tissue scaffolding for building artificial skin and other organs, deep wound healing, ultra-light-weight insulation, hydrogel preparation, and many others.
While many variations are possible with this novel method, this paper discusses a few cases, as proof-of-concept, that illustrate how multilayered nanofibrous 3-D structures can be made, particularly for application in air filtration. The computerized automation of the method should make it possible to build a myriad of structures suitable for a variety of applications.

D.L. planned and did all experiments as well as prepared the first draft of manuscript. A.N.N. did planning, supervision, and worked on the manuscript. All authors have read and agreed to the published version of the manuscript. 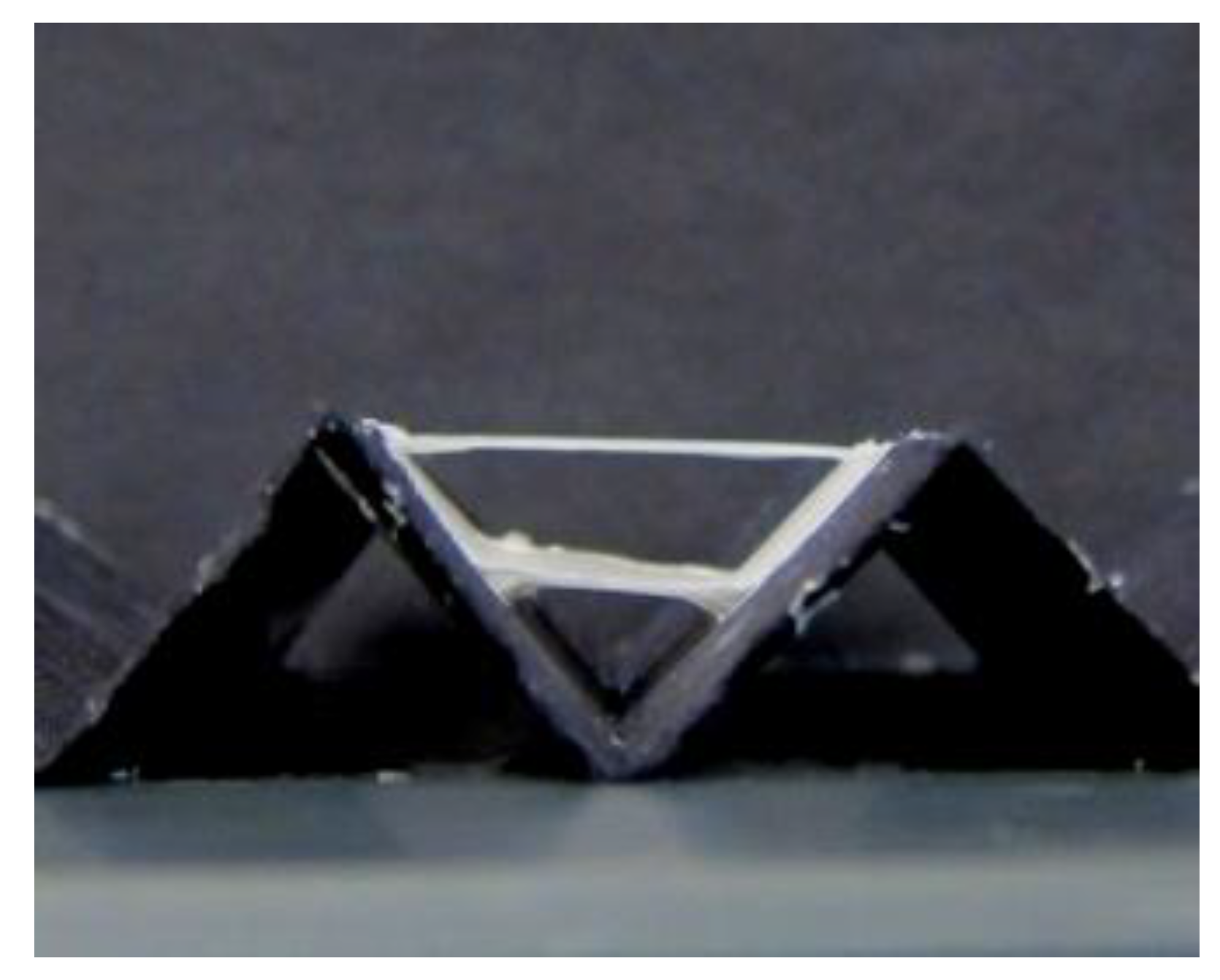