Multi-Analytical Approach for Asbestos Minerals and Their Non-Asbestiform Analogues: Inferences from Host Rock Textural Constraints
Next Article in Special Issue

:
Intraply hybrid green composites were prepared by film stacking and hot-pressing of bio-based polyamide 11 (PA11) sheets and commercial hybrid fabrics made by interweaving flax and basalt fibers (2/2 twill structure). Two matrices were considered, one of them containing a plasticizing agent. After preliminary thermal and rheological characterizations of the neat matrices, the laminates were studied in terms of flexural properties at low and high deformation rates, and the results were interpreted in the light of morphological analyses (scanning electron and optical microscopy). Despite the poor interfacial adhesion detected for all investigated composite samples, the latter exhibited a good combination of flexural strength, modulus, and impact resistance. Such well-balanced mechanical properties make the studied samples potential candidates for semi-structural applications, e.g., in the transportation sector.
Keywords:
polyamide 11; interweaving flax-basalt fibers; hybrid composites; flexural properties

In the last decades, a steady increase of interest has been devoted toward the design and development of hybrid composite systems given their outstanding perspectives of applications, even for advanced uses, deriving from the ability to combine advantages of the individual constituents, for example, stiffness and toughness, and the occurrence of synergisms, not yet well understood [1,2,3,4].
In line with the general trend to use reinforced plastics for both functional and structural applications, the hybridization approach, mainly obtained by embedding two or more different fibers within a polymer matrix, allows to tailor the properties of products to suit ever more specific requirements. In this regard, common configurations consist of different kinds of fibers distributed in different laminas or in the same one to form interply or intraply hybrids, respectively [5,6].
Gonzales et al. [7] focused on the low-velocity impact behavior of polymer-based interply hybrid laminates including woven carbon fabric, woven glass fabric, and unidirectional carbon tapes. Authors demonstrated that the stacking sequence of constituting layers can significantly affect results and failure mechanisms. In particular, the dissipation of impact energy is reduced when the woven fabrics are placed in the mid-plane of the studied composite structure, with a simultaneous increase of the residual properties. Ying et al. [8] studied the influence of hybridization on the impact properties of carbon-aramid/epoxy systems. Experimental tests highlighted that placing a high stiffness carbon fabric in correspondence of highly resistant regions permits to achieve enhanced properties of the reinforcement. Ferrante et al. [9] considered the effect of basalt fibers hybridization on the damage tolerance of carbon/epoxy laminates subjected to laser shock wave tests. The research indicated an optimal behavior for sandwich-like configurations, especially in the case of structures with basalt skins. Nisini et al. [10] analyzed ternary systems including carbon, basalt and flax fibers in an epoxy matrix obtained according to two different configurations. Samples were subjected to tensile, flexural, interlaminar shear strength and low-velocity impact tests. The inclusion of flax fibers showed a significant effect especially with regard to impact response of investigated materials.
Nowadays, the growing sensitivity towards environmental issues has increasingly moved the attention of researchers and industrials towards inherently recyclable materials and/or based on constituents coming from renewable sources. According to this consideration, the use of eco-sustainable thermoplastic resins and natural reinforcements is rapidly gaining a significant role even in industrial fields where the use of traditional carbon fiber- and glass fiber-reinforced thermosetting materials is widely established (aeronautics, naval, construction). Unfortunately, both natural fibers and low environmental impact plastics often suffer from poor performance, and their combination consequently results in “green composites” that do not meet the necessary requirements for many technologically relevant applications. The challenge is identifying new combinations of raw materials for the production of green composites whose performance is good enough to propose their use in suited applications. Among the various bio-based thermoplastic resins here we focus our attention on polyamide 11 (PA11), which is a semi-crystalline bio-polyamide produced using 11-aminoundecanoic acid derived from castor oil. Despite its relatively high costs, in the last decade, PA11 has gained a special industrial interest due to a good combination of mechanical properties and chemical resistance. In particular, PA11 exhibits good toughness compared to other bio-based thermoplastic resins, e.g., poly(lactic acid), which is often proposed as a matrix for bio-composites [11,12,13,14,15]. As far as the fibers are concerned, here we deal with a hybrid fabric made of basalt and flax interwoven fibers in 2/2 twill structure. This class of reinforcements has gained over time an extraordinary interest in research, as their use in polymeric matrices can offer different possibilities from the triggering of synergisms to mechanical properties not exhibited by composite materials similar but reinforced with each of the two combined fibers, separately [16,17,18]. The mechanical performance of composite laminates obtained by film stacking is investigated in both static and dynamic conditions. The results, appropriately supported by a morphological investigation of the induced damage, reveal a good combination of flexural properties and toughness, which suggest possible use in semi-structural applications, such as panels for the transportation field.

Films with a thickness approximately equal to 80 μm were prepared using a Collin flat die extruder Teach-Line E20T equipped with a calender CR72T (Collin GmbH, Ebersberg, Germany). In detail, filming was conducted at a screw speed of 60 rpm, setting the temperature profile along the screw at 170–210–220–220–200 °C.
Composite laminates were obtained by the film stacking technique according to which PA11 films and hybrid fiber fabrics were alternately stacked and hot-pressed with a lab press Mod. P400E (Collin GmbH, Ebersberg, Germany) under pre-optimized conditions with a maximum temperature of 225 °C. The molding cycle is shown in Figure 1.
Operating in this way, laminated samples were prepared by stacking four plies with plastic films. The final samples had a thickness approximately equal to 1.95 mm and volume fiber content of about 34%.

Differential scanning calorimetry (DSC) tests have been performed using a Q20 (TA Instruments, Milan, Italy) set-up on films of investigated matrices, at a rate of 10 °C/min and on the temperature range from 0 °C to 250 °C. The collected data permitted to assess the glass transition temperature of matrices and their degree of crystallinity according to the following Equation (1): where ΔHm is the measured melting enthalpy while ΔHm0 is the melting enthalpy of the PA11 fully crystallized (189 J/g) [19].

The flow behavior of the polymer matrices was investigated through rotational rheometry using a stress-controlled rotational rheometer (AR-G2 by TA Instruments) (Milan, Italy). Oscillatory shear experiments (frequency scans) were carried out to get the elastic (G’) and viscous (G’’) moduli in the linear viscoelastic regime, whose limits were assessed through preliminary strain amplitude shear tests. The frequency scans were performed in air atmosphere from frequency ω = 102 rad/s down to ω = 10−1 rad/s. The strain amplitude was γ = 5% for both PA11 TL and PA11 P40 TL resins. The testing temperatures were T = 220 °C for the PA11 TL and T = 205 °C for the PA11 P40 TL. This enabled to compare the rheological behavior of the two matrices at the same reduced temperature θ = Ttest–Tm-c ≈ 10 °C (Tm-c being the temperature of melting peak closing). Note that lower temperatures were not explored because of the excessive viscosity of the selected matrices.

Morphological analysis was conducted on cryo-fractured surfaces of composite samples to highlight any interfacial feature useful to support mechanical results. In this regard, observations were captured with a field emission scanning electron microscope (mod. FEI QUANTA 200 F) (Zurich, Switzerland) operating in high vacuum conditions at the voltage of 20 kV. Analyzed surfaces were previously coated with a thin layer of a gold-palladium alloy.

Tensile and flexural tests were conducted with a Tensometer 2020 (Alpha Technologies, Cinisello Balsamo, Milan, Italy).
In particular, tensile measurements on the neat polymer matrices were performed on dog-bone shaped specimens, obtained by compression molding, according to the ASTM D638-14. Five specimens were tested at room temperature, with a displacement rate of 5 mm/min and using a load cell of 10 kN.
Flexural tests were carried out on both neat matrices and laminates. The measurements were performed loading each specimen up to 5% of strain, according to the ASTM D790-03, by using a load-cell of 500 N. The reported results represent average values computed from five independent measurements per each sample.

High-velocity flexural properties of the laminates were estimated by means of an instrumented Charpy impact testing machine CEAST 9500 (ITW Test and Measurements, Pianezza, Turin, Italy). Three-point bending tests were performed on five specimens with a length approximately equal to 100 mm and using a span width of 62 mm, at a load application speed of 3.8 m/s. Results are reported in terms of stress-deformation curves.

Hybrid composite laminates constituted by embedding an interweaved flax and basalt fibers fabric in two polyamide 11 resins, pure and plasticized, were prepared by film stacking and hot-pressing techniques under processing conditions preliminarily optimized by thermal and rheological analyses of the matrices. Specimens of appropriate size, cut from both pure matrix sheets and composite laminates, were subjected to mechanical tests. Specifically, pure resin specimens were studied by quasi-static tensile and flexural tests, while composite specimens were subjected to flexural measurements carried out at both low and high strain rate.
The plasticized matrix exhibited lower stiffness compared to its not plasticized counterpart, but its toughness was more than 50% higher. SEM investigations highlighted a poor polymer-fibers interfacial adhesion in both composites, with detrimental effects in terms of stress transfer ability, but with possible benefits in terms of dissipative phenomena under large deformations. The latter were explored through flexural tests performed at both low and high velocity. When tested under quasi-static conditions, the composites exhibited flexural stiffness and strength higher than those reported in the literature for green composites, and comparable with those of glass-fiber reinforced laminates. Good flexural properties were maintained even under high-velocity conditions, especially for the sample with a plasticized matrix. Overall, the present study demonstrates the suitability of the investigated green composites based on hybrid reinforcement for the manufacturing of items that must meet at least semi-structural requirements, e.g., for panels in the transportation field. 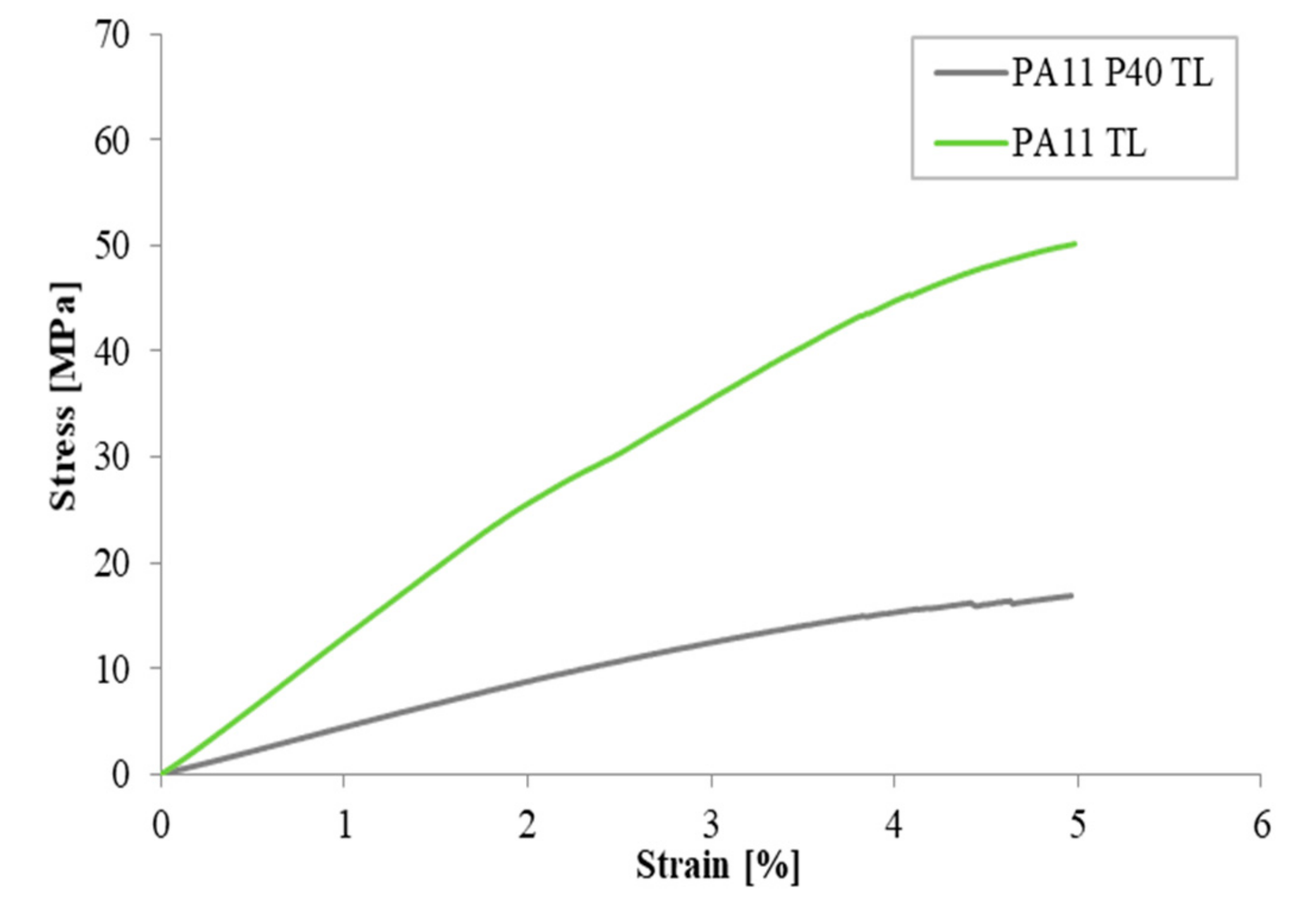 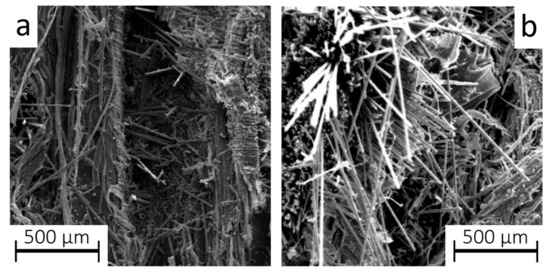 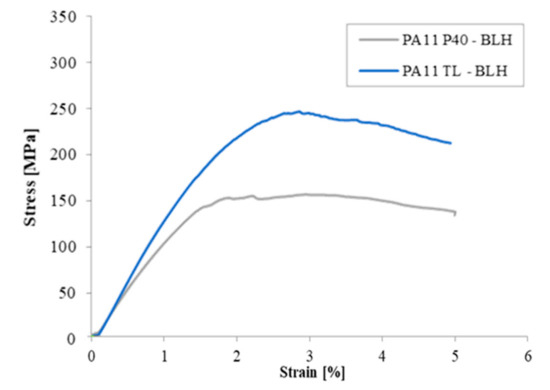 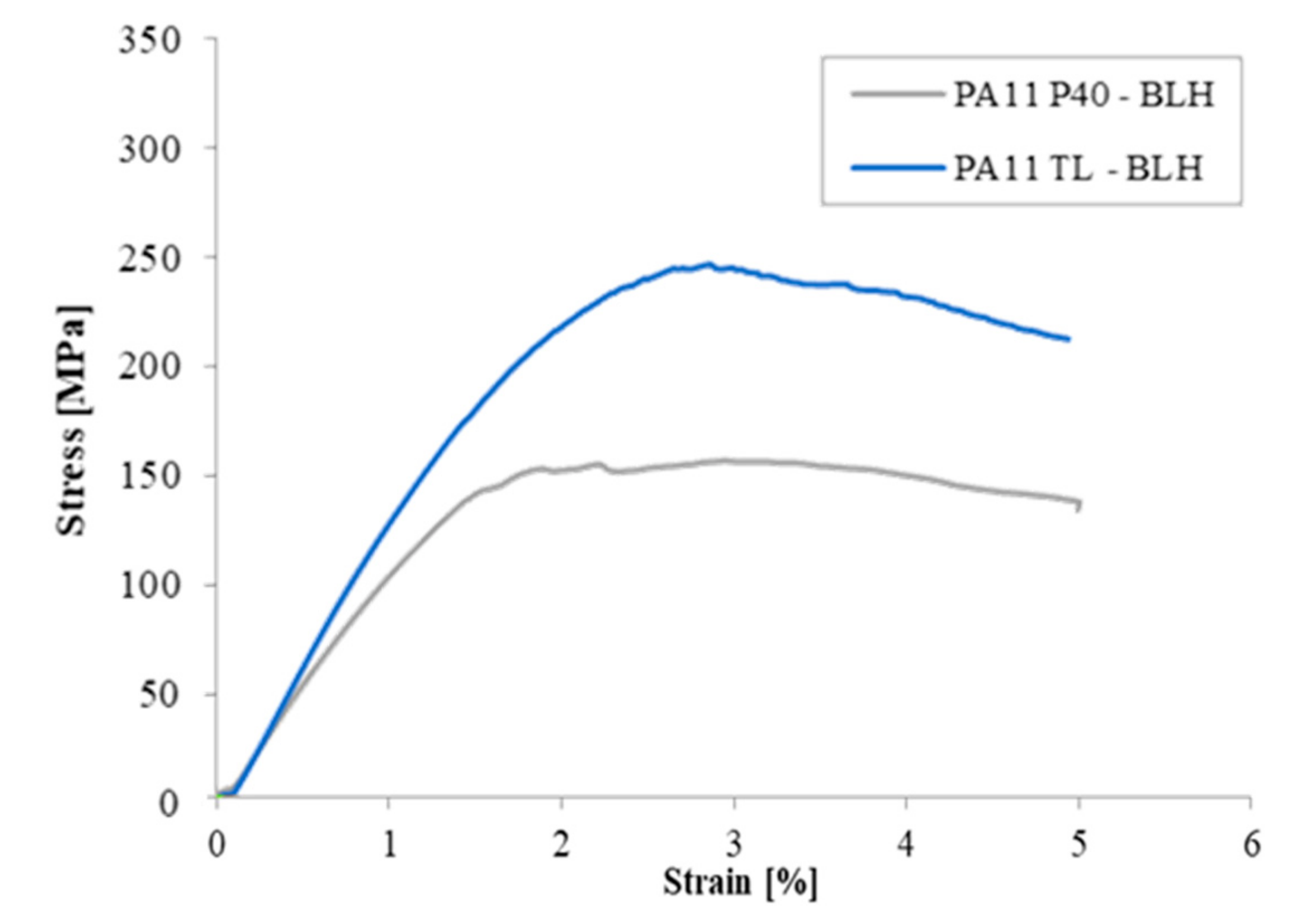 Table 4. Flexural parameters of PA11 based composites.
Table 4. Flexural parameters of PA11 based composites.
© 2019 by the authors. Licensee MDPI, Basel, Switzerland. This article is an open access article distributed under the terms and conditions of the Creative Commons Attribution (CC BY) license (http://creativecommons.org/licenses/by/4.0/).
We use cookies on our website to ensure you get the best experience. Read more about our cookies here.
Accept
We have just recently launched a new version of our website. Help us to further improve by taking part in this short 5 minute survey here. here.
Never show this again