Noble metal nanoparticles in solution and deposited as thin films have attained wide popularity in the last 10 years and aroused intense research interest in nanotechnology due to their well-known properties, such as good conductivity, localized surface plasmon resonance (LSPR), and antibacterial and catalytic effects [1,2,3,4]. They are used in many different areas, such as medicine, solar cells, nano- and microelectronics, scientific investigations [5]. Films based on noble metals are the object of intense investigation due to the optical properties introduced by the characteristic LSPR, which generates an optical local field enhancement. This collective coherent oscillation of electrons on the conductive band of metallic nanoparticles interacts with the electromagnetic field and produces a strong absorption in particular regions of the electromagnetic spectrum. In particular, silver nanoparticles can absorb light in the near UV region of the spectrum extending their wavelength response to visible light. Other metal nanoparticles than noble metals also show absorption in visible light, such as Cu and Al [6,7], but their LSPR is weak and suffers from relatively easy oxidation. The most intensely studied plasmonic nanoparticle materials are Au and Ag. Ag is cheaper than Au and presents an even stronger LSPR, making Ag nanoparticles good candidates for many different applications. They can be used for enhancing solar cell efficiency by means of light trapping in organic as well as inorganic solar cells [8,9] or they can be used together with TiO2 to improve its photocatalytic activity. These nanoparticles produce an increased absorption in the visible region due to their aforementioned LSPR [10]. The very high electric field around the nanoparticles makes them very good candidates for enhancing the signal of Raman scattering spectroscopy (SERS) [11,12], luminescence, and cathodoluminescence [13,14].
A wide range of techniques for producing nanoparticles is used in the literature, and can be roughly classified into two groups based on chemical or physical processes. The most popular method is chemical reduction, whereby organic or inorganic agents are used to reduce Ag salt and generate nanoparticles with different sizes, shapes, and composition [15,16,17,18,19]. Most of these methods use chemical reactants, surfactants, or stabilizers which contaminate the final nanoparticles, necessitating further extraction and purification [17]. It is worth pointing out that this is one of the main issues with nanoparticle technology. Physical processes, on the contrary, use metallic precursors and allow nanomaterials to be obtained without the presence of chemical reagents, but size and shape control is challenging. Among the physical techniques, laser-based ones have been used extensively. In particular, pulsed laser ablation in liquid (PLAL) is one of the most promising techniques to produce very pure nanoparticles. Indeed, it avoids surfactants and reaction products in solution. In PLAL, a high fluence laser pulse impinges on a solid substrate immersed in liquid. Plasma plume is formed and expands into liquid. The rapid cooling realizes nanoparticles in liquids. In previous works, we have obtained ceramic and metal nanoparticles in water and in open air [20,21,22,23,24]. Moreover, nanoparticles obtained by PLAL are charged and, once synthesized in solution, can be electrodeposited in a suitable substrate. There are different methods for nanoparticle deposition, such as chemical vapor deposition (CVD), physical vapor deposition (PVD), pulsed laser deposition (PLD), and sputtering. While most of these require sophisticated and expensive equipment [23,24,25], electrophoretic deposition (ED) is a simple and low-cost technique for nanomaterial deposition. This method has already been used to deposit Ag nanoparticles prepared by chemical methods [26]. It allows the synthesis parameters of nanoparticles to be controlled and incorporated into materials, which enables materials to be obtained and fabricated with tailored properties.
In this work, we report the results of combining the PLAL with ED technologies to obtain films of Ag nanoparticles deposited on a substrate. By combining a synthesis technique and a deposition method, Ag nanoparticles are produced and deposited in one step. This process will have great advantages in terms of costs and time, allowing a spread use of the combined technique.

Plates of Ag of 99.99% purity were cleaned and sonicated for ablation by laser in water. The targets were attached to the bottom of a glass box and filled with distilled water up to 1.0 mm over the upper surface of the Ag plate. The Ag targets were used as positive electrodes while a substrate of Si separated 2.5 cm was used as negative electrodes, as shown in Figure 1.
The laser source used consisted of a pulsed diode-pumped Nd:YVO4 laser (Rofin, Hamburg, Germany). It provides laser pulses at 532 nm with pulse duration of 14 ns, a repetition rate of 20 kHz, and an average output power of 6.0 W. The Ag was ablated in water while an electric field of 15 V was applied between the electrodes.
Scanning electron microscopy (SEM) was used to observe and analyze the surface morphology and the microstructure by means of a JSM-6700 field emission scanning electron microscope (JEOL, Tokyo, Japan). Transmission electron microscopy (TEM), selected area electron diffraction (SAED), and high-resolution transmission electron microscopy (HRTEM) images were taken on a JEOL JEM-2010 FEG transmission electron microscope equipped with a slow digital camera scan, using an accelerating voltage of 200 kV, and provided by an energy dispersive X-ray spectrometer (EDS) to reveal their crystallinity and composition. The optical absorption of Ag nanoparticles deposited on the glass was measured by UV-Vis in a Hewlett Packard HP 8452 spectrophotometer (San Jose, CA, USA) in the wavelength range of 190–800 nm in a 10 mm quartz cell. Electron energy loss spectroscopy (EELS, JEOL, Tokyo, Japan) was carried out in order to check the potential presence of oxygen in the synthesized and deposited nanoparticles.

In summary, we have synthesized silver nanoparticles and deposited them on Si substrate in a one-step process by combining the techniques of laser ablation of solids in liquids and ED to obtain uniform films. The silver target submerged in water was connected to the positive electrode and separated 2.0 cm from the cathode. The resulting nanostructured silver films consisted of homogenous coatings composed of irregular nanoparticles with slight slits among them. These films can be used to enhance the efficiency of photovoltaic devices, photocatalysis, or SERS.

The technical staff from CACTI (University of Vigo) is gratefully acknowledged. 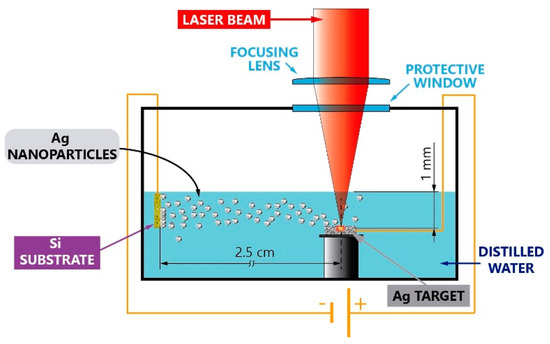 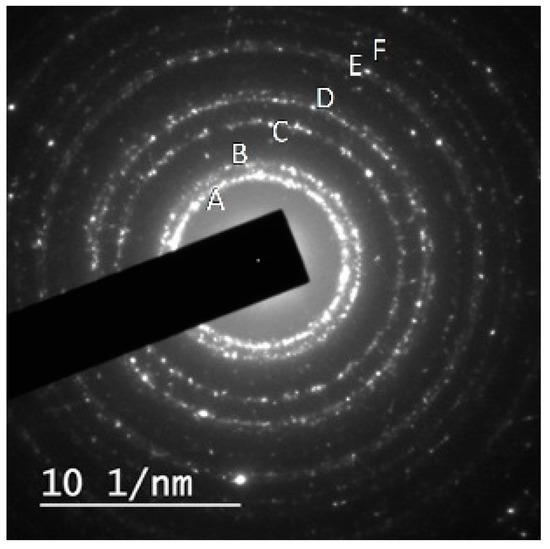 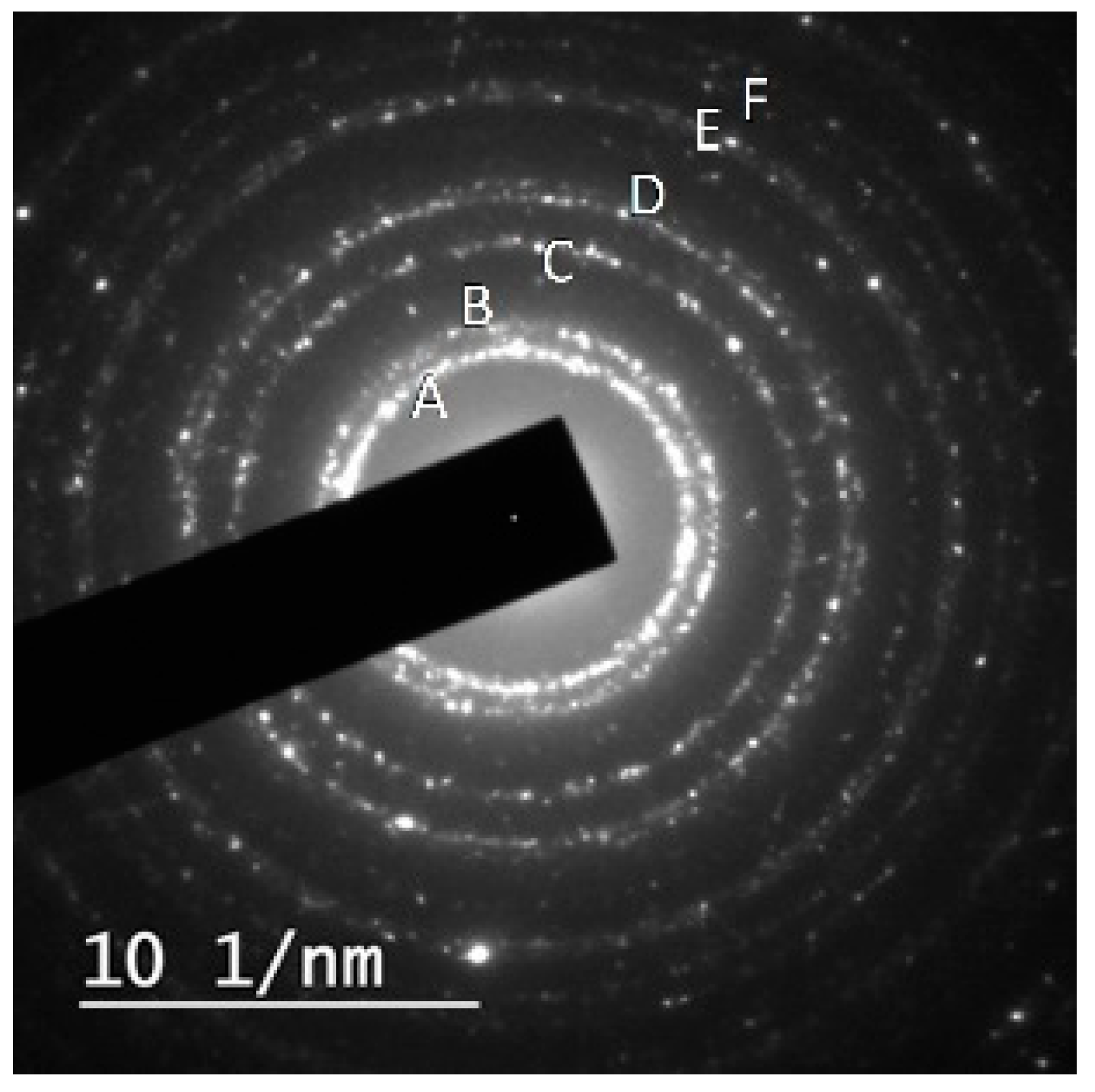 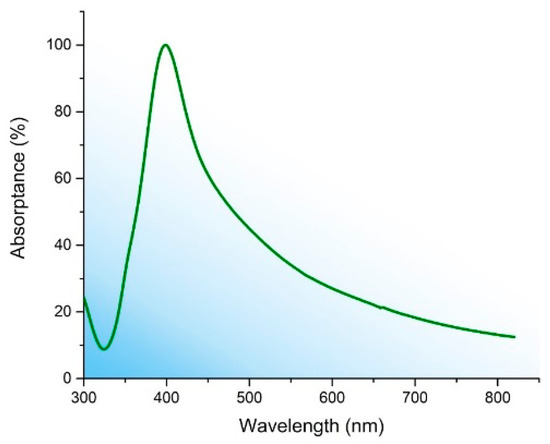 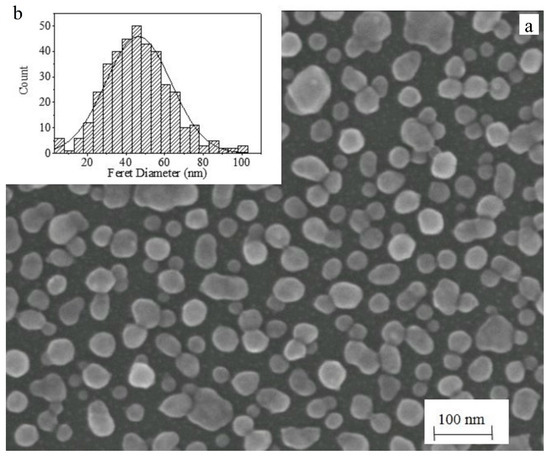 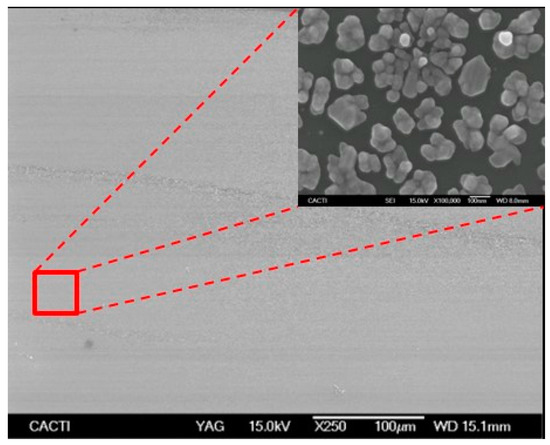