Two-dimensional (2D) materials are currently among the most appealing class of materials, with a wide range of application prospects, from aerospace components to nanotransistors and nanosensors. The remarkable success in this field is due to the outstanding and exceptional physics of graphene [1,2], which consequently motivated the design and synthesis of other types of 2D materials. The 2D materials family includes a long list of members, thanks to the outstanding experimental accomplishments during the last decade. This continuously expanding family comprises highly symmetric members, such as graphene, hexagonal boron-nitride (h-BN) [3,4] and 2H transition metal dichalcogenides [5,6]. On the other side, the 2D materials family also includes anisotropic lattices, like phosphorene [7,8,9] and antimonene [10] and few very low-symmetry anisotropic materials, like 1T’ transition metal dichalcogenides [11] and distorted-1T rhenium disulfide [12], which may show highly anisotropic properties. Although the majority of research concentrations in the field of 2D materials has been devoted to the high symmetry structures, recently the low-symmetry counterparts are also gaining considerable attention [13]. This recent trend originates from the unique optical, electrical and transport properties of low-symmetry 2D materials, which offer novel possibilities for the design of angle-dependent advanced devices, such as photodetectors, polarized lasers and sensors, digital inverters and artificial synaptic devices [13,14,15,16].
Group IV–V-type 2D materials, like silicon phosphide (SiP), silicon arsenide (SiAs) germanium phosphide (GeP) and germanium arsenide (GeAs), are among the attractive low-symmetry 2D materials. The bulk lattices of aforementioned structures are already known to show anisotropic properties. In this regard, bulk SiP and SiAs layered structures were realized experimentally by Beck and Stickler [17] in 1966. A few years after, bulk GeP and GeAs materials were experimentally fabricated by Donohue and Yang [18]. Nonetheless, these atomic lattices in the 2D form were first brought into consideration by a theoretical work in 2016 [19]. Existence of weak interlayer interactions in the bulk layered SiP, SiAs, GeP and GeAs is a key advantage to facilitate the experimental realization of their 2D counterparts, commonly achieved by exfoliation techniques. Recently, GeAs nanomaterials were fabricated by Yang et al. [13], with anisotropic planar optical responses. In a recent exciting advance, GeP in the 2D form was fabricated by Li et al. [20], which shows strong in-plane anisotropic properties. As an interesting matter of fact, according to the density functional theory (DFT) results by Cheng et al. [21], the exfoliation energy of SiP and SiAs from the bulk counterparts is lower than that of the graphite. On this basis, the prospects for the experimental realization of SiP and SiAs nanomembranes employing the exfoliation method is highly bright and thus expectable in the near future. In our recent study [22], it was concluded that GeP, GeAs, SiP and SiAs monolayers are remarkably strong and exhibit anisotropic mechanical properties. These 2D lattices were also found to show strain-tunable band gap, which is desirable for sensing applications. The optical and electronic properties of these novel 2D systems were also explored in the several recent theoretical works [23,24,25,26,27,28,29,30,31,32]. In general, theoretical studies offer unique tools to investigate the material properties of 2D based materials [33,34,35,36,37,38,39]. We would like to note that the hydrogen fuel yields one of the highest energy densities among all fuels, and therefore the production of this gas through the employment of the solar water splitting methods has gained remarkable attention to address greenhouse environmental issues. The objective of the present study is therefore to explore the prospect of SiP, SiAs, GeP and GeAs nanosheets for the water splitting application on the basis of first-principles DFT calculations.

First-principles DFT calculations in this work were conducted using the Vienna ab-initio simulation package (VASP) [40,41,42]. Generalized gradient approximation (GGA) exchange-correlation functional within the Perdew–Burke–Ernzerhof (PBE) [43] method with a plane-wave cut-off energy of 500 eV was used for the calculations. For the geometry optimizations, conjugate gradient method was employed with termination criteria of 10−5 eV and 0.01 eV/Å for the energy and forces, respectively, within the tetrahedron method proposed by Blöchl [44]. To evaluate the electronic band structure, we used 21 × 5 × 1 Monkhorst-Pack [45] k-point mesh, with a lower k-point mesh along the elongated direction. We also employed the screened hybrid functional HSE06 [46] to more accurately report the electronic band structure as well as the band-gap values using a 11 × 5 × 1 k-point grid.
The evaluation of the optical properties (absorption coefficient) was performed using the random phase approximation (RPA) method constructed over HSE06 approach as implemented in the VASP code, with a 500 eV cut-off for the plane wave basis set and a 12 × 12 × 1 k-point mesh. The absorption coefficient (α) of the materials was computed from the frequency dependent dielectric constant, using the following formula: where c is the speed of light in vacuum and kαβ is imaginary part of the complex refractive index and, known as the extinction index:
Because of the huge depolarization effect in the 2D planar geometry for the out-of-plane light polarization, we only focus on the optical absorption spectrum for the in-plane light polarizations [47].

Solar water splitting and the production of hydrogen fuel is currently considered as one of the most attractive green technologies to tackle the greenhouse environmental issues due to extensive consumption of fossil fuels. Low-symmetry 2D materials have recently garnered growing attention stemming from their unique direction-dependent transport properties. In this work we explored the application of SiP, SiAs, GeP and GeAs anisotropic nanosheets for the solar water splitting. The electronic band-gaps of stress-free and single-layer SiP, SiAs, GeP and GeAs were estimated to be 2.59, 2.34, 2.30 and 2.07 eV, respectively, which are within the desirable ranges for the water splitting. The studied nanosheets also satisfy the required band positions for the both H+/H2 and O2/H2O reactions, for a wide-range of environmental pHs. SiP, SiAs, GeP and GeAs nanomembranes were also predicted to adsorb visible range of light, with stupendously high absorption coefficients. The results provided by the first-principles density functional theory simulations highlight the outstanding prospects of SiP, SiAs, GeP and GeAs nanosheets for the design of next-generation hydrogen fuel nanogenerators. 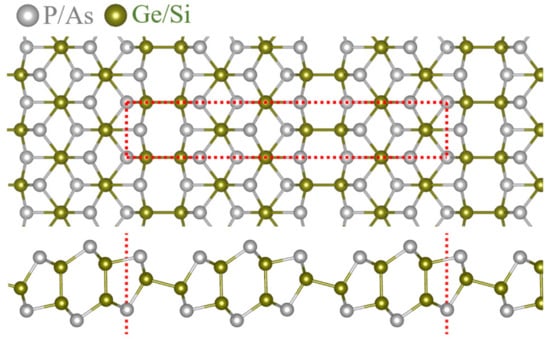 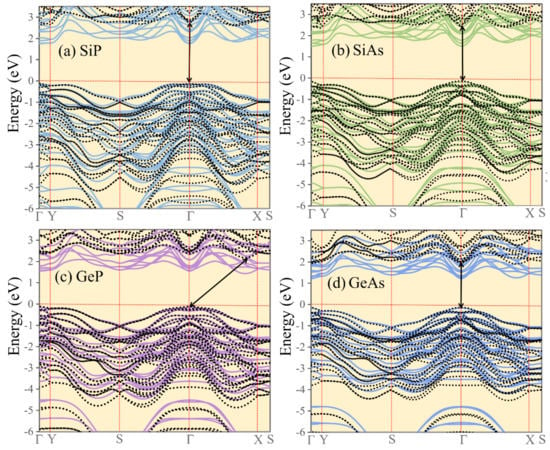 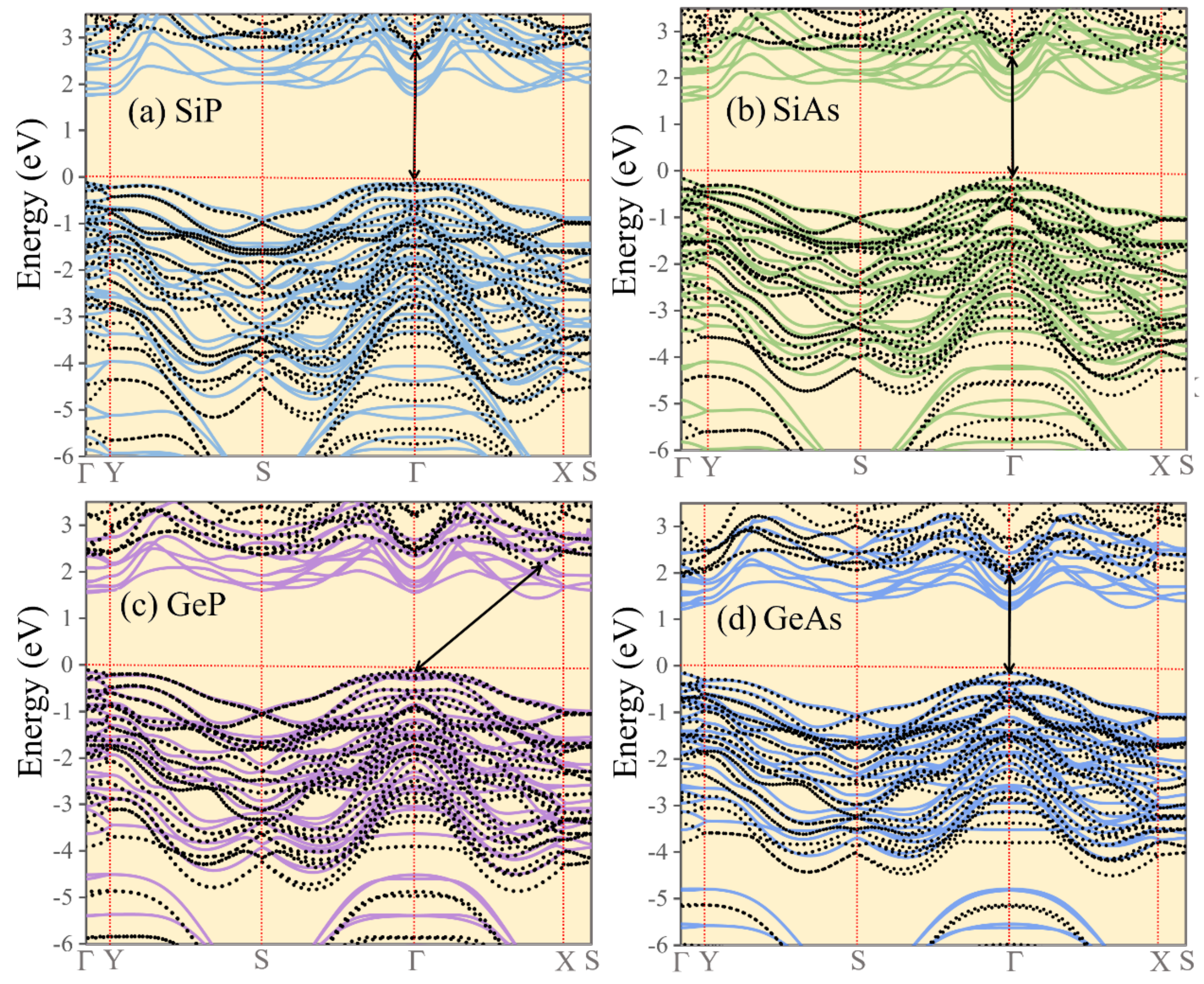 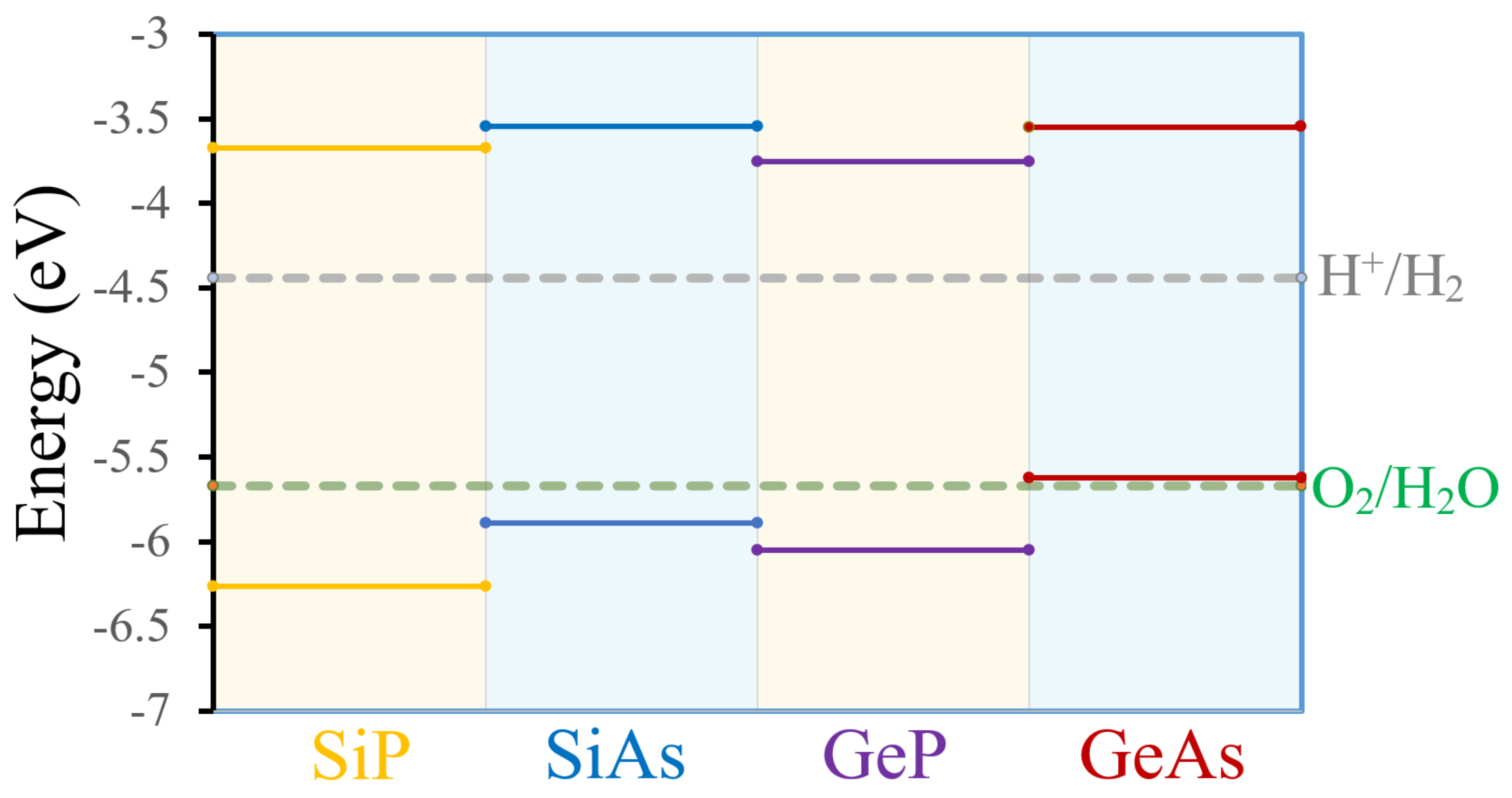 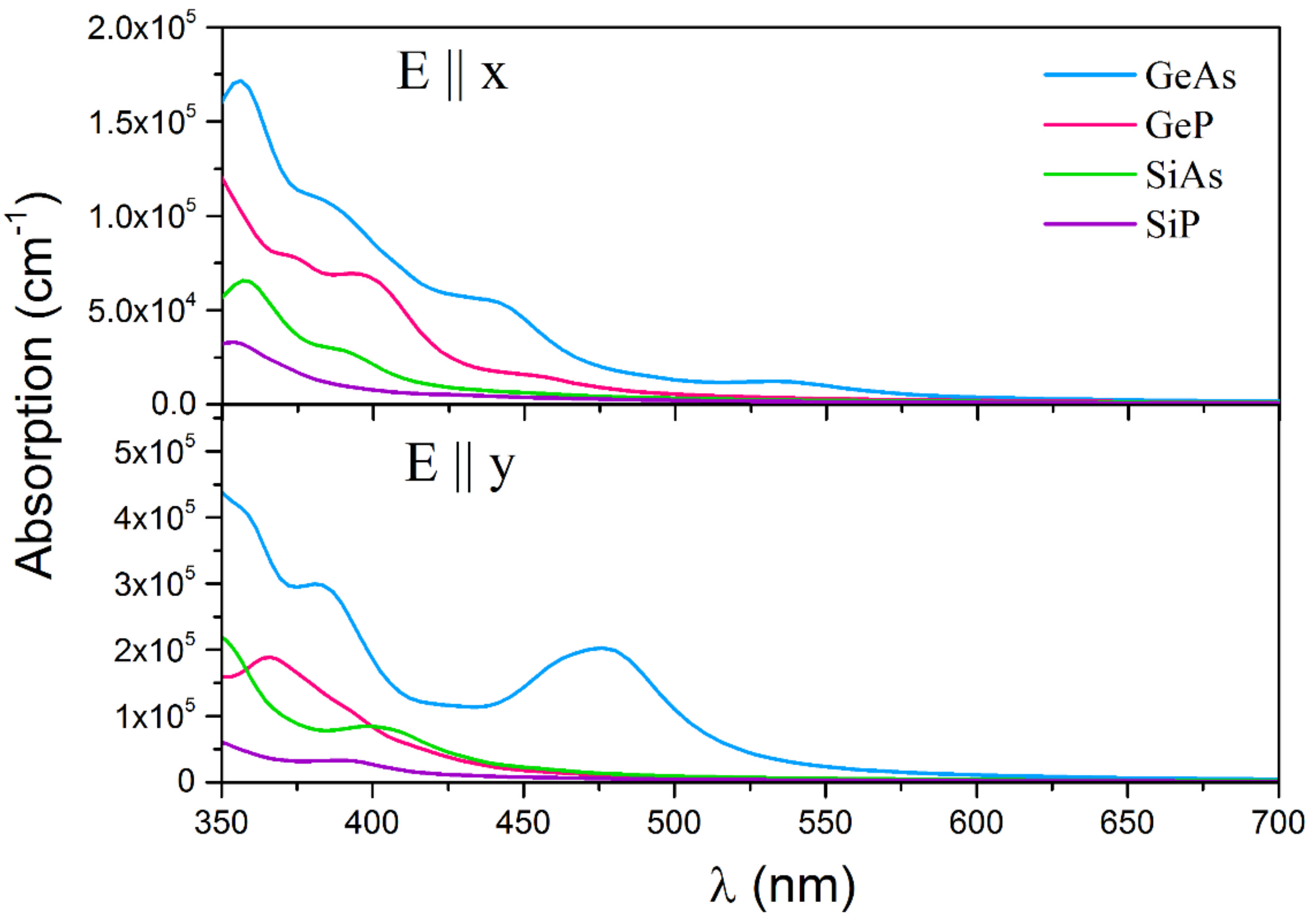