Coating technology is one of the most frequently-used surface modification technologies, and has been applied in many engineering fields, including corrosion prevention [1], thermal barrier [2,3], anti-friction [4,5], stealth materials [6], etc. Other functions such as photocatalytic activity have also been found in metal/alloy coatings after certain treatments including thermal oxidation [7,8], chemical oxidation [9,10], plasma electrolytic oxidation [11,12], anodic oxidation [13,14], among others. In our published work, we prepared TiO2/Ti composite photocatalyst coatings on the substrate of Al2O3 balls using mechanical coating followed by thermal oxidation [15]. With further study, we developed oxygen-deficient visible-light-responsive TiO2 coatings [16]. Therefore, the preparation of metal/alloy coatings is of paramount practical importance. Researchers have prepared several kinds of metal/alloy coatings on ceramic or metal substrates using mechanical coating technique [17]. Early in 1995, Kobayashi developed Al and Ti-Al coatings on the substrates of stainless steel balls and ZrO2 balls [18]. Romankov et al. [19] also prepared Al and Ti-Al coatings on a Ti alloy substrate. Gupta et al. [20] prepared nanocrystalline Fe-Si alloy coatings on a mild steel substrate. Farahbakhsh et al. [21] deposited Cu and Ni-Cu solid solution coatings on ceramic and metal substrates. We have fabricated Fe and Zn coatings on Al2O3 ball substrates [22,23]. Furthermore, we have also revealed that the properties of the metal powder played an important role in the formation of metal coatings [24]. Besides the influence of some processing parameters including milling speed and time, a possible mechanism of coatings’ formation was further studied in [20,21,23].
However, the influence of substrates including material properties and surface roughness on the formation of metal coatings has not been revealed so far. In this work, we would verify the formation possibility of metallic coatings on metallic substrates and attempted to prepare Ti coatings on different steel substrates utilizing mechanical coating technique. The formation process of Ti coatings and the influence of substrates’ properties on their formation were also involved.

Ti coatings were prepared using a mechanical coating technique with a planetary ball mill (Pulverisette 6, Fritsch). The transmission ratio of the mill was 1:−1.82. Ti powder (Osaka Titanium Technologies Co. Ltd., Osaka, Japan) and steel balls as the substrates were charged into a bowl made of alumina (volume: 250 mL). The bowl was fixed in the planetary ball mill, and then the mechanical coating process was carried out at different rotational speeds for different durations. Two kinds of substrates were used separately to clarify the influence of steel ball substrates on the formation of metal coatings, including steel balls (SUJ-2, density of 7.85 g·cm−3) and stainless steel balls (SUS-304, density of 7.93 g·cm−3). The composition of steel (SUJ-2) and stainless steel balls (SUS-304) is listed in Table 1. To study the influence of substrates’ surface roughness, steel balls were polished to make their surface smoother before the mechanical coating process. The polishing process is as follows. Firstly, abrasive paper with mesh number of 80 was put into the bowl along the wall of the bowl. Secondly, the balls were charged into the bowl and ball milling was carried out. In the ball milling, the balls were polished by the abrasive paper throughout their repeated collision and friction with the ball of the bowl. The surface roughness of the balls was not measured. Meanwhile, steel balls were annealed in vacuum at 1073 K holding for 1.5 h to change their hardness before mechanical coating process to study the influence of the substrate hardness on the coatings’ formation. Table 2 and Table 3 give the relevant processing parameters and the sample symbols. The average particle size distribution of titanium powder is about 30 μm, ranging from 5–100 μm. Most of them (up to 70%) are located in the range of 20–50 μm. The parameters x and y correspond to the rotational speed of the mill and milling time, respectively. The volume ratio of metallic powder to the balls and the filling degree are 1:1.7 and 5%, respectively.
All samples were characterized by X-ray diffractometer (XRD) (JDX-3530, JEOL, Tokyo, Japan) with Cu Kα radiation at 30 kV and 20 mA to determine the phases present. A scanning electron microscope (SEM) (JSM-6510A, JEOL, Tokyo, Japan) was used to observe the surface morphologies and the microstructure of the cross-sections of the Ti-coated steel balls. The average thickness of Ti coatings was estimated from 40 different locations of five Ti-coated steel balls in their SEM images of the cross sections. The average weight increase of 50 steel balls during mechanical coating process was also calculated by weighing 50 randomly-selected Ti-coated steel balls three times.

3.3. Influence of Surface Roughness and Hardness 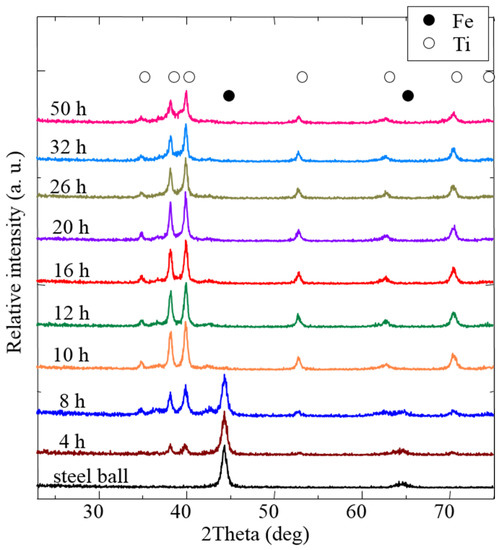 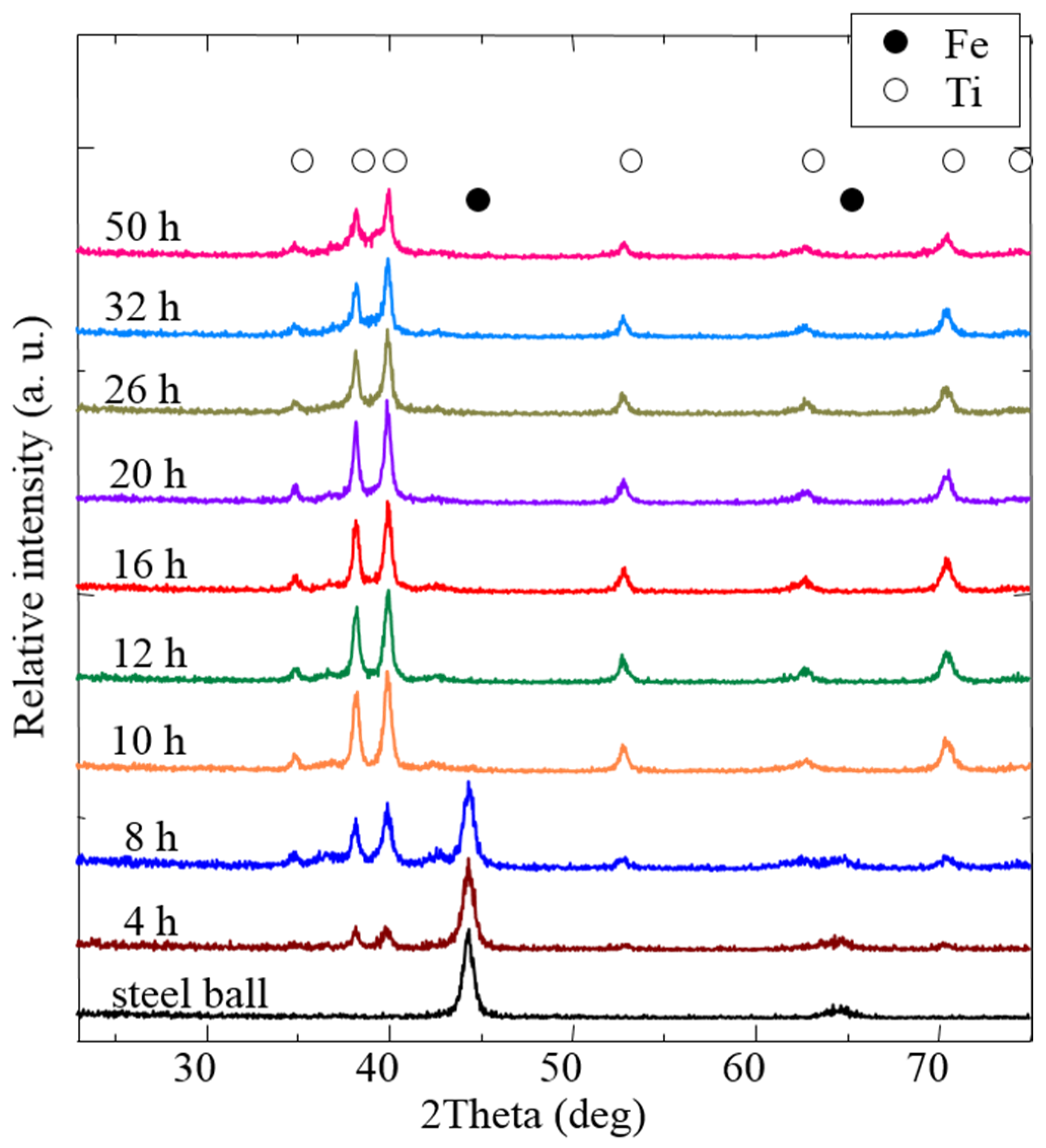 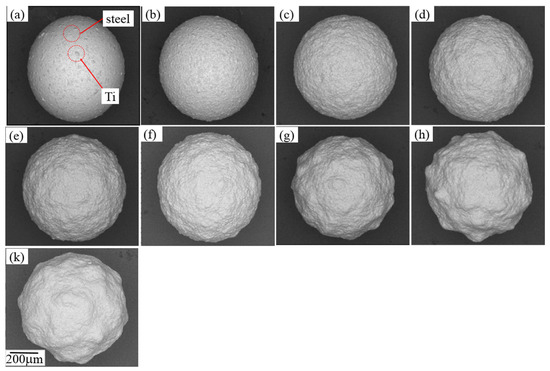 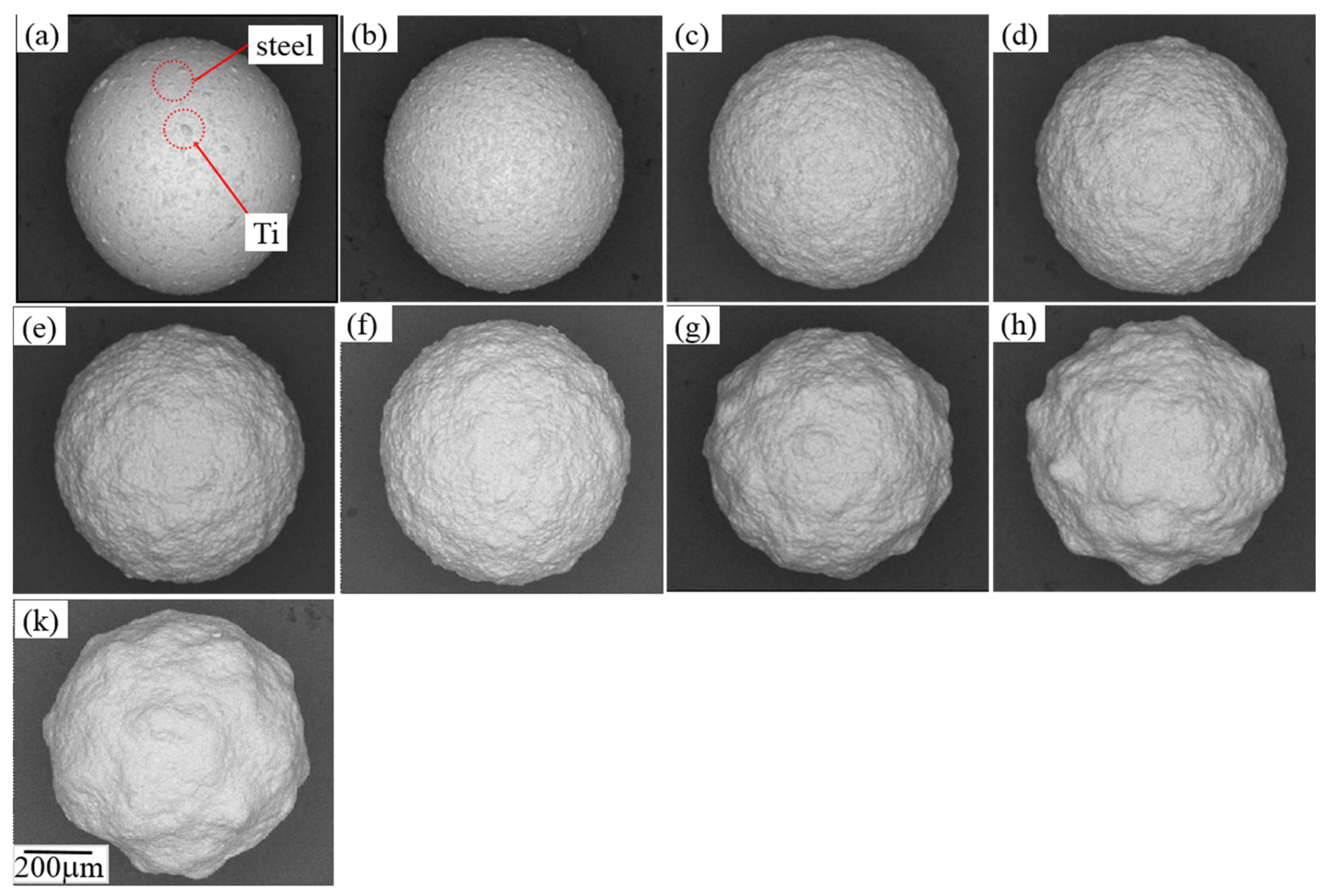 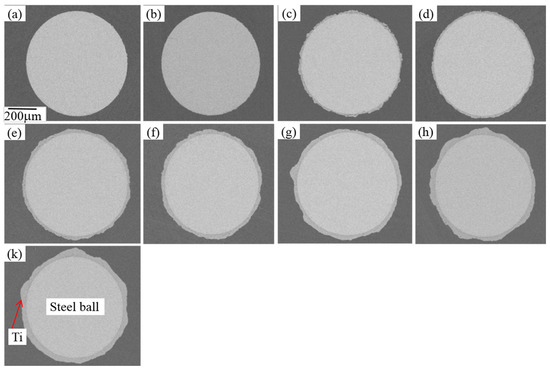 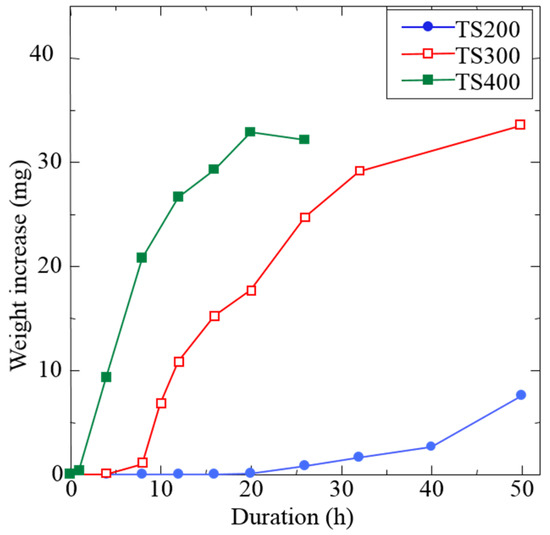 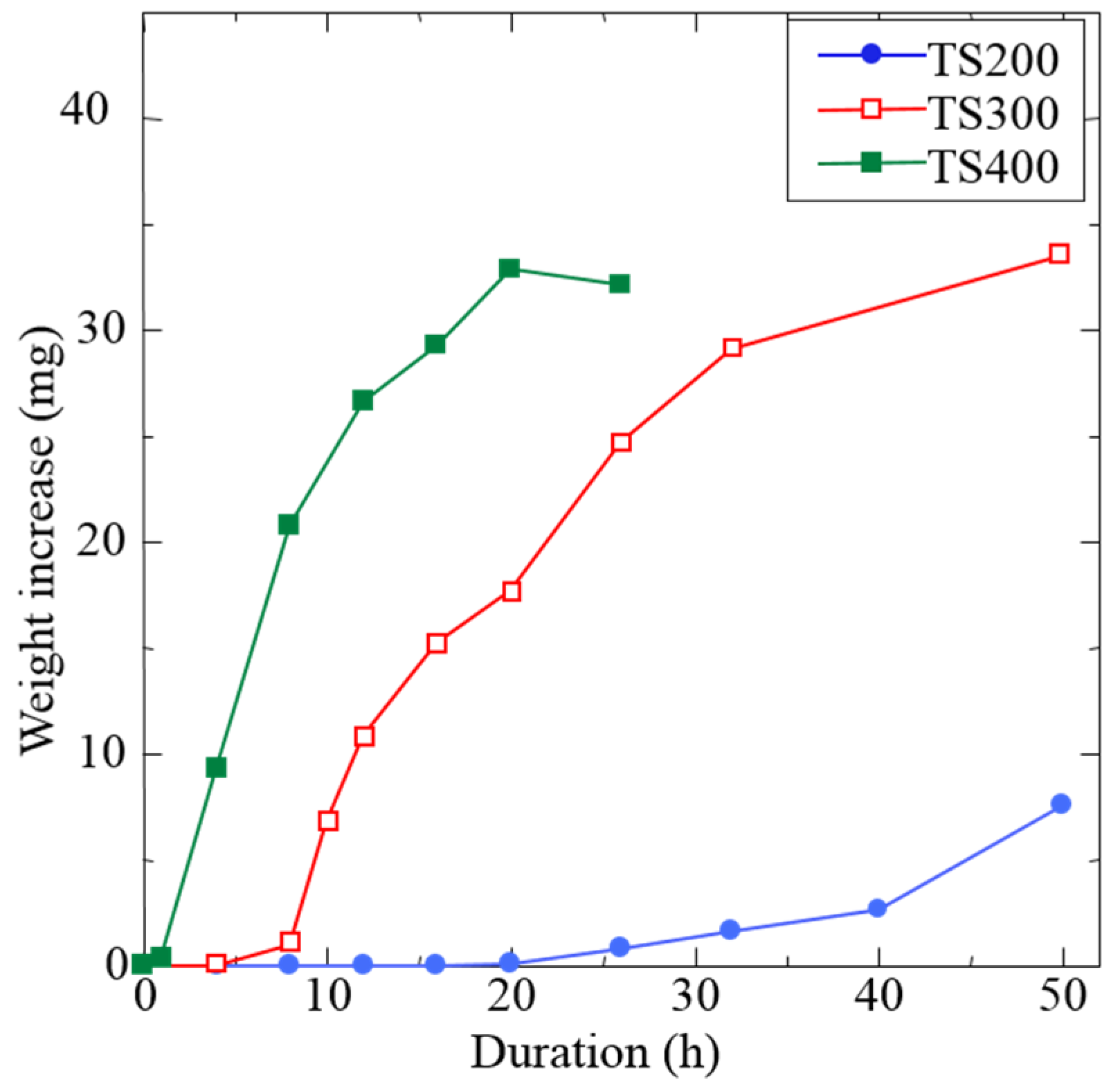 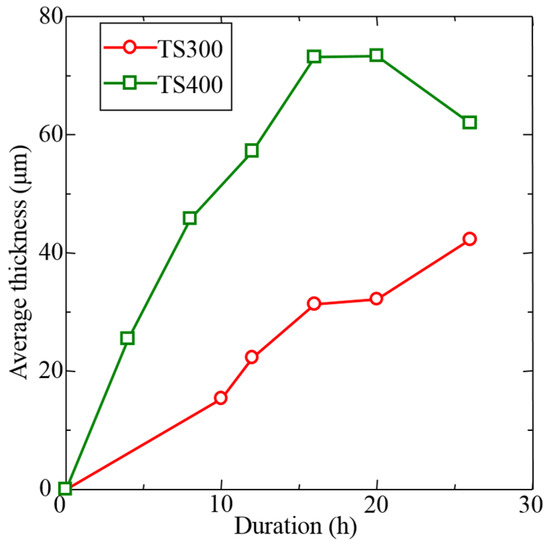 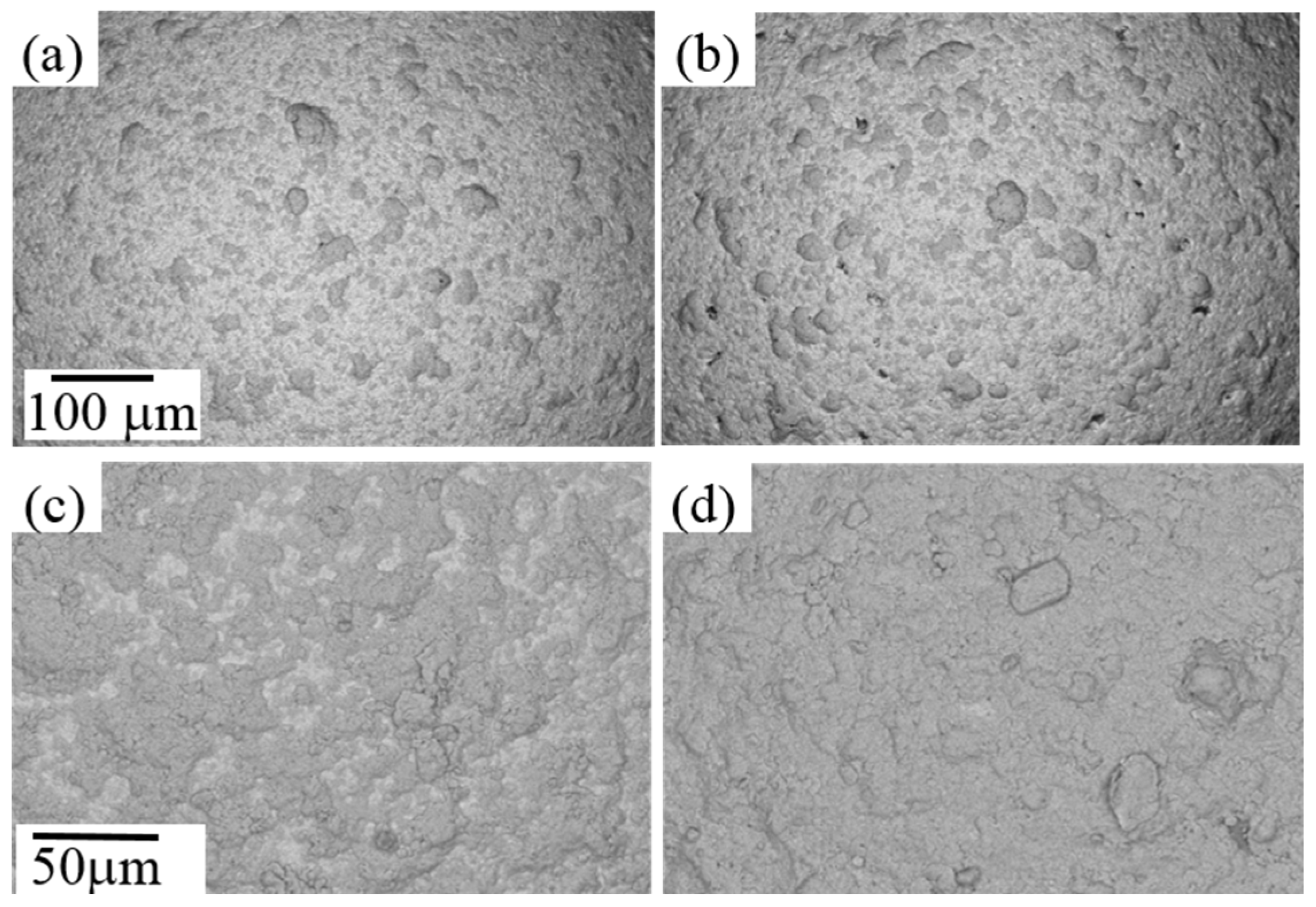 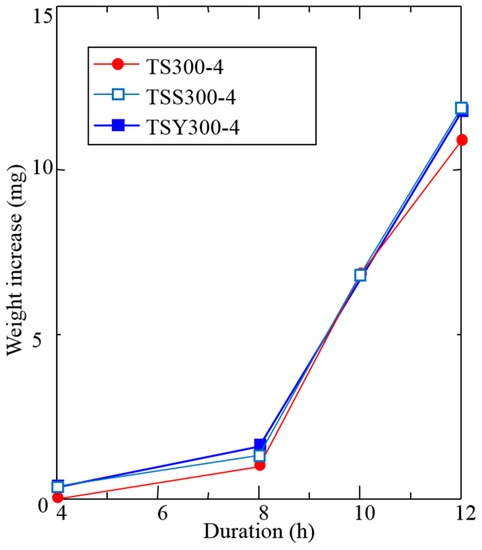 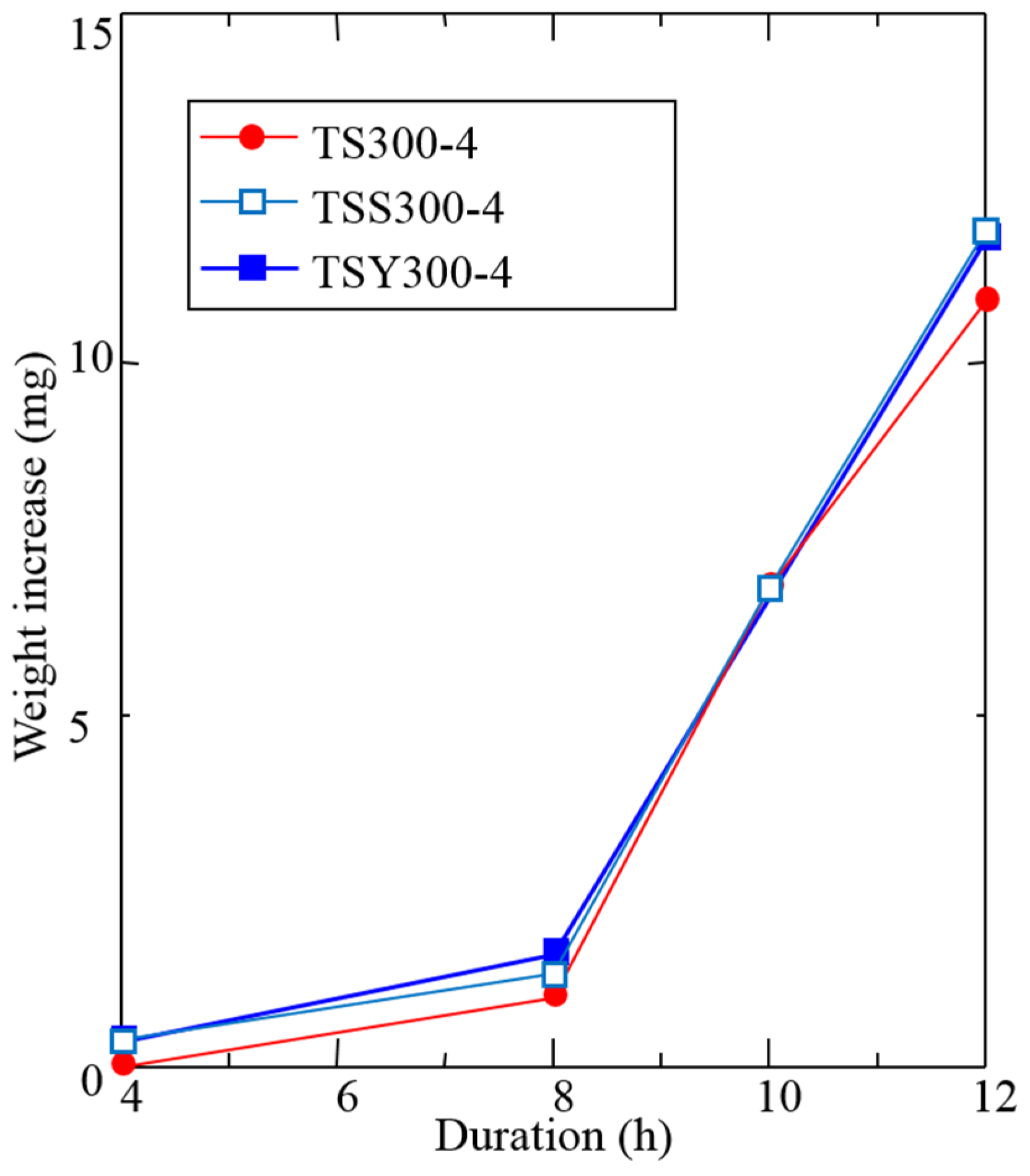