Non-steroidal anti-inflammatory drugs (NSAIDs) are among the most common pharmaceuticals used worldwide. They are widely detected in natural waters due to their persistence in wastewater treatment, and their removal is desirable in wastewater management. As a contribution to tackle this challenge, this study explores magnetic quaternary chitosan-based nanosorbents for the effective magnetically assisted removal of three NSAIDs (diclofenac, naproxen, and ketoprofen) from water. Toward this goal, silane groups were grafted onto the backbone of trimethyl chitosan through the reaction with an epoxide functionalized silane. Once silanized, the modified chitosan was employed to coat Fe3O4 nanoparticles. The prepared materials were characterized using FTIR spectroscopy and solid-state 29Si and 13C NMR spectroscopy, which confirmed the encapsulation of Fe3O4 nanoparticles with a hybrid siliceous material enriched in trimethyl chitosan. The effect of the initial NSAIDs concentration, pH, and contact time in the adsorption behavior was investigated. The kinetic data were well described by the pseudo-second-order kinetic model, indicating a chemisorption mechanism. The maximum adsorption capacities estimated from the Langmuir model were 188.5 mg/g (0.5925 mmol/g), 438.1 mg/g (1.7371 mmol/g), and 221.5 mg/g (0.8710 mmol/g) for diclofenac, naproxen, and ketoprofen, respectively. These adsorption capacities are higher than those of most reported sorbents, indicating the potential of these biosorbents to remove the selected NSAIDs using low-energy magnetically assisted separation. View Full-Text
Keywords: non-steroidal anti-inflammatory drugs; trimethyl chitosan; magnetic particles; adsorption non-steroidal anti-inflammatory drugs; trimethyl chitosan; magnetic particles; adsorption
►▼ Show Figures 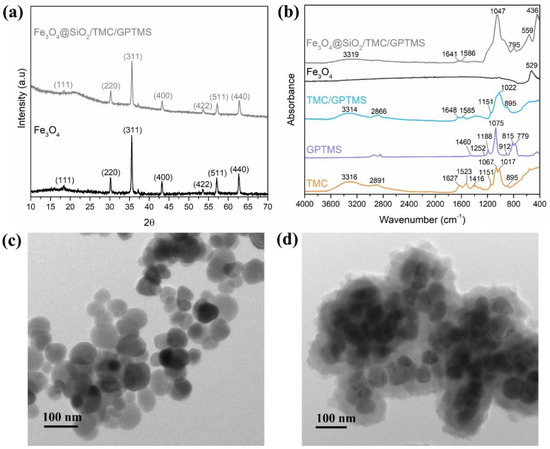