With the rapid exhaustion of fossil resources, and environmental pollution relative to the use of fossil-based products, developing eco-friendly products using biomass and/or biodegradable resources is becoming increasingly conspicuous. In this study, ecofriendly and biodegradable composite membranes containing varying MC/PLA (methylcellulose/polylactic acid) mass ratios were prepared. The properties and structures of the MC/PLA membranes were studied by mechanical testing, 13C NMR techniques, X-ray diffraction (XRD), thermogravimetric analysis (TGA), and hot compression. The MC/PLA membranes displayed markedly improved tensile strength and elongation at the MC/PLA mass ratio range of 99:1 to 9:1. The tensile strength and elongation of the MC/PLA (97:3) membrane was found to be the optimum, at 30% and 35% higher than the neat MC, respectively. It was also found that hot compression could improve the tensile strength and elongation of the membranes. At the same time, the membranes showed enough good thermal stability. In addition, the effect of MC/PLA mass ratio on morphologies of the membranes were studied by microscopy technique.
Keywords: methylcellulose; polylactic acid; composite membrane; recyclability; improved properties methylcellulose; polylactic acid; composite membrane; recyclability; improved properties

The rapid exhaustion of fossil resources, and environmental pollution caused by the usage of fossil-based products, urgently demand new alternatives to satisfy sustainable development and improve the ecological environment. To this end, researchers have made great efforts to develop eco-friendly products using biomass and/or biodegradable resources [1,2,3,4,5]. Among them, polylactic acid (PLA) has drawn the interest of researchers because of its renewability, biocompatibility, and biodegradability (Figure 1) [6,7,8,9]. PLA is a semi crystalline polyester synthesized through condensation polymerization of lactic acid [10,11,12,13]. Some of its properties (e.g., strength, stiffness, and gas permeability) are comparable to synthetic plastics [14,15,16]. Hence, it is regarded as a potential environmentally friendly alternative material to traditional synthetic plastics. However, its further applications are hindered by slow biodegradation, intrinsic brittle behavior, and low toughness, among others [17,18,19,20]. To overcome these drawbacks, the development of PLA blends/composites is one of the feasible approaches to achieve enhanced properties [21,22,23,24,25,26]. Moreover, our previous studies also revealed that the composite prepared from microcrystalline cellulose and PLA displayed superior biocompatibility, biodegradability, and mechanical properties to each neat component [27].
Methylcellulose (MC) is a derivative from the replacement of the hydrogen atoms of the hydroxyl groups in the cellulose skeleton by methyl groups (Figure 1) [28,29]. It has many attractive properties, such as excellent film-forming capability, good biodegradability, nontoxicity, and strong mechanical property [30,31]. Hence, methylcellulose is a cellulose derivative and widely applied in food, pharmaceutical, cosmetic, gel, paint, detergent, construction, and ceramics industries [32,33,34,35,36,37,38]. At the same time, methylcellulose has also been reported to fabricate composite membranes by blending renewable resources, such as wheat whey protein [39,40], gluten [41], sodium alginate [42], chitosan [43,44], and nanocellulose [29]. Considering the impressive characteristics, easy availability, and low cost of methylcellulose, in this work, it was used for the preparation of methylcellulose/PLA composite membranes. Systematic investigations were conducted to reveal the effect of MC/PLA mass ratio on morphological structure, thermal stability, crystal structure, and mechanical properties of the methylcellulose/PLA membrane materials. Moreover, the effect of hot compression on the mechanical properties along with the recyclability of the membrane materials were also examined.

Fabrication of MC/PLA (x:y) membrane was described below. The MC/PLA/HFIP solution was gained by stirring MC, PLA, and HFIP mixture in a flask. The total solubility of MC and PLA in HFIP was about 1.5 g/100 g. The flask was then placed in an ultrasonic apparatus for 20 min to remove air bubbles. Then, the MC/PLA/HFIP solution was transferred to a glass mold (9 cm × 9 cm). A MC/PLA (x:y) membrane was gained after HFIP underwent volatilization, and x:y was the MC/PLA mass ratio. The obtained MC/PLA (x:y) membrane was further dried in a vacuum oven at 50 °C for the complete evaporation of HFIP residual. A process flow chart of the sample preparation is shown in Figure 2.

Scanning electron micrographs (SEM) were taken with a JEOL JSM-6390LV scanning electron microscope (Japanese Electronics Co., Ltd., Tokyo, Japan) MC/PLA membrane samples were frozen in liquid nitrogen, and then immediately snapped. The fracture surfaces of the samples were sputtered with gold, and then photographed. Solid-state 13C NMR measurement was performed with a 400 MHz NMR spectrometer (Bruker Advance III, Bruker Corp., Karlsruhe, Germany), and the size of the cellulose/PLA sample was ground into powder (less than 1 mm) prior to solid-state 13C NMR measurement. XRD analysis was measured with a Bruker D8 Advance diffraction spectrometer (Bruker Corp., Karlsruhe, Germany) with Cu-Ka radiation (40 kV, λ = 0.154 nm) over the range 3°–60° at a scan speed of 2° min−1. A TQ50 thermal gravimetric analyzer (TA Instruments, New Castle, DE, USA) was used for thermogravimetric analysis at 25 °C to 600 °C, with a heating rate of 10 °C min−1 in a N2 atmosphere.

2.4. Determination of Tensile Strength and Elongation at Break

Tensile strength and elongation at break of the cellulose/PLA membranes were determined on a WDW-10 microcomputer control electronic universal tensile tester, based on ISO 527-3, 1995 (E). The extension rate and gauge length were 2 mm min−1 and 20 mm, respectively. Before determination, the cellulose/PLA membrane was cut into dumbbell-shaped specimens of 75 mm length and then were moistened for 24 h in a dryer saturated with NaCl solution (RH = 75%). Tensile strength and elongation at break values were averages of five measurements.

A 63T electrothermal semi-automatic plate vulcanizing machine (Chengdu Lishi Hydraulic Manufacturing Co. Ltd., Chengdu, China) was employed to complete hot compression tests. The MC/PLA membrane was pressed under 10 MPa for 10 min at a known temperature, followed by cooling to ambient temperature under 10 MPa. The tensile strength and elongation at break of the thermal-pressed membrane were measured, as mentioned before.

To successfully prepare a MC/PLA membrane, several solvents, including dimethyl sulfoxide, 1-methylpyrrolidine, 1,4-dioxane, tetrahydrofuran, dimethylacetamide, dimethylformamide, and HFIP, were tested so as to screen out a solvent which can simultaneously dissolve MC and PLA. Fortunately, it was found that HFIP could simultaneously dissolve MC and PLA, but not the other solvents. Therefore, HFIP was selected as a solvent for MC and PLA dissolution. The well-blended homogeneous MC/PLA/HFIP solutions with arbitrary mass ratio of MC to PLA were gained by dissolving MC and PLA in HFIP. Subsequently, the MC/PLA membrane was successfully obtained by pouring a MC/PLA/HFIP solution into a mold, followed by evaporating HFIP. Moreover, low boiling point (59 °C) of HFIP makes it easy to recycle and reuse. At the same time, MC and PLA can feasibly be dissolved in HFIP at ambient temperatures, which is obviously energy-saving as extra heating or cooling is not required. Therefore, this indicates a scale-up manufacturing possibility of MC/PLA membranes.

SEM was used to investigate the morphology of the MC/PLA and MC membranes, and the SEM homographs of the cryo-fractured surfaces of these membrane are shown in Figure 3. As observed from Figure 3, the morphological structures are strongly affected by MC/PLA mass ratio. Neat MC is conglomerated into a homogeneous and dense membrane. MC/PLA (99:1) and MC/PLA (97:3) membranes show a similar morphology to MC membranes. MC/PLA (95:5), MC/PLA (9:1), and MC/PLA (7:3) membranes display a significant phase separation morphological structure, in which PLA beads are distributed in a continuous MC matrix phase. MC/PLA (1:1), MC/PLA (3:7), and MC/PLA (1:9) membranes show porous morphological characteristics. This can be ascribed to the fact that when the content of PLA is less than or equal to 3 wt.%, PLA is homogenously hybridized with MC, thus exhibiting a homogeneous and dense morphology like MC/PLA (99:1) and MC/PLA (97:3) membranes. With increasing PLA (e.g., MC/PLA (95:5), MC/PLA (9:1), and MC/PLA (7:3) membranes), PLA is conglomerated into PLA beads due to the poor compatibility of MC and PLA. The further increase in PLA content can lead to a severe phase separation and generate porous morphological characteristics like MC/PLA (3:7) and MC/PLA (1:9) membranes. In addition, it was found that, at the same MC/PLA mass ratios (1:1, 3:7, and 1:9), the morphological structures of the MC/PLA composites in this study were different from those of the MC/PLA composites reported by Guan in which thin strips formed by MC were observed [45]. In the studies from Guan, MC and PLA were blended in chloroform. This suggests that the solvent dissolving MC and PLA affects the morphological structures of the MC/PLA composites.
Figure 4 represents the solid-state 13C NMR spectra of PLA, MC/PLA (1:1) membrane, and MC. Successful hybridization of MC with PLA was confirmed by the solid-state 13C NMR spectra, as shown in Figure 4. The MC/PLA (1:1) membrane only exhibited the 13C NMR spectra of PLA and MC. Moreover, no new peaks appeared in the 13C NMR spectra of the MC/PLA (1:1) membrane, suggesting that the hybridization of MC with PLA was a physical process.
The X-ray diffraction patterns were evaluated to define the crystal structures of original MC, MC/PLA membranes, and RPLA (regenerated PLA from 8 wt.% PLA solution in HFIP), which are given in Figure 5. Three typical X-ray diffraction peaks situated at 14.7°, 16.7°, and 19.1° were assigned to the (010), (200/110), and (203) crystal planes, respectively [27,46]. MC shows a semi-crystalline structure, confirmed by the two X-ray diffraction peaks situated at 8.9° and 19° [45,47,48,49]. In all MC/PLA membranes, the X-ray diffraction peak at 8.9° attributed to MC cannot be observed, and meanwhile the diffraction peak intensity at 19.7° becomes weak as the content of MC increases. At the same time, the diffraction peak intensities at 14.7°, 16.7°, and 19.1°, attributed to PLA, noticeably become weak as well. The results suggest that the crystallinity of MC and PLA in the MC/PLA membranes are reduced because of the hybrid of MC with PLA. It was also observed that, in spite of being reduced for the diffraction peak intensity of MC and PLA in the membranes, the diffraction peaks were still observable. This suggests that MC heterogeneously hybridizes with PLA, and the MC/PLA membranes show agglomeration and phase separation. This is in agreement with the SEM result discussed above. The observable diffraction peaks of MC and PLA in the membranes suggest weak or almost no interaction between MC and PLA.
Thermogravimetric analysis was used to estimate the thermostability of the MC/PLA membranes (Figure 6). As a comparison, the thermogravimetric curves of the original MC and PLA are also included in Figure 4. The thermal decomposition temperature of MC is 343 °C, and slightly higher than that of PLA (332 °C). The thermal decomposition temperatures of the MC/PLA (9:1), MC/PLA (7:3), MC/PLA (1:1), MC/PLA (3:7), and MC/PLA (1:9) membranes are 301, 308, 335, 338, and 341 °C, respectively. The decrease in the thermal decomposition temperature is mainly due to the decreased crystallinity of MC and PLA in the MC/PLA membranes, which is similar to results reported by Spiridon et al. [13]. Although the thermal decomposition temperatures of these MC/PLA membranes are less than those of MC and PLA, they still possess good thermostability and can be used at temperatures less than 300 °C.

MC/PLA composites with different mass ratios of MC to PLA were readily prepared in the present work. The tensile strength and elongation at break notably increased with increased PLA content. The MC/PLA composite with 3% PLA showed significant increases in mechanical properties. Hot compression treatment can also increase the mechanical properties. XRD results indicated that the crystallinity of MC and PLA in the MC/PLA membranes were reduced because of the hybrid of MC with PLA. SEM results indicated that the composites with 1%–10% PLA showed dense morphological structures. Interestingly, the membranes could be reused after recovery and still possessed good mechanical properties like the original composites.

This research was funded by the Changsha Science and Technology Plan (kq1902045) and SRTP Program, Henan University of Science Technology (2019159). 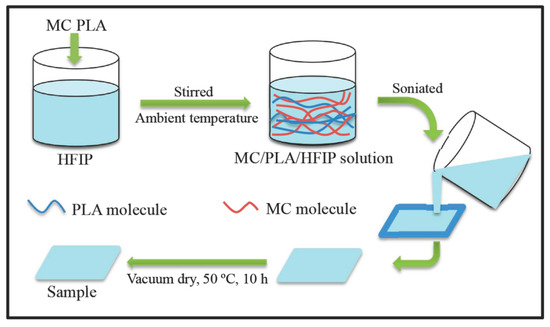 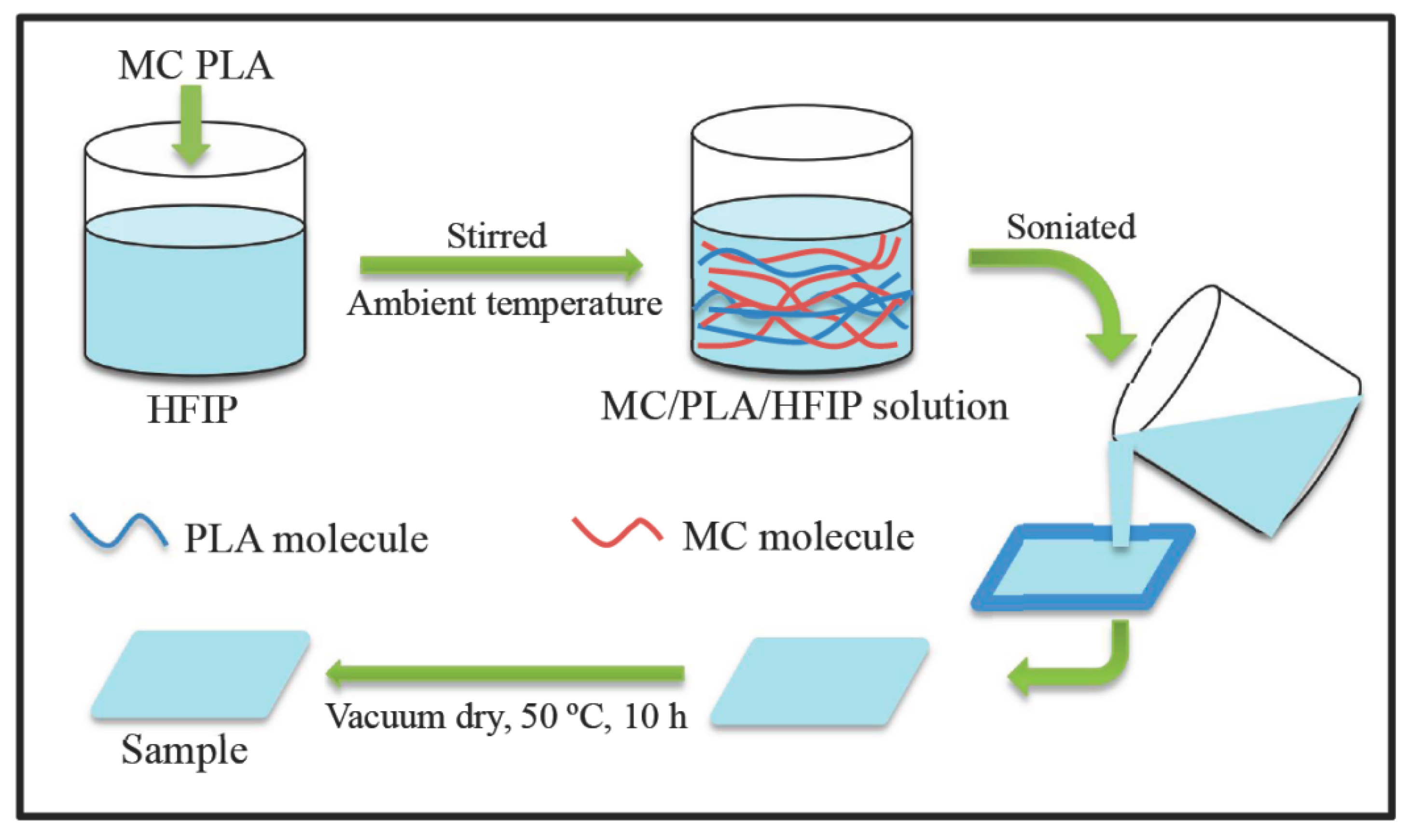 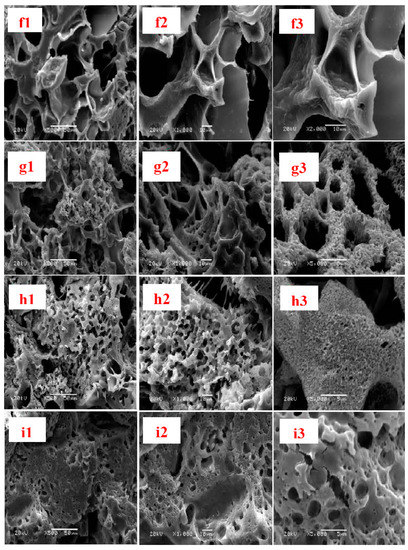 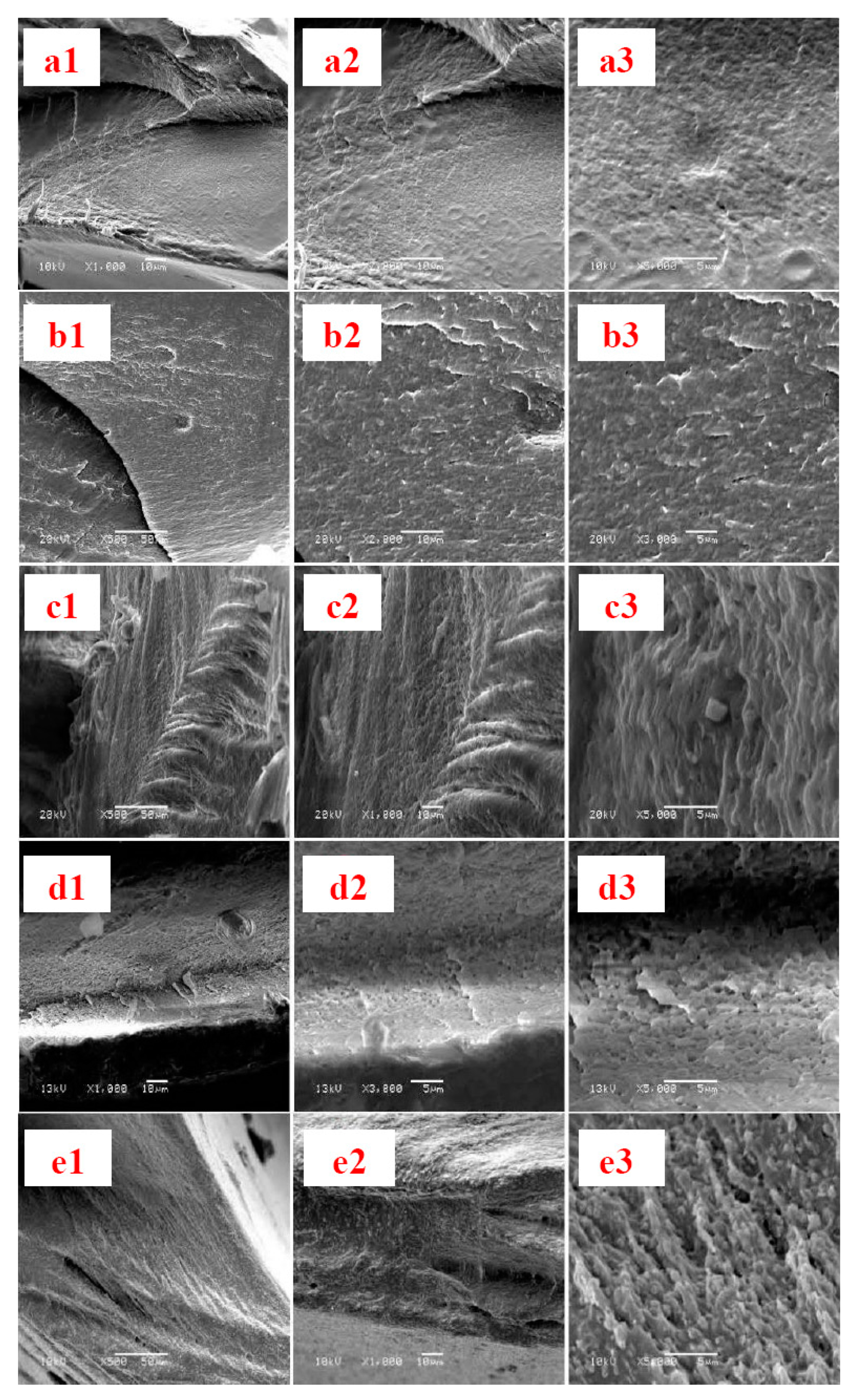 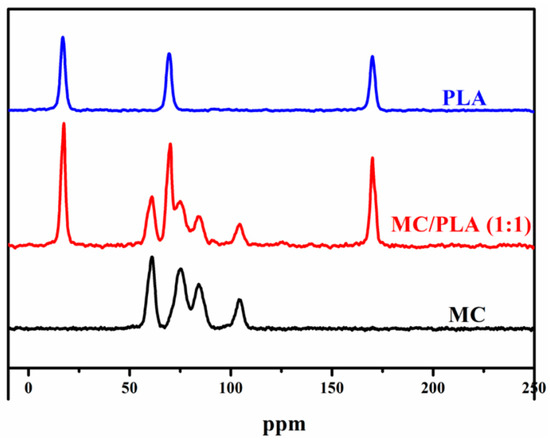 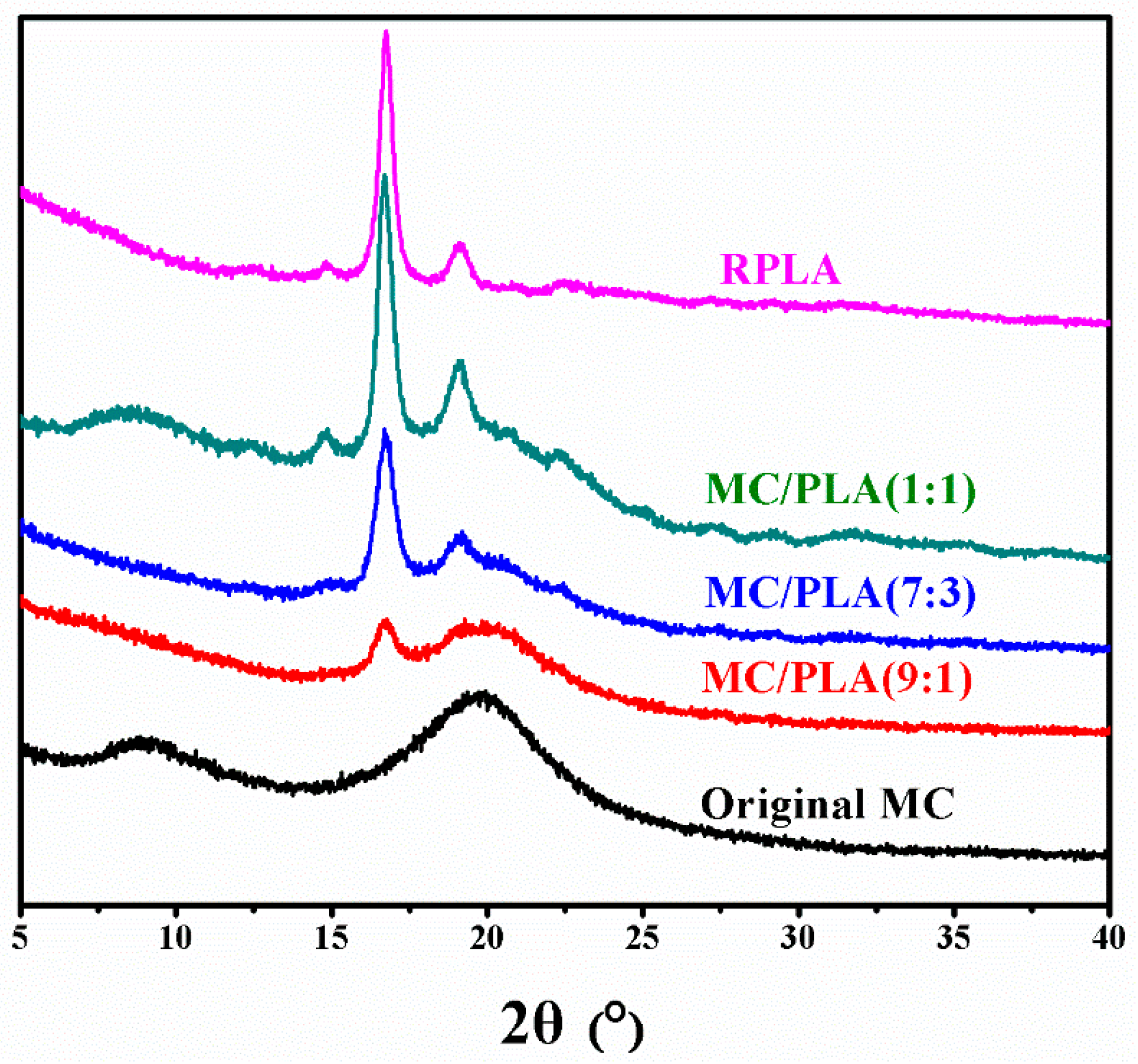 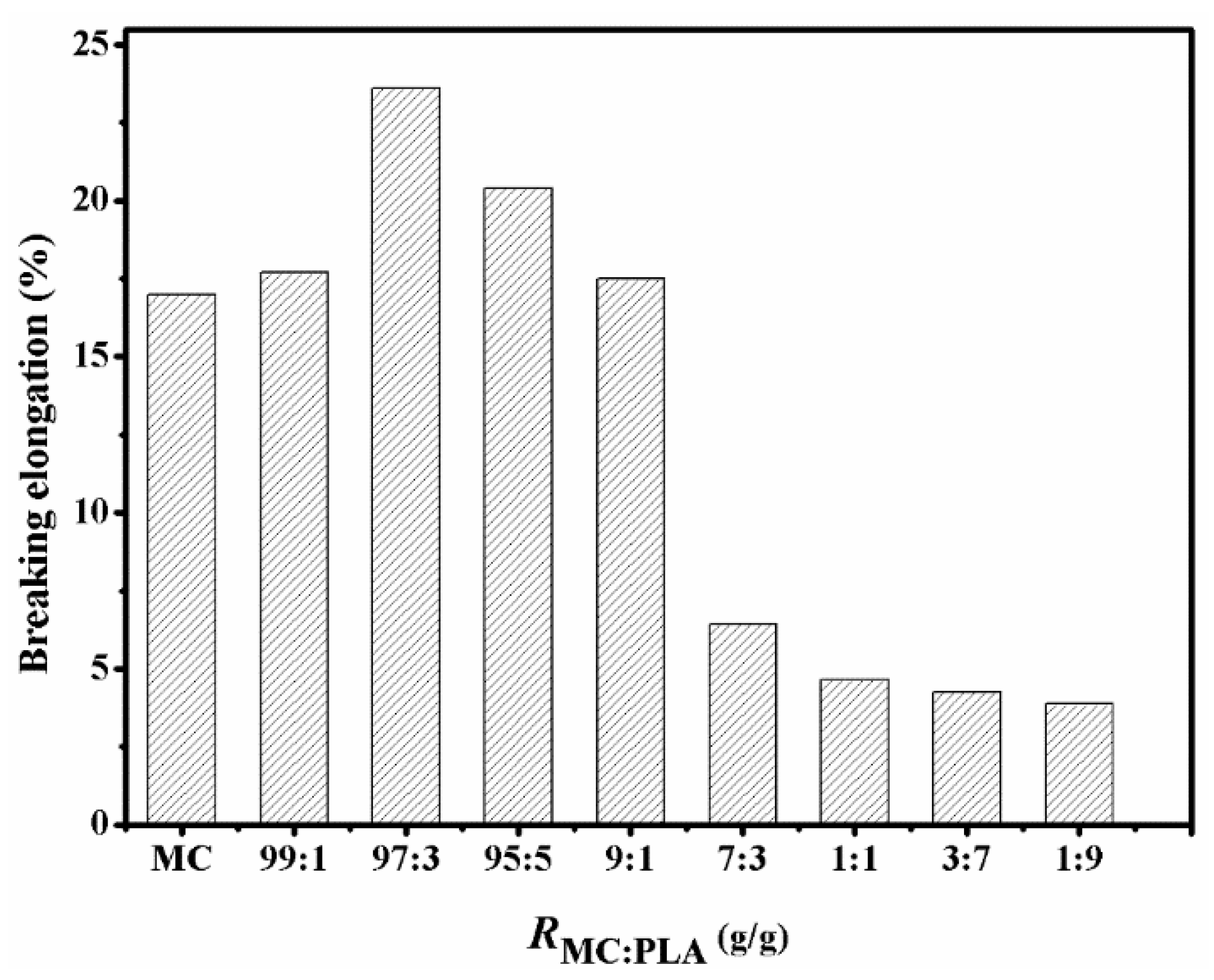 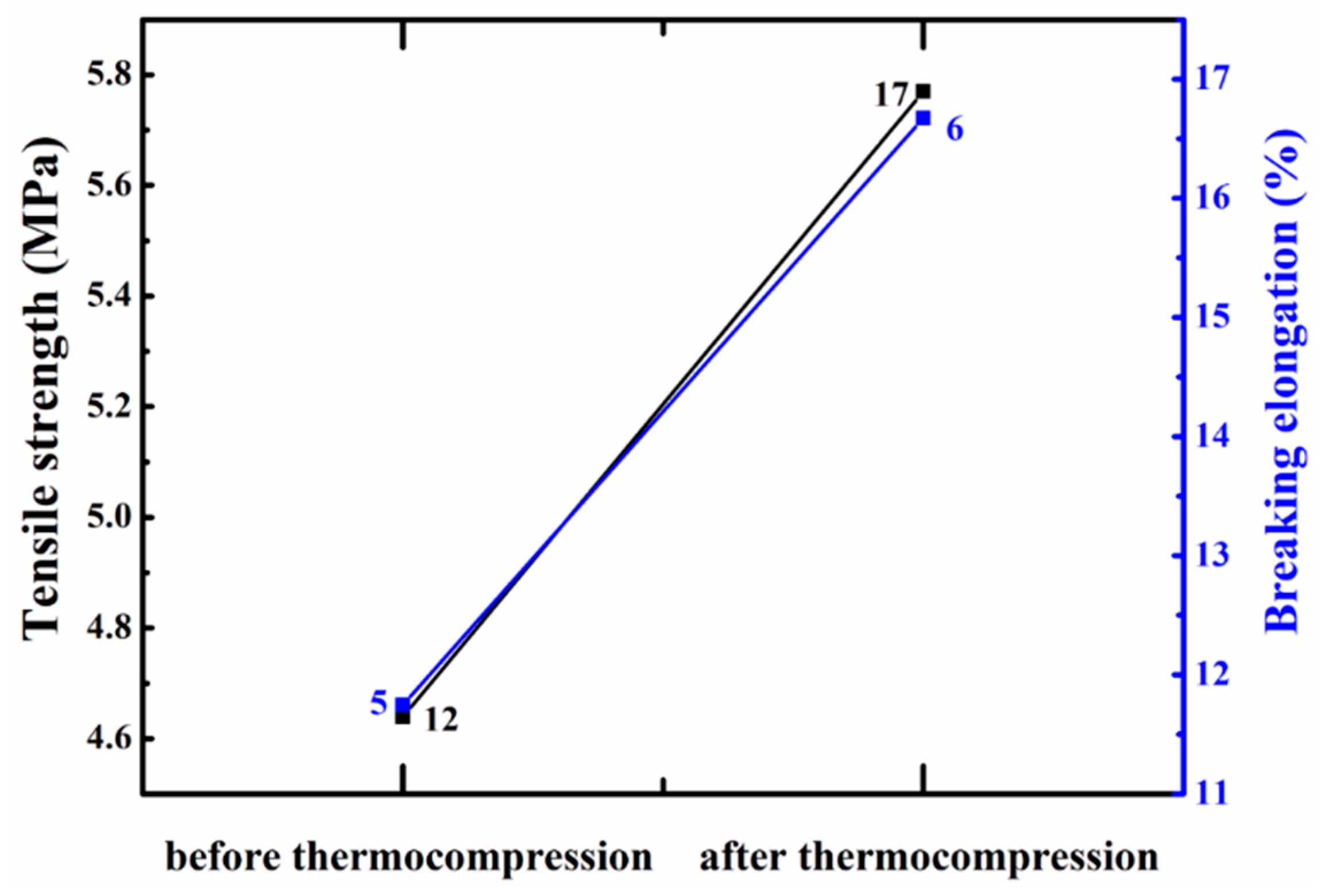