In Vivo Assessment of Bone Enhancement in the Case of 3D-Printed Implants Functionalized with Lithium-Doped Biological-Derived Hydroxyapatite Coatings: A Preliminary Study on Rabbits
Previous Article in Journal

The response of the human body to implanted biomaterials involves several complex reactions. The potential success of implantation depends on the knowledge of the interaction between the biomaterials and the corrosive environment prior to the implantation. Thus, in the present study, the in vitro corrosion behavior of biocompatible carbonitride-based coatings are discussed, based on microstructure, mechanical properties, roughness and morphology. TiCN and TiSiCN coatings were prepared by the cathodic arc deposition method and were analyzed as a possible solution for load bearing implants. It was found that both coatings have an almost stoichiometric structure, being solid solutions, which consist of a mixture of TiC and TiN, with a face-centered cubic (FCC) structure. The crystallite size decreased with the addition of Si into the TiCN matrix: the crystallite size of TiCN was 16.4 nm, while TiSiCN was 14.6 nm. The addition of Si into TiCN resulted in smaller Ra roughness values, indicating a beneficial effect of Si. All investigated surfaces have positive skewness, being adequate for the load bearing implants, which work in a corrosive environment. The hardness of the TiCN coating was 36.6 ± 2.9 GPa and was significantly increased to 47.4 ± 1 GPa when small amounts of Si were added into the TiCN layer structure. A sharp increase in resistance to plastic deformation (H3/E2 ratio) from 0.63 to 1.1 was found after the addition of Si into the TiCN matrix. The most electropositive value of corrosion potential was found for the TiSiCN coating (−14 mV), as well as the smallest value of corrosion current density (49.6 nA cm2), indicating good corrosion resistance in 90% DMEM + 10% FBS, at 37 ± 0.5 °C. View Full-Text
Keywords: titanium-based carbonitrides; coating; corrosion resistance; X-ray diffraction; nanoindentation; cathodic arc deposition titanium-based carbonitrides; coating; corrosion resistance; X-ray diffraction; nanoindentation; cathodic arc deposition
►▼ Show Figures 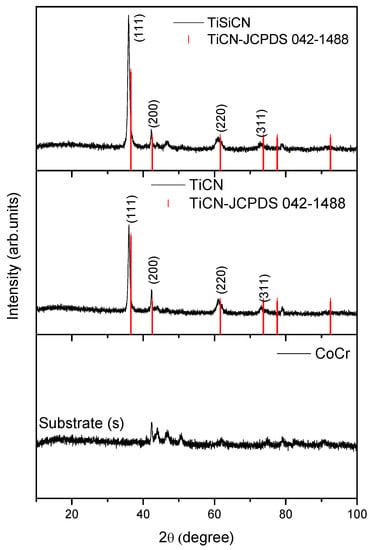