The Use of Edible Films Based on Sodium Alginate in Meat Product Packaging: An Eco-Friendly Alternative to Conventional Plastic Materials
Previous Article in Journal

The main function of food packaging is to maintain food’s quality and safety. The use of active packaging, including antimicrobial materials, can significantly extend the shelf life of food. Many of these packaging solutions are based on the application of polymer films containing metal nanoparticles (e.g., Ag, Au, Cu) or metal oxides (e.g., TiO2, ZnO, MgO). However, the use of iron nanoparticles is rarely mentioned. In the study, polylactide (PLA) films containing zero-valent iron (ZVI) were made by casting method. Pure PLA films and PLA films with the addition of Fe2O3 were used as comparative materials. The composition and structure of ZVI/PLA films were evaluated with scanning electron microscopy. The XRD spectra performed on ZVI/PLA films confirmed the presence of iron in the packaging material and revealed their oxide form (Fe2O3). The addition of zero-valent iron in the concentration 1%, 3%, or 5% resulted in the formation of crystallographic planes measuring 40.8, 33.6, and 28.6 nm, respectively. The color and gloss of the films, and their antimicrobial activity against bacteria (Bacillus subtilis, Escherichia coli, Staphylococcus epidermidis) and fungi (Geotrichum candidum, Rhodotorula rubra) were also examined. The PLA films with addition of 3% of ZVI (w/w) inhibited the growth of all tested organisms in contrast to PLA and PLA/Fe2O3 films. The addition of ZVI to polymer matrix caused changes in its appearance and optical properties. The ZVI/PLA coating used on polyolefin film allowed to extend the shelf life of goat cheese packed in examined material to 6 weeks. Considering the antimicrobial properties of the ZVI/PLA films and PLA biodegradability the obtained material can be successfully applied in the food industry. View Full-Text
Keywords: active packaging; zero-valent iron; antimicrobial coating; food packaging active packaging; zero-valent iron; antimicrobial coating; food packaging
►▼ Show Figures 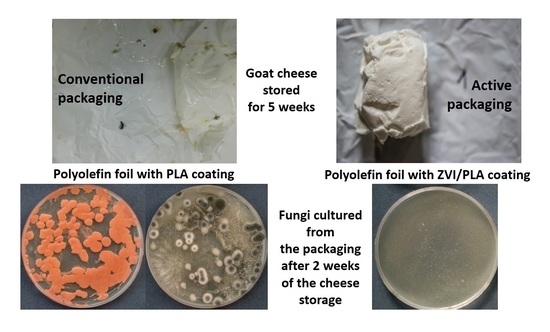