Coated alkali vapor cells with paraffin coating have been extensively investigated because of their long spin-polarization lifetime and high detection sensitivity for application in a wide range of atomic sensors, such as atomic magnetometers, atomic clocks, and magneto-optical traps [1,2,3,4]. The paraffin coating can extend dwell times of spin-polarized Rb atoms to 1.8 μs compared to that of an uncoated cell [5], which can support approximately 10,000 polarization-preserving collisions with an alkali atom in cells [6,7,8]. Therefore, the coating of alkali metal vapor cells and its mechanism on alkali metal atoms have attracted extensive attention [8,9,10].
Conventional paraffin coatings can be obtained by casting and cold-finger methods, which form paraffin crystals with three stages: nucleation, growth, and aggregation or coalescence of the paraffin crystals [11,12]. A chemical vapor deposition system can also be used to deposit amorphous carbon-based films in methane (CH4) gas [13]. However, it is reported that the paraffin coatings produced using the above methods always result in uneven morphology, and their relaxation times of the alkali metal atoms are relatively short.
By contrast, the coating performance is mainly measured by the relaxation time of the alkali metal vapor cell through optical quantum detection [14,15,16,17]. Seltzer successfully developed an alkali test cell to test the antirelaxation properties of surface coatings and found that the antirelaxation quality changes as a function of temperature [7]. Bandi et al. successfully measured the T1 and T2 relaxation times to characterize the wall coating and found that a polarized Rb atom undergoes approximately 2255 wall collisions (at 300 K) before losing its polarized state [18].
Recently, some researchers began to investigate the coating performance beyond relaxation-time-combined surface analyses, such as morphology, infrared spectroscopy, and NEXAFS spectra [19,20,21,22]. Rampulla et al. investigated the morphology and composition of coated Rb vapor-exposed films and found that an alkali island formed on the surface could affect the antirelaxation behavior of organic coatings [1]. Seltzer et al. studied the light-induced atomic desorption yields combined with a variety of surface characterization methods and found that measuring and determining the crystallinity of the coating material is unnecessary [21]. However, there are still two points that researchers seldom concentrate on, which are especially critical for the sensitivity of the atomic sensors. One is the method of producing alkali vapor cells with paraffin coating, whose performance cannot be predictable during the fabrication process. The second point is the adhesion effect, occurring during the energy transfer in the process of surface adsorption [11], which seriously affects the hyperfine frequency shift closely related to the relaxation time for the alkali-metal atoms that interact with the paraffin coating.
In this research, we investigated the energy transfer of the substrate during the evaporation process by comparing three preparation methods and found the method of preparing a uniform paraffin coating. Furthermore, with the peak force tapping AFM (atomic force microscopy) technique, the relationship between the adhesion effect of the paraffin coating and the hyperfine frequency shift of the alkali metal vapor cell was studied. From the result, it can be seen that the surface of the paraffin coating prepared by the closed-type precise temperature-controlled evaporation method with uniform temperature field was the flattest and smoothest; the roughness was 0.214 nm, and the adhesion was 20 pN. Moreover, by force spectrum analysis, it is found that the adhesion jumps occur at the edge of the particles and the steps, and when the height fluctuation of the coating is less than 1 nm, the viscosity of the adhesion is lower than 6 pN. Compared with the silicon substrate, it was found that the paraffin coating can significantly reduce the energy loss caused by the adhesion. Finally, we calculated the surface adsorption energy of the paraffin coating by analyzing the energy transfer of the force curve measurement, which provides a new idea for estimating the relaxation and the hyperfine frequency shift of alkali metal vapor cells.

Crystalline silicon (Si samples) supplied by Nano Material was used as substrates for paraffin evaporation. The surface of the substrate, with diameter dimensions of Ø 50.8 × 0.5 mm, was washed with isopropyl alcohol in an ultrasonic bath and then rinsed by deionized water [11]. The substrate’s mechanical properties, given in Table 1, were supported by SCI-TECH innovation.
Here, three methods to produce paraffin coating—namely, open-type evaporation, the closed-type rapid cooling evaporation, and closed-type precise temperature-controlled evaporation—are proposed. Closed-type precise temperature-controlled evaporation and closed-type rapid cooling evaporation are collectively called closed-type evaporation. The paraffin used in this work is a mixture of long-chain hydrocarbons with chain lengths ranging from C19 to C49 with linear, ramified, even and odd chains [11].
The paraffin with the weight of 4 g was stored in a paraffin container and heated by the heating platform, which is under the paraffin container, as illustrated in Figure 1. Each evaporation device consists of a heating platform and a paraffin container with a silicon substrate fixed on it. Figure 2 illustrates the schematic of the closed-type precise temperature-controlled evaporation system. The evaporation system consists of a temperature probe, a voltage supply, a PC, an evaporation chamber, and a PI controller with integrated data acquisition. The temperature is measured by the PI controller using a probe placed on the sample inside the evaporation chamber. The proportional integral algorithm is used to calculate the drive current based on the deviation, and the upper and internal heaters are driven by the voltage supply to realize the internal high-precision temperature in the heat container.
After preparation, the specimens were submitted to surface characterization using an ICON (Bruker, Germany) AFM. The AFM operating in the peak force tapping (PFT) mode was applied to investigate the topography and adhesion of paraffin coating on Si substrates [22,23,24,25,26,27]. To ensure the accuracy of the experimental results, the cantilever spring constant was calibrated using a pure crystalline silicon sample and a calibration algorithm prior to peak force measurement [28,29,30].
Figure 3 illustrates the force curve and mechanical properties that can be obtained from it in the peak force tapping mode. The below red line indicates the measured force in the process of approaching the sample, and the corresponding black line is the measured force in the process of withdrawing from the sample. When the probe approaches the sample from a distance, the probe is subjected to the attractive force (mainly van der Waals force and electrostatic force) as a negative force. The repulsive and attractive force reach equilibrium at point A. Then the force between the probe and the sample reaches the peak at point B, which maintains constant in PFT mode through system feedback [29]. In the withdraw process, the force shows a difference between point C and point B, which were called pull-out points. Additionally, the force spectrum information of the surface can be obtained by measuring the force spectrum for the surface, and the adhesion, dissipation, deformation, and other information of the sample can be obtained by a fitting analysis.

In this work, we successfully obtained a relatively flat paraffin coating with closed-type precise temperature-controlled evaporation and explored the adhesion effect on the hyperfine frequency shift of alkali metal vapor cell using the peak force tapping technique from simultaneous topography and adhesion information, which involves the energy transfer mechanism of the alkali atom colliding with vapor cell wall. We found the uniform and appropriate temperature of the surface benefit breaking the surface diffusion barrier, allowing the nucleated paraffin particles to aggregate and form a continuous paraffin coating. We also observed the different height of paraffin with the same adhesion and peak adhesion appear at the junction of paraffin particles and the substrate, which shows that the adhesion is only affected by the uniformity of the coating surface.
In addition, we investigated the energy transfer between the alkali atom and the coating by analyzing the force curve. We found that the surface adsorption energy of the coating can be calculated accurately with peak force tapping technology, moreover, it provides us a new method to test the quality of alkali atom vapor cell. While it is still necessary to further verify the energy with that from a quantum detection experiment, which is subject to subsequent research.

The authors would like to express their sincere thanks to LetPub (www.letpub.com) for its linguistic assistance during the preparation of this manuscript. 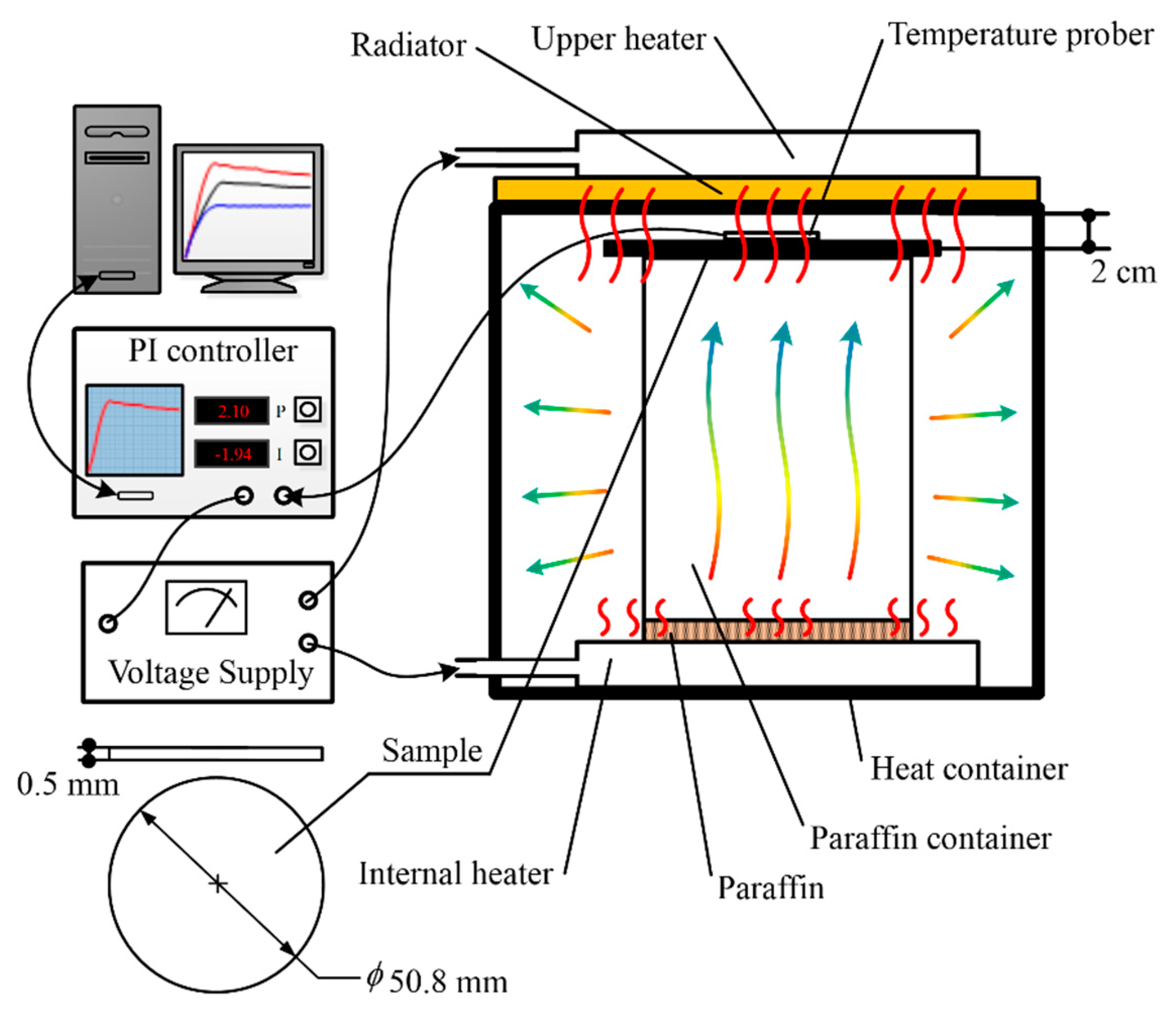 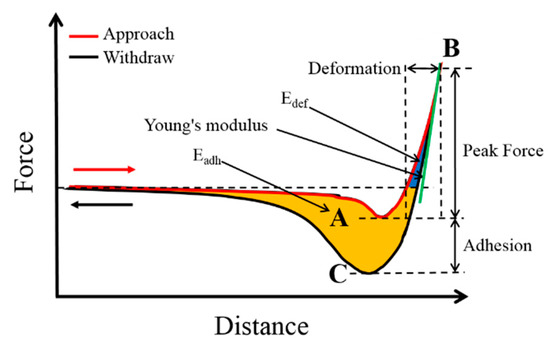 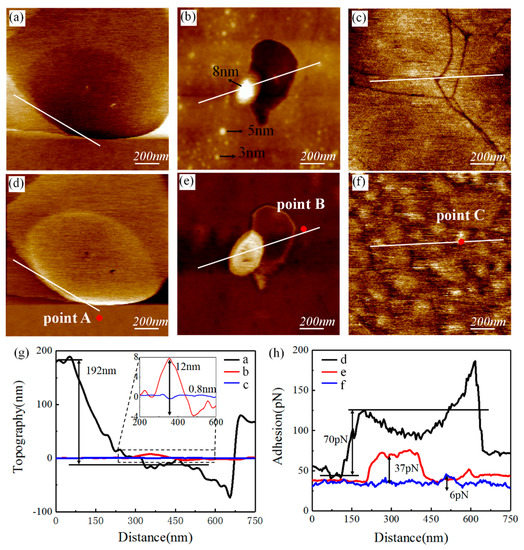 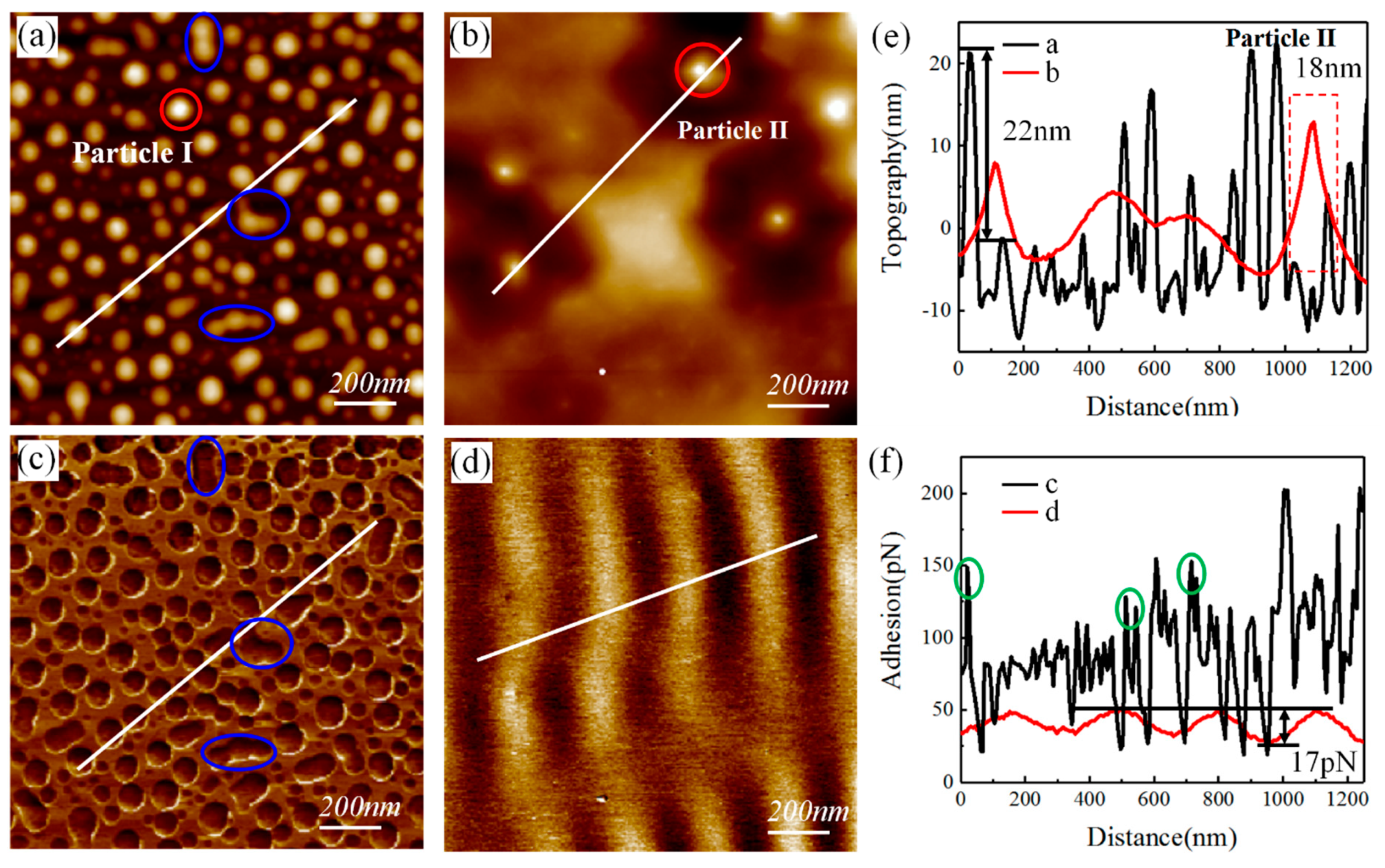 Table 1. Mechanical properties of silicon samples.
Table 1. Mechanical properties of silicon samples.
© 2020 by the authors. Licensee MDPI, Basel, Switzerland. This article is an open access article distributed under the terms and conditions of the Creative Commons Attribution (CC BY) license (http://creativecommons.org/licenses/by/4.0/).
We use cookies on our website to ensure you get the best experience. Read more about our cookies here.
Accept
We have just recently launched a new version of our website. Help us to further improve by taking part in this short 5 minute survey here. here.
Never show this again