In this study, biodegradable polyvinyl alcohol (PVA) was blended with natural antioxidant tea polyphenols (TPs) to produce PVA/TP nanofiber films by electrospinning. The effects of heat treatment and TP incorporation on the structural and physical properties of the films were then evaluated. Scanning electron microscopy (SEM) and Fourier transform infrared spectroscopy (FTIR) revealed that the PVA/TP nanofiber film has a more compact structure and better morphology than PVA alone. In addition, the water resistance was enhanced, and the formation of hydrogen bonds between the TP and PVA molecules increased via the heat treatment. Furthermore, the mechanical, antioxygenic, and antibacterial properties of the nanofiber films were significantly improved (P < 0.05) owing to the incorporation of TP. In particular, when the mass ratio of the PVA/TP was 7:3, the elongation at break (EAB) of the film increased to 105.24% ± 2.87%, and the antioxidant value reached a maximum at 64.83% ± 5.21%. In addition, the antibacterial activity of Escherichia coli (E. coli) and Staphylococcus aureus (S. aureus) increased to the maximum levels of 82.48% ± 2.12% and 86.25% ± 2.32%, respectively. In summary, our study produced a functional food packaging material that includes preservation with an acceptable bioactivity, ability to keep food fresh, and biodegradability. View Full-Text
Keywords: tea polyphenols; polyvinyl alcohol; heat treatment; water resistance; nanofiber film tea polyphenols; polyvinyl alcohol; heat treatment; water resistance; nanofiber film
►▼ Show Figures 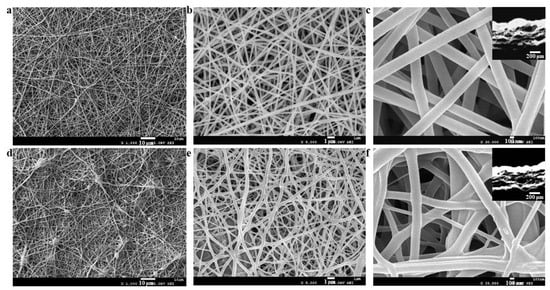