The Ascidian-Derived Metabolites with Antimicrobial Properties
Previous Article in Journal

A Quantitative Survey of Bacterial Persistence in the Presence of Antibiotics: Towards Antipersister Antimicrobial Discovery

Background: Bacterial persistence to antibiotics relates to the phenotypic ability to survive lethal concentrations of otherwise bactericidal antibiotics. The quantitative nature of the time–kill assay, which is the sector’s standard for the study of antibiotic bacterial persistence, is an invaluable asset for global, unbiased, and cross-species analyses. Methods: We compiled the results of antibiotic persistence from antibiotic-sensitive bacteria during planktonic growth. The data were extracted from a sample of 187 publications over the last 50 years. The antibiotics used in this compilation were also compared in terms of structural similarity to fluorescent molecules known to accumulate in Escherichia coli. Results: We reviewed in detail data from 54 antibiotics and 36 bacterial species. Persistence varies widely as a function of the type of antibiotic (membrane-active antibiotics admit the fewest), the nature of the growth phase and medium (persistence is less common in exponential phase and rich media), and the Gram staining of the target organism (persistence is more common in Gram positives). Some antibiotics bear strong structural similarity to fluorophores known to be taken up by E. coli, potentially allowing competitive assays. Some antibiotics also, paradoxically, seem to allow more persisters at higher antibiotic concentrations. Conclusions: We consolidated an actionable knowledge base to support a rational development of antipersister antimicrobials. Persistence is seen as a step on the pathway to antimicrobial resistance, and we found no organisms that failed to exhibit it. Novel antibiotics need to have antipersister activity. Discovery strategies should include persister-specific approaches that could find antibiotics that preferably target the membrane structure and permeability of slow-growing cells. View Full-Text
Keywords: bacteria; antibiotics; resistance; persisters; dormancy; time–kill; membrane transport; membrane transporters; lipopeptides bacteria; antibiotics; resistance; persisters; dormancy; time–kill; membrane transport; membrane transporters; lipopeptides
►▼ Show Figures 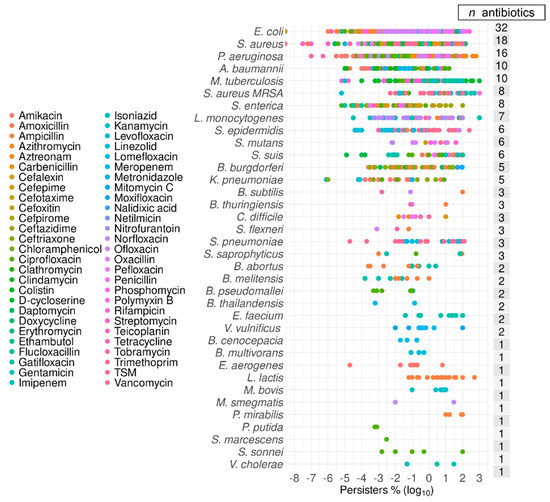 
Salcedo-Sora, Jesus Enrique, and Douglas B. Kell. 2020. "A Quantitative Survey of Bacterial Persistence in the Presence of Antibiotics: Towards Antipersister Antimicrobial Discovery" Antibiotics 9, no. 8: 508. https://doi.org/10.3390/antibiotics9080508