Antimicrobial Property and Mode of Action of the Skin Peptides of the Sado Wrinkled Frog, Glandirana susurra, against Animal and Plant Pathogens

Amphibians are widely distributed on different continents, except for the polar regions. They are important sources for the isolation, purification and characterization of natural compounds, including peptides with various functions. Innate immune antimicrobial peptides (AMPs) play a critical role in warding off invading pathogens, such as bacteria, fungi, parasites, and viruses. They may also have other biological functions such as endotoxin neutralization, chemotaxis, anti-inflammation, and wound healing. This article documents a bioinformatic analysis of over 1000 amphibian antimicrobial peptides registered in the Antimicrobial Peptide Database (APD) in the past 18 years. These anuran peptides were discovered in Africa, Asia, Australia, Europe, and America from 1985 to 2019. Genomic and peptidomic studies accelerated the discovery pace and underscored the necessity in establishing criteria for peptide entry into the APD. A total of 99.9% of the anuran antimicrobial peptides are less than 50 amino acids with an average length of 24 and a net charge of +2.5. Interestingly, the various amphibian peptide families (e.g., temporins, brevinins, esculentins) can be connected through multiple length-dependent relationships. With an increase in length, peptide net charge increases, while the hydrophobic content decreases. In addition, glycine, leucine, lysine, and proline all show linear correlations with peptide length. These correlations improve our understanding of amphibian peptides and may be useful for prediction and design of new linear peptides with potential applications in treating infectious diseases, cancer and diabetes. View Full-Text
Keywords: amino acid signature; amphibians; amphipathic helix; antimicrobial peptides; database; peptide design amino acid signature; amphibians; amphipathic helix; antimicrobial peptides; database; peptide design
►▼ Show Figures 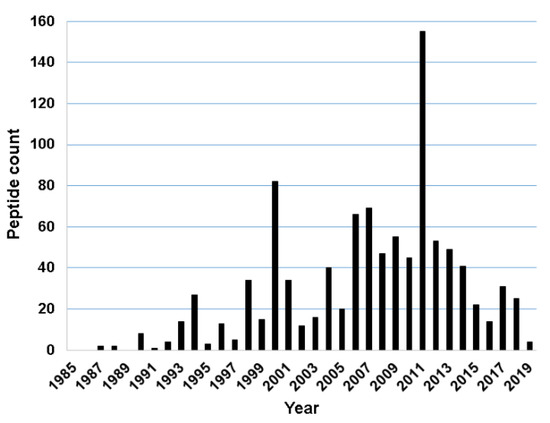