Tea Tree oil (TTO) is well known for its numerous good properties but might be also irritating or toxic when used topically or ingested, thus limiting the number of possible applications in Humans. The aim of the study was to characterize the antimicrobial spectrum as well as the toxicity of Titroleane™, a new anti-infective agent obtained from TTO but cleared of its toxic monoterpenes part. The susceptibility to Titroleane™ of various pathogens (bacteria and fungi) encountered in animal and human health was studied in comparison with that of TTO. Antimicrobial screening was carried out using the broth microdilution method. Activities against aerobic, anaerobic, fastidious and non-fastidious microorganisms were performed. For all microorganisms tested, the MIC values for Titroleane™ ranged from 0.08% to 2.5%, except for Campylobacter jejuni, and Aspergillus niger. In particular, Titroleane™ showed good efficacy against skin and soft tissue infection pathogens, such as methicillin resistant Staphylococcus aureus (MRSA), intra-abdominal infections and oral pathogens, as well as fish farming pathogens. Toxicity testing showed little and similar cytotoxicities between TTO and Titroleane™ of 37% and 23%, respectively at a concentration of 0.025% (v/v). Finally, we demonstrated that the antimicrobial activity of Titroleane™ is similar to that of TTO.
Keywords: Titroleane™; Tea Tree oil; antimicrobial activity; bacteria; fungi Titroleane™; Tea Tree oil; antimicrobial activity; bacteria; fungi

Over the past decade, many investigations have supported the activity of Tea Tree oil (TTO) against microbes and parasites [1,2,3]. The antimicrobial activity of TTO has been attributed to several molecules, such as terpinen-4-ol, α-terpineol, linalool, α-pinene, β-pinene and 1,8-cineole, as well as α-terpinene, γ-terpinene and p-cymene as antibacterial molecules and terpinolene as antifungal [3,4,5,6,7,8,9,10,11,12,13,14].
However, some of these molecules (or their oxidation product) are known to be toxic and irritant and are considered as allergens. This includes terpinolene, γ-terpinene, α-pinene, 1,8-cineol and p-cymene [15,16]. Because of these monoterpenes, batches of TTO can have very different toxicological profiles [17]. In order to regulate the quality of TTO, the international Standard ISO 4730, describes the requirements in the amounts of the different compounds.
A proprietary owned process of the fractionation of SETUBIO led to a derivative TTO named Titroleane™, by releasing the monoterpenes contained in TTO [18]. It is enriched in active molecules, such as monoterpenes alcohol—previously identified by Southwell et al. [19] and Carson and Riley [20]—at a guaranteed concentration >60%, with a minimal monoterpenes concentration of <5% instead of 40% in standard TTO. In addition to the production of Titroleane™, a second fraction, called Fraction 2, is generated, mostly composed of monoterpenes. The aim of the study is to evaluate the antimicrobial spectrum of Titroleane™ and to validate that, even with the removal of toxic and irritating molecules (also known for their antimicrobial properties), the activity of Titroleane™ is similar to that of TTO. Industrial applications and other potential properties of Titroleane™ will also be discussed.

As GC-FID analyses on three productions of Titroleane™ have demonstrated similar compositions (data not shown), we also wanted to test the homogeneity of our process by evaluating the antibacterial activity of different batches. Consequently, four different and independent batches (i.e., B1, B2, B3 and B4) were tested for their antibacterial activity against Escherichia coli, Staphylococcus aureus and Yersinia enterocolitica. They demonstrated the same antibacterial activity—the susceptibility of E. coli, S. aureus and Y. enterocolitica to the different productions of Titroleane™ ranged from 2.5% to 1.25%, as shown in Table 2.

MICs were performed on forty-nine bacteria and five fungi to define the antimicrobial spectrum of Titroleane™. There was no clear trend of inhibition depending on the characteristics of the bacterial strains, as shown in Table 4. Regarding Gram-positive bacteria, Titroleane™ showed good activity toward Bacilliales and Lactobacilliales, with MIC ranging from 0.62% to 2.5% and from 1.25% to 2.5%, respectively. Similar results were obtained for C. xerosis (MIC = 1.25%), and Clostridium sp. (MIC = 0.62% to 2.5%). Titroleane™ showed good efficiency on wild type S. aureus and E. coli (MIC = 0.62%), as well as against MRSA (Methicillin-Resistant S. aureus) (MIC = 1.25%). Considering the inhibition of spore germination, Titroleane™ had a good anti-germination effect on B. atrophaeus spores at 0.62%. Within Gram-negative bacteria, Enterobacteriales, which are of higher concern in threats, were the most sensitive to Titroleane™ (MIC = 0.31% to 1.25%). Bacteroidales were also very susceptible to Titroleane™, mostly B. fragilis with a MIC at 0.08%. Titroleane™ also showed antifungal activity against Candida sp. (MIC = 1.25%), and the mould M. furfur (MIC = 1.25%). No activity was observed against A. niger at tested concentrations.

2.5. Activity of Titroleane™ versus TTO

2.6. Cytotoxicity of TTO versus Titroleane™

The cytotoxicity of Titroleane™ was evaluated on human fibroblast in comparison to TTO, as shown in Figure 1. A low and stable concentration of solvent (DMSO) was used to minimize the impact on cell viability. In the same way, extracts were tested at low concentrations, ranging from 0.025% to 0.006%. The control SDS shows significant cytotoxic activity at a rate of 98%. Little toxicity was recorded with a maximum of 37% with TTO and a significant 23% with Titroleane™ at a concentration of 0.025%. No cytotoxicity was measured at 0.006% for both extracts.

TTO’s fractionation was performed by distillation. TTO was loaded on a fractionating Vigreux-type column (with finger indentations) of 3 m high and 10 cm diameter, at 72 °C at the head of the column. The distillation of TTO was used to separate the mixture into two fractions, based on their volatilities. The fraction containing sesquiterpenes and alcohols was named Titroleane™, while the fraction mostly composed of monoterpenes was named Fraction 2.
Batches were stored in 10 L or 20 L high density polyethylene containers. Samples were collected in 60 mL polystyrene flasks and stored at 22 °C and protected from light. In order to evaluate the impact of the composition on plastic containers, 60 mL polystyrene flasks were observed after two months. Batch B2 and associated TTO and fraction 2 were used for the visual observation.

Four industrial batches of Titroleane™, named B1, B2, B3 and B4, were produced at different times. If not specified, Titroleane™ refers to batch B2. The antimicrobial efficacy of these batches was tested on an initial set of three bacterial species: Escherichia coli as a Gram-negative model, Staphylococcus aureus as a Gram-positive model and Yersinia enterocolitica as a foodborne model. Assays were performed once immediately after production.

To enhance the solubility of TTO and Titroleane™, Dimethyl sulfoxide (DMSO) (Sigma Aldrich, Saint-Quentin-Fallavier, France) was used as a solvent. Oils were diluted at 10% final volume (v/v) in 10% DMSO. All experiments were performed simultaneously with a control solution of 10% DMSO.

Plates with isolated colonies were incubated for two weeks at 37 °C, then used to prepare a highly concentrated suspension in TPS solution. The suspension was pasteurized at 80 °C during 20 min to kill all remaining vegetative cells. The number of spores was then counted using a Malassez cell-counting chamber and diluted to 106 spores mL−1.

MICs values were measured using the microdilution broth method, according to the Clinical and Laboratory Standards Institute guidelines [74], with modification on the broths used to fit with organism requirements for growth. Indeed, some authors have shown that there are no significant differences, depending on the culture medium used (i.e. Sabouraud dextrose broth (SDB), RPMI and Christensen’s urea broth (CUB)) for the determination of MICs using the broth microdilution (BMD) method, recommended by the CLSI [75]. Hence, standard protocol was adapted to fungi as follows: fungi were diluted at 105 CFU mL−1 in Sabouraud broth (Candida albicans, Candida kefyr, Candida tropicalis, Aspergillus niger) or Sabouraud broth + 20% olive oil (Malassezia furfur); plates were incubated aerobically at 30 °C and analyzed after 48 h; then, 96-well microplates were prepared with three controls—growth control without product, negative control without bacteria, and solvent control (DMSO from 2.5% to 0.0049%); wells were prepared by serial dilutions from 2.5% to 0.0049% with 50 µL of product and 50 µL of suspension; microplates were then incubated in growth conditions defined above, then MICs were read visually. The same batch of Titroleane™ was used for the whole spectrum study. A two-fold variation between two MICs, corresponding to one dilution, was considered as non-significant.

Human foreskin fibroblast cell lines were purchased from ATCC collection SCRC-1041. Cells were grown in MEM (10370-047, Gibco, Paisley, UK) with the addition of 10% heat-inactivated fetal bovine serum (10270, Gibco, Paisley, UK), 2 mM of L-glutamine (P04-80100, PAN™ biotech, Aidenbach, Germany), 100 µg mL−1 ampicillin (A9518, Sigma-Aldrich, Saint-Quentin-Fallavier, France), 0.1 mU mL−1 of penicillin–streptomycin (P4333, Sigma-Aldrich, Saint-Quentin-Fallavier, France) and 2.5 µg mL−1 of amphotericin B (P06-01050, PAN™ biotech, Aidenbach, Germany). Cells were maintained at 37 °C in a 5% CO2 humidified atmosphere. The cytotoxicity was carried out by Neutral Red coloration assay for investigating cell viability [76]. Cells were seeded on 96-well plates, at a concentration of 105–106 cells per mL in completed MEM, and incubated for 24 h. Various concentrations of samples, all prepared in 0.3% DMSO (final concentration in wells v/v) and sonicated for 10 min before use, were then added to wells with a final volume of 200 µL. Negative (no treatment), solvent (DMSO 0.3%), and positive (0.1% SDS, BP166, Fisher Scientific, Villebon-sur-Yvette, France) controls were included. Each condition was tested three times per assay. Exposure periods of 24 h were chosen for determining and comparing the in vitro cytotoxicity potential of samples. After incubation, the supernatant was removed and cells were washed three times with PBS (10010-015, Gibco, Paisley, UK) before adding Neutral Red (229810250, ACROS Organics Antwerp, Belgium) and solution prepared in completed MEM at 0.005% (v/v). The plate was then incubated for an additional 3 h. The Neutral Red solution was washed three times in PBS, the coloration was solubilized in acetic acid 1%:ethanol 50% (v/v) and the absorbance was measured at 540 nm using a microplate reader (Infinite M200 pro, Tecan, Crailsheim, Germany). The cell survival rate was determined by comparing the absorbance values obtained with treated cells and with DMSO.

The data were analyzed using a one-way ANOVA Dunnet statistical analysis, which allows for the comparison of data to a control—here the solvent control [77]. Statistical analysis was carried out with the free online SAS version (SAS Studio version 9.4), with the use of Oracle VM VirtualBox version 5.1, and VMware Player version 5.0 (SAS University Edition).

The following are available online at https://www.mdpi.com/2079-6382/9/7/391/s1, Figure S1: Impact of extract composition on plastic containers after two-month storage.

B.J. and J.-C.S. are employees of SETUBIO SA; J.-C.S. is president and stockholder of SETUBIO SA.; R.E.D. is Professor of Clinical Microbiology in the Faculty of Pharmacy of Université de Lorraine. 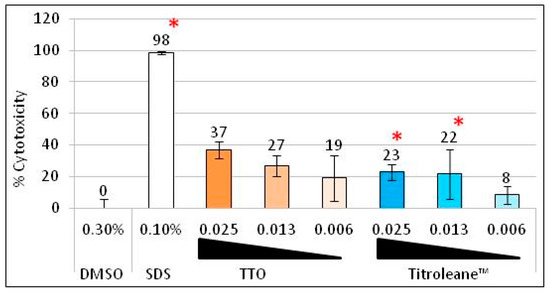 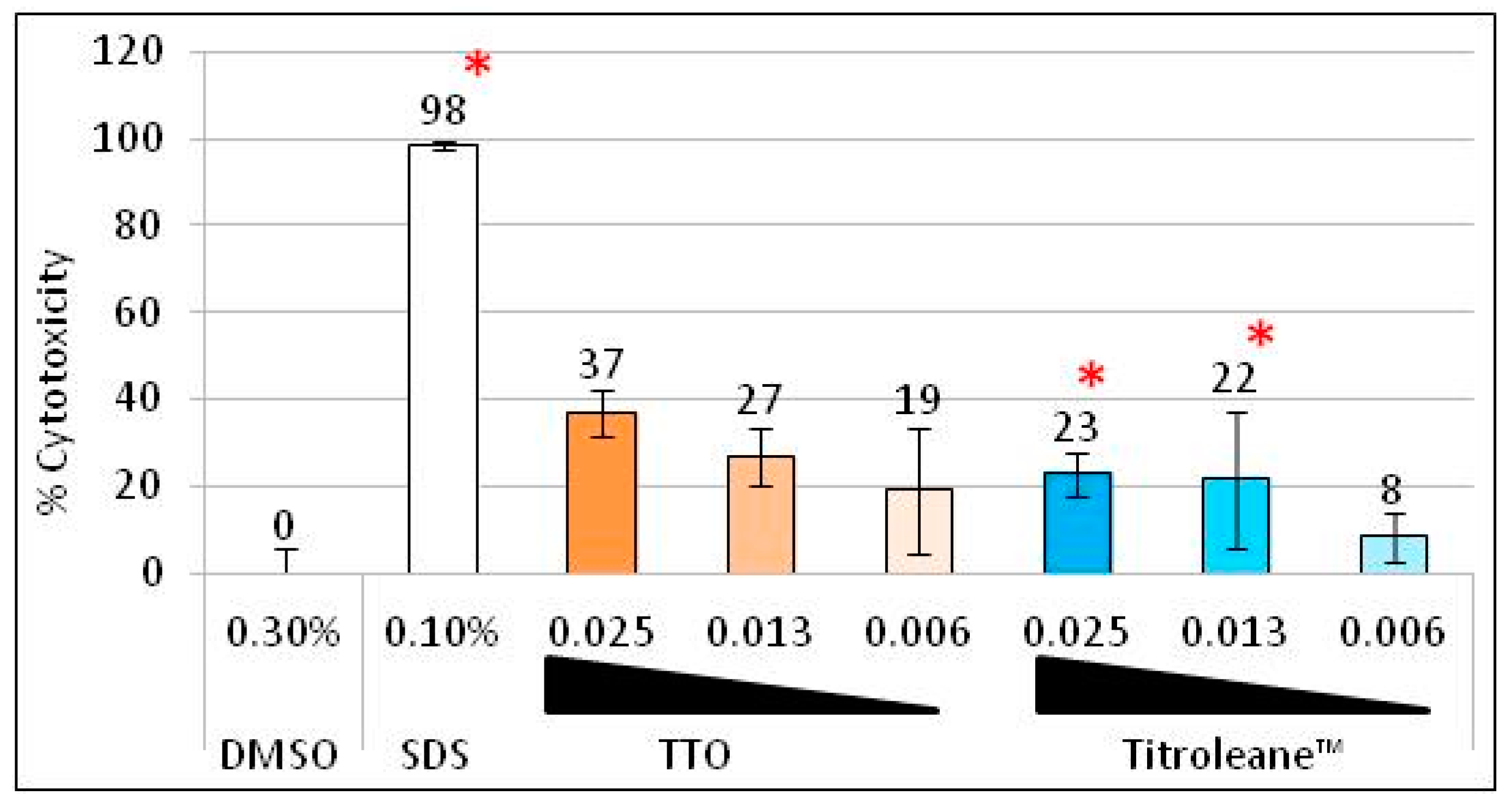