The Inhibitory Effect of Plant Extracts on Growth of the Foodborne Pathogen, Listeria monocytogenes
Previous Article in Journal

Anti-Infectious Plants of the Thai Karen: A Meta-Analysis

Pharmacology has developed many drugs to treat infections, but many people, especially in developing countries, cannot afford to purchase them, and still depend on traditional knowledge and local medicinal plants to fight off infections. In addition, numerous microbes have developed resistance to the pharmaceutical drugs developed to fight them, and for many, such as Covid-19, effective drugs remain to be found. Ethnomedicinal knowledge is useful, not only for local people as a source of medicine for primary health care, but also for new pharmacological discoveries. This study aimed to identify the plants that the Karen, the largest hill-tribe ethnic minority in northern and western Thailand, use for treatments of infectious diseases. We present a meta-analysis of data from 16 ethnobotanical studies of 25 Karen villages with the aim of understanding traditional knowledge and treatments and point to potential plants for further pharmacological development. The Karen used 127 plant species from 59 plant families to treat infections and infectious diseases. The Cultural Important Index (CI) showed that the Leguminosae, Euphorbiaceae, Asteraceae, Lauraceae, Apocynaceae, Menispermaceae, and Lamiaceae were the most commonly used families. As for species, Cleidion javanicum, Tinospora crispa, Litsea cubeba, Aesculus assamica, Tadehagi triquetrum, Senna alata, Tithonia diversifolia, Embelia sessiliflora, and Combretum indicum were the most commonly used in treatments of infectious diseases. We suggest that these plant species should be the first to be pharmacologically tested for possible development of medicines, and the remaining species registered should subsequently undergo testing. View Full-Text
Keywords: ethnobotany; ethnomedicinal plants; infectious diseases; antimicrobial; bacterial; fungal; viral; Tinospora crispa; Cleidion javanicum; Litsea cubeba ethnobotany; ethnomedicinal plants; infectious diseases; antimicrobial; bacterial; fungal; viral; Tinospora crispa; Cleidion javanicum; Litsea cubeba
►▼ Show Figures 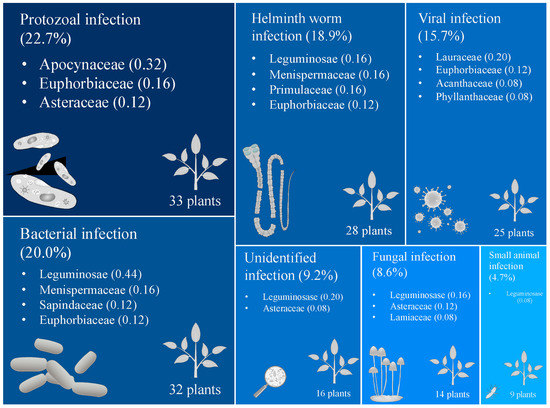