Extraintestinal Clostridioides difficile Infections: Epidemiology in a University Hospital in Hungary and Review of the Literature
Previous Article in Special Issue

Properties of an Antimicrobial Molecule Produced by an Escherichia coli Champion

More Than a Pore: A Current Perspective on the In Vivo Mode of Action of the Lipopeptide Antibiotic Daptomycin

Daptomycin is a cyclic lipopeptide antibiotic, which was discovered in 1987 and entered the market in 2003. To date, it serves as last resort antibiotic to treat complicated skin infections, bacteremia, and right-sided endocarditis caused by Gram-positive pathogens, most prominently methicillin-resistant Staphylococcus aureus. Daptomycin was the last representative of a novel antibiotic class that was introduced to the clinic. It is also one of the few membrane-active compounds that can be applied systemically. While membrane-active antibiotics have long been limited to topical applications and were generally excluded from systemic drug development, they promise slower resistance development than many classical drugs that target single proteins. The success of daptomycin together with the emergence of more and more multi-resistant superbugs attracted renewed interest in this compound class. Studying daptomycin as a pioneering systemic membrane-active compound might help to pave the way for future membrane-targeting antibiotics. However, more than 30 years after its discovery, the exact mechanism of action of daptomycin is still debated. In particular, there is a prominent discrepancy between in vivo and in vitro studies. In this review, we discuss the current knowledge on the mechanism of daptomycin against Gram-positive bacteria and try to offer explanations for these conflicting observations. View Full-Text
Keywords: daptomycin; lipopeptide antibiotic; mechanism of action; membrane domains; membrane fluidity daptomycin; lipopeptide antibiotic; mechanism of action; membrane domains; membrane fluidity
►▼ Show Figures 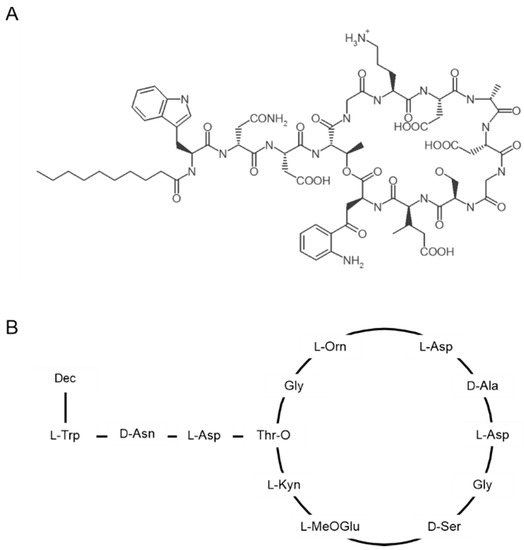 Gray, D.A.; Wenzel, M. More Than a Pore: A Current Perspective on the In Vivo Mode of Action of the Lipopeptide Antibiotic Daptomycin. Antibiotics 2020, 9, 17.


Gray DA, Wenzel M. More Than a Pore: A Current Perspective on the In Vivo Mode of Action of the Lipopeptide Antibiotic Daptomycin. Antibiotics. 2020; 9(1):17.


Gray, Declan A.; Wenzel, Michaela. 2020. "More Than a Pore: A Current Perspective on the In Vivo Mode of Action of the Lipopeptide Antibiotic Daptomycin." Antibiotics 9, no. 1: 17.