Uptake, Translocation, and Stability of Oxytetracycline and Streptomycin in Citrus Plants
Previous Article in Journal

Of the 138 registered drug shops, 45 (32.6%) exclusively sold products for aquaculture. The owners of the remaining 93 veterinary drug shops (i.e., those targeting terrestrial animals) (50 in Cao Lanh, 43 in Thap Muoi) were interviewed. Demographic information and business activities of these shops are described in Table 1. Most (66.7%) owners were male and of a median age of 40 [IQR 36–51] years-old. The majority (59.1%) of veterinary shop owners had a vocational (animal science) qualification obtained in a technical college, whilst the remainder had a degree in veterinary medicine. One owner had a post-graduate (Master’s) degree. Farmers were the main customer of these establishments (median 100% [IQR 90–100]), followed by animal health workers (mentioned by 36.6% veterinary drug shop owners). The median number of staff members (including the owner) working in each shop was 2 [IQR 1–2], the respective values were 2 [IQR 2–2] and 2 [IQR 1–2] for Cao Lanh and Thap Muoi. In term of staffing capacity, the median value was 12 person-days [IQR 7–14] per week, 14 [IQR 9–14] for Cao Lanh and 10 [7,8,9,10,11,12,13,14] for Thap Muoi drug shops. There were 5 (5.4%) shops staffed by personnel adding a total of 22.5–28.0 days/week. A total of 53 (57%) shop owners had links with the local veterinary authority (Sub-Department of Animal Health of Dong Thap, SDAH-DT) (50% in Cao Lanh and 65% in Thap Muoi). Of those, 6 (6.5%) shop owners were currently working at SDAH-DT. A total of 68.8% of shops provided loan services to farmers for specific goods, consisting of commercial feed (60.2% shops) and veterinary medicines (34.4%). Of the total income of antimicrobial sales, products for pig farming represented 30% [IQR 15–60%] income, followed by ducks (20% [IQR 13–40%]), chickens (15% [IQR 10–25]), aquatic species (0% [IQR 0–3]) and other (cows, goats) (2 [IQR 0–10]) respectively. Diagnostic services (including post-mortem necropsy) were available in 57% drug shops (76.0% in Cao Lanh and 34.8% in Thap Muoi).
The types of commodities and services offered by veterinary drug shop are displayed in Figure 1. A total of 85% shops retailed commercial feed, representing a median of 50.0% [IQR 20.0–70.0] of total income across shops. All shops dispensed antimicrobial products and other health-related products. Antimicrobial sales represented a median of 15.0% [IQR 6.0–25.0] of income. Non-antimicrobial drugs health-related products represented a median income of 16.0% [IQR 8.0–27.0] of income). A total of 11.8% and 3.2% veterinary drug shops respectively offered services, such as selling day-old chicks and collecting slaughtered-age chickens.

2.3. Correlation between Number of Veterinary Drug Shops and Livestock Population

There were no significant correlations between the number of veterinary drug shops and the total animal bodyweight, as well as each of the three major species (duck, chicken and pig) at commune level. The Spearman’s rank correlation coefficients were of 0.20, 0.19, 0.08 and 0.17 respectively, (all p > 0.280). Similarly, the animal population of total bodyweight and three species of duck, chicken and pig were also not significantly correlated with the staffing capacity per commune (all p > 0.520), the correlation coefficients were 0.07, 0.12, 0.05 and 0.06 respectively. (Table S2, Figure S1).

To our knowledge, this is the first study describing veterinary drug shops and their linkages with farmers in a low- and middle-income country. Our results indicate a poor spatial correlation between veterinary drug shops and animal populations at commune level. This is consistent with our observation that farmers often purchase antimicrobials from shops for reasons other than geographical proximity, preferring to travel to longer distances. In contrast, the provision of services (diagnostics, vaccination support, advice on flock health) were major factors influencing the farmers’ choice/s of veterinary drug shop.
According to the farmers’ opinions, antimicrobial retail prices had little impact on their specific choice of veterinary drug shop. This is consistent with a previous study conducted in the area, where poultry farmers stated that they would be willing to accept a three to four-fold hike in prices without altering their AMU behaviour [16]. It has been shown that antimicrobials intended for veterinary use are extremely affordable in the region (average of 0.56 cents of a USD per kilogram treated) and represent only a small fraction of overall chicken production costs [12]. We found that, despite high levels of AMU by chicken flocks in the area [15], antimicrobial sales represented a relatively small fraction of the total income of veterinary drug shops. There were, however, the large difference across establishments.
We found interesting differences in antimicrobial sales depending on the geographical location and the profile of the shop owner. Shops in Thap Muoi district obtained a higher fraction of their income from antimicrobial sales. However, this was explained by a higher fraction of drug shops in this district that did not offer diagnostic services. Interestingly, the provision of diagnostic services was not linked to the shop being owned by a fully qualified veterinarian (data not shown). Antimicrobials were more likely sold in establishments where diagnostic support services, even basic (i.e., post-mortem), were not available. This is consistent with studies in human medicine showing that uncertainty of diagnosis or the absence of diagnostic facilities is factors leading to an excessive prescription of antimicrobials [19,20].
The higher density of pharmacies in Cao Lanh district is likely to result in competition among shop owners and be reflected in more likely availability of diagnostic services in their shops. Despite differences observed in antimicrobial sales and staff capacity in shops in these two districts, a previous study identified larger overall levels of AMU among chicken farmers in this district [8]. This was probably explained by a larger number of veterinary drug shops accessed by farmers in this district.
We mapped out veterinary drug shops and related these to animal bodymass. A previous study conducted in one district within Ho Chi Minh City estimated that there were 301 drug shops for a resident human population of 396,175 people [21]. Assuming an average bodyweight of 50 kilograms per person, we calculate that one pharmacy supplied to a total of 65.8 tonnes of human bodyweight. In contrast, in our study, there was one veterinary drug shop for 26.3 tonnes of animal bodyweight (i.e., 2.5 times higher than human drug shops).
Our study had a number of limitations: We only interviewed drug shop owners, even though other persons for which we did not gather information often staffed these shops. Also, there were a number of veterinary drug shops falling outside the district boundaries. This was more likely for farms located close to the edges of the district (data not shown). This may have resulted in an underestimation of the distances between farms and their chosen drug shops. We focused on small- scale chicken farms since small-scale farming is the most common type of farming system in the Mekong Delta and elsewhere in Southeast Asia. The chosen farms had already been enrolled as part of a large field-based project (www.viparc.org), and previous data indicated exceptionally high levels of AMU in these systems. We believe that, to a certain extent, our findings can be extrapolated to small farms raising other poultry species and pigs in the region.

The study was conducted in two districts (Cao Lanh and Thap Muoi) within Dong Thap province (Mekong Delta of Vietnam) in October 2018. These two districts had a combined area of 982.6 km2, representing 27% of the whole province, and have a combined population of 313,445 people (population density 319 people/km2). Rice and fruit crops, as well as raising livestock (pigs, cattle, goats) and poultry (ducks, chickens and Muscovy ducks) are the main economic activities in this rural area. Data on animal populations by commune (an administrative sub-division within the district) were provided by the Sub-Department of Animal Health of Dong Thap (SDAH-DT) (official census, 2017). In Cao Lanh and Thap Muoi districts, there were a combined population of 732,337 ducks, 163,572 chickens, 35,647 pigs, 7843 Muscovy ducks, 2934 cows, 1160 goats, and 784 geese. A total of 138 active veterinary drug shops were registered in these two districts.

Data on the total number of animals (ducks, Muscovy ducks, chickens, pigs, geese, bovines, goats) in each commune were converted into animal bodyweight based on 50% of the average weight of slaughtered animals in Mekong region [22]: Duck, chicken (1.6 kg), goat (44.4 kg), pig (78.6 kg), cow (200 kg). The Muscovy duck and goose slaughter weights were estimated in 3.2 kg. We calculated the Spearman’s rank correlation coefficient between the number of veterinary drug shops and animal bodyweight at commune level. Detailed on animal population by species at commune level are provided in Table S2.

The location coordinates of all veterinary drug shops and chicken farms in the two study districts were obtained. These were plotted using Quantum GIS (QGIS), version 2.18.15 (QGIS Development Team) based on DIVA-GIS boundary data (https://www.diva-gis.org). A kernel density algorithm was used to create density heat maps of veterinary drug shop within a radius of 5 kilometers [23]. Likewise, the ratio of veterinary drug shops and person-days per week (the sum of working days of all staff including the shop owner per week) to total tonnes of animal bodyweight per commune was plotted using a kernel density.

Veterinary drug shop owners in Cao Lanh and Thap Muoi district were interviewed using structured questionnaires. Information on demographic characteristics of the shop owners (i.e., age, gender, educational status) and other shop-related variables (district, number of years in business, type/s of customer, opening times, staffing capacity, types of products sold, diagnostic services, loan service of feed, health products and sales by species) were collected. In addition, we interviewed small-scale chicken farmers (raising between 100 and 2000 chickens) that had previously been randomly selected for a longitudinal study [24]. Farmers were asked to list the veterinary drug shops from where they purchased veterinary drugs over their latest flock production cycle. Farmers were asked to list and rank the reasons behind their choice of each drug shop, adding up to 100%. We calculated a standardised score for each reason by multiplying each of these ranks by the share of expenditure on each veterinary drug shop. The distances between veterinary drug shops and chicken farms were determined using the Distance Matrix Tool on QGIS.

Risk factor analyses for the outcome variable ‘proportion of business income consisting of antimicrobial sales (square root transformed) were carried out by linear regression. The variables investigated were: (1) Owner’s gender; (2) Owner’s age (as determined with a cut-off of median value of 40 years old); (3) Qualification of owner (vocational/bachelor or higher); (4) District; (5) Numbers of years in business (log); (6) Staffing capacity (person-days per week) (log); (7) Affiliation to veterinary authority (previous or current); (8) Diagnostic services available (including post-mortem); (9) Loan services available; (10) Kernel density of veterinary drug shop (log). A multivariable model was built using a step-wise forward approach to select the final model. Univariable models were screened, and those with a p < 0.20 were kept as a candidate for multivariable models. All statistical analyses were done using R (http://www.r-project.org).

Our findings suggest that improving the knowledge base of veterinary drug shops owners and their staff on animal diseases and diagnostics may contribute to reducing excessive dispensation of antimicrobials, whilst improving their awareness on the consequences of antimicrobial misuse. This should be coupled with more stringent licencing requirements and training certificates to owners of these shops, as well as any staff operating them.

This work was funded by the Wellcome Trust through an Intermediate Clinical Fellowship awarded to Juan J Carrique-Mas (Grant Reference Number 110085/Z/15/Z).

The authors would like to thank all participants involved in the study, the staff at Sub-Department of Animal Health of Dong Thap Province, District Agricultural Service Center of Cao Lanh and Thap Muoi and the Faculty of Animal Science and Veterinary Medicine (Nong Lam University, HCMC—Gia Lai Campus) for their support. 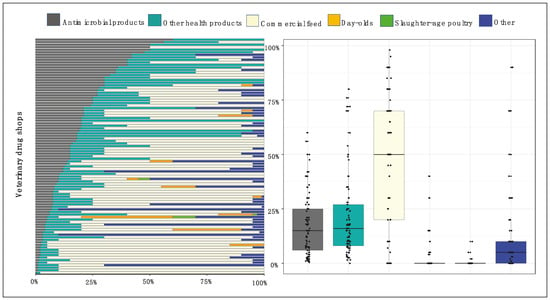 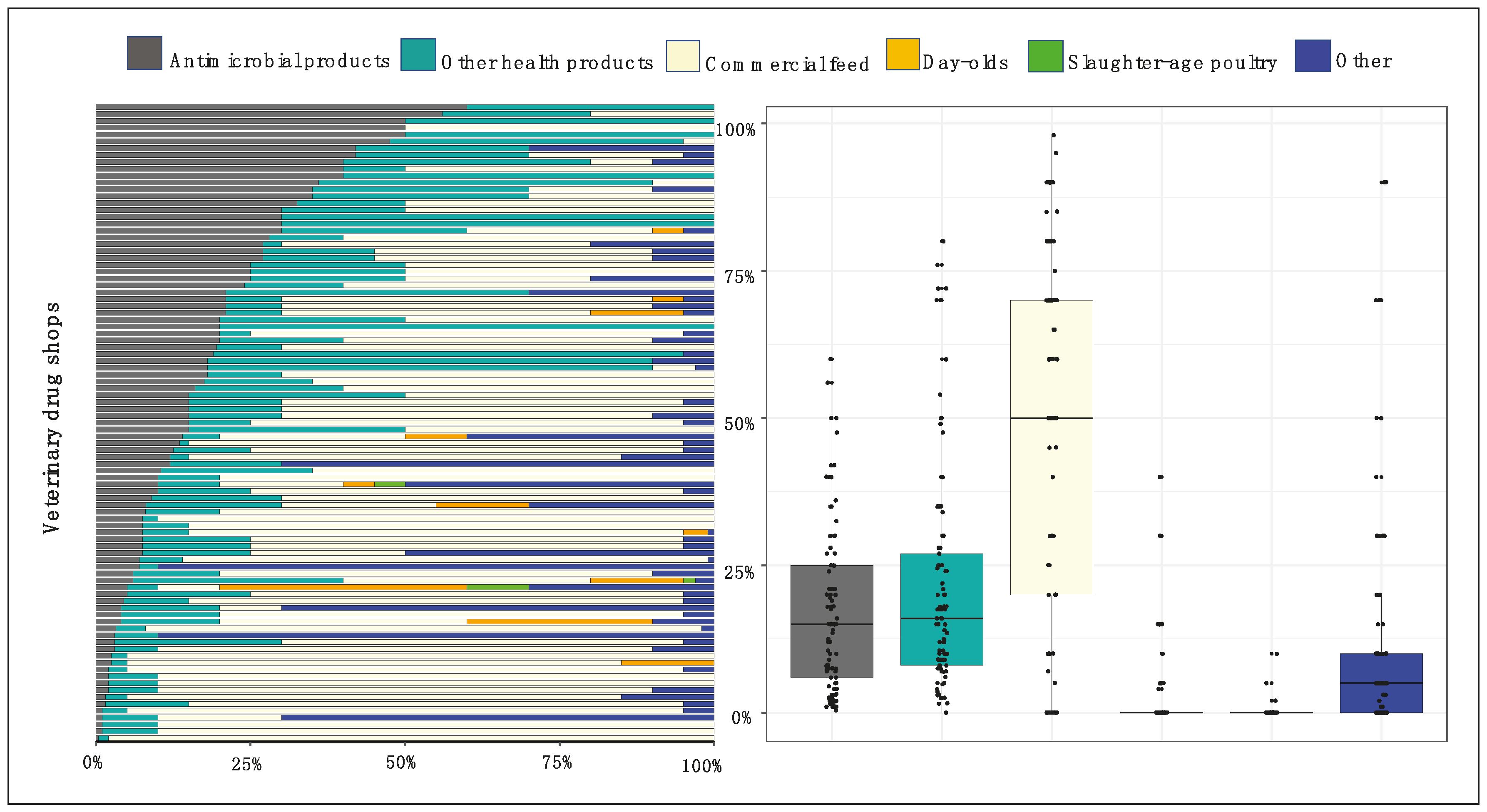 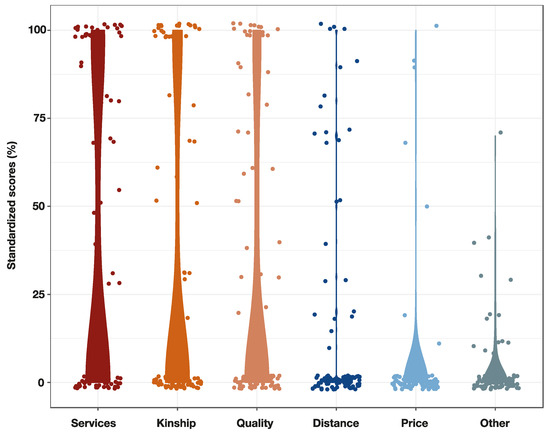 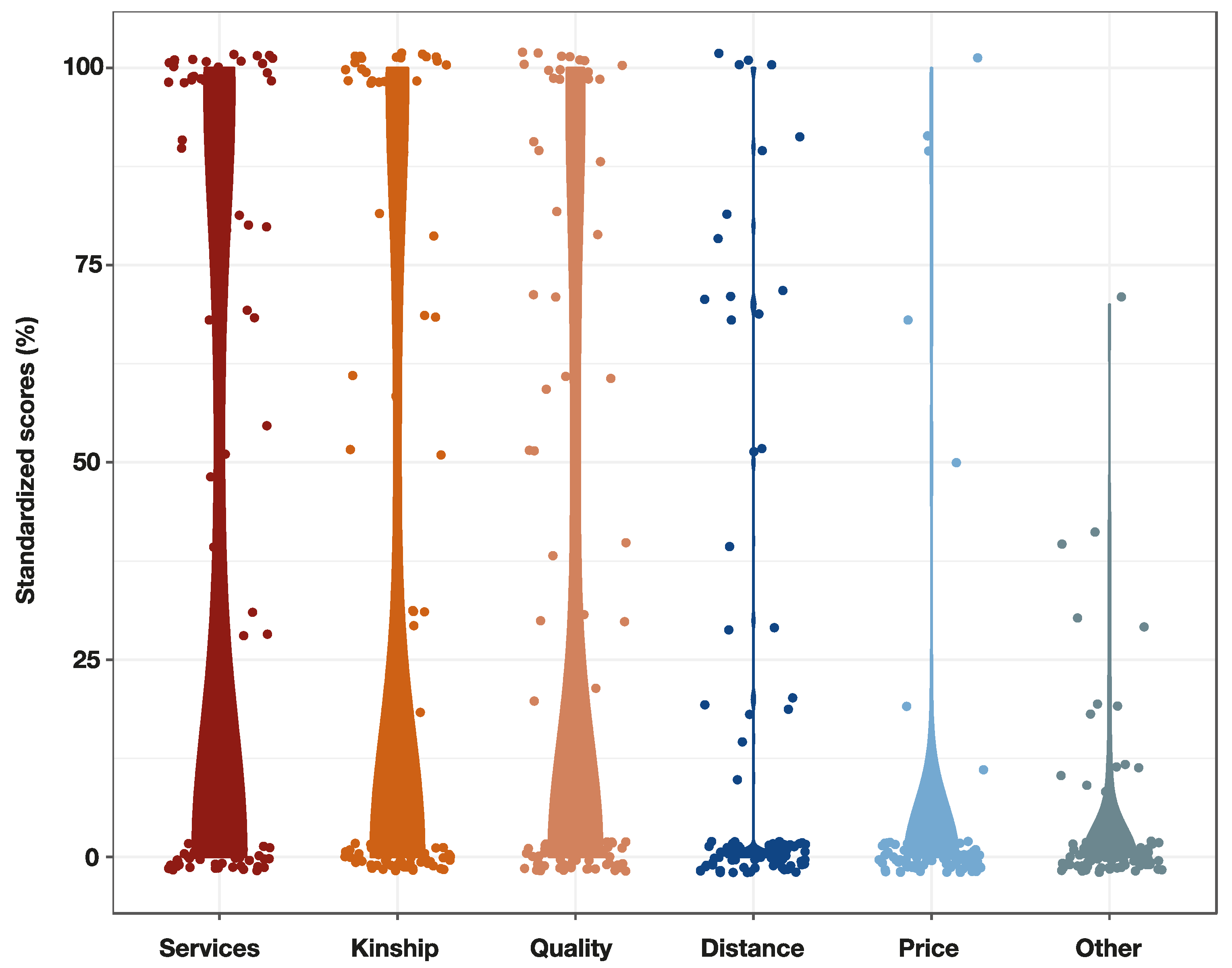