Do Global Regulators Hold the Key to Production of Bacterial Secondary Metabolites?
Next Article in Special Issue

Using Colistin as a Trojan Horse: Inactivation of Gram-Negative Bacteria with Chlorophyllin

The Effect of 2-Thiocyanatopyridine Derivative 11026103 on Burkholderia Cenocepacia: Resistance Mechanisms and Systemic Impact

Bacteria of the Burkholderia cepacia complex (Bcc) are associated with significant decline of lung functions in cystic fibrosis patients. Bcc infections are virtually impossible to eradicate due to their irresponsiveness to antibiotics. The 2-thiocyanatopyridine derivative 11026103 is a novel, synthetic compound active against Burkholderia cenocepacia. To characterize mechanisms of resistance to 11026103, B. cenocepacia was subjected to chemical mutagenesis, followed by whole genome sequencing. Parallel mutations in resistant isolates were localized in a regulatory protein of the efflux system Resistance-Nodulation-Division (RND)-9 (BCAM1948), RNA polymerase sigma factor (BCAL2462) and its cognate putative anti-sigma factor (BCAL2461). Transcriptomic analysis identified positive regulation of a major facilitator superfamily (MFS) efflux system BCAL1510-1512 by BCAL2462. Artificial overexpression of both efflux systems increased resistance to the compound. The effect of 11026103 on B. cenocepacia was analyzed by RNA-Seq and a competitive fitness assay utilizing an essential gene knockdown mutant library. 11026103 exerted a pleiotropic effect on transcription including profound downregulation of cluster of orthologous groups (COG) category “Translation, ribosomal structure, and biogenesis”. The competitive fitness assay identified many genes which modulated susceptibility to 11026103. In summary, 11026103 exerts a pleiotropic cellular response in B. cenocepacia which can be prevented by efflux system-mediated export. View Full-Text
Keywords: Burkholderia cenocepacia; chemical mutagenesis; RNA-Seq; whole-genome sequencing; Tn-Seq; chemical genetics Burkholderia cenocepacia; chemical mutagenesis; RNA-Seq; whole-genome sequencing; Tn-Seq; chemical genetics
►▼ Show Figures 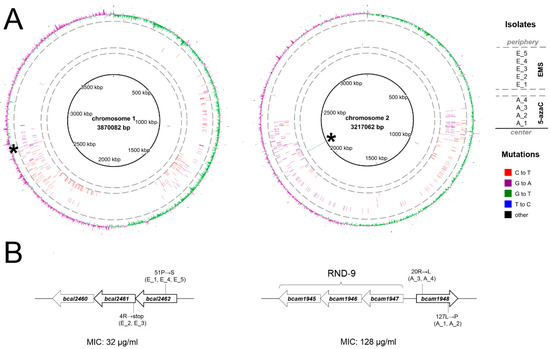