Demographic, Knowledge and Impact Analysis of 57,627 Antibiotic Guardians Who Have Pledged to Contribute to Tackling Antimicrobial Resistance
Next Article in Special Issue

The continued emergence of new antibiotic resistant bacterial strains has resulted in great interest in the development of new antimicrobial treatments. Antimicrobial peptides (AMPs) are one of many potential classes of molecules to help meet this emerging need. AMPs are naturally derived sequences, which act as part of the innate immune system of organisms ranging from insects through humans. We investigated the antimicrobial peptide AP3, which is originally isolated from the winter flounder Pleuronectes americanus. This peptide is of specific interest because it does not exhibit the canonical facially amphiphilic orientation of side chains when in a helical orientation. Different analogs of AP3 were synthesized in which length, charge identity, and Trp position were varied to investigate the sequence-structure and activity relationship. We performed biophysical and microbiological characterization using fluorescence spectroscopy, CD spectroscopy, vesicle leakage assays, bacterial membrane permeabilization assays, and minimal inhibitory concentration (MIC) assays. Fluorescence spectroscopy showed that the peptides bind to lipid bilayers to similar extents, while CD spectra show the peptides adopt helical conformations. All five peptides tested in this study exhibited binding to model lipid membranes, while the truncated peptides showed no measurable antimicrobial activity. The most active peptide proved to be the parent peptide AP3 with the highest degree of leakage and bacterial membrane permeabilization. Moreover, it was found that the ability to permeabilize model and bacterial membranes correlated most closely with the ability to predict antimicrobial activity. View Full-Text
Keywords: antimicrobial peptides; pore-forming peptides; fluorescence spectroscopy; membrane permeabilization antimicrobial peptides; pore-forming peptides; fluorescence spectroscopy; membrane permeabilization
►▼ Show Figures 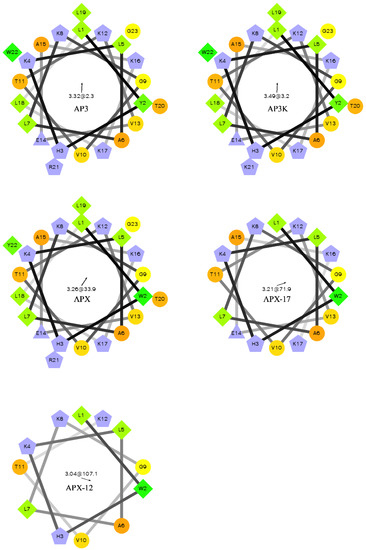