Hiding in Plain Sight: Characterization of Aeromonas Species Isolated from a Recreational Estuary Reveals the Carriage and Putative Dissemination of Resistance Genes
Previous Article in Journal

:
Animal and food sources are seen as a potential transmission pathway of multi-drug resistance (MDR) micro-organisms to humans. Escherichia. coli is frequently used as an indicator of fecal contamination in the food industry and known as a reservoir of antimicrobial resistance genes (ARGs). Microbial contamination as a major outcome for the poultry and egg industry and is a serious public health problem. In the present study we performed the quantification of β-glucoronidase positive E. coli in 60 fecal samples of breeding and laying hens collected in Portugal in 2019. Phylogenetic and pathotypic characterization, antimicrobial susceptibility, and detection of resistant extended-spectrum β-lactamase (ESBL) genes were assessed. The phylogenetic and pathogenic characterization and detection of ESBL genes were assessed by real-time PCR and antimicrobial susceptibility was evaluated using the disk diffusion method. Overall, E. coli quantification was 6.03 log CFU/g in breeding hens and 6.02 log CFU/g in laying hens. The most frequent phylogroups were B1. None of the isolates was classified as diarrheagenic E. coli (DEC). In total, 57% of the isolates showed MDR and 3.8% were positive for ESBL. Our study highlights that consumers may be exposed to MDR E. coli, presenting a major hazard to food safety and a risk to public health.
Keywords:
Escherichia coli; breeding hens; egg laying hens; fecal samples; phylogroup; MDR; ESBL

The microbiological load of E. coli in the 60 fecal samples was calculated in TBX, TBX supplemented with ampicillin (TBXamp) or with enrofloxacin (TBXenro) and the average of the results obtained were 6.03 log CFU/g in TBX, 4.77 log CFU/g in TBXamp, and 3.49 log CFU/g in TBXenro. Results of E. coli enumeration in the three different agar and type of hens are in shown in Table 1.
From the analysis of Table 1, it is possible to verify that there are only significant differences (p < 0.05) between laying hens and breeding hens feces samples in the Log TBXenro parameter, noting that this is significantly higher in the breeding hens.

2.2. Determination of the E. coli Phylogenetic and Patotypes Groups

Seventy nine isolates were selected for further studies as shown in Table 2.
The most predominant phylogroup was B1 (75%) followed by phylogroup A (19%) (Table 3).
Phylogroup B1 was the most predominant with more than 80% of the isolates from breeding hens and 60.7% in egg laying hens, followed by phylogroup A. Only isolates from egg laying hens were identified as phylogroup D (3.6%) or as not belonging to any phylogroup (3.6%), requiring the performance of multilocus sequence typing (MLST) that was not made. Isolates belonging to phylogroup B2, C, F, or clade I were not detected.
Concerning pathotypes, none of the isolates studied was classified as DEC.

An overview of the antimicrobial susceptibility of the 79 E. coli isolates from breeding and egg laying hens is given in Table 4.
AMP was the antibiotic to which the largest number of isolates showed resistance, with 81% (64 isolates) of the resistant isolates; in decreasing order of resistance of the isolates: NAL with 65.8% (52 isolates), TET with 62.0% (49 isolates), CIP with 59.5% (47 isolates), SULF with 44.3% (35 isolates), TMP with 31.6% (25 isolates), CHL with 11.4% (9 isolates) and AZM, and CAZ and GRM with 3.8% (3 isolates). As for CTX and MEM, none of the 79 isolates from hens’ feces showed resistance, making them the only two antibiotics to which the 79 isolates were 100% sensitive.
Since the 79 hens’ feces isolates were derived from two distinct functions: breeders and layers, we decided to verify the distribution of susceptibility to the different antimicrobials as a function of the two hens’ functions (Figure 1). Excluding that for Azithromycin, a greater percentage of resistant isolates is observed in breeding hens.

From the isolates that showed resistance to CAZ, we verified which resistance genes were present for ESBL. In tree isolates (rate of 3.8% in analyzed samples) genes blaTem and blaCTX-M were detected. More information about the three isolates can be found in Table 6.

This research work complements and updates previous studies carried out in Portugal on MDR E. coli from food products of animal origin.
In the present study, we found E. coli isolates belonging mostly to phylogroup B1 and A, which are reported as commensals, but also to phylogroup E, classified as extraintestinal pathogenic strains. None of the isolates studied was classified as DEC; however, as the isolation agar used was TBX only β-glucoronidase positive E. coli were selected. In total, 81% of isolates tested were resistant to at least one antimicrobial and a greater percentage of resistant isolates was observed in breeding hens; 57% of total isolates were MDR and again, a greater percentage of MDR isolates was observed in breeding hens. Three resistant isolates were considered as potential ESBL producers and once again, two out of three were from breeding hens.
The work shows that E. coli can exhibit multiple resistance to various antimicrobials, posing a major risk to food safety and public health.
This study also reinforces previous reports that ESBL-producing E. coli has become one of the leading indicators for estimating MDR burden in animals and other sectors from a unique health perspective.

Sixty fecal samples from breeding (n = 31) and egg laying (n = 29) hens were collected from the Centro and Lisboa and Vale do Tejo regions, between March and May 2019 from 36 farms, by Portuguese Food Authorities under the control programs for Salmonella. Laboratory procedures for the isolation and identification of E. coli followed the protocols defined by ISO 16649-2:2001 [79]. Briefly, 25 g of each fecal sample was mixed with 225 mL of peptone-buffered water (BPW) (Bio-Rad, Hercules, CA, USA). Decimal dilutions were prepared up to 10−5 with Tryptone Salt Broth (Bio-Rad) and 1 mL of the 10−4 and 10−5 dilutions were plated in Tryptone Bile X-Glucuronide (TBX) agar (Bio-Rad), 10−3 to 10−5 dilutions were plated in TBX agar supplemented with 100 μg/mL of ampicillin (TBXamp) (Sigma-Aldrich, St. Louis, MO, USA) and 10−2 to 10−5 dilutions were plated in TBX agar supplemented with 10 μg/mL of enrofloxacin (TBXenro) (Sigma-Aldrich). Ampicillin was chosen as a selective agent because it has a broad spectrum of action, particularly against Gram-negative bacteria, and is rapidly absorbed and eliminated in poultry. Enrofloxacin is applied in birds for the treatment of infections of the digestive and respiratory tract, belongs to the group of fluoroquinolones, is bactericidal, and is used against Gram-negative bacteria. Plates were incubated at 44 °C for 18 to 24 h. After the incubation period, all plates were analyzed, and the number of colonies was counted for each dilution applied. A colony from TBXamp and from TBXenro was then sub-cultured onto a slant tube containing Heart Infusion Agar (HIA) (Biogerm, Moreira, Portugal), placed again at 35 °C for 18 ± 2 h. Subsequently, these tubes were stored at 4 °C agar.
Confirmation of characteristic colonies was carried out by lactose fermentation and indol production: from the HIA a tube containing phenol red lactose broth (Sigma-Aldrich, Missouri, EUA) and a tube containing tryptophan broth (Biogerm) were inoculated and incubated at 35–37 °C for 24 h. The positive test consists of a color change from red to yellow, indicating a pH change to acidic in the lactose broth and the formation of a ring after the addition of Kovacs reagent (Sigma-Aldrich) in tryptophan broth.

Descriptive statistics (mean, standard deviation (SD)) were generated for all of the variables in the dataset. Analysis of variance was performed on microbiological load of E. coli in TBX, TBX supplemented with ampicillin (TBXamp), or with enrofloxacin (TBXenro), for breeding hens and egg laying hens’ feces’ samples data, using the IBM SPSS Statistics 23.0 for Windows [88]. The analysis was carried out using a t-test of independent samples with a variable grouping of sample sources (breeding hens and egg laying hens). All statements of significance were based on testing at the p < 0.05 level.

The authors would like to thank CECA-ICETA UIDB/00211/2020 for their support. The authors are deeply grateful to Stefano Morabito from The European Union Reference Laboratory (EURL) for Escherichia coli and to Jorge Blanco from Laboratorio de Referencia de E. coli (LREC), Facultad de Veterinaria de Lugo, Spain for providing the strains that were used as controls in each PCR reaction batch. The authors would also like to thank Bio-Rad Laboratories for their support in providing some of the antibiotics used in this study. 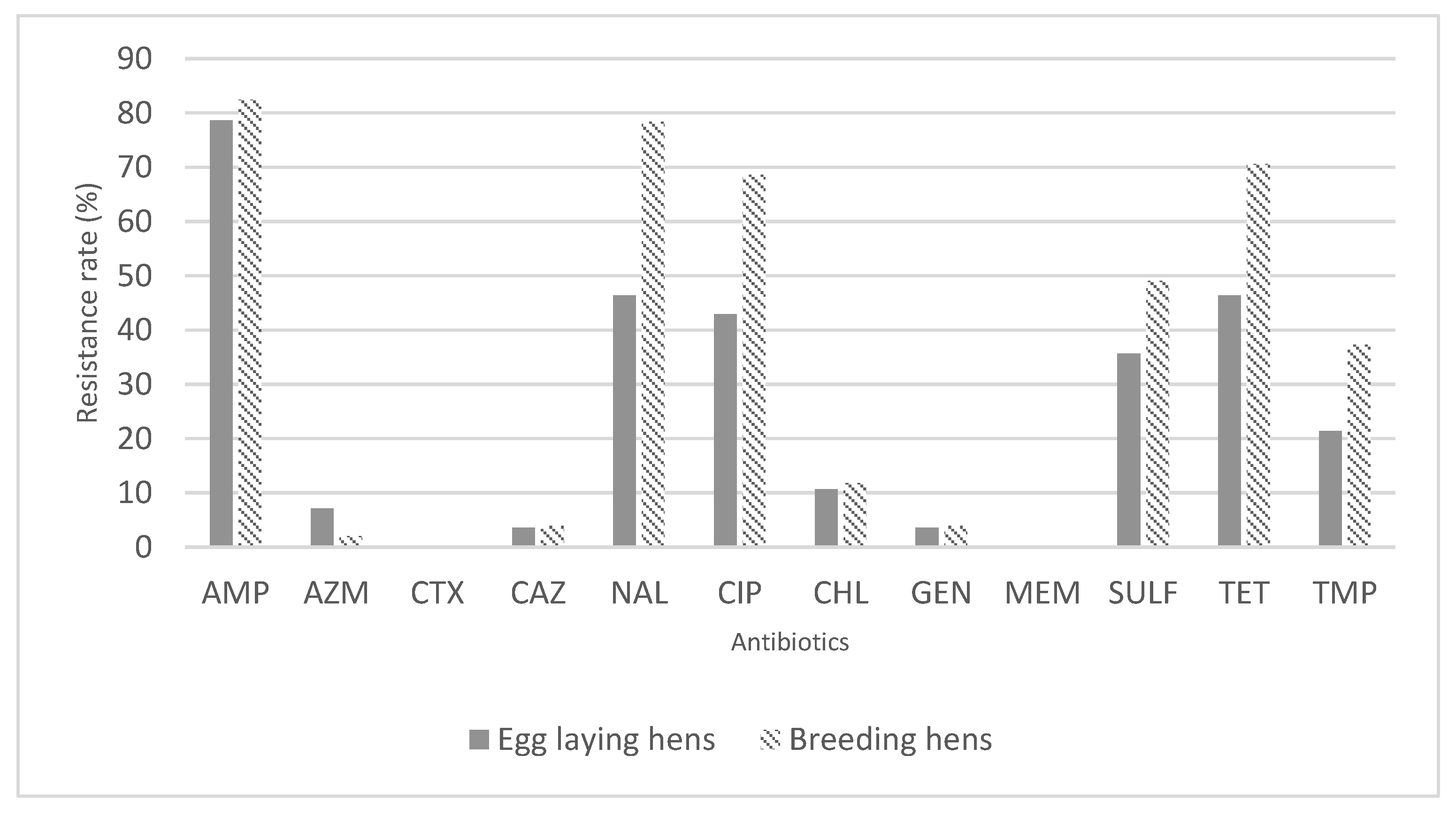