Daptomycin versus Glycopeptides for the Treatment of Enterococcus faecium Bacteraemia: A Cohort Study
Previous Article in Special Issue

:
Honeybees are one of the most marvelous and economically beneficial insects. As pollinators, they play a vital role in every aspect of the ecosystem. Beehive products have been used for thousands of years in many cultures for the treatment of various diseases. Their healing properties have been documented in many religious texts like the Noble Quran and the Holy Bible. Honey, bee venom, propolis, pollen and royal jelly all demonstrated a richness in their bioactive compounds which make them effective against a variety of bacterial strains. Furthermore, many studies showed that honey and bee venom work as powerful antibacterial agents against a wide range of bacteria including life-threatening bacteria. Several reports documented the biological activities of honeybee products but none of them emphasized on the antibacterial activity of all beehive products. Therefore, this review aims to highlight the antibacterial activity of honey, bee venom, propolis, pollen and royal jelly, that are produced by honeybees.
Keywords:
antibacterial activity; honeybee products; honey; bee venom; propolis; royal jelly; pollen

Honeybees, also known as the ‘’Golden insect‘’, belong to the genus Apis, which is the Latin word for ‘’bee’’. These marvelous social insects live in a well-organized community and belong to the order Hymenoptera and to the family Apidae [1]. Honeybees can be found all around the world and are used for their vital role as pollinators in agriculture, but the main used species for crop pollination is Apis mellifera [2]. Since ancient times, honeybee products have been used for medicinal purposes. They have been also cited in many religious books [3]. Egyptians, Romans, Chinese and Persians have all documented for thousands of years the nutritional and medicinal values of bee products [4]. Apitherapy is a branch of unconventional medicine that relies on the usage of bee products which consist of honey, pollen, propolis, royal jelly and bee venom (BV). Besides having high nutritional importance and health benefits, honey showed antifungal, antiviral, antiseptic, anticancer, anti-diabetic, anti-inflammatory and cardio protective activities [5]. As for the BV, despite its possible adverse effects like the allergic reactions that might occur after the bee sting, one cannot disregard its various therapeutic effects. BV exerts anticancer, antiviral, antifungal and antibacterial effects, it is also used for the treatment of many neurodegenerative diseases [6,7,8,9,10]. Regarding propolis, it has the capacity to fight against cancer and many microorganisms [4,11,12]. Moreover, pollen possesses antioxidant, anticoagulant and anti-inflammatory properties [13,14,15]. Also, royal jelly exhibits several interesting biological activities including antioxidant [16], anti-aging [17], antitumor [18,19] anti-inflammatory, antimicrobial [20], and neurotrophic activities [21]. Hence, this review aims to highlight one of the most important and commonly shared biological activity of all of the above-mentioned beehive products, which is the antibacterial activity (Figure 1).

Pollen of various flowers is collected by field bees and agglutinated by bees enzymes secreted by the salivary glands and by the nectar. Then, the pollen is placed in corbiculae situated on the tibia of the bees hind legs to form the pollen loads, commonly known as the bee pollen, in the form of granules [139]. Pollen is the raw material used by bees to produce bee bread, the basis hives food [140]. Pollen stored in honeycomb cells is covered with a thin layer of honey and wax. This results in the formation of bee bread which undergoes anaerobic fermentation and is preserved by the lactic acid which formed [141]. In comparison to honey, small amounts of bee pollen are stocked in the hives and are used during forage absence [142]. Many studies have shown that bees collect pollen from very few plant species. Bee pollen contains about 250 substances including amino acids, lipids, vitamins, macro- and micronutrients, flavonoid, and organic carotenoid pigments which makes it an ideal food [143]. Its composition varies depending on the biogeographic origin, ecological habitat, season, weather conditions during collection, as well as on the bee race and even beekeeping management [144]. Phenolic compounds are responsible of the bee pollen bioactivity [141]. For centuries, bee pollen has been used for its medicinal and nutritional properties. Likewise, many ancient philosophers highly valued pollen as a part of their healthy diet [15].
Bee pollen is often collected by using a pollen trap at the entrance or in the hives. Sometimes, it is directly collected from the bee hind legs [145]. Water, ethanol and methanol are the most commonly used solvents for the extraction of bee pollen. Studies showed that the highest content of bioactive compounds is present in ethanol or water extracts in comparison to natural bee pollen [146]. The antibacterial activity of bee pollen was investigated and results showed a positive effect on both Gram-positive and Gram-negative bacteria with a higher sensitivity in Gram positive bacteria. A study on the antibacterial activity of Moroccan bee pollen demonstrated an inhibition effect against S. aureus, Streptococcus spp, E. coli and P. aeruginosa with a higher sensitivity in Gram-positive bacteria [145]. Similarly, Bacillus cereus, S. aureus, S. typhi and E. coli were sensitive to Portugal bee pollen [147]. Applying a concentration of 0.02% to 2.5% (vol/vol) of bee pollen extract to B. cereus, B. subtilis, E. coli, Salmonella typhimurium, S. aureus, Yersinia enterocolitica, E. faecalis and Listeria monocytogenes did not exert any antimicrobial effect on these bacterial strains indicating that the activity is concentration dependent [148]. The antimicrobial activity of bee pollen was also assessed on Clostridia class organisms, i.e., Clostridium butyricum, Clostridium hystoliticum, Clostridium intestinale, Clostridium perfringens and Clostridium ramosum. Results showed an antibacterial activity against all of the above mentioned strains of clostridia with that against C. butyricum and C. perfringens being the most potent one [149]. The antimicrobial activity of a Chilean bee pollen extract was investigated against human pathogenic bacteria E. coli, P. aeruginosa, S. aureus and S. pyogenes showed a high sensitivity to the bioactivity of bee pollen in opposition to E. coli and P. aeruginosa [150].
Furthermore, ethanol and methanol extracts of Slovakian bee pollen were tested for their antibacterial property against L. monocytogenes, P. aeruginosa, S. aureus, S. enterica and E. coli. Results showed that S. aureus was the most sensitive bacteria to the ethanolic bee pollen extract while S. enterica was the most sensitive one to the methanolic extract [139]. E. coli, S. enteritidis, S. aureus, L. monocytogenes were tested with ethanol pollen extract. It was found that S. aureus and L. monocytogenes growth was inhibited while this was not the case for both E. coli and Salmonella enteritidis which both showed resistance to ethanol extracts of pollen [151]. In some studies, the nature of the solvent used might affect the antibacterial activity of bee pollen where the same sample can be more effective against Gram-negative bacteria than Gram-positive bacteria. Slovenian bee pollen ethanol extract showed a higher antibacterial activity against Gram-negative bacteria (E. coli and Campylobacter jejuni) than Gram-positive bacteria (L. monocytogenes) [152]. The same result was observed for honeybee pollen collected from a region of Chile who revealed antibacterial activity against S. pyogenes only and showed no activity against E. coli, S. aureus and P. aeruginosa [14]. Moreover, E. coli was the most sensitive strain to 70% ethanol bee pollen extract but resistant to 96% ethanol extract which confirms the fact that bacterial strains are specific to the solvent and its concentration [153].
The antibacterial mechanism of bee pollen remains unclear until now. Studies suggest that the antibacterial activity of bee pollen is associated with glucose oxidase; an enzyme produced by honeybees and added to pollen during the process of granules formation [154]. Additionally, this activity might be correlated with the total phenolic content and phenol composition. Phenolic acids and flavonoids present in pollen can act against bacterial cells by degrading the cytoplasmic membrane which leads to loss of potassium ions and initiation of the cell’s autolysis [148]. Other researchers argue that the composition of the pollen is associated with its antibacterial activity. This is most likely due to the fact that many bee pollen extracts with the lowest total phenol concentrations were the most effective against microorganisms [155,156]. In addition to the presence of many bioactive compounds such as fatty acids, EXLVs and presumably microbial metabolites known for their antibacterial activity in bee pollen. Surprisingly, bee pollen exerts an inhibition effect against many pathogenic bacterial strains but does not act against lactic acid starter cultures. Hence, bee pollen could serve as a potential candidate that is more suitable than antibiotics which kill both pathogens and probiotics [157].

The use of beehive products for medicinal purposes has long been exploited by mankind. Here, the antibacterial properties of honey, bee venom, propolis, pollen and royal jelly have been discussed. Each of these products is characterized by the presence of bioactive compounds which makes the formers powerful inhibitors of pathogenic bacterial strains. Table 1 summarizes all the bacterial strains susceptible to honeybee products with the MIC and MBC determined. Many clinical trials are being conducted to test the safety and effectiveness of beehive products on infected wounds as well as on various bacterial diseases such as gastroenteritis. Studies showed that bee venom exhibits both antibacterial and anti-inflammatory activity and can be used in acne treatment, and propolis was demonstrated to be efficient in both skin and dental treatment. Finally, although bee products are considered as promising and potent antibacterial candidates, future work should emphasize on their possible adverse effects when applied or administrated directly to the human body.

This research was funded by Lebanese University. 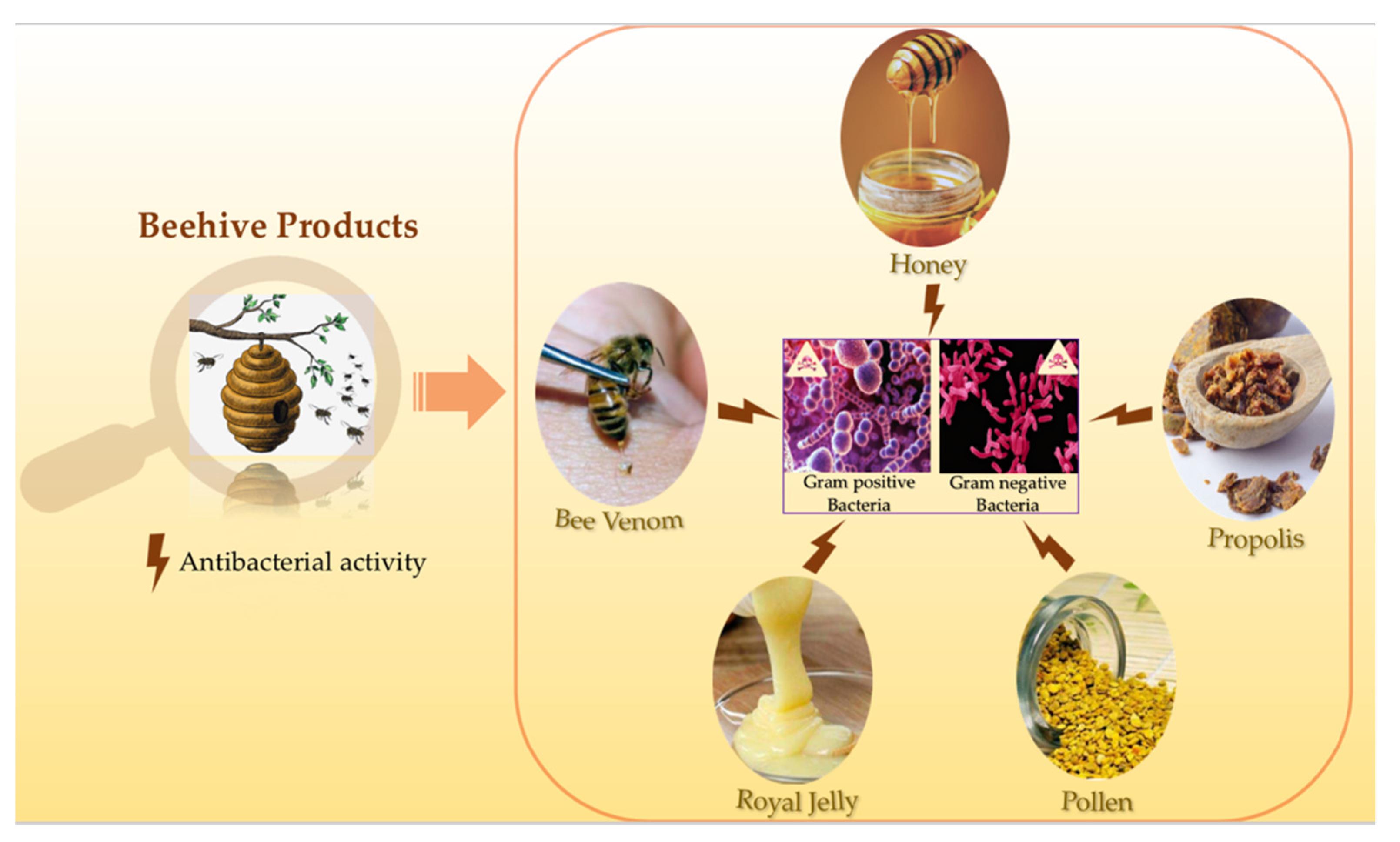