Infection Control in the Era of COVID-19: A Narrative Review
Next Article in Special Issue

Therapeutic Potential of Sitafloxacin as a New Drug Candidate for Helicobacter Eradication in Korea: An In Vitro Culture-Based Study
Previous Article in Special Issue

Background: Linezolid, bedaquiline, and newer fluoroquinolones are currently placed as priority Group A drugs for the treatment of drug-resistant tuberculosis. The number of reported linezolid-resistant clinical strains is still low, and the correlation of molecular determinants with phenotype is not perfect. Methods: We determined the linezolid MICs for clinical isolates from the Moscow region and identified mutations in rplC and rrl genes. Results: All 16 linezolid-resistant isolates had previously reported mutations in the rplC or rrl loci, and 13 of them bore a RplC C154R substitution. Detection of this substitution in a heteroresistant state was not successful, probably, due to the more stable DNA secondary structure of the mutated fragment, which precludes its amplification in mixes with the wild-type DNA. Strains with an rplC mutation had higher linezolid MIC compared to isolates with rrl mutations. Conclusions: Linezolid resistance mostly emerged during treatment with the latest regimen. Three primary cases with linezolid resistance question the possible transmission of totally drug-resistant tuberculosis in the Moscow region, which demands further investigation. View Full-Text
Keywords: tuberculosis; drug-resistance; linezolid tuberculosis; drug-resistance; linezolid
►▼ Show Figures 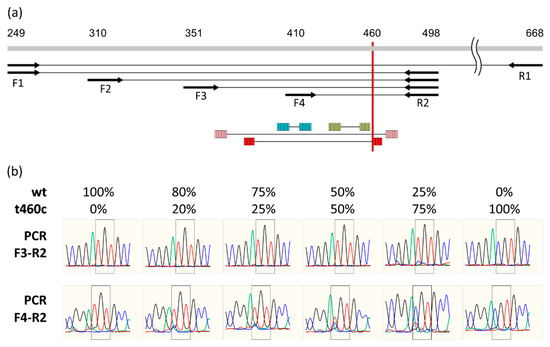