Cardiovascular diseases, including atherosclerosis, now account for more deaths in the Western world than from any other cause. Atherosclerosis has a chronic inflammatory component involving Th1 pro-inflammatory cytokines such as IFN-γ, which is known to induce endothelial cell inflammatory responses. On the other hand CNP, which acts via its receptors to elevate intracellular cGMP, is produced by endothelium and endocardium and is upregulated in atherosclerosis. It is believed to be protective, however its role in vascular inflammation is not well understood. The aim of this study was to investigate the effects of CNP on human endothelial cell inflammatory responses following IFN-γ stimulation. Human umbilical vein endothelial cells were treated with either IFN-γ (10 ng/mL) or CNP (100 nm), or both in combination, followed by analysis by flow cytometry for expression of MHC class I and ICAM-1. IFN-γ significantly increased expression of both molecules, which was significantly inhibited by CNP or the cGMP donor 8-Bromoguanosine 3’,5’-cyclic monophosphate (1 µm). CNP also reduced IFN-γ mediated kynurenine generation by the IFN-γ regulated enzyme indoleamine-2,3-deoxygenase (IDO). We conclude that CNP downmodulates IFN-γ induced pro-inflammatory gene expression in human endothelial cells via a cGMP-mediated pathway. Thus, CNP may have a protective role in vascular inflammation and novel therapeutic strategies for CVD based on upregulation of endothelial CNP expression could reduce chronic EC inflammation. View Full-Text
Keywords: C-type natriuretic peptide; endothelium; inflammation; cardiovascular; interferon gamma; indoleamine-2,3-dioxygenase C-type natriuretic peptide; endothelium; inflammation; cardiovascular; interferon gamma; indoleamine-2,3-dioxygenase
►▼ Show Figures 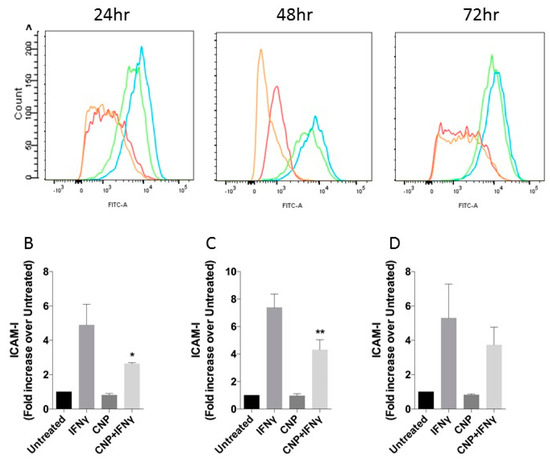