The mechanosensitive channel of large conductance, MscL, has been proposed as a triggered nanovalve to be used in drug release and other nanodevices. It is a small homopentameric bacterial protein that has the largest gated pore known: greater than 30 Å. Large molecules, even small proteins can be released through MscL. Although MscL normally gates in response to membrane tension, early studies found that hydrophilic or charged residue substitutions near the constriction of the channel leads to pore opening. Researchers have successfully changed the modality of MscL to open to stimuli such as light by chemically modifying a single residue, G22, within the MscL pore. Here, by utilizing in vivo, liposome efflux, and patch clamp assays we compared modification of G22 with that of another neighboring residue, G26, and demonstrate that modifying G26 may be a better choice for triggered nanovalves used for triggered vesicular release of compounds. View Full-Text
Keywords: drug-delivery; nanovalve; osmoregulation; biosensor; hydrophobic gating; mechanosensor drug-delivery; nanovalve; osmoregulation; biosensor; hydrophobic gating; mechanosensor
►▼ Show Figures 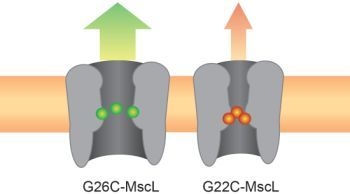