Recent Progress in Wearable Biosensors: From Healthcare Monitoring to Sports Analytics
Next Article in Special Issue

Half of the global agricultural fresh produce is lost, mainly because of rots that are caused by various pathogenic fungi. In this study, a complementary metal-oxide-semiconductor (CMOS)-based biosensor was developed, which integrates specific DNA strands that allow the detection of enoyl-CoA-hydratase/isomerase, which is a quiescent marker of Colletotrichum gloeosporioides fungi. The developed biosensor mechanism is based on the metal-enhanced fluorescence (MEF) phenomenon, which is amplified by depositing silver onto a glass surface. A surface DNA strand is then immobilized on the surface, and in the presence of the target mRNA within the sample, the reporter DNA strand that is linked to horseradish peroxidase (HRP) enzyme will also bind to it. The light signal that is later produced from the HRP enzyme and its substrate is enhanced and detected by the coupled CMOS sensor. Several parameters that affect the silver-deposition procedure were examined, including silver solution temperature and volume, heating mode, and the tank material. Moreover, the effect of blocking treatment (skim milk or bovine serum albumin (BSA)) on the silver-layer stability and nonspecific DNA absorption was tested. Most importantly, the effect of the deposition reaction duration on the silver-layer formation and the MEF amplification was also investigated. In the study findings a preferred silver-deposition reaction duration was identified as 5–8 min, which increased the deposition of silver on the glass surface up to 13-times, and also resulted in the amplification of the MEF phenomenon with a maximum light signal of 50 relative light units (RLU). It was found that MEF can be amplified by a customized silver-deposition procedure that results in increased detection sensitivity. The implementation of the improved conditions increased the biosensor sensitivity to 3.3 nM (4500 RLU) with a higher detected light signal as compared to the initial protocol (400 RLU). Moreover, the light signal was amplified 18.75-, 11.11-, 5.5-, 11.25-, and 3.75-times in the improved protocol for all the tested concentrations of the target DNA strand of 1000, 100, 10, 3.3, and 2 nM, respectively. The developed biosensor system may allow the detection of the pathogenic fungus in postharvest produce and determine its pathogenicity state. View Full-Text
Keywords: pathogenic fungus; Colletotrichum gloeosporioides; metal-enhanced fluorescence; silver deposition; CMOS biosensor; postharvest system pathogenic fungus; Colletotrichum gloeosporioides; metal-enhanced fluorescence; silver deposition; CMOS biosensor; postharvest system
►▼ Show Figures 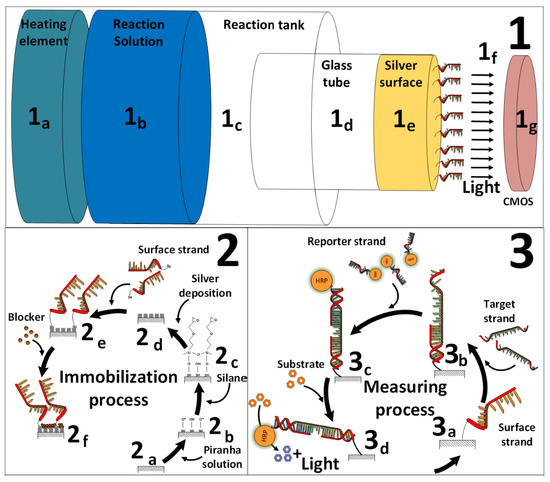 
Harpaz, Dorin; Alkan, Noam; Eltzov, Evgeni. 2020. "The Incorporation of Amplified Metal-Enhanced Fluorescence in a CMOS-Based Biosensor Increased the Detection Sensitivity of a DNA Marker of the Pathogenic Fungus Colletotrichum gloeosporioides" Biosensors 10, no. 12: 204. https://doi.org/10.3390/bios10120204