Citral is an active compound naturally found in lemongrass, lemon, and lime. Although this pale-yellow liquid confers low water solubility, the compound has been reported to possess good therapeutic features including antiproliferative and anticancer modalities. The self nano-emulsifying drug delivery system (SNEDDS) is a type of liquid-lipid nanocarrier that is suitable for the loading of insolubilized oil-based compound such as Citral. This study reports the design and optimization of a SNEDDS formulation, synthesis and characterization as well as loading with Citral (CIT-SNEDDS). Further assessment of theantiproliferative effects of CIT-SNEDDS towards colorectal cancer cells was also conducted. SNEDDS composed of coconut oil, dimethyl sulfoxide (DMSO) and Tween 80. CIT-SNEDDS was prepared via gentle agitation of SNEDDS with 0.5% Citral for 72 h at room temperature. Physicochemical characterization was performed using several physicochemical analyses. The average particle size of CIT-SNEDDS was16.86 ± 0.15 nm, zeta potential of 0.58 ± 0.19 mV, and polydispersity index (PDI) of 0.23 ± 0.01. In vitro drug release of Citral from CIT-SNEDDS was 79.25% of release, and for Citral the release percentage was 93.56% over 72 h. The 3-(4,5-dimethylthiazol-2-yl)-2,5-diphenyltetrazolium bromide (MTT) assay was done to determine the cytotoxicity effect of CIT-SNEDDS in human colorectal cancer cell lines HT29 and SW620. The half maximal inhibitory concentrations (IC50) for 72 hof CIT-SNEDDS and Citral on SW620 were 16.50 ± 0.87 µg/mL and 22.50 ± 2.50 µg/mL, respectively. The IC50 values of CIT-SNEDDS and Citral after 72 h of treatment on HT29 were 34.10 ± 0.30 µg/mL and 21.77 ± 0.23 µg/mL, respectively. This study strongly suggests that CIT-SNEDDS has permitted the sustained release of Citral and that CIT-SNEDDS constitutes a potential soluble drug nanocarrier that is effective against colorectal cancer cells. View Full-Text
Keywords: citral; self nano-emulsifying drug delivery system; colorectal cancer citral; self nano-emulsifying drug delivery system; colorectal cancer
►▼ Show Figures 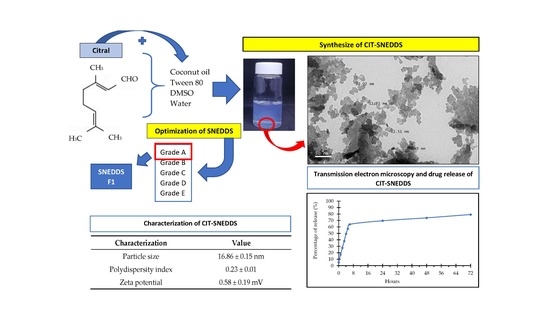