All commercially available reagents were purchased from Aldrich (Milan, Italy) and Alfa Aesar (Karlsruhe, Germany), with exception of tri-tert-butyl-2,2′,2″-(1,4,7,10-tetraazacyclododecane-1,4,7-triyl)triacetate (DO3AtBu), which is a product of CheMatech (Dijon, France). Reagents were used without purification unless otherwise mentioned. Gold and gadolinium standard solutions for ICP–OES analysis were obtained from Sigma–Aldrich (Milan, Italy). Solvents were obtained from Aldrich and VWR, deuterated solvents from Cambridge Isotope Laboratories and Aldrich. Dry solvents were obtained from Aldrich and Alfa Aesar. Chlorinated solvents were kept over K2CO3 with occasional shaking for at least 24 h prior to use. All other solvents were reagent grade and used as received. Purifications by flash chromatography were performed on Merck silica gel 60F-254 (230–400 mesh). Routine nuclear magnetic resonance analyses were performed on a Varian 500 spectrometer operating at 500 MHz for 1H, 470 MHz for 19F and 125 MHz for 13C.

2.5. Determination of the Au/Gd Ratio

Total Au and Gd concentrations in the samples, solubilized with 1 mL of aqua regia (mixture HCl:HNO3 of 3:1) and diluted to 10 mL with MilliQ water, were quantified by means of inductively coupled plasma-optical emission spectrometry (ICP-OES) using an Optima 8000 instrument (PerkinElmer; Waltham, MA, USA) equipped with an S10 integrated autosampler (PerkinElmer; Waltham, MA, USA). The measurements were conducted using a calibration curve obtained by dilution of gold and gadolinium standard solutions for ICP–OES. The limit of detection in the obtained solutions at the operative wavelengths (Au 267.595 nm and Gd 376.839 nm) was 0.02 mg L−1 for both Au and Gd. The precision of the measurements expressed as repeatability (as RSD %) for the analysis was always less than 5%.

2.7. Determination of T1 and T2 Values with the 7 T Preclinical Scanner

Magnetic resonance imaging (MRI) and spectroscopy (MRS) experiments were performed by a horizontal-bore preclinical scanner (BioSpec 70/20 USR, Bruker, Ettlingen, Germany). The system has a magnetic field strength of 7 T and a 20 cm bore diameter. The scanner is equipped with an actively shielded gradient system with integrated shims set up to 2nd order. The maximum gradient amplitude is 440 mT/m. Acquisitions were carried out using a transceiver double tunable 1H/19F linear birdcage RF coil having a diameter of 72 mm. All measurements were done at room temperature. Test tubes were placed at the gradient isocenter and the magnetic field homogeneity within the field of view (FOV) was guaranteed by a 1st order shimming procedure.
1H relaxometry was performed on test tubes containing solutions of functionalized nanoparticles with concentrations of 40; 20; 10 mg/mL. Estimation of T1 and T2 relaxation times was obtained by means of a set of rapid acquisition with relaxation enhancement (RARE) sequences varying repetition time (TR) and echo time (TE), respectively, see SI for further details. For each sample 1H MRI were obtained by RARE sequences whose parameters were set up according to the previously determined T1 and T2 values.

For NP-C6OF-PEG and NP-C6OF-PEG/C6OF-DO3AGd, the mother solutions’ nonlocalized 19F MRS data were acquired by means of a single pulse excitation sequence (TR = 2000 ms, Flip Angle = 90°, excitation bandwidth = 14 kHz, receiver bandwidth = 100 kHz, spectral resolution 12.21 Hz, 2000 averages for 33 min of acquisition time), setting the correct excitation frequency, optimizing the excitation bandwidth and the pulse gain.
The protocol for 19F MRI was optimized to obtain the best sensitivity from the 19F signal. The MR examination of the samples was carried out by means of a RARE sequences varying TR, TE, RARE factor (equivalently to the echo train length (ETL), it represents the number of echoes registered in one TR), slice thickness, and matrix size. The resulting optimal setting was used in the subsequent acquisitions. In order to evaluate the minimal concentration detectable in an acquisition time compatible with future in vivo applications, the same protocol was applied to the mother solution (40 mg/mL) and to the diluted samples (20 mg/mL).

Dynamic light scattering (DLS) measurements were performed on a Malvern Zetasizer Nano (Malvern, UK) in backscatter mode. Analyses were performed on nanoparticle solutions with concentration of 10 mg/mL or 3.7 mg/mL, using either disposable microcuvettes or disposable zeta cells (Malvern). The cell positioning factor was set to 0.83 mm and attenuator values of five or nine were auto-optimized as a function of nanoparticle concentration.

In this work, we explored the suitability of water-soluble gold nanoparticles protected by a fluorinated organic monolayer carrying Gd(III) complexes as a contrast agent for dual 1H/19F MRI procedures. This nanoparticle system was compared to both hydrogenated gold nanoparticles decorated with Gd(III) chelates and fluorinated nanoparticles devoid of paramagnetic centers. Embedding Gd(III) in the monolayer of fluorinated nanoparticles reduces the 19F NMR signal by only a relatively small amount. This allowed obtaining good quality MRI images at a 20 mg/mL concentration of nanoparticles. Furthermore, the Gd(III) chelates shortened the T1 relaxation time of the bulk water protons and under optimized acquisition conditions, the quality of 1H MRI images was comparable to that obtained by using hydrogenated nanoparticles carrying Gd(III) chelates at the outermost surface of the monolayer. Although not yet optimal, the performance scored in a preclinical setup for NP-C6OF-PEG/C6OF-DO3AGd represents a valuable proof of principle for the design of contrast agents for dual 1H/19F MRI based on gold nanoparticles. The observation that Gd(III) units deeply embedded in the monolayer of water-soluble gold nanoparticles exert a reduced effect on the relaxation times of bulk water gives hints for an improved design of nanoparticle-based contrast agents. Our group is busily working in order to improve the 19F MRI properties of the NPs by increasing the number of fluorine nuclei per NP, and to develop second generation Gd(III) fluorinated chelates to find the best compromise for optimal 1H relaxivity and an acceptably short 19F T1.

The following are available online at https://www.mdpi.com/2079-4991/9/6/879/s1, Syntheses and characterization of ligands and nanoparticles used in this work and details of the acquisition sequences for relaxometric and MRI experiments. 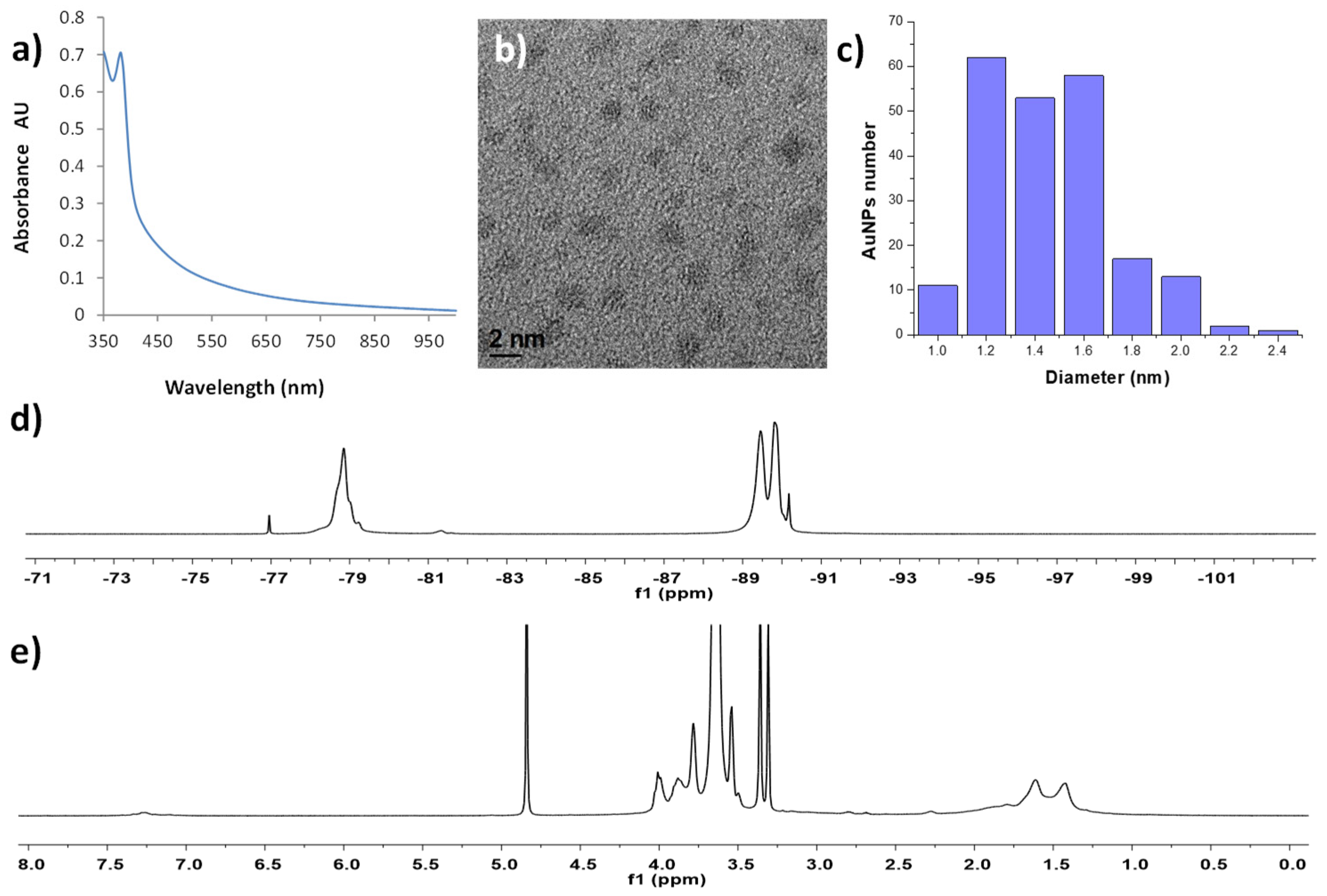 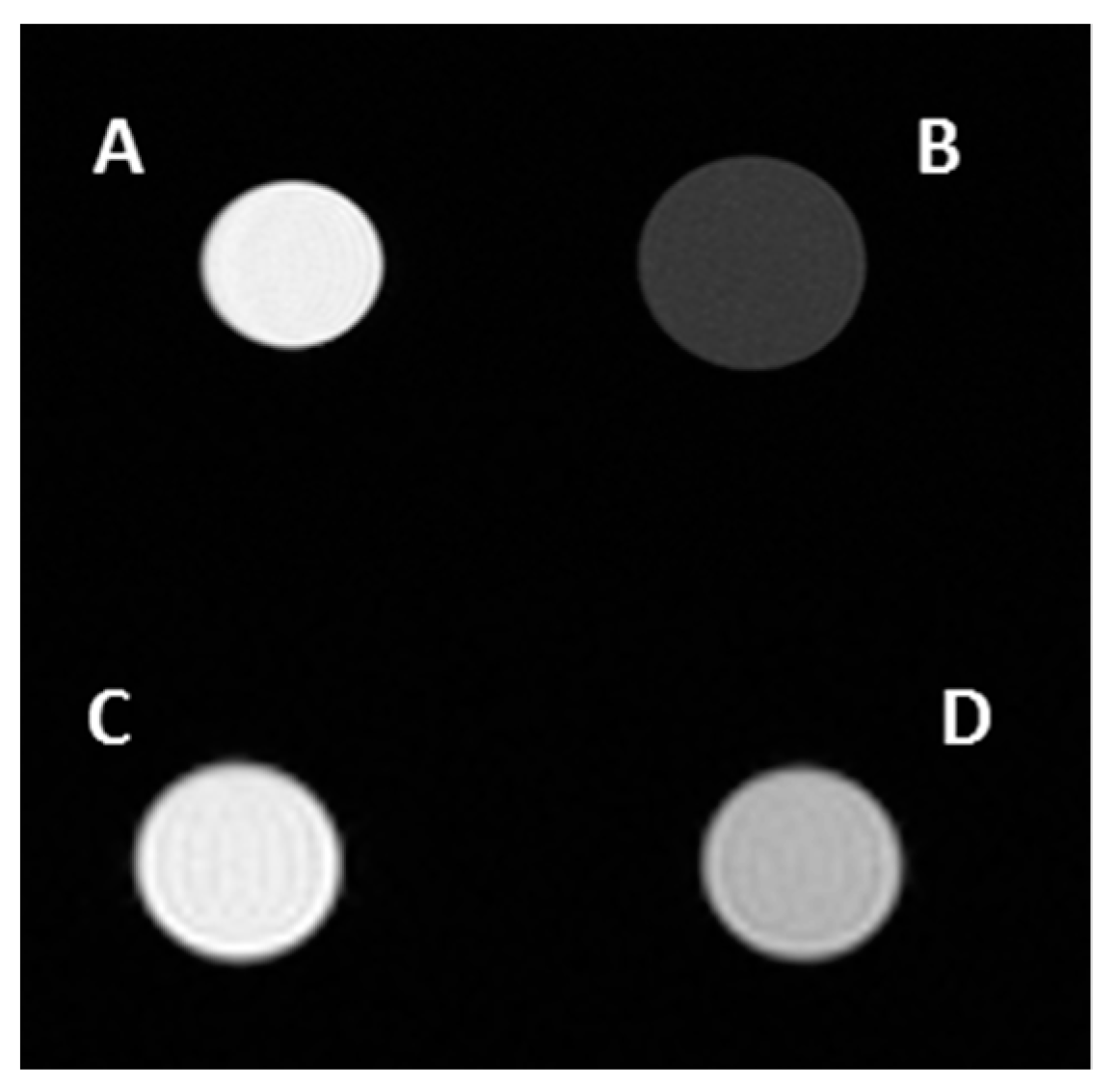