Polymeric nanofibers (NFs) have been extensively reported as a biocompatible scaffold to be specifically applied in several researching fields, including biomedical applications. The principal researching lines cover the encapsulation of antitumor drugs for controlled drug delivery applications, scaffolds structures for tissue engineering and regenerative medicine, as well as magnetic or plasmonic hyperthermia to be applied in the reduction of cancer tumors. This makes NFs useful as therapeutic implantable patches or mats to be implemented in numerous biomedical researching fields. In this context, several biocompatible polymers with excellent biocompatibility and biodegradability including poly lactic-co-glycolic acid (PLGA), poly butylcyanoacrylate (PBCA), poly ethylenglycol (PEG), poly (ε-caprolactone) (PCL) or poly lactic acid (PLA) have been widely used for the synthesis of NFs using the electrospun technique. Indeed, other types of polymers with stimuli-responsive capabilities has have recently reported for the fabrication of polymeric NFs scaffolds with relevant biomedical applications. Importantly, colloidal nanoparticles used as nanocarriers and non-biodegradable structures have been also incorporated by electrospinning into polymeric NFs for drug delivery applications and cancer treatments. In this review, we focus on the incorporation of drugs into polymeric NFs for drug delivery and cancer treatment applications. However, the principal novelty compared with previously reported publications is that we also focus on recent investigations concerning new strategies that increase drug delivery and cancer treatments efficiencies, such as the incorporation of colloidal nanoparticles into polymeric NFs, the possibility to fabricate NFs with the capability to respond to external environments, and finally, the synthesis of hybrid polymeric NFs containing carbon nanotubes, magnetic and gold nanoparticles, with magnetic and plasmonic hyperthermia applicability. View Full-Text
Keywords: electrospun nanofibers; cancer treatment; drug release; nanomedicine; biocompatible polymers; hyperthermia electrospun nanofibers; cancer treatment; drug release; nanomedicine; biocompatible polymers; hyperthermia
►▼ Show Figures 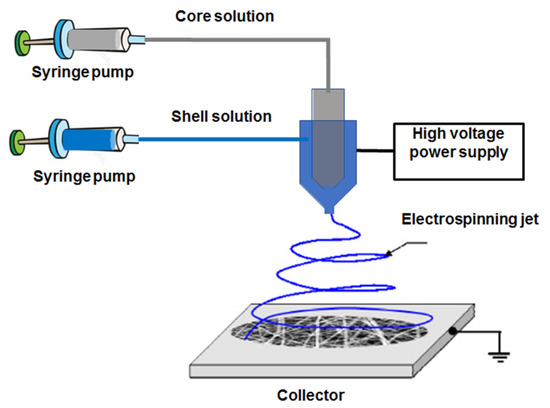