The release profiles of methotrexate, an anticancer drug, from the monoolein liquid crystalline cubic phases were studied. The cubic phases were used either in the form of a lipidic film deposited onto a glassy carbon electrode surface or in the dispersed form of magnetocubosomes, which are considered a prospective hybrid drug delivery system. Commonly, cubosomes or liposomes are employed, but not in the case of toxic methotrexate, known to block the receptors responsible for folate transport into the cells. The release profiles of the drug from the lipidic films were monitored electrochemically and described using the Higuchi model. They were also modified via changes in temperature; the release was faster, although it deviated from the model when the temperature was increased. Cubic phase nanoparticles (magnetocubosomes) containing hydrophobic magnetic nanoparticles placed in an alternating magnetic field of low frequency and amplitude, stimulated drug release from the suspension, which was monitored spectroscopically. These new biocompatible hybrid nanomaterials in the dispersed form allow to control the release of the drug at the appropriate sites, can be easily separated or relocated under external magnetic field and await further investigations of their in vitro cytotoxicity and in vivo biodistribution. View Full-Text
Keywords: methotrexate; cubic phase; magnetocubosomes; monoolein; liquid crystalline phase; drug delivery system; alternating magnetic field methotrexate; cubic phase; magnetocubosomes; monoolein; liquid crystalline phase; drug delivery system; alternating magnetic field
►▼ Show Figures 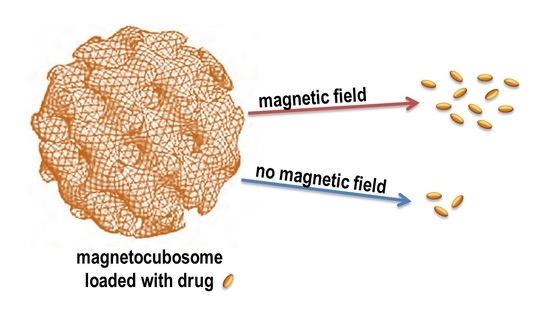