:
Hybrid materials play an essential role in the development of the energy storage technologies since a multi-constituent system merges the properties of the individual components. Apart from new features and enhanced performance, such an approach quite often allows the drawbacks of single components to be diminished or reduced entirely. The goal of this paper was to prepare and characterize polymer-metal hydroxide (polypyrrole-nickel hydroxide, PPy-Ni(OH)2) nanowire arrays demonstrating good electrochemical performance. Nanowires were fabricated by potential pulse electrodeposition of pyrrole and nickel hydroxide into nanoporous anodic alumina oxide (AAO) template. The structural features of as-obtained PPy-Ni(OH)2 hybrid nanowires were characterized using FE-SEM and TEM analysis. Their chemical composition was confirmed by energy-dispersive x-ray spectroscopy (EDS). The presence of nickel hydroxide in the synthesized PPy-Ni(OH)2 nanowire array was investigated by X-ray photoelectron spectroscopy (XPS). Both FE-SEM and TEM analyses confirmed that the obtained nanowires were composed of a polymer matrix with nanoparticles dispersed within. EDS and XPS techniques confirmed the presence of PPy-Ni(OH)2 in the nanowire array obtained. Optimal working potential range (i.e., available potential window), charge propagation, and cyclic stability of the electrodes were determined with cyclic voltammetry (CV) at various scan rates. Interestingly, the electrochemical stability window for the aqueous electrolyte at PPy-Ni(OH)2 nanowire array electrode was remarkably wider (ca. 2 times) in comparison with the non-modified PPy electrode. The capacitance values, calculated from cyclic voltammetry performed at 20 mV s−1, were 25 F cm−2 for PPy and 75 F cm−2 for PPy-Ni(OH)2 array electrodes. The cyclic stability of the PPy nanowire array electrode up to 100 cycles showed a capacitance fade of about 13%.
Keywords:
polymer-inorganic hybrid structure; supercapacitors; potential pulse electrodeposition

The research on the new energy-related materials (NERM) appears to be very significant now that the energy demand and consumption is rapidly increasing. It is widely accepted that conventional materials, based on the various oxides, conducting polymers, and hybrid materials, need to be re-designed at the nano-scale in order to fully exploit their electrochemical potential [1]. Quite often, such manipulation allows the negative impact of the diffusion to be reduced and rate capability to be improved [2,3]. Nanostructured materials as “building blocks” of electrochemical capacitors (ECs), batteries, and low-temperature fuel cells have recently attracted much interest [2]. While low-temperature fuel cells and batteries (like Li-ion or Ni-MH) are characterized by low power (up to 2 kW kg−1) and high energy density (up to 1 kWh kg−1), electrochemical capacitors may deliver a power density of 100 kW kg−1 at an energy density usually up to 15 Wh kg–1 [4]. On the one hand, it is said that electrochemical capacitors cannot replace batteries or fuel cells. On the other hand, their application niche is definitely different [5,6,7] and such a claim seems to be pointless. Notwithstanding, ECs might greatly complement other energy storage devices like batteries, protecting them against current fluctuations (at high power demand) and prolonging the system lifetime.
Electrochemical capacitor is an energy storage device that can be used in a vast range of applications, including portable electronics, large-scale power generators, and hybrid or electric vehicles [7]. Fast charging (within seconds), reliability, high stability over long-term cycling (up to a few thousands of cycles), and high power density (from 0.1 to 100 kW kg–1) [8] indicate that ECs can find a number of applications where a conventional, low-power source (like battery) cannot be used. Additionally, ECs could be used for energy recovery during repetitive processes, such as braking in vehicles (essentially in public transport) or load descending in lifts or cranes, due to their fast charging rate [8].
The mechanism of energy storage in electrochemical capacitors differentiates them for two main categories: electric double-layer capacitors (EDLCs) and supercapacitors [9]. However, one should be aware that the term “supercapacitor” is misleading and not recommended by the community since it is usually confused with double-layer-based devices. EDLCs store the electric energy in the electric double-layer, formed at the electrode/electrolyte interface. Thus, the energy is stored purely on the electrostatic manner. Supercapacitors store the energy by two mechanisms: in an electric double-layer (electrostatic interactions) and by redox-based phenomena, providing so-called pseudocapacitance (PC) [4]. However, it has to be mentioned that the term “pseudocapacitance” is recently quite often overused and confused with typical faradaic storage [10,11,12].
To date, various metal oxides and conducting polymers have been extensively studied as pseudocapacitive materials [13]. Conducting polymers, e.g., poly(3,4-ethylenedioxythiophene) (PEDOT), polyaniline (PANI), and polypyrrole (PPy), as organic polymers with electronic properties typical of semiconductors, can be used as future materials for data storage, photovoltaic cells, and supercapacitors [14,15,16]. Furthermore, polymer-based materials can also be used for template-assisted electrosynthesis of hybrid metal-polymer nanowires [17] and deposition or dispersion of the particles in the polymer matrix [18,19]. Metal oxides, in the form of thin films or nanostructures, can also be used as the electrode material for fuel cells, lithium-ion batteries, and electrochemical supercapacitors [20]. Considerable scientific attention has been directed towards the use of NiO-based electrodes in high-performance ECs, because of the low-cost and facile synthesis with a diversity of approaches [14,21,22,23,24,25]. Some reports suggested that the nickel hydroxide can also be successfully used as the material for electrochemical supercapacitors [26,27,28,29,30,31,32,33,34,35,36,37,38,39]. However, its electrochemical performance suggests somewhat hybrid energy storage mechanisms in the devices exploiting this material [20].
An increasing number of reports about the use of hybrid/composite materials in electrochemical capacitors, e.g., polymer with carbon/graphene [40,41,42,43], tin oxide [44,45,46], ruthenium oxide [47,48], manganese oxide [49,50], or nickel hydroxide [51,52,53,54,55,56,57], can be found in the literature. It seems that the application of hybrid material in energy storage devices improves their performance because these multicomponent systems combine the properties of their components. This can result in the elimination of the disadvantages of individual components.
Since the capacitance of electrochemical capacitors is proportional to the electrochemically accessible surface area at the electrode/electrolyte interface, the active surface of the electrode material is of great importance. Furthermore, one-dimensional nano-objects can diminish the impact of the diffusion resistance of an electrolyte species during the charge–discharge process. Hence, the hybrid polymer-transition metal hydroxide nanowire arrays seem to be an excellent material for the fabrication of electrodes for supercapacitors. To our knowledge, no previous reports on the preparation of polymeric nanowires modified with nanoparticles of Ni(OH)2 in electrochemical capacitors have been published. The obvious advantages of such material are the low cost and simple electrode preparation when the nanoporous anodic aluminum oxide (AAO) is used as the template.
The purpose of this study was to obtain and characterize a new hybrid material based on PPy-Ni(OH)2 nanowire array. It was expected that this material would demonstrate a high capacitance. The hybrid polymeric-metal hydroxide nanowires were fabricated by potential pulse electrodeposition of pyrrole and nickel hydroxide into the nanoporous anodic alumina oxide template. A comprehensive characterization of the synthesized hybrid nanowire arrays was done, and the obtained results indicated that the material synthesized this way shows promising electrochemical behavior.

The PPy-Ni(OH)2 nanowire array electrodes were synthesized according to the procedure presented in Figure 1.
Free-standing AAO membrane with a thickness of about 40 µm was obtained as a result of the anodization and voltage detachment procedure (Figure 1a). To enable electrochemical deposition, one side of the non-conductive AAO membrane was covered with a thin conductive Au layer by using a vacuum sputter coater (Emitech K575X, Laughton, United Kingdom). A thin layer of Au was then thickened by electrochemical deposition of gold from a commercially available gold plating solution (Umicore, Hanau, Germany, Auruna® 5000, Au content 7 g dm−3), by applying a constant current density of 1 mA cm−2 (Figure 1b). After that, the AAO/Au template (gold served later as a current collector) was fixed in a Teflon® coated electrode, which was placed in the three-electrode electrochemical cell. The working surface area of the AAO membrane was made constant by using the O-ring with the inner diameter of 3 mm. The synthesis of polypyrrole-Ni(OH)2 hybrid nanowire array (Figure 1c) was performed in a three-electrode configuration using the Teflon® coated Au/AAO template as a working electrode, Ag|AgCl as a reference electrode, and a Ti grid as a counter electrode. The electrodeposition of hybrid nanowires was carried out at room temperature using a single Watts-type nickel bath (NiSO4∙6H2O (Sigma Aldrich, Saint Louis, MO, USA, 98%), NiCl2∙6H2O (Sigma Aldrich, Saint Louis, MO, USA, 97%), H3BO3 (Avantor Performance Materials Poland S.A., Gliwice, Poland, 99.5%)) [60] containing 0.15 M pyrrole monomer (Sigma Aldrich, Saint Louis, MO, USA, 98%) with 0.10 M LiClO4 (Sigma Aldrich, Saint Louis, MO, USA, 95%), and 0.10 M Na2CO3 (Sigma Aldrich, Saint Louis, MO, USA, 99.5%). The pH value of the solution was adjusted to 4–5 by hydrochloric acid (Avantor Performance Materials Poland S.A., Gliwice, Poland, 35–38%) or sulfuric acid (Sigma Aldrich, Saint Louis, MO, USA, 95–98%) in order to prevent the precipitation of poorly soluble nickel carbonate [61]. After the potential pulse electrodeposition, a free-standing hybrid PPy-Ni(OH)2 nanowire array was obtained by chemical etching of the AAO template in a 1 M NaOH solution (Figure 1d). A pulse waveform applied during deposition is depicted in Figure 2. 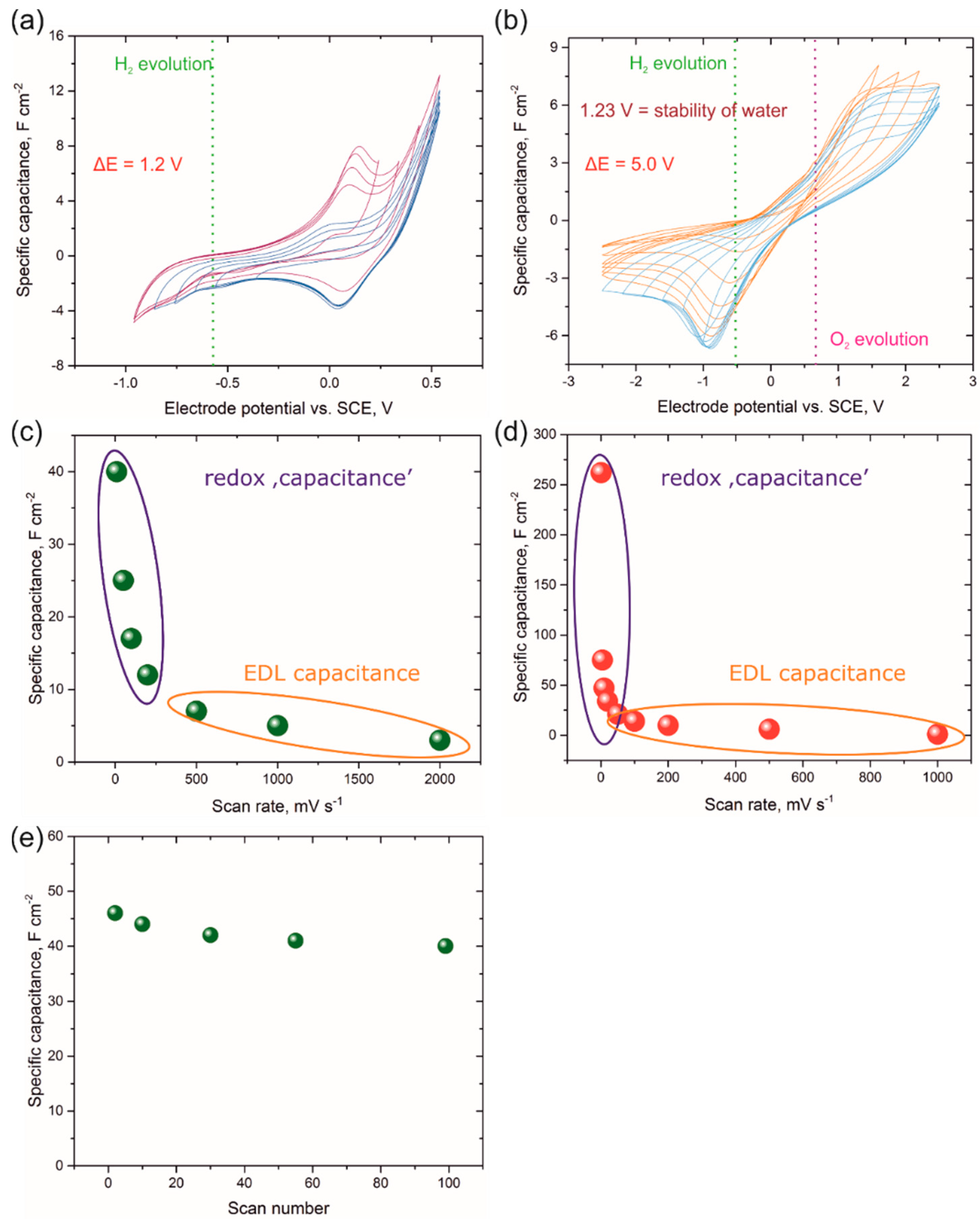