Cuprous oxide (Cu2O) was synthesized for the first time via an open bipolar electrochemistry (BPE) approach and characterized in parallel with the commercially available material. As compared to the reference, Cu2O formed through a BPE reaction demonstrated a decrease in particle size; an increase in photocurrent; more efficient light scavenging; and structure-correlated changes in the flat band potential and charge carrier concentration. More importantly, as-synthesized oxides were all phase-pure, defect-free, and had an average crystallite size of 20 nm. Ultimately, this study demonstrates the impact of reaction conditions (e.g., applied potential, reaction time) on structure, morphology, surface chemistry, and photo-electrochemical activity of semiconducting oxides, and at the same time, the ability to maintain a green synthetic protocol and potentially create a scalable product. In the proposed BPE synthesis, we introduced a common food supplement (potassium gluconate) as a reducing and complexing agent, and as an electrolyte, allowing us to replace the more harmful reactants that are conventionally used in Cu2O production. In addition, in the BPE process very corrosive reactants, such as hydroxides and metal precursors (required for synthesis of oxides), are generated in situ in stoichiometric quantity, providing an alternative methodology to generate various nanostructured materials in high yields under mild conditions. View Full-Text
Keywords: bipolar electrochemistry; green synthesis; substructure; photocurrent; semiconductors bipolar electrochemistry; green synthesis; substructure; photocurrent; semiconductors
►▼ Show Figures 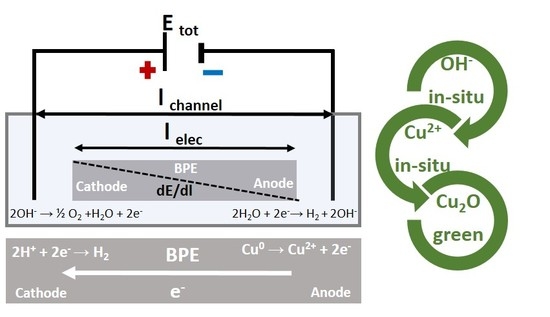