Surface topography is one of the main factors controlling cell responses on implanted devices and a proper definition of the characteristics that optimize cell behavior may be crucial to improve the clinical performances of these implants. Substrate geometry is known to affect cell shape, as cells try to optimize their adhesion by adapting to the irregularities beneath, and this in turn profoundly affects their activity. In the present study, we cultured murine calvaria MC3T3-E1 cells on surfaces with pillars arranged as hexagons with two different spacings and observed their morphology during adhesion and growth. Cells on these highly ordered substrates attached and proliferated effectively, showing a marked preference for minimizing the inter-pillar distance, by following specific pathways across adjacent pillars and displaying consistent morphological modules. Moreover, cell behavior appeared to follow tightly controlled patterns of extracellular protein secretion, which preceded and matched cells and, on a sub-cellular level, cytoplasmic orientation. Taken together, these results outline the close integration of surface features, extracellular proteins alignment and cell arrangement, and provide clues on how to control and direct cell spatial order and cell morphology by simply acting on inter-pillar spacing.
Keywords: pillar; scaffold; osteoblasts; regenerative medicine pillar; scaffold; osteoblasts; regenerative medicine

Implanted devices require an adequate tissue-material interface to properly function [1], and it is therefore not surprising that a great deal of effort has been made to investigate and implement surface topographies capable of directing cell behavior and thus affecting the formation of vital tissue connecting the organism and the implant [2]. Endosseous implants in particular have a long history of being developed along these lines of thought [3]. Most endosseous devices are provided with roughened surfaces, which have been shown to promote the differentiation of osteoblasts and therefore to a phenotype that is capable of depositing new bone [4,5]. Starting from the assumption that macroscopic irregularities would improve implant retention by mechanical interlocking, research studies have progressively shown that tissues and cells therein can discriminate the presence of roughness on a micron and sub-micron scale and that the geometry and pattern of surface irregularities affect cell behavior [6,7]. Furthermore, surface wettability [8], surface charges, protein adsorption [9,10,11], and material stiffness [12] can all compound on the terminal biological effect of the material, thus making it very difficult to isolate the features that can regulate cell behavior and how these can be tuned as desired.
The first relevant step to establish an effective cell–material interface is cell adhesion [13]. How cells attach to a surface then dictates cell shape [14]. Cell morphology has then been closely associated to transcription of programs for cell differentiation [6]. Cell adhesion is at the center of cell activity, for adhering cells, such as osteoblasts. The formation of focal adhesions, the main attachment mediators, allows the organization of cell cytoskeleton and its mechanical activation, which in turn shapes how focal adhesions align in the cell [15,16]. Actin microfilaments are mainly responsible for the generation of tensile forces in the cytoskeleton [17], thanks to the combined activity of actin and myosin, and cell tension is required for the activation of mechanically-regulated pathways, such as YAP/TAZ signaling [18], and, for nuclear deformation, which has been shown to affect the transcriptional activity of specific chromatin domains, which, e.g., control cell differentiation [19]. To better understand cell morphology on biomaterials, new instruments have been developed, such as the Focused Ion Beam Microscope, which combines a Scanning Electron Microscope with a Gallium ion beam that can cut through samples, through minimal manipulation, and allow for close examination of their conformation [20]. The present study relied on such microscopy tools to investigate how hexagonal micro-patterned substrates affect the behavior of murine calvaria MC3T3 osteoblastic cells, a well-known model for bone cells that is capable of mimicking many physiological features of normal osteoblasts [21].

We tested murine calvaria MC3T3-E1 cells on two kind of surfaces. The formers were represented by 0.9 µm high cylindrical pillars clustered in hexagons as shown in Figure 1. Surface wettability did not differ between 3.6 and 4.0 groups (data not shown).
Interestingly, when samples were pre-incubated for 24 h in complete medium, filamentous precipitates were observed connecting adjacent pillars (Figure 2). This finding was then observed more abundantly in the presence of cells, as expounded below.
We then plated MC3T3-E1 cells on both 3.6 and 4.0 surfaces and observed them with a SEM-FIB microscope after 1, 6, 24, and 48 h of culture (Figure 3, Figure 4, Figure 5 and Figure 6). After just 1 h of culture, cells displayed large lamellipodia that anchored and pulled the cell body by grasping onto groups of pillars or even whole pillar hexagons, while cells, as expected, maintained a rounder shape, especially on 3.6 samples (Figure 3A,B). Small, one-pillar projections were also visible around the cell body on 4.0 surfaces, as visible in Figure 4A,B.
By 6 h of culture, osteoblastic cells displayed elongated shapes, as they established their first cell-to-cell contacts, via long and thin projections, both on 3.6 and 4.0 surfaces (Figure 3C,D; Figure 4C,D). Interestingly cell membranes embraced not only the tip of the pillar but covered its sides, almost reaching its base.
At higher magnification, the microscope showed that uninterrupted chains of these septs departed from the cell body encasing groups of pillars already after 6 h and more markedly after 24 h of culture (Figure 3E,F; Figure 4E,F), like feelers exploring the extracellular environment (Figure 3F). These septs got to create a sort of aura around the whole cell body and joining adjacent cells and bridging over the gaps that separated neighbour cells. A remarkable example of these structures can be observed in Figure 5, which can be easily interpreted as representing a migrating cell, due to its distinctive morphology. The broader leading edge can be easily distinguished from the narrower rear edge (Figure 5). Most noticeably, a crown of inter-pillar filaments is seen surrounding the whole leading edge, while abruptly terminating on the rear end. At this time-point, several large one-hexagon-wide podosomes, which were not observed at earlier time-points, became visible around the cell body, beside lamellipodia (Figure 3F; Figure 4F).
FIB analysis of 3.6 and 4.0 surfaces at 48 h (Figure 6) showed, however, that the cell body, where intracellular tension was arguably higher, was stretched over the pillars, without entering the space in between the pillars (Figure 6B or Figure 6E), similarly to what we observed with SLA surfaces [20] and unlike the peripheral septs that can even cover whole pillars. The higher tension attained in the cytoplasm of the cell body is indirectly confirmed by its thinness, as the shape of the underlying pillars can be guessed through the cytoplasm (Figure 6C or Figure 6E). Only the nuclear area is obviously thicker at 48 h of culture, but not as thick as at 1 or 6 h and this implies a remarkable nuclear deformation, which the literature associated with a potent activator of differentiation [19]. FIB sections of 4.0 samples at 48 h (Figure 6E) suggest that the cell-to-pillar contact area may be somewhat larger than with 3.6 pillars (Figure 6B) and the cytoplasm can encase up to 20% of the height of the pillar (Figure 6E). Thin membrane projections that descend along the sides of the pillars are often undistinguishable from the precipitates described above (Figure 6F).
Cell morphology was analysed after SEM observation and cell perimeter, area and elongation factor were calculated at 6, 24, and 48 h of culture (Figure 7). Although no difference in cell perimeter was observed at 6 h of culture, cell perimeter on 3.6 surfaces was significantly higher than on 4.0 surfaces at both 24 (p = 0.0275) and 48 h (p = 0.0103) of culture (Figure 7A). Similarly, cell area on 3.6 surfaces was significantly greater than on 4.0 surfaces at 48 h of culture (p = 0.0018), while it only tended to be greater on 3.6 surfaces at 6 and 24 h of culture, albeit without reaching statistical significance (Figure 7B). Besides being bigger, cells on 3.6 surfaces were also more elongated, as shown in Figure 7C: the elongation factor (cell length/cell width) was significantly higher in cells on 3.6 surfaces, although only at 48 h (p = 0.0003).

We assessed cell viability on 3.6 or 4.0 pillars by staining cells with vital dye Calcein-AM or Propidium Iodide, which stains dead cells (Figure 8A,B). Both surfaces confirmed supporting cell viability, as cells mostly presented green. We then quantitated fluorescence using a dedicated software (Nikon Br5.11 software, Nikon, Tokyo, Japan), as an index of cell viability, as presented in Figure 8C, normalized by the fluorescence levels on smooth silicon, used as control: cell viability at 24 h of culture was comparable to control, while cells on 3.6 pillars tended to display a higher level of viability by 48 h (Figure 8C). Cell viability in both groups at 48 h was higher than at 24 h (p < 0.001 in the 3.6 group and p < 0.05 in the 4.0 group).

Osteoblastic cells were then stained for vinculin, using a primary anti-Vinculin monoclonal antibody, actin microfilaments, using TRITC-labelled phalloidin, and nuclei, with DAPI (Figure 9), after 24 h of culture. The cytoskeleton appeared composed by well visible stress fibers running across the whole cell body and anchored to the substrate by long adhesion complexes at the opposite extremities and showing small dot-like focal adhesions scattered on the cell base, on both 3.6 (Figure 9A,B) and 4.0 (Figure 9C,D) substrates. Interestingly, such dot-like focal adhesions could be seen arranged in hexagonal clusters (Figure 9B arrowhead), likely corresponding to the pattern of the pillars below. By comparing the outline of these hexagons with the actin fibers it is apparent that most stress fibers are actually aligned to the arrays of the underlying pillars. Actin filaments formed visible reinforcements around the pillars (Figure 9B), thus creating a honeycomb-like pattern in the red fluorescence labelling. Single channel fluorescence images of cells microphotographs are available in supplementary materials (Figure S1).

To investigate if changing the stability of the cytoskeleton would affect cell behaviour on pillars, we plated cells on the samples as described previously and treated them with 250 nM Nocodazole, a known inhibitor of microtubule polymerization. Cells, unsurprisingly, appeared mostly round, often flattened out on the surface and, interestingly, lost their prevalent orientation on the pillars (Figure 10). A vast distinctive aura of inter-pillar septs was visible all around the cells, both on 3.6 (Figure 10A) and on 4.0 substrates (Figure 10B). Furthermore, the cytoplasm showed signs of cell damage with increased porosity.

Taken together, these data suggest that cells condition the substrate around them by secreting extracellular components, likely of a protein nature. The deposition of these components is restrained, at least on such patterned surfaces, by the geometric conformation of the substrate material. The spatial arrangement of these precipitates matches the inner cytoskeletal organization and the alignment of cells on the substrate and all these elements, both precipitates and cell projections, seem to prefer pathways that minimize the gaps between irregularities. Future studies will have to address the nature of these precipitates and whether the substrate features affect the composition of such precipitates. This could be an important clue that could be easily tuned to control cell arrangement on the substrate, and, more importantly, possibly their behavior. 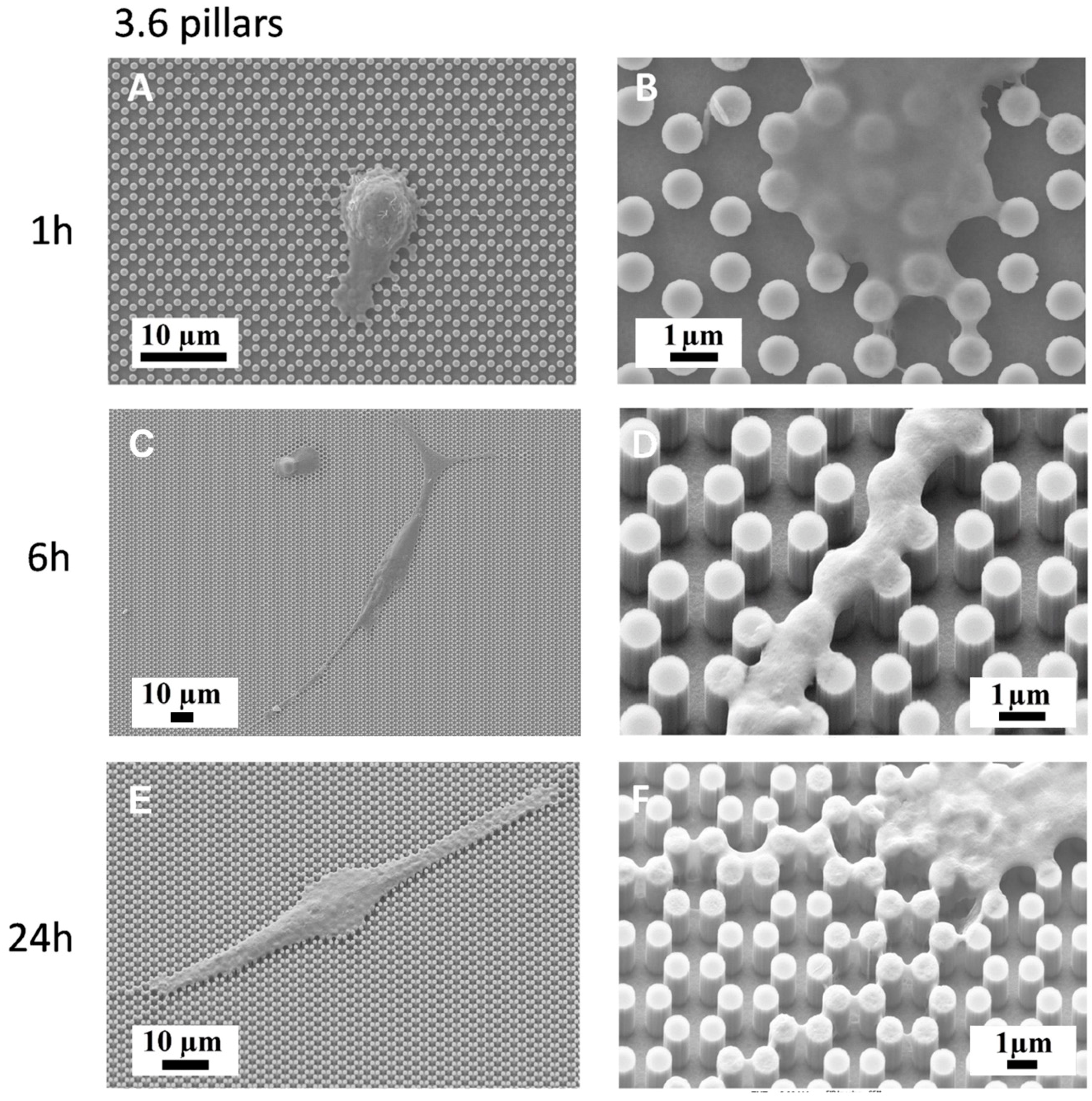 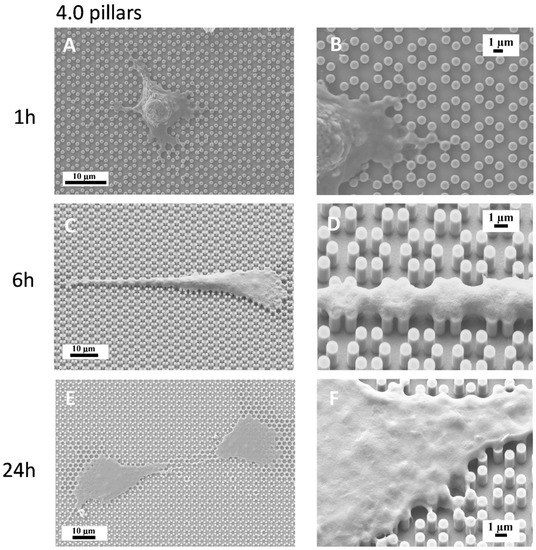 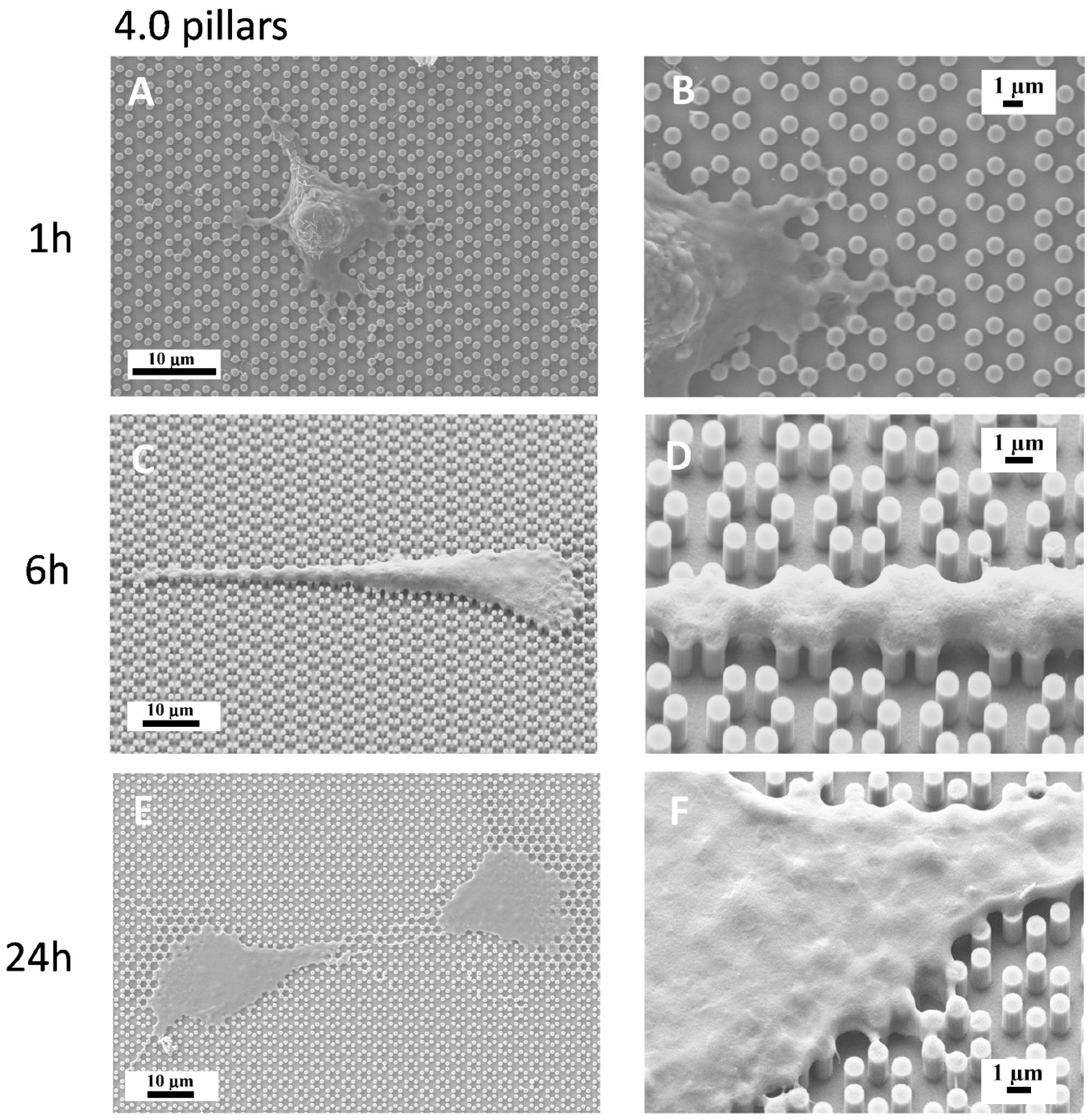 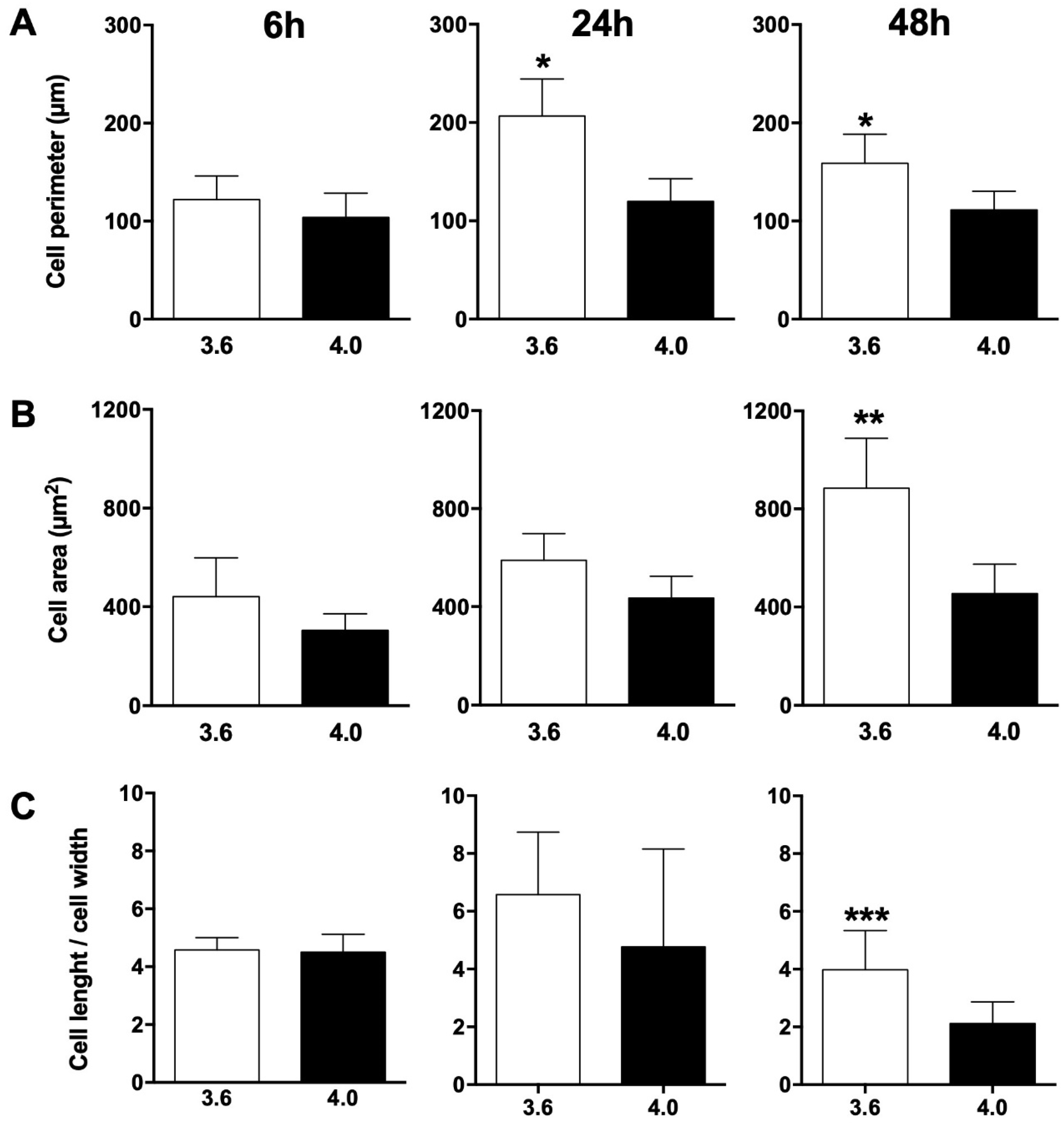