Distinguishing infinitesimal amounts of chemicals or microbials in a precise and simple manner is one of the most important techniques in academia and industry. Classical sensor technology is categorized as electromagnetic (gamma radiation, optics, microwave, radio wave, and Eddy current), mechanical (sound, MEMS, and fluid), magnetic, chemical (affinity, catalytic reactions, electrochemistry, and biochemistry), nuclear (nuclear magnetic resonance), and a combination of them (opto-acoustics and membrane technology) [1,2]. Generally, the key features of sensor technology are the low cost, small size, robustness, selectivity, and sensitivity [1,3].
Recently, the use of ecofriendly materials has been one of the main points in research and industrial manufacturing. The M13 bacteriophage, which can be categorized as a natural polymer, has been a major research focus owing to its target-specific response in chemical reactions with outstanding sensitivity [4]. The bacteriophage is a human-safe viral material that only infects certain criteria of bacteria, such as Escherichia coli. [5].
The filamentous type of M13 consists of approximately 2700 copies of the spirally arranged pVIII major coat protein on the body, with 5 to 7 copies of pIII, pVI, pIX, and pVII minor coat proteins at each end. M13 has a regular form, with a length and diameter of ~880 nm and ~6.6 nm, respectively. The genome structure and protein sequences of the M13 bacteriophage are fully understood. Therefore, M13 bacteriophages are very simple to genetically engineer to achieve the desired biochemical properties [6,7,8,9]. Figure 1 shows the basic protein structures and genetic engineering pathways of M13 bacteriophages. For example, genetically modifying the pVIII protein of M13 bacteriophage to possess the tryptophan–histidine–tryptophan (WHW) peptide sequence results in it showing specific binding affinity to nitrotoluene derivatives [4,10,11,12,13,14]. Consequently, the specific binding affinity to target materials, including chemical and biological materials, by simple genetic engineering provides great possibilities to use M13 bacteriophages as the core material of sensors.
M13 bacteriophages have a filamentous shape and different protein configurations at each end. One end has the pVI and pIII protein and the other has the pVII and pIX protein. By the well-defined, anisotropic structure and monodispersity caused by the natural character of M13, the material can be fabricated easily in hierarchical self-assembled structures using appropriate techniques [4,14]. The structure and behavior of M13 bacteriophages during fabrication are similar to those of liquid crystals. The bacteriophage can also be modified chemically and genetically to reveal a range of features, such as desired functionality and target-specific affiliation [11,12,13].
The target-specific reactivity character of the M13 bacteriophage makes it advantageous for sensor applications. The other strong point of the M13 bacteriophage is its ability to form higher-order dimensional structures in a specified order over self-assembly technology [13]. High-dimensional structures using natural building blocks, such as the M13 bacteriophage, were inspired by natural systems, such as the collagen bundle structure [4]. Although the imitation of a natural assembly structure on the micro scale using artificial building blocks, such as polymers or artificial nanomaterials, is progressing slowly, due to uncertainty and complexity, using natural building blocks such as M13 bacteriophage can be a solution. The filament structure and short dispersion of the M13 bacteriophage allow liquid crystal-like behavior in suspension under controlled conditions [15,16]. This liquid crystal behavior of the M13 bacteriophage can be managed mostly by the concentration of the M13 bacteriophage aqueous suspension. The crystal structure of self-assembled M13 bacteriophages shows nematic-, cholesteric-, and smectic-phase at low, medium, and high concentrations, respectively [16]. M13 is also attractive owing to its easy growth and handling characteristics. The use of natural substances as a building block makes a synthetic process possible at low cost under a non-toxic environment. The fabrication process associated with M13 bacteriophages using aqueous self-assembly technology allows easy processing without the need for organic solvents and additional processing. By using the pulling technique, concentration of M13 bacteriophage aqueous solution and polling speed of substrate are main factors in the process [17,18].
An additional outstanding benefit of M13 bacteriophages is the easy genetic modification for the specific binding affinity to definite target substances. Each coat protein can be modified genetically using phage display technology. Random phage libraries containing more than 1.0 × 1011 random peptide sequences of M13 bacteriophages are screened for specific target materials [19,20]. The binding phage on the target material is then selected and the bacteria are infected and amplified. After repeating this process to isolate the target-specific binding phage, the target-specific peptide can be recognized by DNA analysis [21,22]. Recently, the technology has developed a M13 bacteriophage that binds specifically to several inorganic resources, e.g., GaAs, GaN, Ag, Pt, Au, Pd, Ge, Ti, SiO2, quartz, CaCO3, ZnS, CdS, Co, TiO2, ZnO, CoPt, FePt, BaTiO3, CaMoO4, and hydroxyapatite [21,22,23,24,25]. The M13 bacteriophage can be made to have specific functionality by genetically engineering to carbon-based nanomaterials, such as C60, graphene, and carbon nanotubes [24,25]. Moreover, these specific binding capacities of the M13 bacteriophage can be used as templates to produce various nanostructures, such as highly monodisperse nanostructures [26,27,28]. This review introduces the current advances of M13 bacteriophage-based biosensors.

The M13 bacteriophage has a systemically regular shape because it is a natural substance. The highly certain shape and specific reactivity to the target material provided to the M13 bacteriophage have great potential to become a building template [6]. Haberer et al. discussed the gold nanopeapod structure covered with polypyrrole (PPy) located directly between platinum electrodes. In this particular experiment, an M13 bacteriophage was genetically engineered to have the VSGSSPDS protein sequence on its pVIII major coat protein. A gold-specific M13 bacteriophage was covered and formed a bridge between two pre-fabricated platinum electrodes, and then reacted with a gold solution. A commercial gold electroless deposition reagent was used to increase the size of the gold nanoparticle. Finally, electrodeposition of PPy was conducted to complete the gold PPy nanopeapod structure between the electrodes [55,56]. The product was applied as an NH3 gas sensor due to nucleophilic NH3 attack of the polymer backbone, decreasing the conjugation length, and irreversibly increasing the resistance. In other words, NH3 molecules in this reaction act as an electron donor. Consequently, decreasing the electron hole concentration of the polymer results in a reversible de-doping process [57,58,59]. In this experiment, the irreversible reaction has competitive advantage over the reversible reaction, and partial recovery after gas sensing was achieved. This study showed an excellent detection limit of 0.005 ppm by NH3 exposure to a M13 bacteriophage template gas sensor [55]. This technique implies resistance of one-dimensional nanowires which were fabricated using M13 bacteriophage as gas sensor. Due to the extremely thin layer of PPy and the catalytic effect of Au NPs, this technique showed great sensitivity. This structure highly depends on random connection between electrodes. Better performance can be expected from this structure by optimized structure such as nano pattern between two electrodes.
SERS technology based on the nanowire structure can be improved significantly by controlling the density of “hot spots”, where Raman signal amplification occurs [60,61] For more effective signal amplification, the sensor surface needs to be highly functionalized, particularly around hot spots [62,63]. Jung et al. recently reported an M13 bacteriophage-covered silver nanowire SERS sensor to detect a certain pesticide, paraquat (PQ), which is a widely used herbicide. The M13 bacteriophage was functionalized genetically to have the WHW peptide sequence for the PQ specific binding affinity on its pVIII major coat protein. When the sensor was compared with the wild type M13 bacteriophage sensor and a sensor without M13 bacteriophage, the genetically functionalized sensor showed superior selectivity to the PQ sample [60]. They also tested the selectivity upon different pesticides of a functionalized M13 bacteriophage-SERS sensor using bipyridylium, which is a common herbicide. The WHW-type M13 bacteriophage-functionalized SERS sensor showed a better Raman signal when PQ was detected than bipyridylium at the same concentration. In Figure 9, using a hand-held Raman spectrometer, they could detect PQ concentrations as low as 0.1 μg/cm3, which is far below the guidelines of most countries. Raman intensity changes before and after the washing step showed best results for WHW type M13 bacteriophage sensors. It also showed better efficiency when compared with wild type and nanowire without M13 bacteriophage. By measuring different pesticides (diquat (DQ) and difenzoquat (DIF)), PQ was the most suitable pesticide. [60,64]. This practical research showed detection results using a hand-held Raman spectrometer and agricultural product without pretreatment.

A range of variations of WHW type M13 bacteriophages have common specific affinity to TNT molecules [4]. A π-π interaction was assumed among TNT molecules, histidine, and tryptophan based on experiment [4,6]. On the other hand, there is a lack of consideration as to whether WHW is really the best structure for TNT molecules or how this specific interaction occurs systemically and theoretically. Recently, Lee et al. reported the results of computational calculations of this interaction among TNT molecules, histidine, and tryptophan, using quantum mechanics (QM) calculations [76]. The theoretical candidates for comparison were WHW-, WAW-, WHA-, and AHW-simulated peptide sequences (A: Alanine). The specific binding affinity between the WHW and TNT molecules was confirmed experimentally using an SPR sensor system due to the significantly lower detection limit (500 fM) than any other sensor system based on M13 bacteriophages [4,77,78,79,80]. The dissociation constants for TNT molecules using the WHW-, WAW-, WHA-, and AHW-type M13 bacteriophages were 7.0 × 10−12, 2.7 × 10−11, 1.1 × 10−10, and 3.3 × 10−8, respectively. By QM calculations using Jaguar v8.4 software with the M06-2X/6-31G ** level of density functional theory, the binding energy of WHW-TNT was calculated to be 22.7 kcal mol−1. Figure 13 shows the active binding mechanism for WHW and alanine substituted peptide sequences. For WAW, WHA, and AHW, the binding energy was 19.9, 16.0, and 18.8 kcal mol−1, respectively. Finally, they confirmed the strong linear correlation between the experimental Gibbs free energy and calculated binding energy [76].

This research was supported by a grant of the Korea Health Technology R&D Project through the Korea Health Industry Development Institute (KHIDI), funded by the Ministry of Health and Welfare, Korea (HI17C1662). This work was also supported by the National Research Foundation of Korea (NRF) Grant funded by the Korean Government (MOE) (No. NRF-2016R1A6A3A11931113 and NRF-2017M3A9E4048170). 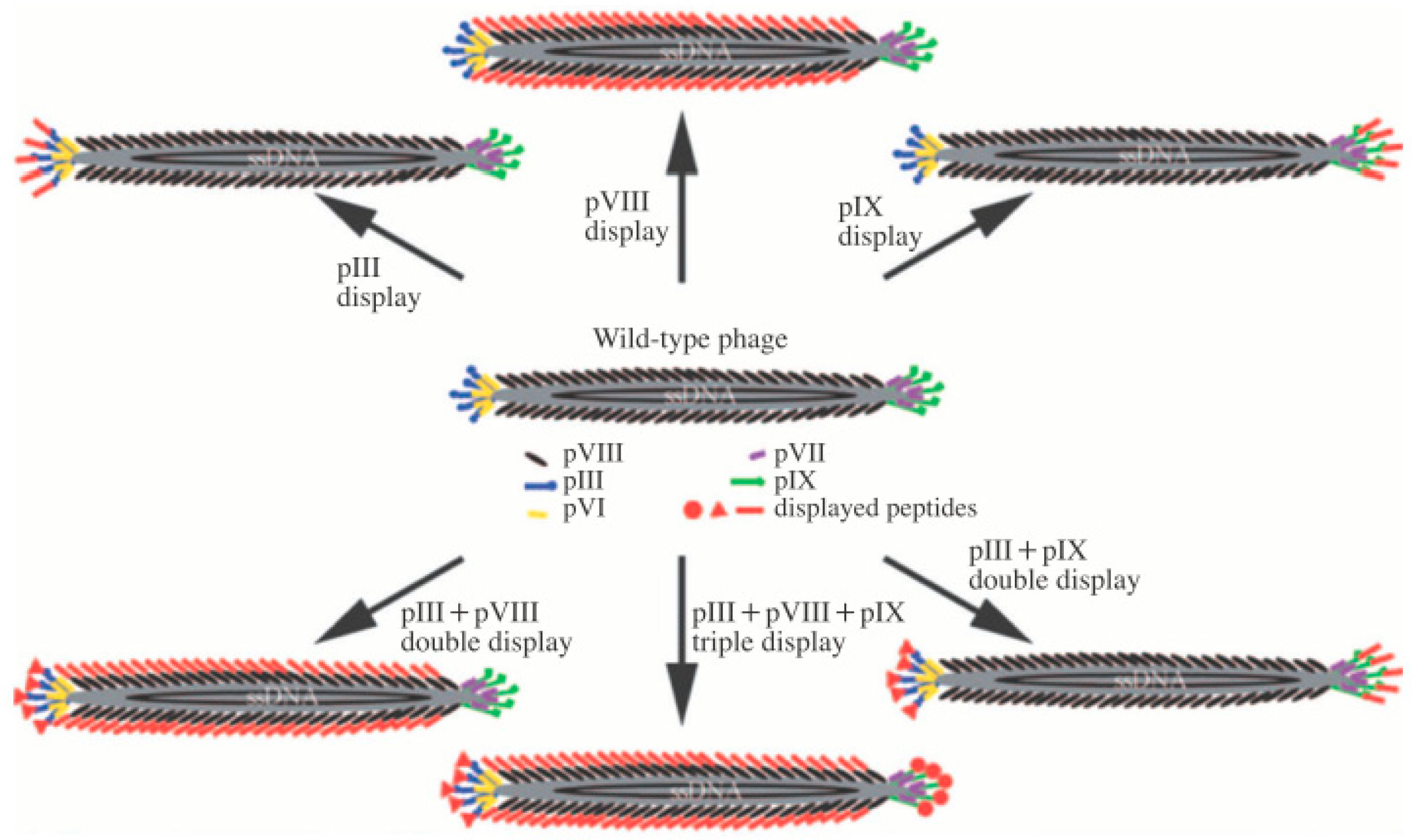 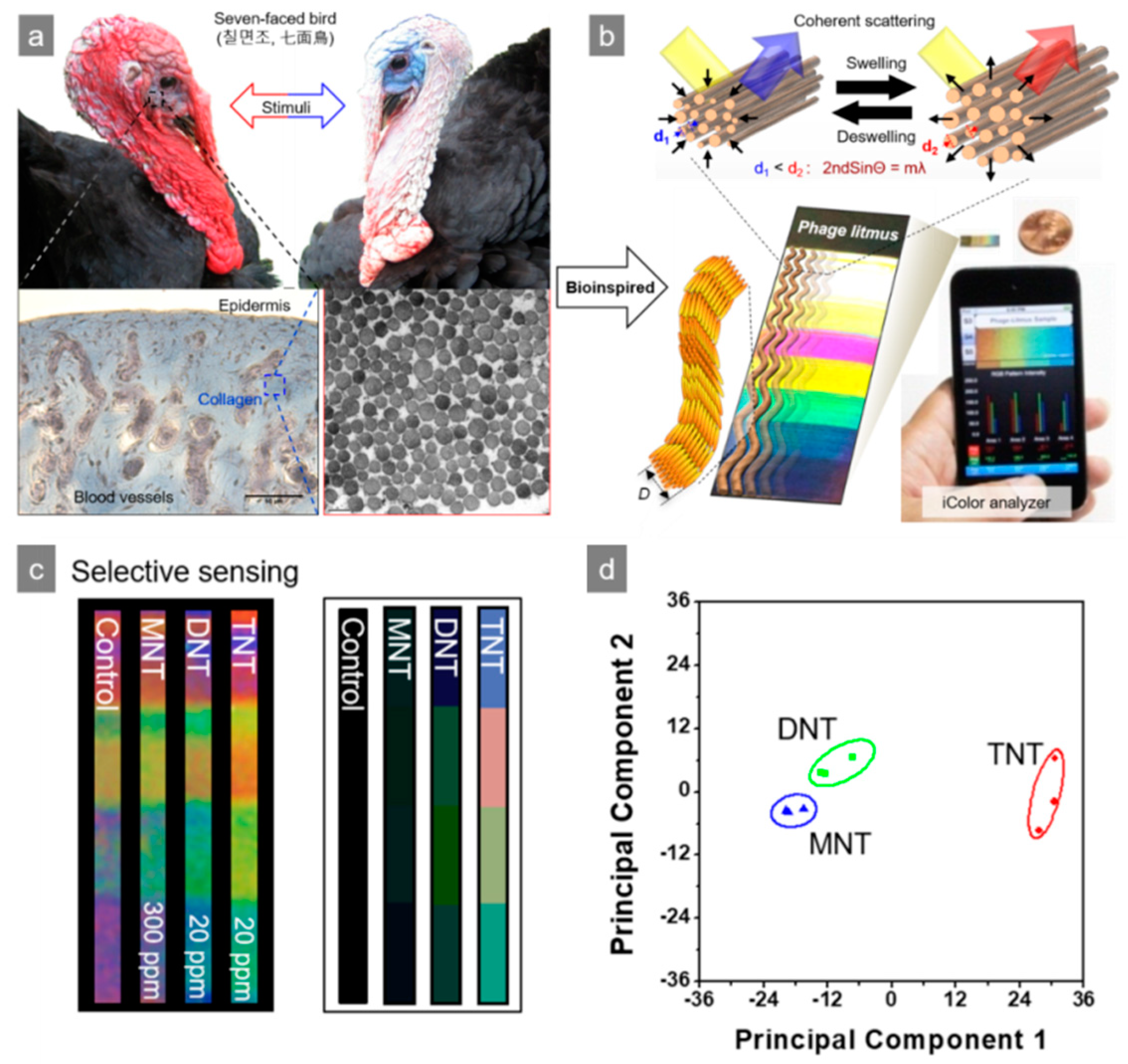 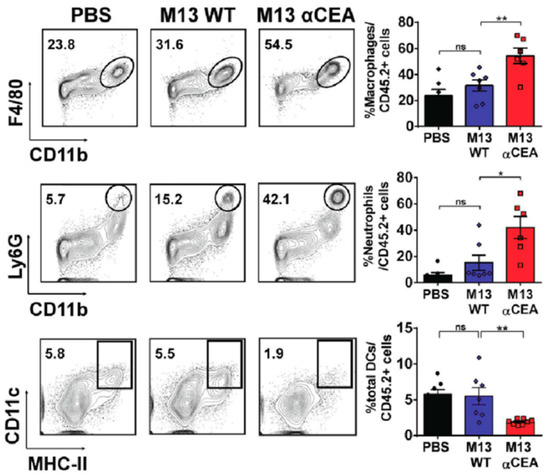 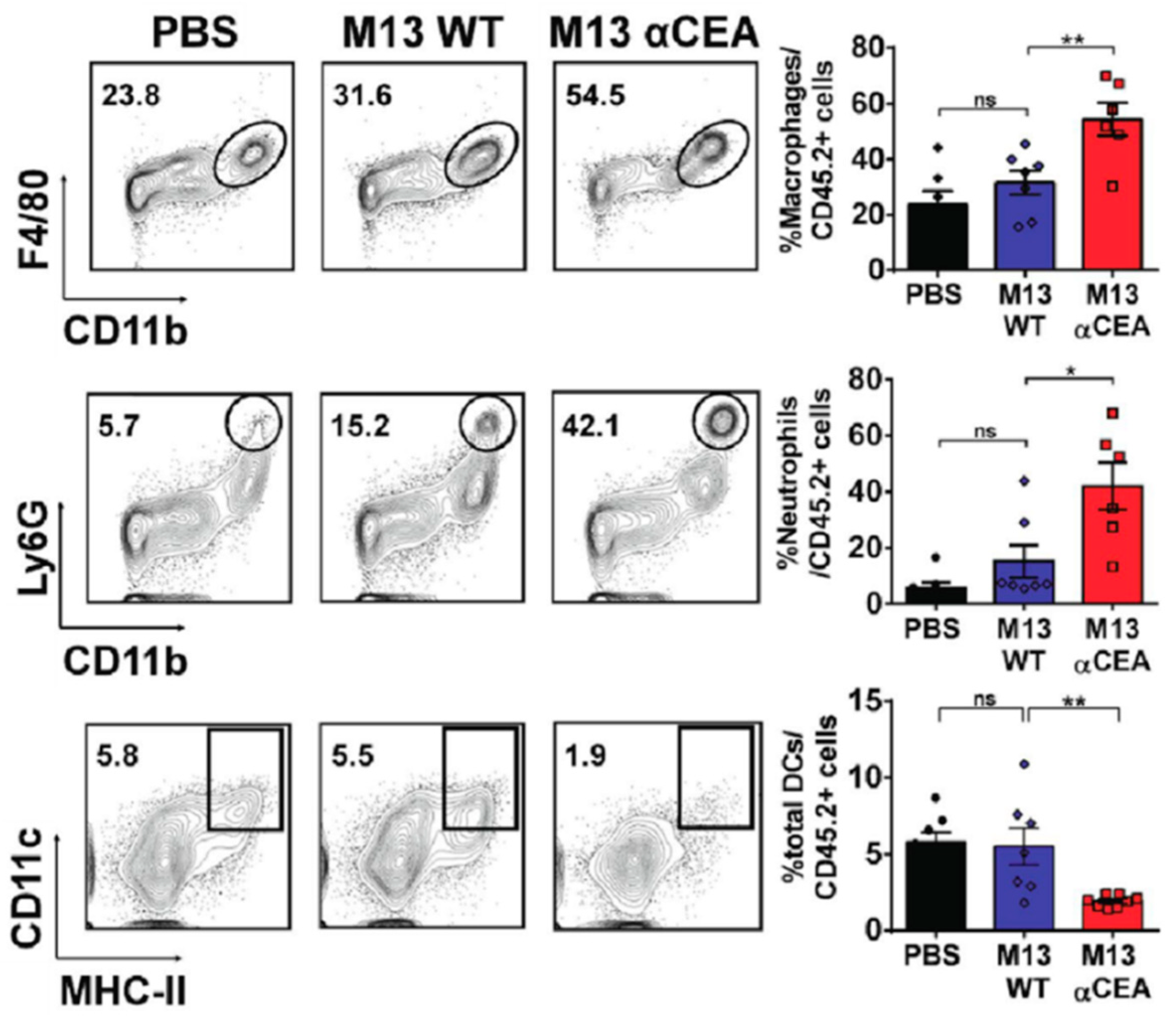 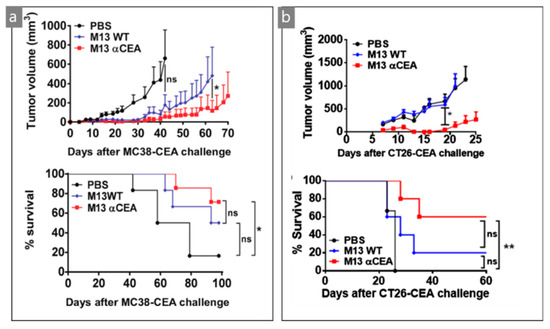 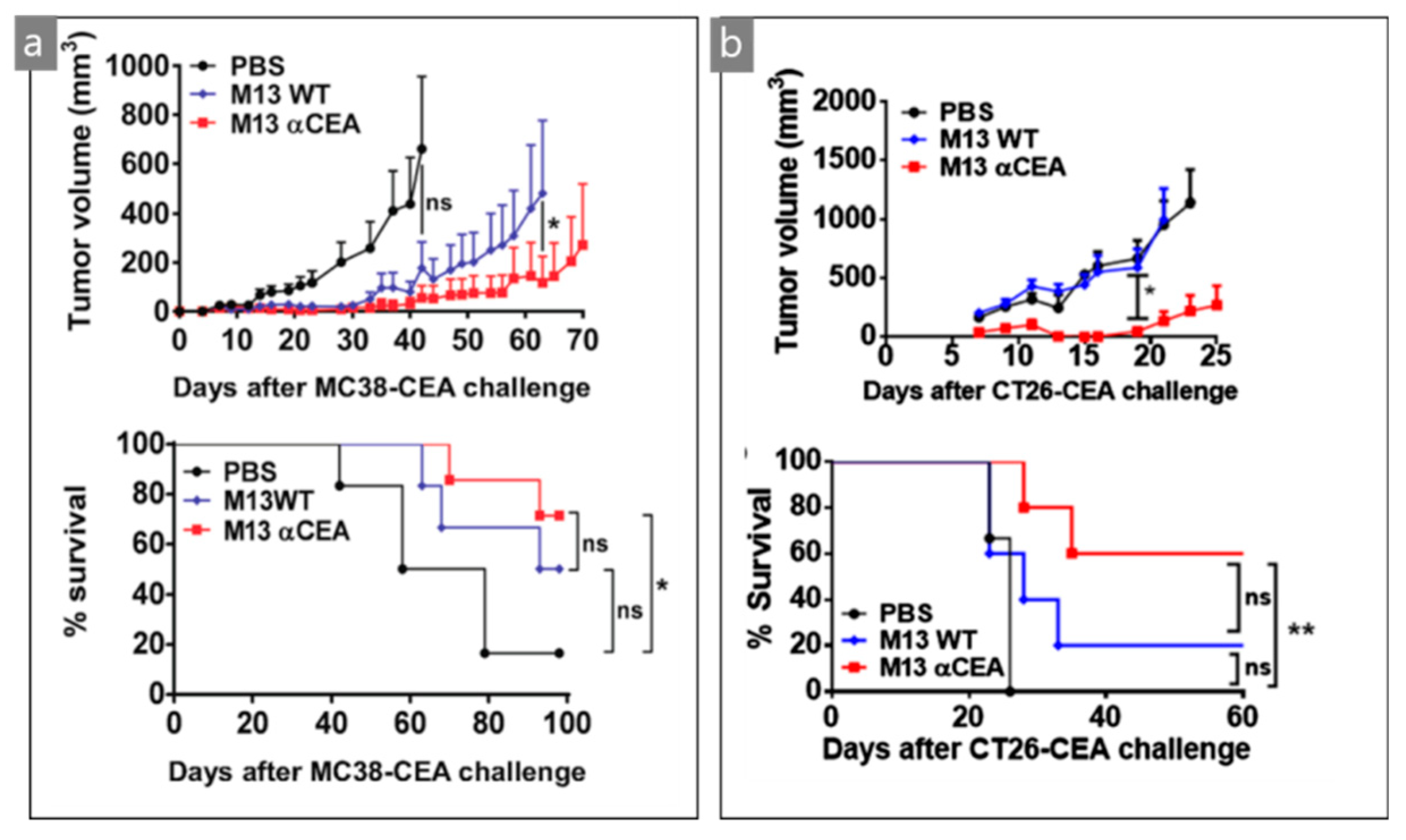 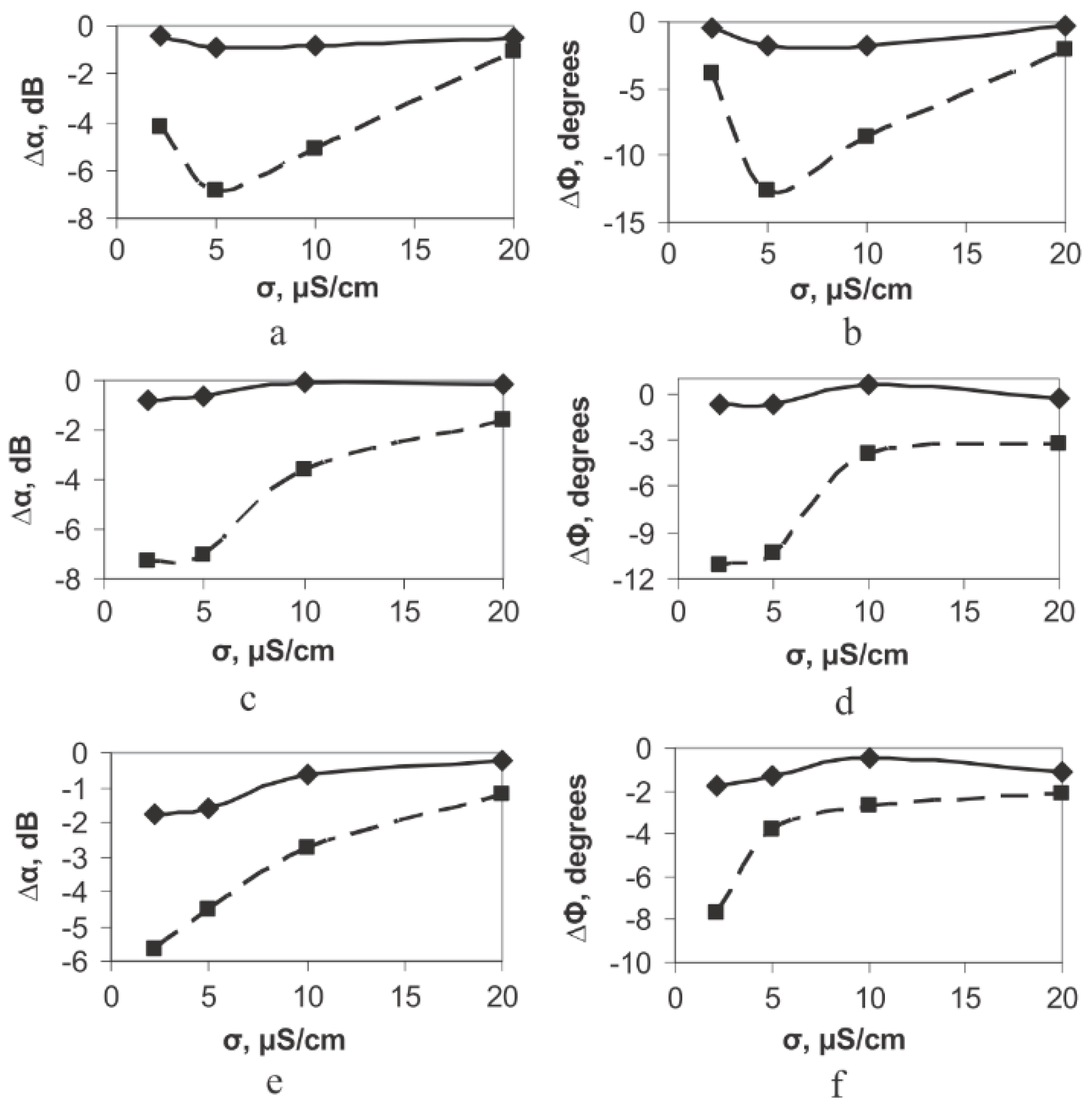 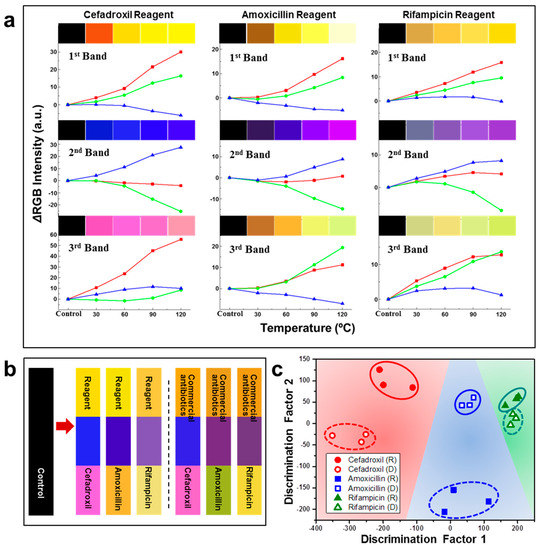 Table 1. Biosensor applications of M13 bacteriophages.
Table 1. Biosensor applications of M13 bacteriophages.
© 2019 by the authors. Licensee MDPI, Basel, Switzerland. This article is an open access article distributed under the terms and conditions of the Creative Commons Attribution (CC BY) license (http://creativecommons.org/licenses/by/4.0/).
We use cookies on our website to ensure you get the best experience. Read more about our cookies here.
Accept
We have just recently launched a new version of our website. Help us to further improve by taking part in this short 5 minute survey here. here.
Never show this again