The specific delivery of messenger RNA (mRNA) is an excellent alternative to plasmid DNA, due to the latter’s potential risk for random integration into the host genome. In this study, we propose the use of specially tailored polyplex nanomicelles for the intravenous delivery of mRNA into the brain of mice. In brief, along the backbone of a polyaspartamide polymer that is terminated with a 42k Polyethylene glycol chain (PEG), aminoethylene-repeating groups (two, three, and four units, respectively) were conjugated to side-chains to promote electrostatic interactions with mRNA. This structural configuration would ultimately condense into a polyplex nanomicelle ranging between 24 and 34 nm, as was confirmed by transmission electron microscopy (TEM) and dynamic light scattering (DLS) while the chemistry of the synthesis was validated through NMR analysis. Subsequently, we hypothesized an important correlation pertaining to the role of hydrogen bonding between the interaction of polyamine and mRNA in due course. As a proof of concept, we encapsulated the luciferase (Luc2) mRNA as a reporter gene through in vitro transcription (IVT) and subsequently infused the polyplex nanomicelles into mouse brains via an intracerebroventricular (ICV) injection to bypass the blood–brain barriers (BBB). Data revealed that PEGylated polyplex nanomicelles possessing four repeating units of aminoethylene groups had exhibited the best Luc2 mRNA delivery efficiency with no significant immune response registered. View Full-Text
Keywords: mRNA; polyplex nanomicelle; intracerebroventricular injection; aminoethylene side chains mRNA; polyplex nanomicelle; intracerebroventricular injection; aminoethylene side chains
►▼ Show Figures 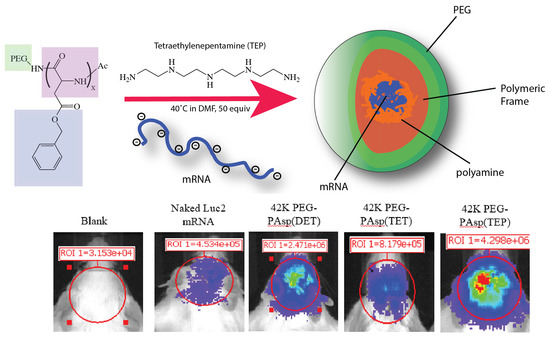