An appropriate writing field is very important for magnetic storage application of L10 FePt nanocomposite thin films. However, the applications of pure L10 FePt are limited due to its large coercivity. In this paper, the ratios of L10 and non-L10 phase FePt alloy nanoparticles in FePt/MgO (100) nanocomposite thin films were successfully tuned by pulsed laser deposition method. By adjusting the pulsed laser energy density from 3 to 7 J/cm2, the ordering parameter initially increased, and then decreased. The highest ordering parameter of 0.9 was obtained at the pulsed laser energy density of 5 J/cm2. At this maximum value, the sample had the least amount of the soft magnetic phase of almost 0%, as analyzed by a magnetic susceptibility study. The saturation magnetization decreased with the increase in the content of soft magnetic phase. Therefore, the magnetic properties of FePt nanocomposite thin films can be controlled, which would be beneficial for the magnetic applications of these thin films.
Keywords: pulse laser deposition; FePt alloy; magnetic phase pulse laser deposition; FePt alloy; magnetic phase

The face-centered-tetragonal (fct) L10-FePt alloy with large magnetocrystalline anisotropy content was regarded as the most promising material for ultra high density perpendicular magnetic recording [1,2]. However, the high coercivity of FePt greatly exceeds the writing field of available heads, which is limited by the head materials [3]. Thus, it is necessary to find a way to reduce the writing field. Exchange coupling between hard magnetic and soft magnetic phase has been proposed to solve this problem. In order to realize the exchange coupling in materials, two or more phases are necessary in the composite [4,5,6].
Furthermore, Fe-rich Fe3Pt, Pt-rich FePt3 or even disordered face-centered cubic (fcc) alloys can exhibit valuable magnetic properties [7,8,9]. Therefore, combing these materials with L10 FePt has attracted the attention of researchers in the past few years [10,11,12,13]. Sun’s group [11] used the reduction of platinum acetylacetonate and decomposition of iron pentacarbonyl in the presence of oleic acid and oleyl amine stabilizers to synthesize FePt alloy with different Pt concentrations, and studied the relationship between coercivity and Pt concentration. Lin [12] fabricated nanocomposite FePt-FePt3films by annealing the (Pt/Fe)10 multilayer film, and focused on the influence of annealing temperature. Suber [13] systemically studied interactions between hard and soft magnetic phases by thermal treatment of core-shell FePt (Ag)@Fe3O4. However, most of the methods to prepare FePt exchange coupling materials involve chemical synthesis, which is expensive and cannot precisely control the proportion of the components. Moreover, the annealing process, which is required for the formation of L10 phase, will lead to undesired particle agglomeration, giving rise to clusters of individual particles [14,15,16]. Since pulse laser deposition (PLD) has the advantages of fast growth rate and easily adjustable process parameters, the prepared samples are free of impurities [17]. Therefore, PLD can be developed as a way to fabricate FePt alloy with different component proportions. Furthermore, compared with other chemical synthesis methods, it is easy to embed FePt nanoparticles in a matrix by PLD method, which can effectively prevent the agglomeration of FePt particles [18].
In this work, FePt nanoparticles with different proportions of Pt and Fe were embedded in epitaxial MgO by a PLD method. The ratio of Pt and Fe was confirmed by X-ray photoelectron spectroscopy (XPS). X-ray diffractometer (XRD), and high resolution transmission electron microscope (HRTEM) equipped with an energy dispersive X-ray detector (EDX) were used to analyze the structure of samples with different components. The magnetic properties were measured by superconducting quantum interference device (SQUID). The influence of the pulsed laser energy density of PLD on the structure and magnetic properties of samples was studied.

FePt/MgO nanocomposite films were grown on MgO (100) substrate by pulsed laser deposition (PLD), which equipped a KrF excimer laser (Anhui Institute of Optics and Fine Mechanics (Hefei, China)) with a wavelength of 248 nm and pulse width of 25 ns. The pure MgO target (purity 99.99%) and an alloy target with a composition of Fe50Pt50 were used to fabricate the FePt/MgO nanocomposite films under an ultrahigh-vacuum (UHV) system. Before the fabrication of samples, the substrate was heated and degassed for 3 h at 1033 K. The MgO buffer layer was subsequently epitaxially grown on the substrate. Afterwards, the FePt layer of about 6 nm was grown on MgO buffer layer. Subsequently, MgO protective layers were deposited onto the sample. The sample was annealed for about 20 min after the deposition of every MgO layer. The pulsed laser energy density for the growth of MgO was 4 J/cm2. For fabricating FePt, the laser energy density was varied from 3, 4, 5, 6 and 7 J/cm2, and the samples were labelled as samples 1#, 2#, 3#, 4# and 5#, respectively. Finally, all of the as-deposited FePt/MgO nanocomposite films were post-annealed at 1173 K for 4 h under a Ar + H2 (5%) flowing gas atmosphere. The experimental parameters for fabricating the FePt/MgO nanocomposite films are listed in Table 1.
XPS analysis (Mg Kα, 1253.6 eV, ThermoFisher Scientific (Waltham, MA, USA)) and EDX (JEOL, Tokyo, Japan) was employed to determine the chemical composition and the proportions of Fe and Pt, and the XPS spectra were fitted using the XPSPEAK41 program and Shirley-type background. The phase composition of the films were identified using XRD (θ–2θ (symmetric reflection) diffraction geometry, Rigaku, Tokyo, Japan) with CuKα radiation of 1.5418 Å wavelength and HRTEM (JEOL, Tokyo, Japan). The magnetic properties at room temperature were measured by a SQUID (Quantum Design (SanDiego, CA, USA)) in the range of −5 to 5 T.

In conclusion, PLD was used to fabricate FePt alloy films with different contents of Fe and Pt. The proportion of components was controlled between Fe67Pt33 to Fe37Pt63 by adjusting the pulsed laser energy density. When the ratio of Fe and Pt was almost 1, the ordering parameter reached 0.9. Furthermore, with the increase in the content of Fe and Pt, the characteristic diffraction peak (001) of FePt shifted to lower and higher angles, respectively. The films with Fe to Pt ratio of almost showed large squareness ratio, while the slightly Pt-rich film had the largest saturation magnetization. Modifying the magnetic properties by tuning the proportion of components via PLD would be helpful for reduction of media noise in magnetic recording media.

This work was financially supported by the National Science Foundation of China (Grant No. 11404302), Laser Fusion Research center funds for young talents and the foundation of the China Academy of Engineering Physics. 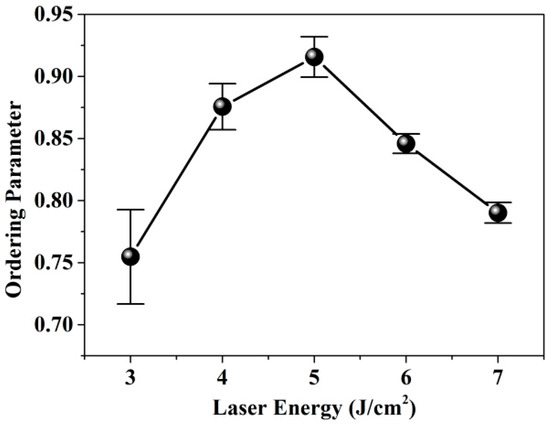 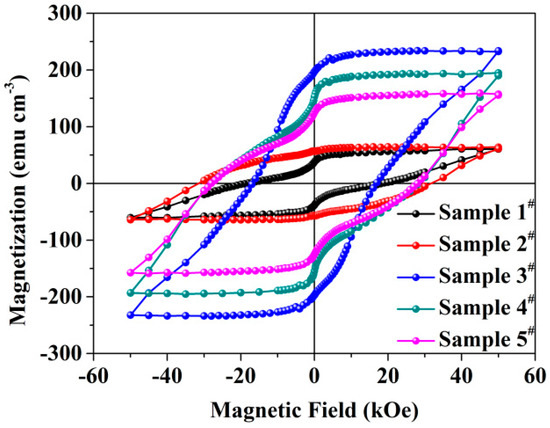 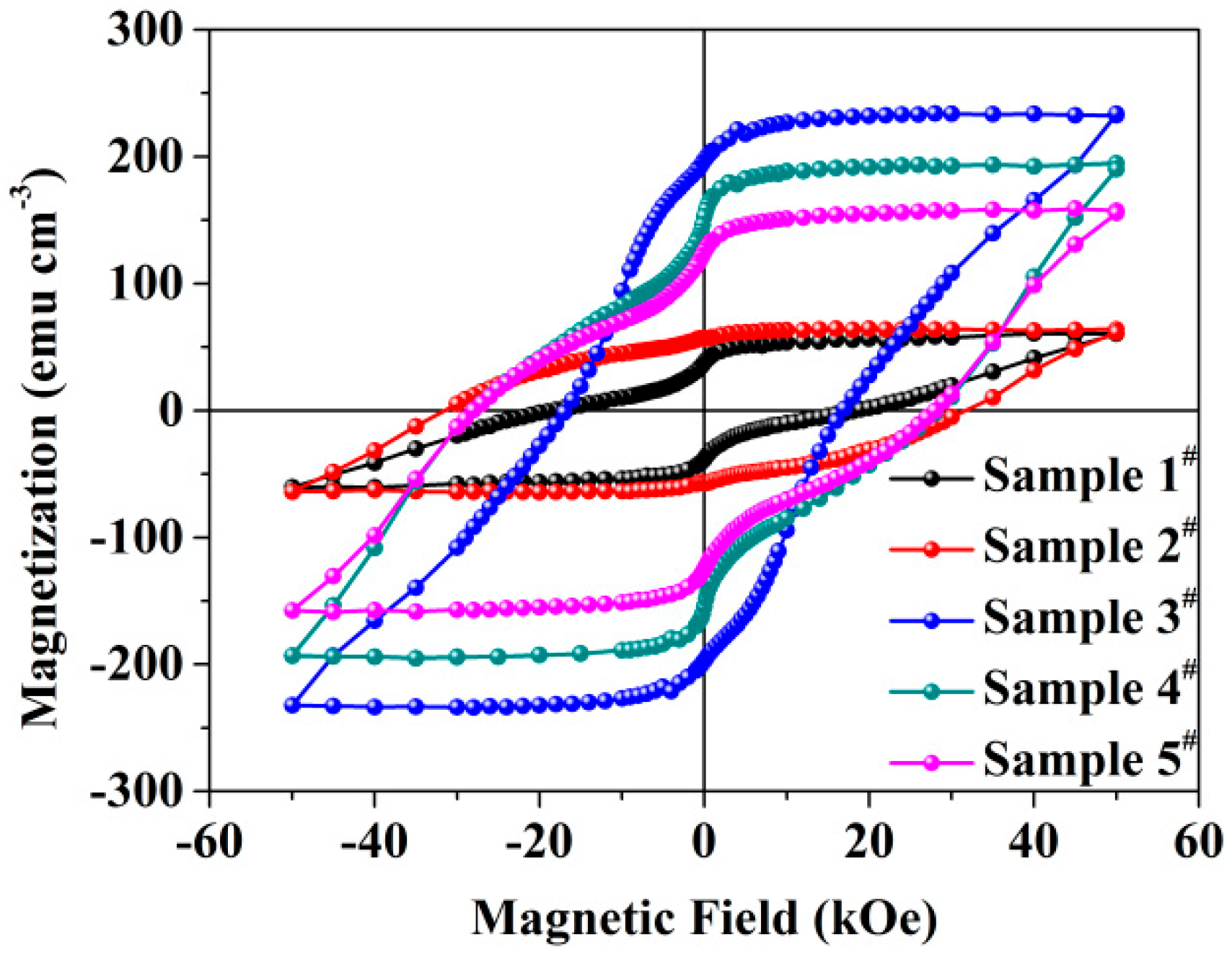 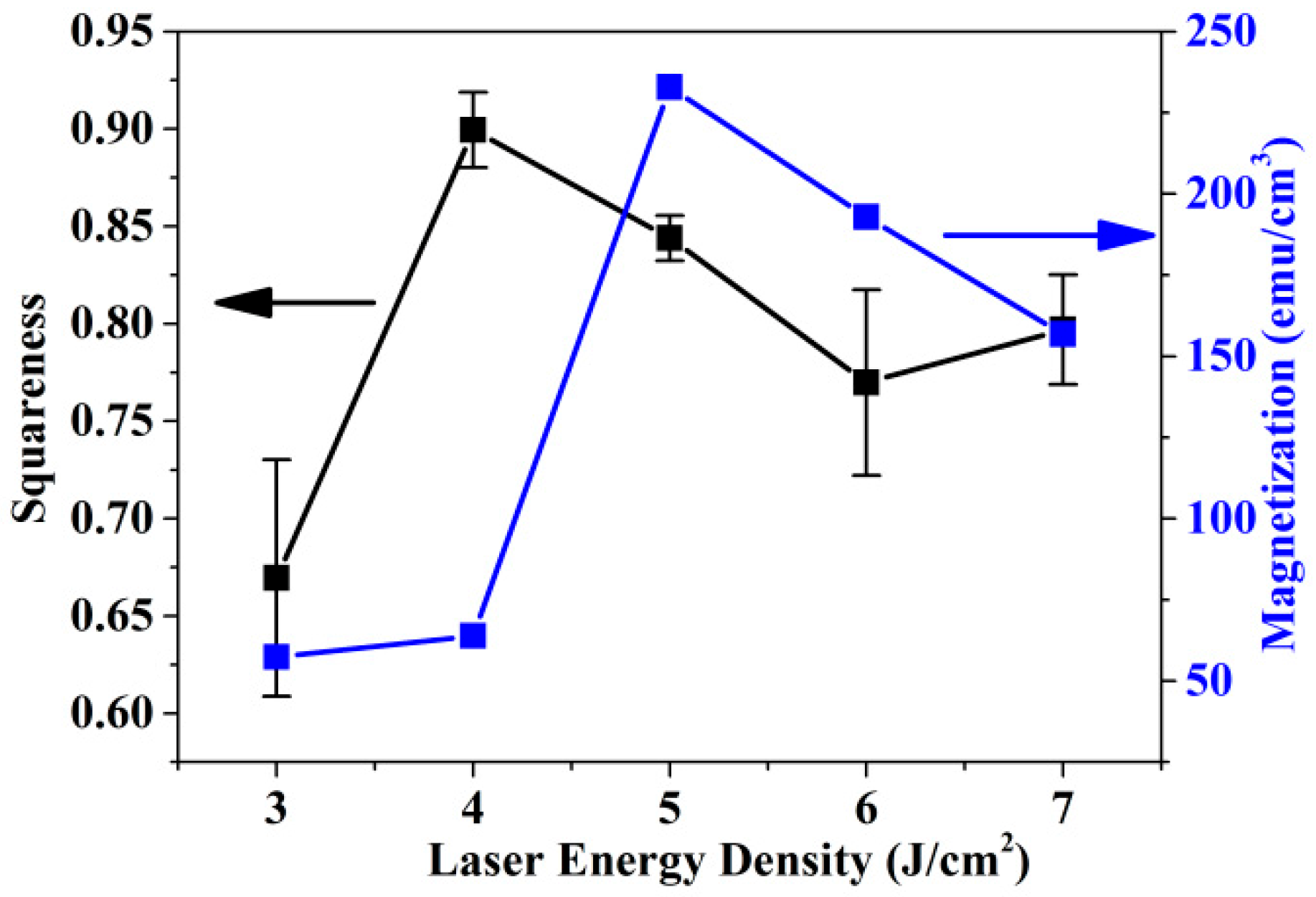 Table 1. Experimental parameters for FePt/MgO nanocomposite film fabrication.
Table 1. Experimental parameters for FePt/MgO nanocomposite film fabrication.
© 2019 by the authors. Licensee MDPI, Basel, Switzerland. This article is an open access article distributed under the terms and conditions of the Creative Commons Attribution (CC BY) license (http://creativecommons.org/licenses/by/4.0/).
We use cookies on our website to ensure you get the best experience. Read more about our cookies here.
Accept
We have just recently launched a new version of our website. Help us to further improve by taking part in this short 5 minute survey here. here.
Never show this again