A novel, simple, and highly sensitive method was developed to detect the concentration of tyrosine-derived azo dye indirectly using silver nanocubes (AgNCs) as a substrate on a super-hydrophobic silver film by surface-enhanced Raman spectroscopy (SERS). Diazotization-coupling reaction occurred between diazonium ions and the phenolic tyrosine, resulting in three new typical peaks in the SERS spectrum of the azo dye that was formed on the AgNCs, indicating strong SERS activity. Subsequently, the limit of detection of this approach was as low as 10−12 M for tyrosine. Moreover, the SERS intensities of the three typical SERS signals of the analyte were linearly correlated with the logarithm of concentration of the Tyrosine. The proposed method shows great potential for tyrosine detection in the urine samples of normal humans. View Full-Text
Keywords: silver nanocubes; diazotization-coupling reaction; Tyrosine; Surface enhanced Raman scattering silver nanocubes; diazotization-coupling reaction; Tyrosine; Surface enhanced Raman scattering
►▼ Show Figures 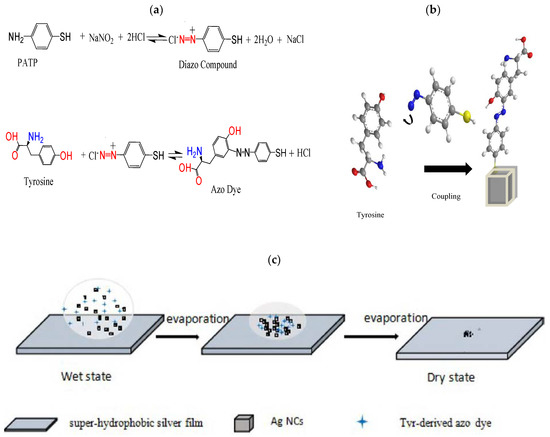