Chitosan-MgO Nanocomposite: One Pot Preparation and Its Utility as an Ecofriendly Biocatalyst in the Synthesis of Thiazoles and [1,3,4]thiadiazoles
Next Article in Special Issue

The potential agricultural use of metal nanoparticles (NPs) for slow-release micronutrient fertilizers is beginning to be investigated by both industry and regulatory agencies. However, the impact of such NPs on soil biogeochemical cycles is not clearly understood. In this study, the impact of commercially-available copper NPs on soil nitrification kinetics was investigated via batch experiments. The X-ray absorption near edge structure spectroscopy analysis showed that the NPs readily oxidized to Cu(II) and were strongly retained in soils with minimum dissolution (<1% of total mass). The Cu2+ (aq) at 1 mg/L showed a beneficial effect on the nitrification similar to the control: an approximately 9% increase in the average rate of nitrification kinetics (Vmax). However Vmax was negatively impacted by ionic Cu at 10 to 100 mg/L and CuNP at 1 to 100 mg/L. The copper toxicity of soil nitrifiers seems to be critical in the soil nitrification processes. In the CuNP treatment, the suppressed nitrification kinetics was observed at 1 to 100 mg/kg and the effect was concentration dependent at ≥10 mg/L. The reaction products as the results of surface oxidation such as the release of ionic Cu seem to play an important role in suppressing the nitrification process. Considering the potential use of copper NPs as a slow-release micronutrient fertilizer, further studies are needed in heterogeneous soil systems. View Full-Text
Keywords: copper nanoparticles; nanofertilizer; soil; nitrification; nitrification kinetics; toxicity copper nanoparticles; nanofertilizer; soil; nitrification; nitrification kinetics; toxicity
►▼ Show Figures 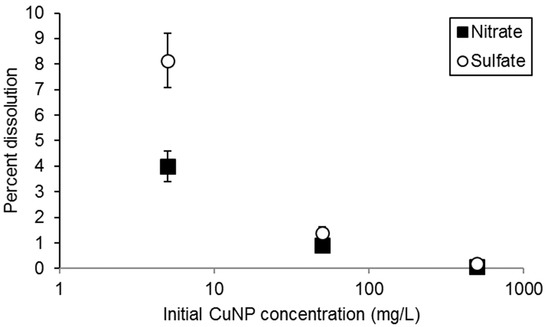