:
The development of portable biosening devices for the detection of biological entities such as biomolecules, pathogens, and cells has become extremely significant over the past years. Scientific research, driven by the promise for miniaturization and integration of complex laboratory equipment on inexpensive, reliable, and accurate devices, has successfully shifted several analytical and diagnostic methods to the submillimeter scale. The miniaturization process was made possible with the birth of microfluidics, a technology that could confine, manipulate, and mix very small volumes of liquids on devices integrated on standard silicon technology chips. Such devices are then directly translating the presence of these entities into an electronic signal that can be read out with a portable instrumentation. For the aforementioned tasks, the use of magnetic markers (magnetic particles—MPs—functionalized with ligands) in combination with the application of magnetic fields is being strongly investigated by research groups worldwide. The greatest merits of using magnetic fields are that they can be applied either externally or from integrated microconductors and they can be well-tuned by adjusting the applied current on the microconductors. Moreover, the magnetic markers can be manipulated inside microfluidic channels by high gradient magnetic fields that can in turn be detected by magnetic sensors. All the above make this technology an ideal candidate for the development of such microfluidic biosensors. In this review, focus is given only to very recent advances in biosensors that use microfluidics in combination with magnetic sensors and magnetic markers/nanoparticles.
Keywords:
microfluidics; magnetic markers; magnetic biosensors

In conclusion, microfluidics can be the foundation that leads to the development of new devices to be applied in the fields of life sciences, biotechnology, pharmaceuticals, and agriculture. The fact that many chemical, biological, and biophysical processes and tasks are carried out in liquid environments allows the employment of such microfluidic platforms for biomedical analysis in a portable, reliable, and simple manner.
The presented biosensing systems offer compact, highly-sensitive, and cost-effective solutions for biomedical diagnostics. Through our study, it was concluded that several novel detection mechanisms combining magnetic markers, magnetic sensors, and microfluidics are continuously emerging. Therefore, magnetic biosensors could in fact become competitive counterparts and even replace in the future the currently available optical and fluorescence detection systems, while maintaining high specificity, sensitivity, and fast readout times. Compared to such standard technologies, magnetic microfluidic biosensors directly translate the presence of a biological entity into an electrical signal, thus providing a fully electronic readout and enabling the future development of point-of-care devices.

Part of this work was financed by the Austrian Science Fund (FWF) with Project Number: P28544-N30. The authors apologize to any colleagues worldwide that have done excellent work in this field, but might not have been included due to space limitations. 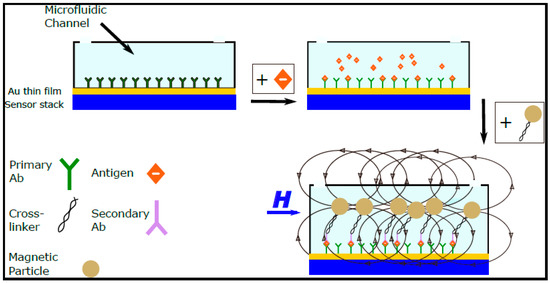