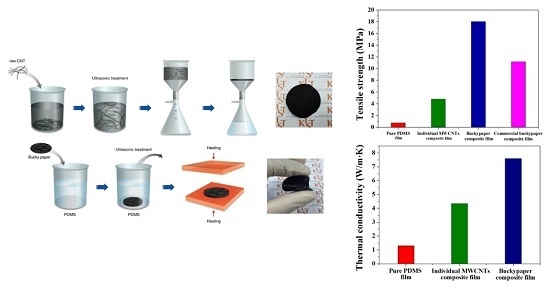 Since the first discovery of carbon nanotubes (CNTs) nearly two decades ago by Iijima [1], their excellent electrical, thermal and mechanical properties have been widely reported [1,2,3,4,5]. In particular, CNTs have been demonstrated to be nanomaterials with high thermal conductivity of 1950–5000 W/m·K at room temperature [1,6]. However, when typical methods of fabricating composites filled with CNTs are used, it has proven difficult to obtain the expected physical properties because of the non-uniform dispersion of the CNTs. This poor dispersion results from CNT agglomeration due to strong van der Waals forces and the extra-large surface areas of the CNTs. As methods to overcome the problem, various studies have investigated chemically modifying the CNT interface [7,8], or using continuous CNT fibers (yarns) [9,10,11] or CNT films (mats, known as buckypapers) [1,12,13].
Buckypaper is known for its outstanding electrical conductivity of 104–107 S/m [14,15], thermal conductivity of 83 W/m·K [16] and mechanical modulus of 0.6–4.2 GPa [17]. Furthermore, the material is advantageous for controlling both the dispersion and high loading of CNT fillers within composites [12,18]. The various buckypaper production methods can be divided into solution strategies, such as vacuum filtration [18], the spray method [19], the casting method [20], and the printing method [21], and dry strategies that do not use a solvent, such as the floating catalyst chemical vapor deposition process [22] and drying spinning [23]. Buckypaper can be used in various fields, such as filtration and distillation membranes [24], actuators [25] and supercapacitors [26], as well as thermally and electrically conductive materials [27].
The motivation of this study is to investigate the effect of incorporating individual MWCNTs or continuous MWCNT buckypaper on the thermal and mechanical properties of composite films. As shown in Figure 1, a two-step process involving buckypaper preparation via low-cost vacuum filtration and composite film fabrication based on the dipping method is proposed. Composite films filled with the individual MWCNTs, and with infiltrated MWCNT buckypaper, were fabricated by the proposed process. We evaluated the thermal and mechanical properties of the composite films and investigated the structure-property relationship resulting from forming the continuous MWCNTs.

Preparing a well-dispersed MWCNT aqueous suspension is important for obtaining excellent buckypaper structure and properties because the buckypapers are an entangled network structure of MWCNTs, fabricated by suspension filtration [18]. MWCNTs were dried at 100 °C for 12 h to remove moisture because it affects the dispersion of the MWCNTs. After loading the MWCNTs into a 50 mL dispersion medium according to various MWCNT types and contents, the MWCNTs were dispersed using a bath-type sonicator (JAC-3010, KODO, Hwaseong, Korea) for 20 min. Various buckypapers were produced by the vacuum filtration as shown in Figure 1 in order to investigate the effect of the MWCNT lengths, the MWCNT contents in suspension, sonication time, types of dispersion medium and types of filter on the resulting buckypaper structure, as listed in Table 1. After the filtration, buckypaper was peeled from the filter and dried overnight in a vacuum oven at 120 °C.

Since residual moisture interferes with silicon resin impregnation, the as-received MWCNTs and fabricated buckypaper were dried at 120 °C for 12 h in a vacuum oven. To fabricate fully impregnated PDMS composite films, the dried MWCNTs or buckypaper was immersed in the liquid phase silicon matrix mixed the liquid pre-polymer and curing agent at a ratio of 10:1 and then sonicated for 1 h using a bath-type sonicator (JAC-3010, KODO, Hwaseong, Korea). After the sonication, the PDMS composites filled with the fully dispersed MWCNTs or buckypaper were heated by a heating press (Dae Heung Science Co., Incheon, Korea) at 130 °C and 800 psi. To prepare a control sample, PDMS film without any fillers was cured under the same processing procedure and conditions. Thickness of PDMS, MWCNTs filled composite and the optimized buckypaper, sample (l) in Table 1, filled composite film was 150 μm.

The changes in the surface functional groups on the surface of the MWCNTs and buckypaper were analyzed by a FT-IR spectroscope (Nicolet iS10, Thermo Fisher Scientific Inc., Waltham, MA, USA). Specimens were ground with dried spectroscopic grade KBr powder and the mixture was compressed into pellets for FT-IR measurements. The FT-IR spectra were obtained in the range of 500–4000 cm−1 at a resolution of 16 cm−1.

XPS (K-Alpha, Thermo Fisher Scientific Inc., Waltham, MA, USA) was performed to determine the chemical compositions of the MWCNTs and buckypaper surfaces. The instrument was equipped with a monochromatic Al kα source and the measurements were performed under a pressure of Torr.

The thermal conductivity of the composites was measured under normal temperature and pressure conditions using a conductivity-measuring instrument (TPS 2500 S, Hot Disk ab, Gothenburg, Sweden), according to the ISO 22007-2 standard. The sensor used in this study consisted of a double spiral of thin nickel wire and served as a continuous plane heat source. The sensor induced a temperature rise (ΔT) by supplying a constant amount of power (P) and, at the same time, measured the temperature change using a variation in sensor resistance. The thermal conductivity of the samples was determined using the Fourier equation for heat conduction based on the supplied power and induced temperature change.

The transient temperature response of the fabricated composite films was evaluated using an infrared camera (FLIR T420, Wilsonville, OR, USA). The composite film specimens, at a constant temperature of 100 °C, were placed on a metal plate at room temperature. Thermal images of the specimens were recorded during 20 s.

The tensile strength of the fabricated films (3 mm × 30 mm) were tested with a Universal testing machine (UTM, UTM 5567A, Instron, Norwood, IL, USA), which was operated at a tension speed of 0.3 mm/min at room temperature.

The buckypaper fabrication conditions and photo images are listed in Table 1 and shown in Figure 3, respectively. It was confirmed in Figure 3a–d that when longer MWCNTs were used, more effective contact between the MWCNTs occurred, resulting in closed-packed buckypaper [12]. When comparing the tensile strength of the fabricated buckypapers listed in Table 1, the optimum condition for fabrication of the buckypapers was 50-mg-long- MWCNTs in 50 mL DMF with 20 min sonication using the PTFE filter. DMF is known as an effective dispersion medium for making an agglomerate-free uniform MWCNT dispersion because of good interactions between the MWCNTs and DMF in the suspension phase [33]. During suspension filtration under the optimum condition, uniformly sequenced fibrous MWCNTs formed by van der Waals forces between the tubes were identified [34].
The chemical surface properties of the as-received MWCNTs and the fabricated buckypaper are shown in Figure 4. As shown in the FT-IR spectra of the as-received MWCNTs and the buckypaper of Figure 4a, similar peaks at 3440 cm−1 (O–H), 2924 and 2854 cm−1 (C–H) and 1634 cm−1 (C=C) were observed. The pristine MWCNTs and buckypaper fabricated under the optimum condition using DMF solvent had a similar atomic percentage of carbon and oxygen, as confirmed in the XPS spectra of Figure 4b and Table 2. In particular, the N1s peak which can be found by reacting with the DMF solvent was not observed in the XPS survey-scan spectra of the buckypaper [35]. In the Raman spectra shown in Figure 4c, a similar intensity ratio of ID/IG was observed for both the as-received MWCNTs and the buckypaper. The ID/IG ratio indicates the defect level of the carbon materials because the D-band is a disorder-induced feature that arises from a double-resonance Raman scattering process due to non-zero-center phonon modes, which are typically attributed to the presence of amorphous or disordered carbon atoms, and the G band results from in-plane tangential stretching of the carbon-carbon bonds in the graphene sheets [36]. Therefore, there were no apparent structural or chemical changes during the buckypaper fabrication using DMF solvent.

This study was supported by Korea Institute of Science and Technology (KIST) Institutional Program and the Technological innovation R & D program of SMBA (S2394169). 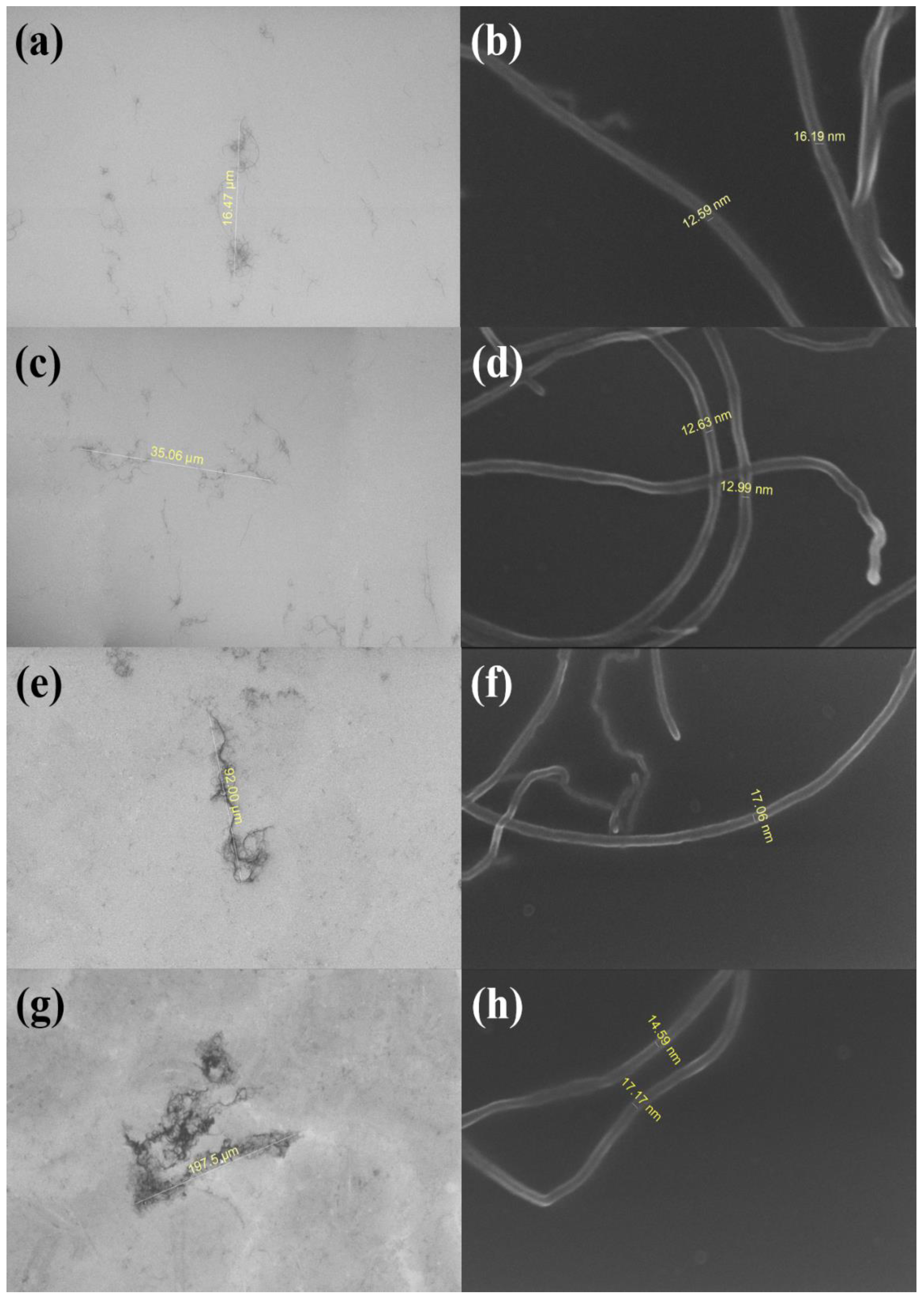