:
The use of Ta/TaN barrier bilayer systems in electronic applications has been ubiquitous over the last decade. Alternative materials such as Co-W or Ru-W alloys have gathered interest as possible replacements due to their conjugation of favourable electrical properties and barrier layer efficiency at reduced thicknesses while enabling seedless Cu electroplating. The microstructure, morphology, and electrical properties of Cu films directly electrodeposited onto Co-W or Ru-W are important to assess, concomitant with their ability to withstand the electroplating baths/conditions. This work investigates the effects of the current application method and pH value of the electroplating solution on the electrocrystallisation behaviour of Cu deposited onto a Co-W barrier layer. The film structure, morphology, and chemical composition were studied by X-ray diffraction, scanning electron microscopy and atomic force microscopy, as well as photoelectron spectroscopy. The results show that the electrolyte solution at pH 1.8 is incapable of creating a compact Cu film over the Co-W layer in either pulsed or direct-current modes. At higher pH, a continuous film is formed. A mechanism is proposed for the nucleation and growth of Cu on Co-W, where a balance between Cu nucleation, growth, and preferential Co dissolution dictates the substrate area coverage and compactness of the electrodeposited films.
Keywords:
seedless electroplating; Cu; Co-W; interconnect; acidic

Following the trend established by Moore’s Law, more transistors are being packed in a single chip as the dimensions continue to downscale. As of 2020, the transistor count is on the order of several tens of billions in CPU and GPU systems. This continuous miniaturisation makes the massive spread of electronic devices, computers, smartphones, and wearables possible, which is also followed by great manufacturing challenges, where conventional processes and materials are reaching their usability limits and thus requiring either an improvement or replacement. In this regard, copper interconnects, which act as electrical paths in integrated circuits, have also been downscaled, thereby experiencing a reduction in width and thickness. Yet, the process of metallisation of these copper interconnects requires a diffusion barrier layer on the sidewalls/bottoms of vias and lines to prevent Cu atoms from diffusing into the surrounding dielectrics. Currently, a TaN diffusion barrier layer and a Ta adhesion layer are employed to improve the bonding between Cu and TaN. Although Ta/TaN is effective as a diffusion barrier system, it increases the global interconnect resistivity as the miniaturisation progresses further, ultimately limiting the performance of the integrated circuits. Furthermore, Cu dewetting and electromigration—phenomena related to the adhesion strength between Cu and Ta [1,2]—are becoming more prominent, hence limiting the interconnect reliability [3,4]. In addition, Ta/TaN requires a Cu seed layer on top before the electrolytic deposition process is initiated in order to enable adequate via and line filling. Uniform Cu-seed/Ta/TaN layers have thus become increasingly more difficult to deposit over increasingly narrow vias using conventional fabrication techniques.
Alternative barrier layers have been considered to replace Ta/TaN, such as Ru- and Co-based binary systems—e.g., Ru-W, Ru-Mn, and Co-W [5,6,7]. The Co-W system is an interesting candidate as a novel barrier material due to its electrical and thermal properties. Co exhibits a relatively low electrical resistivity in a wide range of thicknesses [8,9,10], whereas W enhances the diffusion barrier properties [11], preventing Cu from diffusing into the dielectrics. In [11], it was shown that CVD-Co-W (with 20 at% W) displays equivalent diffusion barrier properties to PVD-TaN. Additionally, the interface adhesion strength in Cu/Co-W is higher than in Cu/Ta [12,13], favouring lower Cu diffusion along the interface Cu/barrier and subsequently improving the electromigration lifetime [14]. From a manufacturing point of view, Co-W is an interesting alternative to Ta/TaN as well, because it can be synthesised by electrochemical routes that produce a high film uniformity and step coverage in narrow vias and lines. Additionally, Co-W can function as both a diffusion barrier and seed layer, whereupon Cu can be directly electroplated [15]. Electroless methods used for the synthesis of Co-W-based thin films have been reported in the literature [16,17,18], but the direct electroplating of Cu on Co-W-based thin films is frankly unaddressed. The feasibility of Co-W as a directly electroplatable diffusion barrier layer to interconnect metallisation depends on its capability to grow a Cu film on top, with adequate morphological and microstructural characteristics and equivalent or superior electronic performance to conventional barrier layer systems. This work proposes a method for Cu electrocrystallisation on top of Co-W thin films using conventional acidic electroplating baths, focusing on the initial stages of Cu film formation.

A ≈ 100 nm layer of SiO2 was deposited on top of a p-type boron-doped Si (100) wafer (Silicon Valley Microelectronics, Santa Clara, CA, USA) by plasma-enhanced chemical vapour deposition (PECVD) with a high radio frequency in a CVD MPX chamber (SPTS Technologies Ltd., Newport, UK). The wafer was diced into 15 mm × 15 mm substrates, whereupon Co-W films were deposited by DC magnetron sputtering in a confocal ultra-high vacuum sputtering system (Kenosistec, Binasco, Italy). Co and W were simultaneously sputtered from their respective targets (99.95%, Testbourne Ltd., Basingstoke, UK) for 600 s. Films with different W contents were deposited by applying a power bias between 40 and 100 W on the W target while keeping the Co target fixed at 40 W. The base and working pressures were 6.4 × 10−5 and 6.9 × 10−1 Pa, respectively, maintaining an Ar flux of 20 sccm into the sputtering chamber. Co-W film thickness was measured using a contact profilometry instrument (KLA-Tencor, Milpitas, CA, USA).

Cu was directly electroplated on Co-W/SiO2/Si substrates using an acidic electrolyte of 0.05 M CuSO4∙5H2O (99.995%, Sigma-Aldrich, St. Louis, MO, USA), 0.05 M H2SO4 (Honeywell/Fluka, Charlotte, NC, USA), 1 mM NaCl (Honeywell/Fluka, Charlotte, NC, USA), and 300 ppm polyethylene glycol (PEG) 600 (Fluka Chemie GmbH, Buchs, Switzerland) in double-distilled water. Electrolyte acidity was measured with a FiveEasy™ F20 digital pH meter (Mettler Toledo, Greifensee, Switzerland). Galvanostatic direct current (DC) and pulsed current (PC) plating routines were employed using a Gamry potentiostat/galvanostat Interface 1000E (Gamry Instruments, Warminster, PA, USA) with a simple two-electrode cell configuration, removing the need for the use of reference electrodes. The plating was carried out at room temperature in a 200 cm3 poly(methyl methacrylate) container without electrolyte stirring using a >99.9% pure Cu coil as the counter-electrode (anode) fixed at a ≈15 mm distance from the substrate (cathode). Prior to each plating routine, the substrates were pre-treated in a 1:20 H2SO4 solution for 60 s to remove possible oxidation present on the Co-W film surface, followed by rinsing in double-distilled water for another 60 s, both under ultrasonic agitation. The substrates were then dried by Ar blowing and masked with a polymeric film, limiting the exposed area to a circle of 0.20 cm2. After deposition, substrates were immediately removed from the electrolyte, rinsed in double-distilled water, and dried with soft Ar blowing.

2.3. Structural and Chemical Characterisation of Substrate and Cu Films

Seedless Cu electroplating was performed on top of near equimolar Co-W thin films, as candidates for diffusion barrier layers for advanced Cu interconnect metallisation, using conventional copper sulphate acidic electrolytes of pH 1.8 and a modified version with pH 3.5. The main conclusions derived from this study are:

This research was funded by Portugal 2020 through European Regional Development Fund (FEDER) in the frame of Operational Competitiveness and Internationalisation Programme (POCI) and in the scope of the project USECoIN with grant number PTDC/CTM-CTM/31953/2017. This work was also supported by FCT, through IDMEC, under LAETA project UIDB/50022/2020. 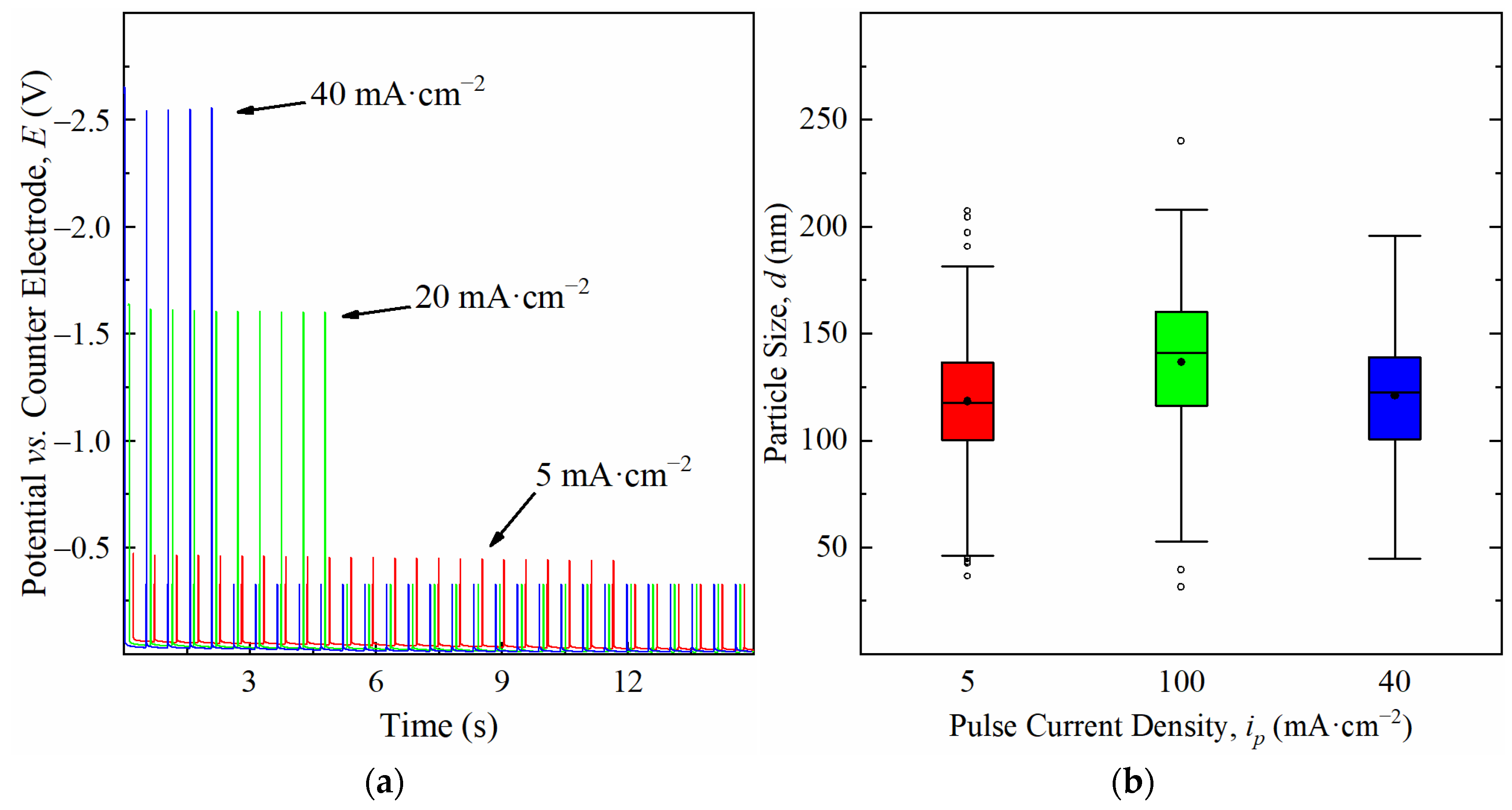 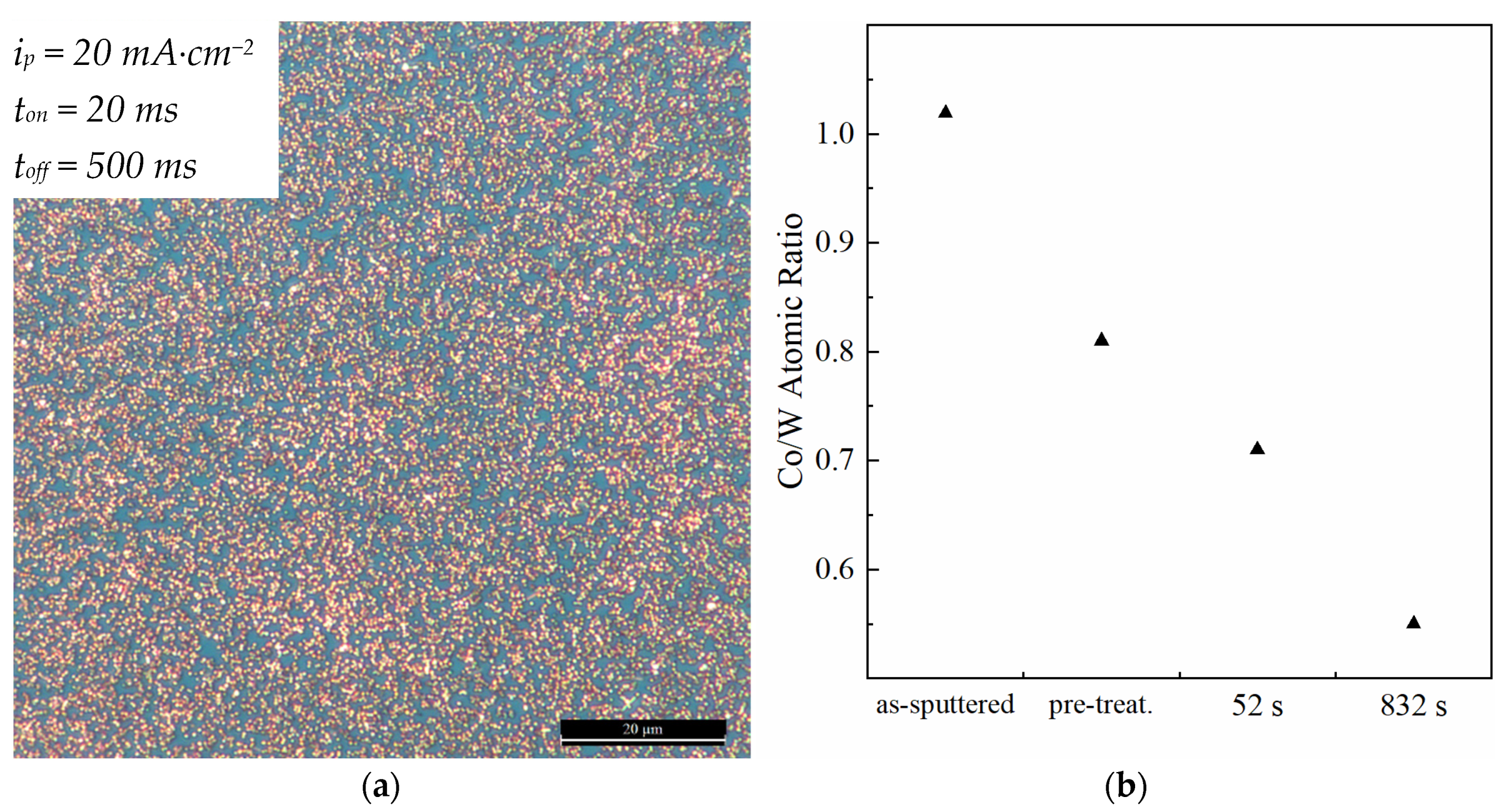 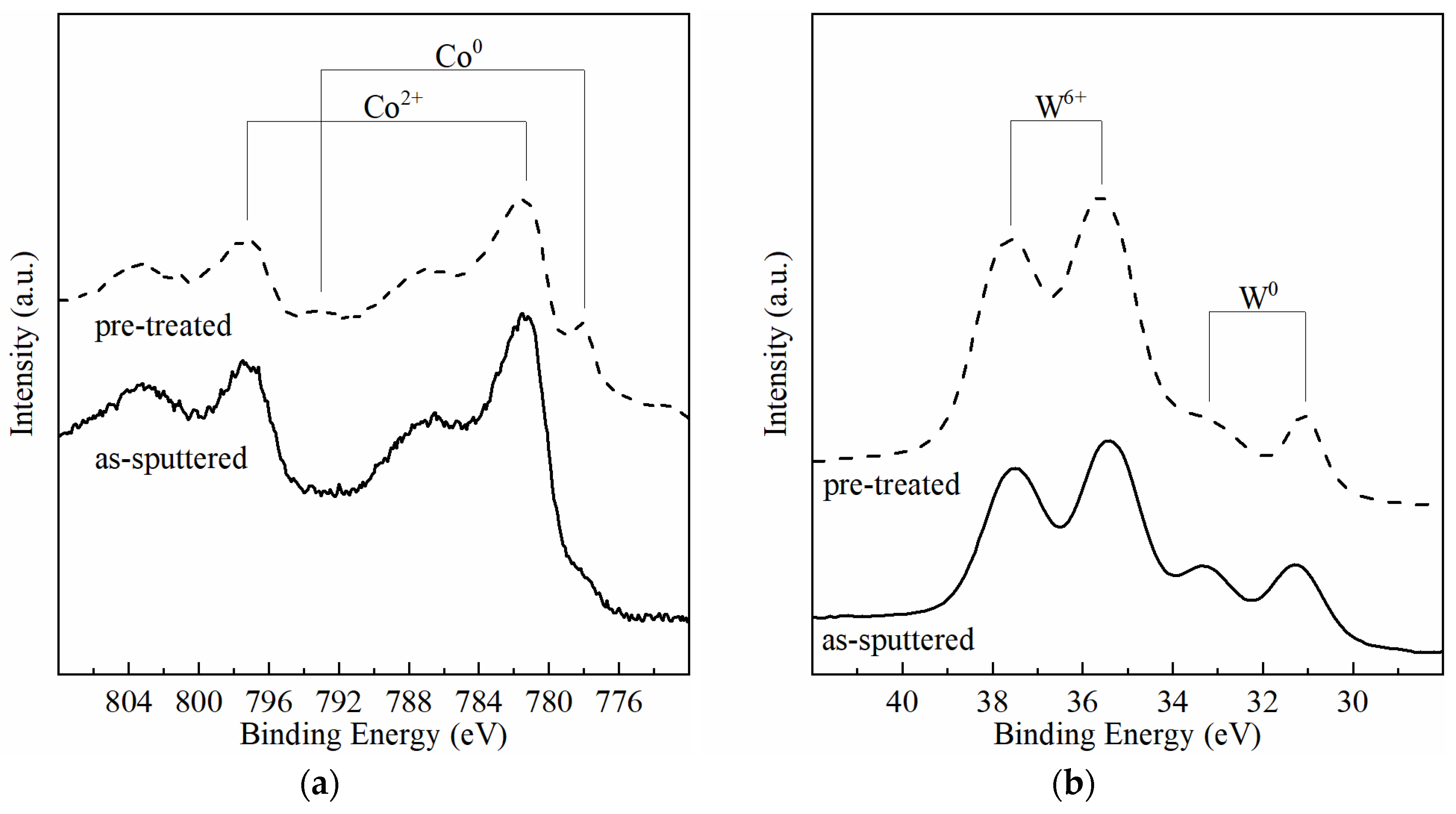 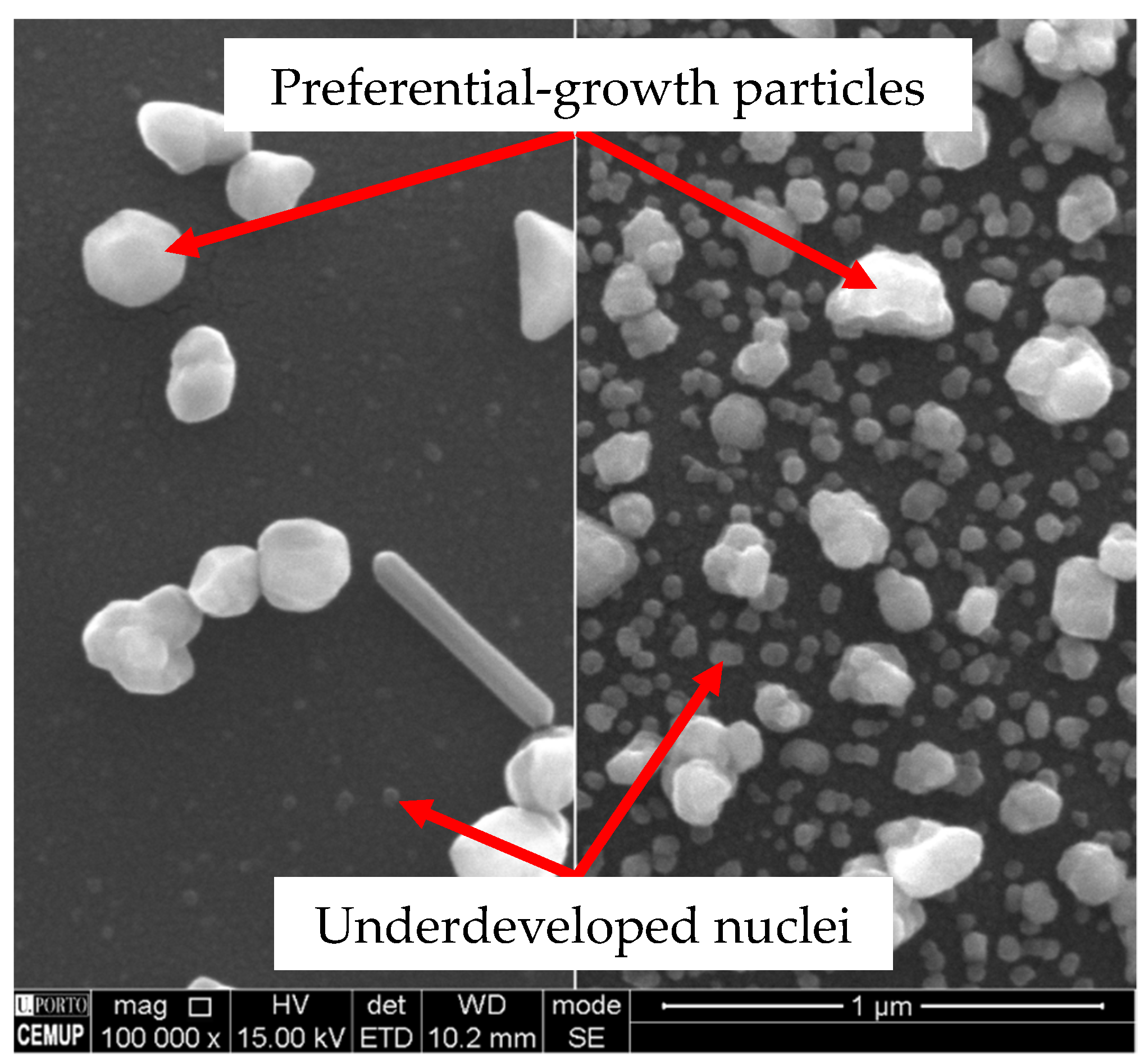 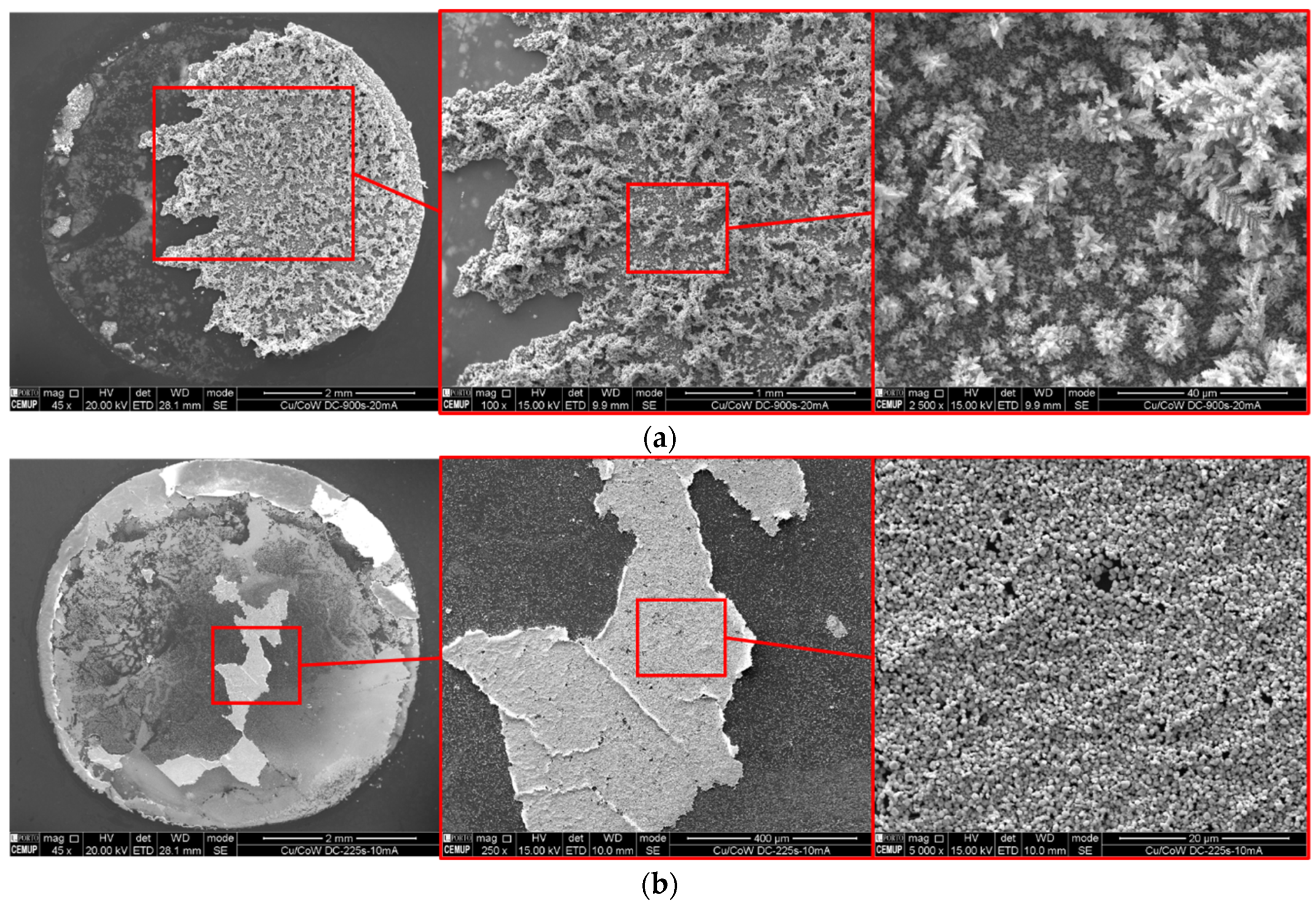 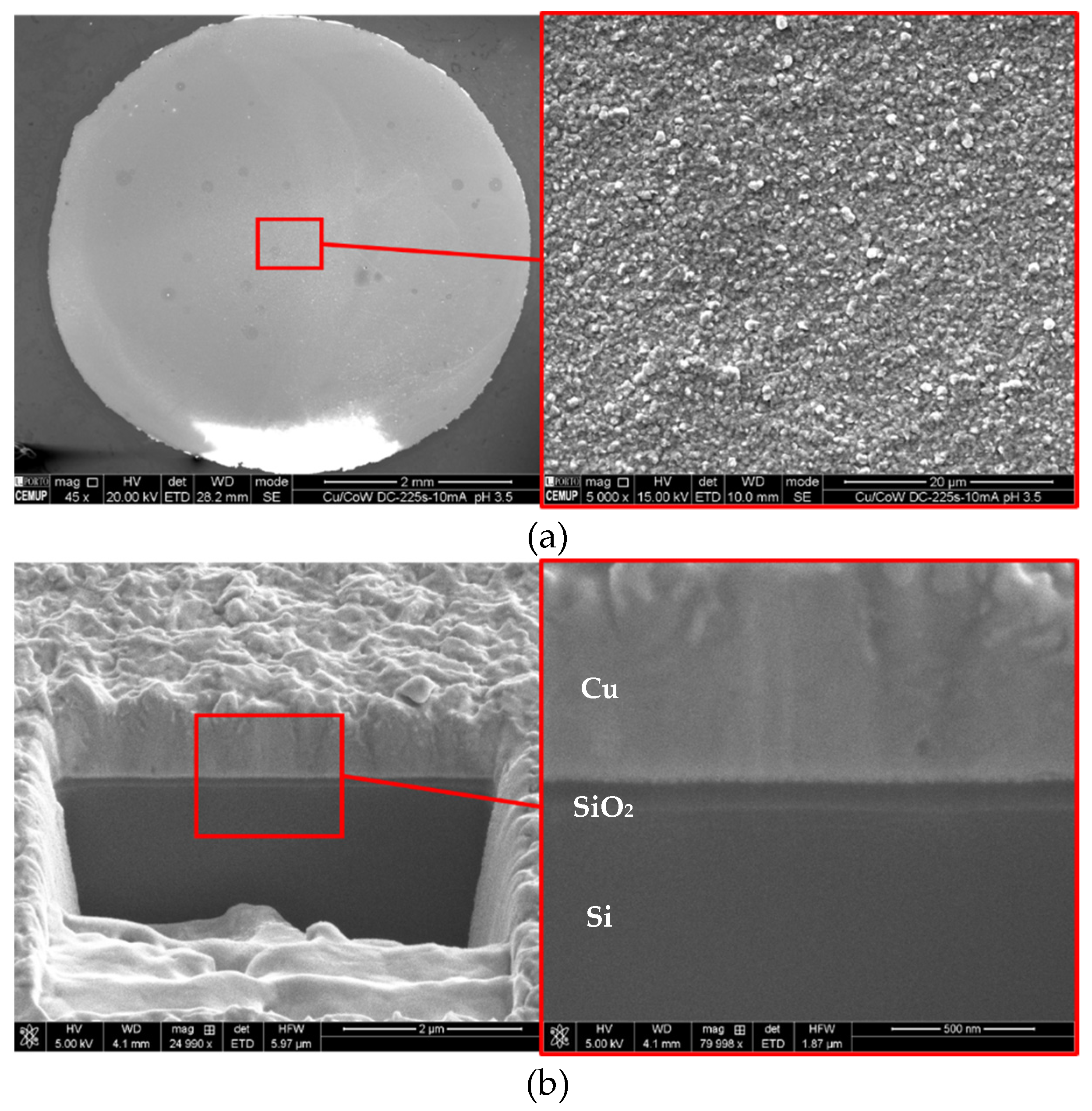