Mini-emulsion polymerization was applied for the synthesis of cross-linked polymeric nanoparticles comprised of methyl methacrylate (MMA) and Triethylene Glycol Dimethacrylate (TEGDMA) copolymers, used as matrix-carriers for hosting D-limonene. D-limonene was selected as a model essential oil, well known for its pleasant odor and its enhanced antimicrobial properties. The synthesized particles were assessed for their morphology and geometric characteristics by Dynamic Light Scattering (DLS) and Scanning Electron Microscopy (SEM), which revealed the formation of particles with mean diameters at the nanoscale (D[3,2] = 0.135 μm), with a spherical shape, while the dried particles formed larger clusters of several microns (D[3,2] = 80.69 μm). The percentage of the loaded D-limonene was quantified by Thermogravimetric Analysis (TGA), complemented by Gas Chromatography-Mass Spectrometry analysis coupled with a pyrolysis unit (Py/GC-MS). The results showed that the volatiles emitted by the nanoparticles were composed mainly of D-limonene (10% w/w of dry particles). Particles subjected to higher temperatures tended to decompose. The mechanism that governs the release of D-limonene from the as-synthesized particles was studied by fitting mathematical models to the release data obtained by isothermal TGA analysis of the dry particles subjected to accelerated conditions. The analysis revealed a two-stage release of the volatiles, one governed by D-limonene release and the other governed by TEGDMA release. Finally, the antimicrobial potency of the D-limonene-loaded particles was demonstrated, indicating the successful synthesis of polymeric nanoparticles loaded with D-limonene, owing to enhanced antimicrobial properties. The overall performance of these nanoparticles renders them a promising candidate material for the formation of self-sterilized surfaces with enhanced antimicrobial activity and potential application in food packaging. View Full-Text
Keywords: mini-emulsion polymerization; D-limonene; essential oils; antimicrobial properties; nanoparticles; cross-linking; volatile release mini-emulsion polymerization; D-limonene; essential oils; antimicrobial properties; nanoparticles; cross-linking; volatile release
►▼ Show Figures 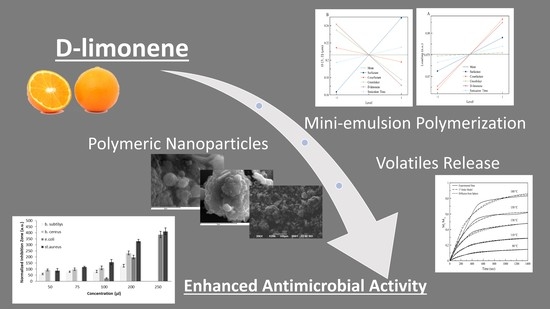