Sonication-Assisted Production of Fosetyl-Al Nanocrystals: Investigation of Human Toxicity and In Vitro Antibacterial Efficacy against Xylella fastidiosa
Next Article in Special Issue 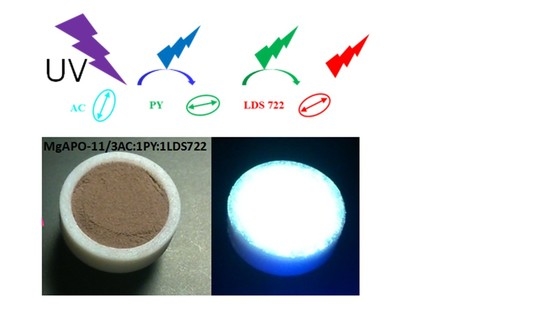 Mg-containing aluminophosphates (MgAPO-11) with the three dyes were prepared by hydrothermal crystallization method using phosphoric acid (Aldrich, Madrid, Spain, 85 wt.%), magnesium acetate tetrahydrate (Aldrich, Madrid, Spain, 99 wt.%,), aluminum hydroxide (Aldrich, Madrid, Spain), ethylbutylamine (EBA, Aldrich, Madrid, Spain), and the aforementioned dyes: AC (Aldrich, Spain 97%), PY (Acros Organics, Madrid, Spain, 75%), and LDS722 (Exciton through Lasing S.A, Madrid, Spain, laser grade, purity > 99%). All the compounds were used as received. The synthesis gels have a general molar composition of 0.2 MgO:1 P2O5:0.9 Al2O3:0.75 EBA:x dye:300 H2O, where x indicates the total amount of dye added into the gel. In this work, different dye-proportions were added to the gel, keeping constant the total amount of dye at x = 0.024 in order to not disrupt the final crystalline phase of the material. For example, a dye-proportion in the gel of 3AC:2PY:1LDS722 means that the molar fraction of AC dye in the synthesis gel is 1.5 times higher than the molar fraction of PY, and three times higher than that of LDS722. Considering that the total amount of dyes in the gel was set at 0.024, the proportion added for AC, PY, and LDS722 is 0.012, 0.008, and 0.004, respectively. The pH of the synthesis gels was between 4 and 5. The gels were heated under autogenous pressure for 24 h at 160 °C. The solid products were recovered by filtration, exhaustively washed with ethanol and water, and dried at room temperature overnight.

X-ray powder diffraction (XRD) was used to determine the crystalline phase obtained; XRD patterns were collected with a Panalytical X’Pro diffractometer (Panalytical, Lelyweg, The Netherlands) using Cu Kα radiation.
The dye content within the solid products was photometrically determined using a double beam Varian spectrophotometer (model Cary 7000, Agilent Technologies, Madrid, Spain) after dissolving the solid material in 5 M hydrochloric acid and comparing the resulting solutions with standard solutions prepared from known concentrations of the dyes at the same pH value of the sample solutions.
The absorption spectra of the dye-containing MgAPO powder samples were recorded with a Varian spectrophotometer (model Cary 7000) detecting the reflected light through an integrating sphere. The respective spectra of the MgAPO powders synthesized under identical conditions but without dyes were recorded and subtracted from the sample signal to eliminate the scattering contribution to the absorption spectra. Emission spectra of the bulk powder were recorded in an Edinburgh Instruments spectrofluorimeter (FLSP920 model, Livingston, U.K.) in front-face configuration (40° and 50° to the excitation and emission beams, respectively) and leaned 30° to the plane formed by the direction of incidence and detection. The fluorescence lifetime decay curves of the bulk powder were measured with the time-correlated single-photon counting technique in the same spectrofluorimeter using a microchannel plate photomultiplier tubes (MCP-PMTs, Hamamatsu R38094-50) with picosecond time-resolution (~150 ps). The fluorescence lifetime (τ) was obtained after deconvolution of the instrumental response signal from the recorded decay curves by means of an iterative method. The goodness of the exponential fit was controlled by statistical parameters (chi-square, χ2, and analysis of the residuals).
Absolute photoluminescence quantum yields of the dye-containing MgAPO powders were measured in an integrated sphere coupled to this spectrofluorimeter. The absorbance at excitation wavelength was obtained by comparing the scatter signal of the dye-loaded hybrid material and a Teflon disk was used as a reference (with a diffuse reflectance of 100%).
An amplified femtosecond double OPA (optical parametric amplifier) laser system was used to provide excitation pulses of 395 nm. The power of the excitation beam was set to 300 µW (300 nJ/pulse, power density = 1697 mW/cm2, energy density/pulse = 1.70 × 10−3 Joule/(pulse × cm2), number of photons/(pulse × area) = 3.20 × 1015 photons/(pulse × cm2)), and the fluorescence light emitted from the samples was efficiently collected from the same side as the excitation beam using a concave mirror. The fluorescence was then filtered using a 420 nm long-pass filter to suppress the scattered light, directed and overlapped with a gate pulse (800 nm, ca. 10 µJ) derived from the regenerative amplifier onto a lithium triborate (LBO) crystal. By tuning the incident angle of these two beams relative to the crystal plane, the sum frequency of the fluorescence light and the gate pulse was generated. The time-resolved traces were then recorded by detecting this sum-frequency light while changing the relative delay of the gate pulse versus the sample excitation time. Fluorescence gating was done under magic-angle conditions in a time window of 50 ps. Monochromatic detection in heterodyne mode was performed using a PMT (R928, Hamamatsu, Shizuoka, Japan) placed at the second exit of the spectrograph mounted behind a slit. Optical heterodyne detection is a highly sensitive technique that is also used to measure very weak changes in absorption induced by a frequency-modulated pump beam. An additional bandpass filter 260–380 nm was placed in front of the monochromator in order to reject light from the excitation and the second harmonic of the gate pulse. The electrical signal from the photomultiplier tube was gated by a boxcar averager (SR 250, Stanford Research Systems, Sunnyvale, CA, USA) and detected by a lock-in amplifier (SR830, Stanford Research Systems). The prompt response (or instrumental response function, IRF) of this setup (including laser sources) was determined by detection of scattered light of the excitation pulse under identical conditions and found to be approximately 100 fs (FWHM: full width at half maximum). This value was used in the analysis of all measurements for curve fitting using iterative re-convolution of the datasets while assuming a Gaussian shape for the prompt response.
Global analysis of the fluorescence decays obtained at different wavelengths as a sum of exponentials allowed to obtain amplitude-to-wavelength spectra. When interpreting the features of those amplitude-to-wavelength spectra, one should keep in mind that no correction for the wavelength dependency of the sensitivity of the detection setup sensitivity (mixing crystal, filters, PMT) was applied. The samples were prepared in powder form and contained in a quartz cuvette. To improve the signal-to-noise ratio, every measurement was averaged 15 times at 256 delay positions where a delay position is referred to as the time interval between the arrival of the pump and gate pulses at the sample position.

A new hybrid material has been designed herein by simultaneous encapsulation in appropriate amounts of three dyes, acridine (AC), pyronin Y (PY), and LDS722, with complementary spectroscopic bands emitting in the blue, green, and red regions of the visible spectrum, into the 1D-Mg-containing aluminophosphate framework with AEL structure, revealing an efficient white light emission under UV irradiation.
The final color is a consequence of successive partial energy transfer processes among the dyes, which can be modulated by the final uptake of each dye in the host matrix. Once the initial dye ratio is optimized in the synthesis gel, this straightforward synthesis through the one-pot occlusion of the chromophores offers an easy and fast approach to render a solid-state system with pure white light emission and an efficiency of around 20%. This type of hybrid material offers versatile white light emitter systems in which their brightness and emission color purity can be easily tuned. More importantly for future commercial applications, this material is easy and inexpensive to manufacture, and the process is not time-consuming since the incorporation of the dyes and synthesis of the hybrid material takes place in a unique step. 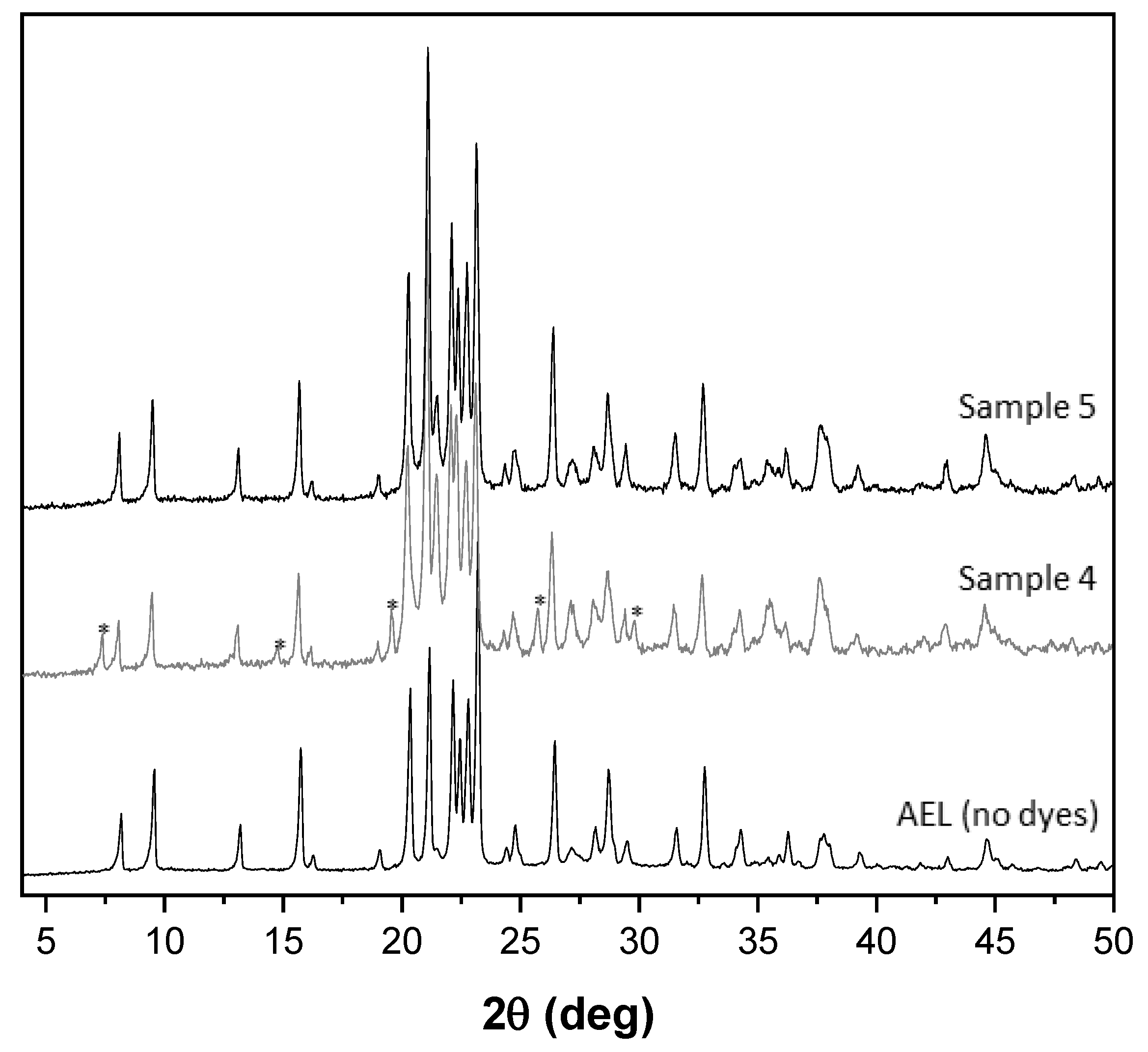 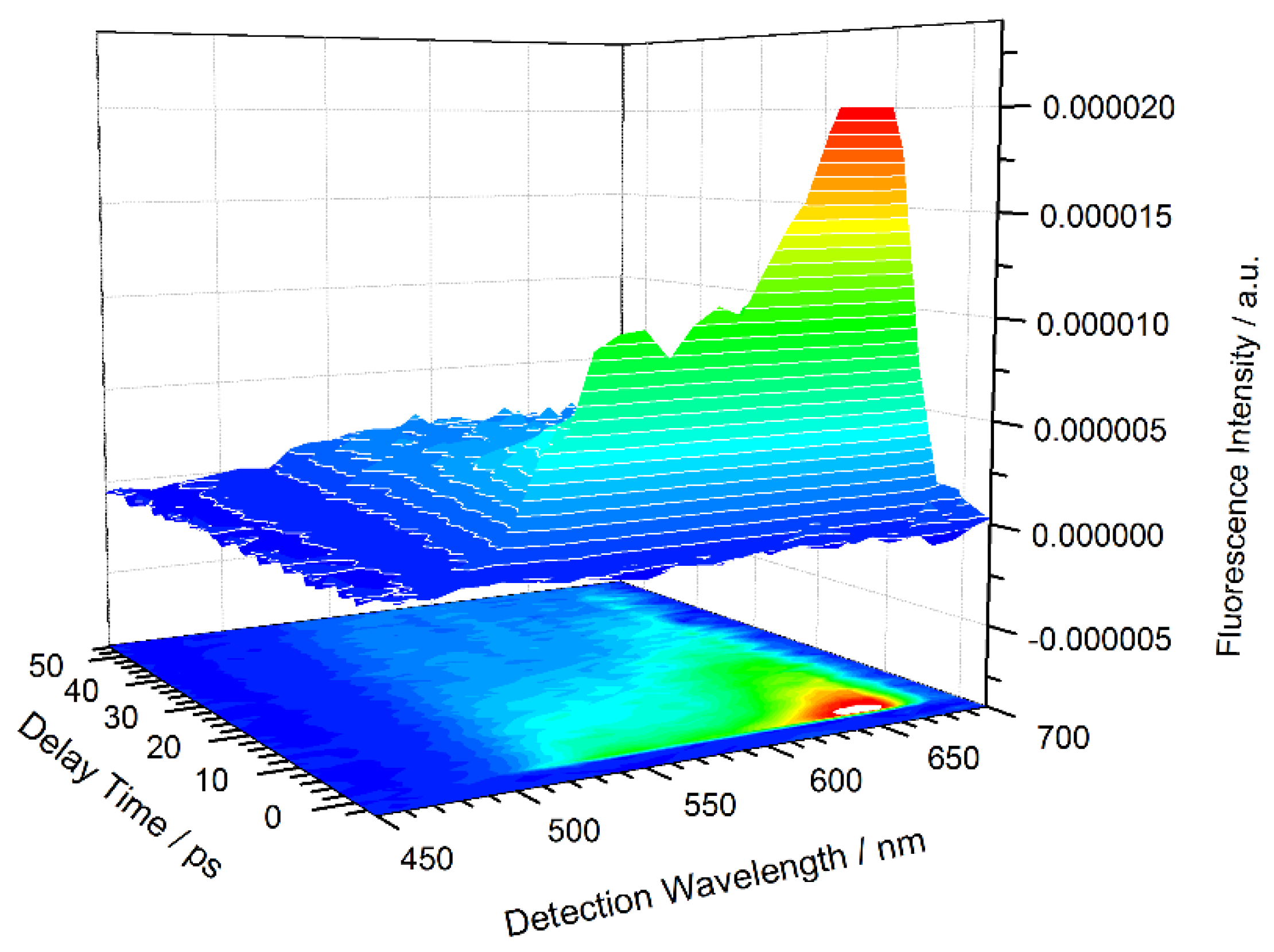 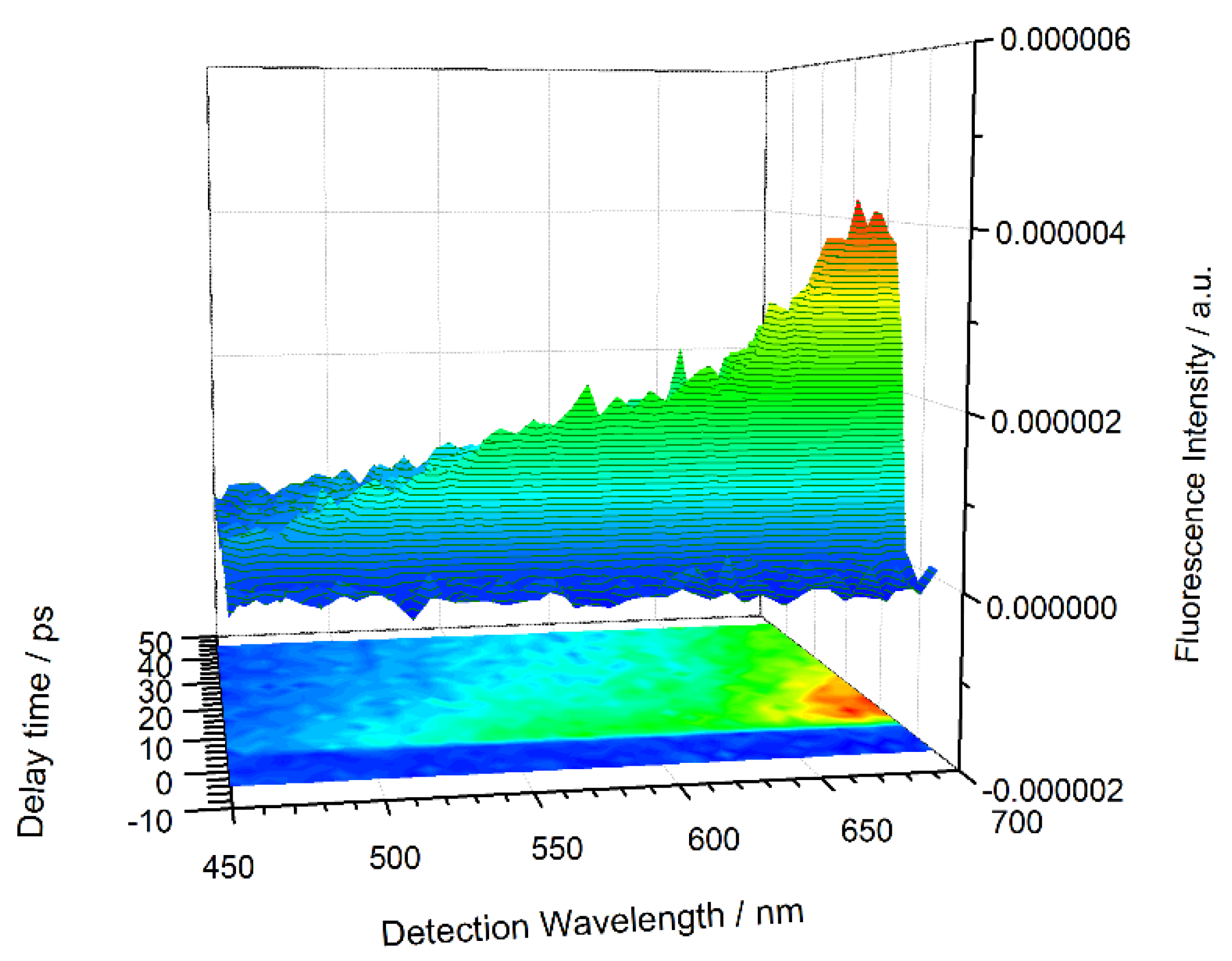 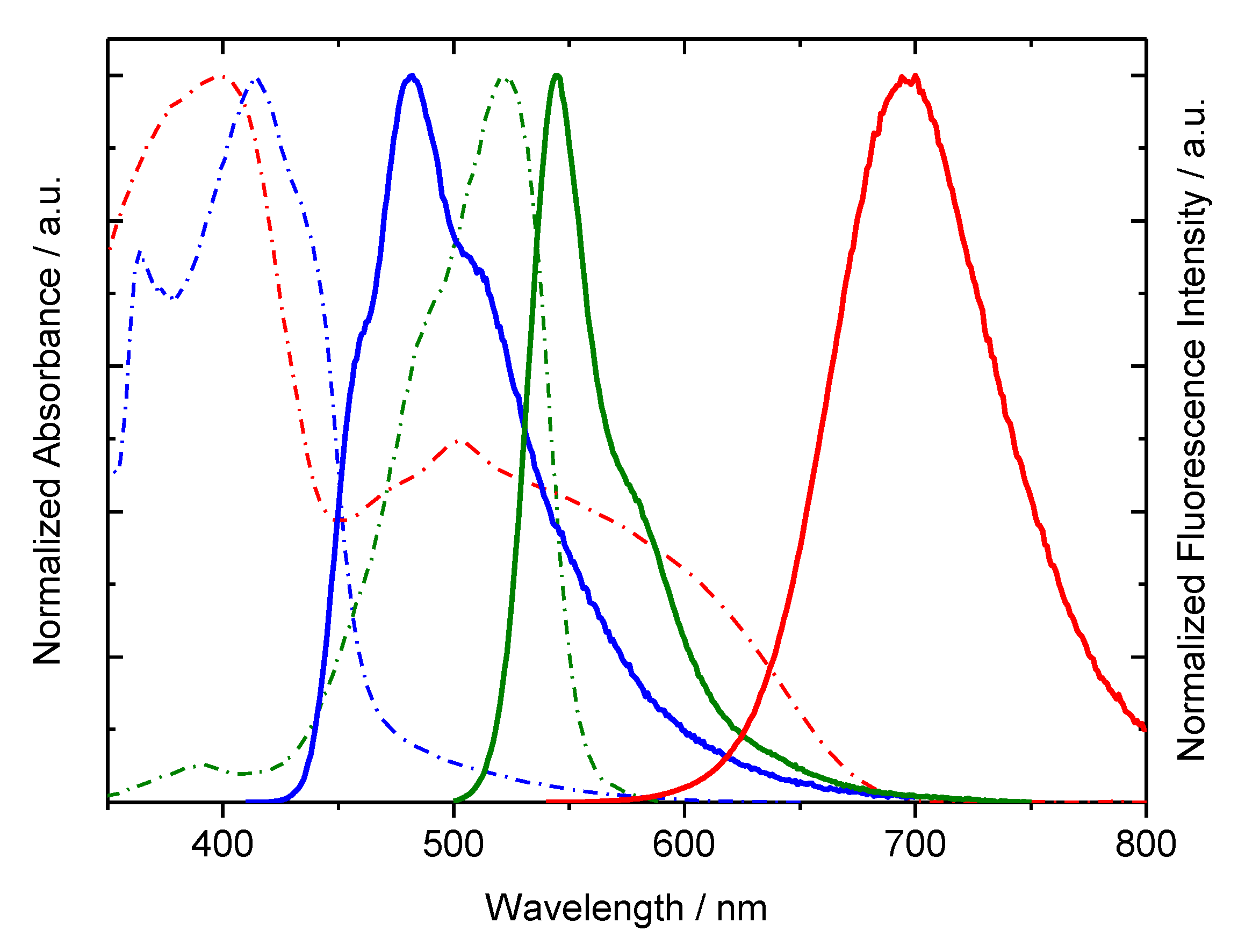 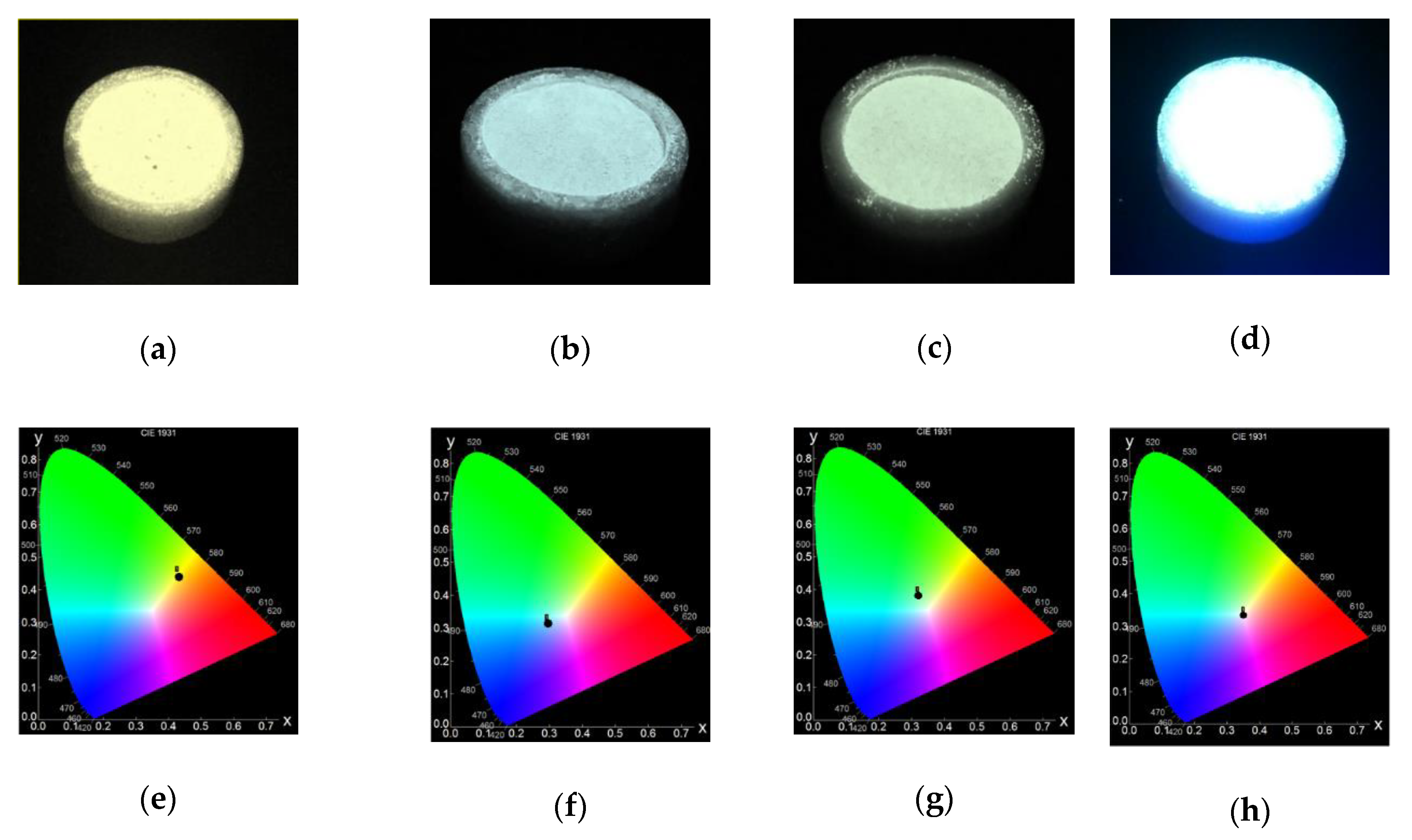 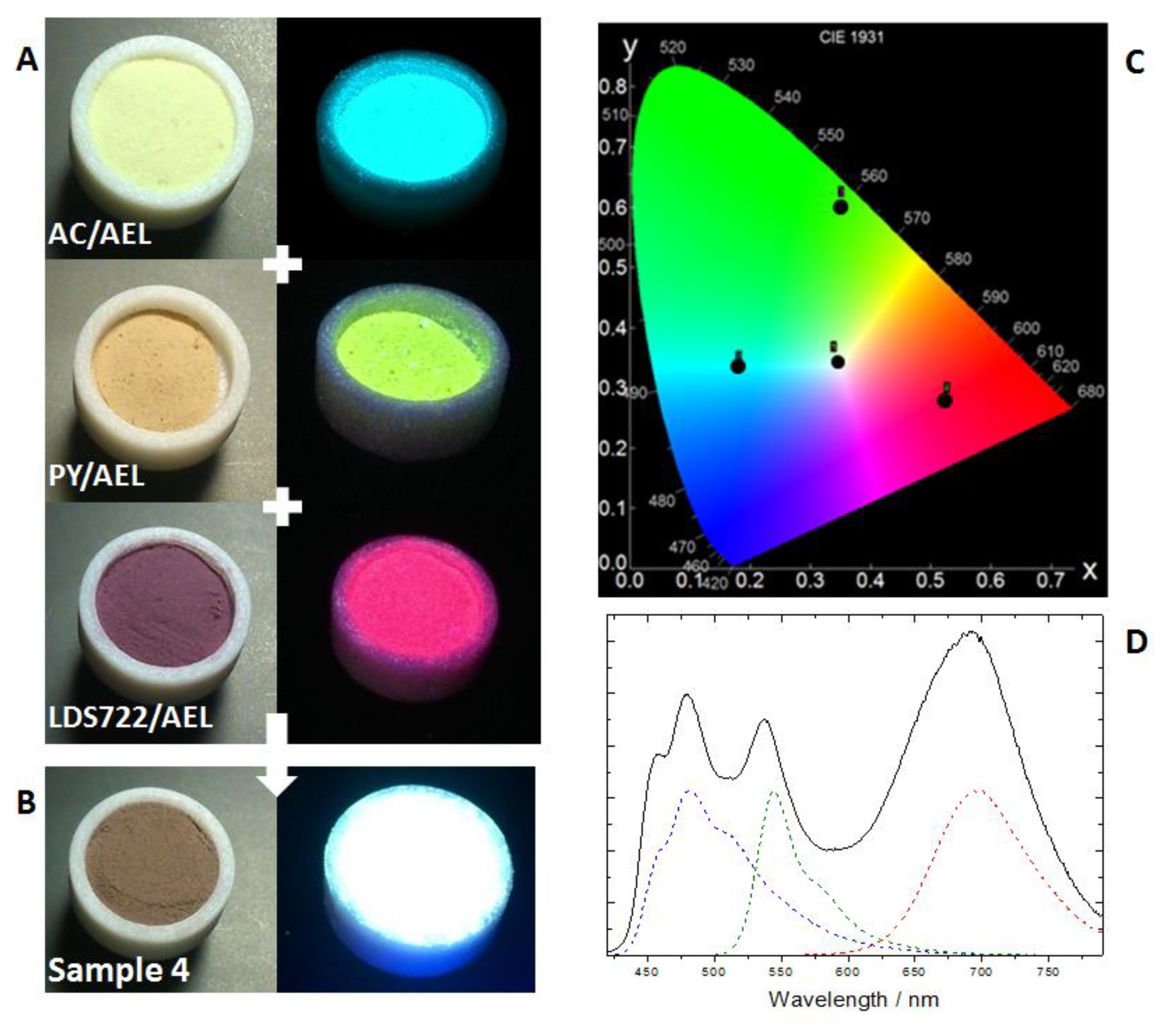