The use of nano-additives is widely recognized as a cheap and effective pathway to improve the performance of lubrication by minimizing the energy loss from friction and wear, especially in diesel engines. In this work, a simple and scalable protocol was proposed to fabricate a graphene additive to improve the engine lubricant oil. Graphene nanoplates (GNPs) were obtained by a one-step chemical exfoliation of natural graphite and were successfully modified with a surfactant and an organic compound to obtain a modified GNP additive, that can be facilely dispersed in lubricant oil. The GNPs and modified GNP additive were characterized using scanning electron microscopy, X-ray diffraction, atomic force microscopy, Raman spectroscopy, and Fourier-transform infrared spectroscopy. The prepared GNPs had wrinkled and crumpled structures with a diameter of 10–30 µm and a thickness of less than 15 nm. After modification, the GNP surfaces were uniformly covered with the organic compound. The addition of the modified GNP additive to the engine lubricant oil significantly enhanced the friction and antiwear performance. The highest reduction of 35% was determined for the wear scar diameter with a GNP additive concentration of approximately 0.05%. The mechanism for lubrication enhancement by graphene additives was also briefly discussed.
Keywords: modified graphene nanoplates; graphene additives; antifriction; engine lubricant oil additives; antiwear modified graphene nanoplates; graphene additives; antifriction; engine lubricant oil additives; antiwear

The worldwide urgency to minimize the effect of greenhouse gases and climate change requires new measures to improve engine efficiency [1]. The freeload and friction losses of diesel engine vehicles account for approximately 10% of the total energy in fuel [2]. The reduction in these losses is crucial for energy efficiency. Techniques such as system design and handling (reducing the size, electrification, and boosting), the addition of systems for the recovery of heating waste, the reduction in friction in the engine, and the improvement in the combustion efficiency have been successfully utilized to improve engine efficiency. In order to theoretically find suitable methods to enhance engine efficiency, the open-source software framework called PERMIX can be employed [3]. Among these techniques, friction reduction has been receiving significant attention from scientists around the world as a key and cost-effective method to maximize the energy efficiency of diesel fuel. One of the major approaches to reducing friction is the use of lubricants, which can be widely applied in automotive, mechanical, and other parts. Lubricants reduce the friction between the interface of two metal parts in relative motion [4]. Additives are commonly added to the blend of lubricants to improve the lubricating efficiency [5,6,7].
Since emerging as a technique to fabricate advanced materials, nanotechnology has provided properties superior to those of traditional bulk materials, and nanomaterials have been intensively used as additives for enhancing lubricant performance. Many nanomaterials such as copper [8], MoS2 [9], PbS [10], WS2 [11], Zinc borate [12], ZrS2 [13], boric acid [14,15], and SiO2 [16], have been employed for this purpose. Carbon nanomaterials with many allotropes have remarkable lubricating properties and have also been utilized as additives to improve the performance of lubricant oils. These carbon nanomaterials consist of carbon nanotubes [17,18], porous carbon [19], fullerence [20,21], and graphene [22,23,24].
Graphene, a two-dimensional (2D) carbon material with substantial mechanical, electrical, and thermal properties, has been extensively used in a wide range of industrial applications in the fields of engineering, chemistry, and physics [4,25,26,27,28,29,30]. Additionally, the 2D structures easily slide together, making graphene an effective additive for lowering the friction in mechanical parts and vehicle engines [31,32,33,34]. For example, Zhang et al. successfully fabricated graphene nanosheets from graphene oxides and modified them with oleic acid to be used as additives in lubricant oil to reduce the friction coefficient and wear scar diameter by 17% and 14%, respectively [35]. In another study, Azman et al. blended graphene with 95 vol % synthetic based oil (PAO 10) and 15 vol % palm-oil trimethylolpropane (TMP) ester to reduce the wear scar diameter by 15% [36]. Several works have used graphene as an additive in engine lubricant oil; however, these works either used an expensive graphene-fabricating method (hummer methods) or a low dispersion of graphene in the lubricant oil, which hinder the widespread use of graphene as an additive in the lubricating industry. Furthermore, in order to effectively employ the graphene in practical applications, the dispersion and modification of graphene in any solution are crucial factors.
Herein, we adopt a new and facile method, continuing from our previous work, for the mass production of graphene nanoplatelets (GNPs) by the simple one-spot chemical exfoliation of natural graphite. The resultant GNPs are well-dispersed in water with the assistance of a surfactant. The surfaces of the GNPs are modified to easily and homogeneously disperse the GNPs in the targeted engine lubrication oil with a high stability over a long period of storage time. The prepared and modified GNPs are thoroughly characterized. The enhanced lubricating performance of the GNPs additive-containing lubricant is investigated and discussed.

The fabricating protocol for graphene nanoplatelets (GNPs) was adopted from our previous work [37]. Natural graphite flakes were added to a 1000-mL reactor containing concentrated sulfuric acid and stirred for 30 min. Sodium persulfate was gradually added into the reaction mixture and further stirred for 3 h at room temperature. The resultant reaction mixture was directly filtered using a glass sintered filter and thoroughly rinsed three times with dry acetone and water to remove any residual reactants. The GNP powder was dried at 60 °C in air and stored for further processing.

Figure 1 illustrates the modification procedures for the graphene nanoplatelets. The GNP powder was first dispersed in an aqueous solution using a combined high shear mixer/probe sonicator system with the assistance of a sodium dodecyl persulfate (SDS) surfactant for 12 h. The homogeneous GNP dispersion in the water with a GNP content of 5% w/w was used for further modification with oleic acid. For the modification, 15 g of oleic acid was gradually added to 300 mL of GNPs in water with a high shear mixer at 7000 rpm and 80 °C for 3 h. The resultant solution was thoroughly dried at 140 °C, and the oleic acid-modified GNP additive was obtained. The modified GNP additive was added to the HD-50 lubricant base oil with various concentrations ranging from 0.005–0.1% w/w to evaluate the effectiveness of the additive for enhancing the properties of the lubricant oil.

Scanning electron microscopy (SEM), FEI Nova NanoSEM (Hillsboro, OR, USA), was utilized to investigate the morphology of the GNPs obtained from the exfoliation of the graphite flakes. The thickness of the prepared GNPs was measured with an AFM (Bruker Multimode 8 with PF TUNA, CA, USA). Fourier transform infrared (FTIR) measurements were performed on a PerkinElmer D100 spectrometer (Ohio, USA) in attenuated total reflectance mode. Raman spectra were obtained with a PerkinElmer Raman Station 200F (Ohio, USA). Bruker AXS D8 Discover instruments (Texas, USA) with a general area detector diffraction system using Cu Kα source were utilized to obtain X-ray diffraction (XRD) patterns of the prepared samples. A tribological test was performed on the four-ball tribometer (MRS-10A, Shandong, China). The test was carried out at room temperature under a load of 400 N with a speed of 1450 rpm.

In conclusion, graphene nanoplatelets were successfully fabricated from natural graphite by direct chemical exfoliation. The resultant GNPs were well-dispersed in an aqueous solution with the assistance of a surfactant and a combination of a high shear mixer and a probe sonicator system. The surface of the graphene was then modified with an organic compound. The as-prepared GNPs were less than 15 nm thick and 10–30 µm in diameter. The results indicate that the modified GNP surface was uniformly covered with oleic acid after modification. The modified GNP additive is facilely dispersed in lubricant oil with remarkable stability, and the GNPs remained in the oil for more than 30 days without settling. The addition of the GNP additive to lubricant oil shows a significant improvement in the tribological performance with a maximal wear scar diameter reduction of 35% at a modified GNP concentration of 0.05% w/w. The formation of a protective graphene layer on the steel surface is responsible for the enhancement of antiwear performance when using the GNP additive in lubricant oil. This remarkable enhancement of the lubricating efficiency (more than 35% enhancement) uses small amounts of the modified GNP additive (approximately 0.05%) that are cost-effectively fabricated and will diversify the practical applications of graphene in the reduction in energy losses from friction and wear in mechanical processing and automotive components.

This work was financially supported in part by Vietnam National Foundation for Science and Technology Development (NAFOSTED) under grant number 104.05-2019.01.

We are grateful to the research collaboration among the groups, institutions, and universities of the authors. The authors also would like to thank the reviewers and editors for helpful comments and constructive advice to improve this manuscript. 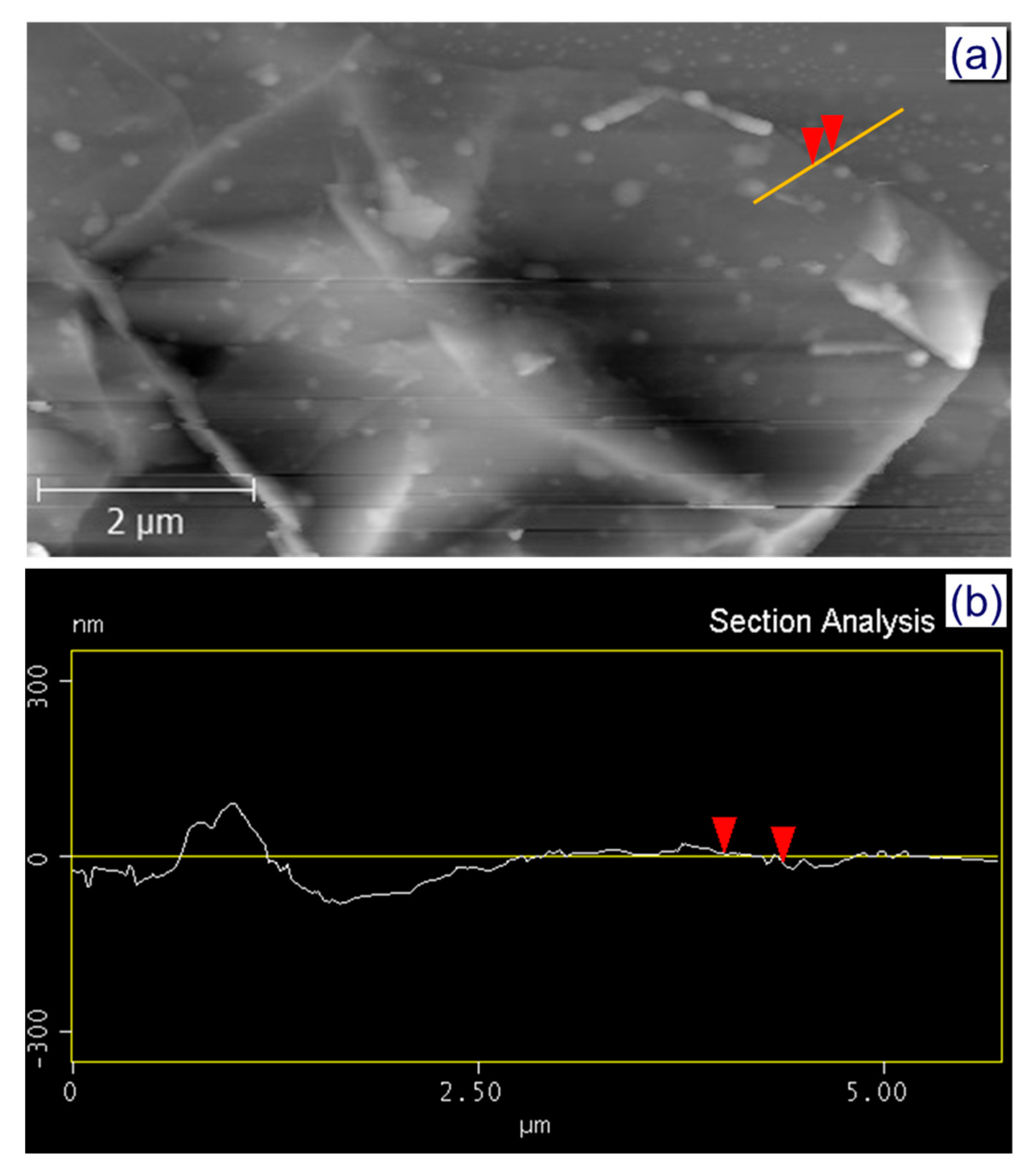 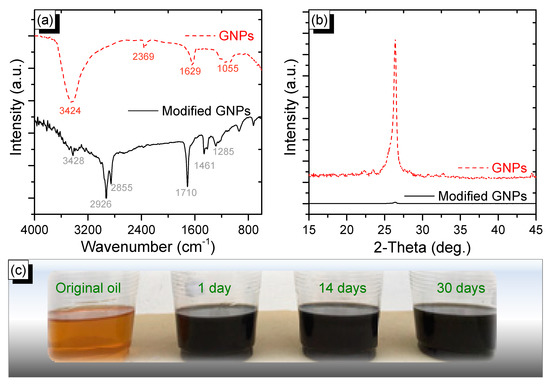