Nanoparticles (NPs) have emerged as a powerful drug-delivery tool for cancer therapies to enhance the specificity of drug actions, while reducing the systemic side effects. Nonetheless, NPs interact massively with the surrounding physiological environments including plasma proteins upon administration into the bloodstream. Consequently, they are rapidly cleared from the blood circulation by the mononuclear phagocyte system (MPS) or complement system, resulting in a premature elimination that will cause the drug release at off-target sites. By grafting a stealth coating layer onto the surface of NPs, the blood circulation half-life of nanomaterials can be improved by escaping the recognition and clearance of the immune system. This review focuses on the basic concept underlying the stealth behavior of NPs by polymer coating, whereby the fundamental surface coating characteristics such as molecular weight, surface chain density as well as conformations of polymer chains are of utmost importance for efficient protection of NPs. In addition, the most commonly used stealth polymers such as poly(ethylene glycol) (PEG), poly(2-oxazoline) (POx), and poly(zwitterions) in developing long-circulating NPs for drug delivery are also thoroughly discussed. The biomimetic strategies, including the cell-membrane camouflaging technique and CD47 functionalization for the development of stealth nano-delivery systems, are highlighted in this review as well. View Full-Text
Keywords: nanoparticles; polymer; stealth; drug delivery; opsonization; phagocytosis nanoparticles; polymer; stealth; drug delivery; opsonization; phagocytosis
►▼ Show Figures 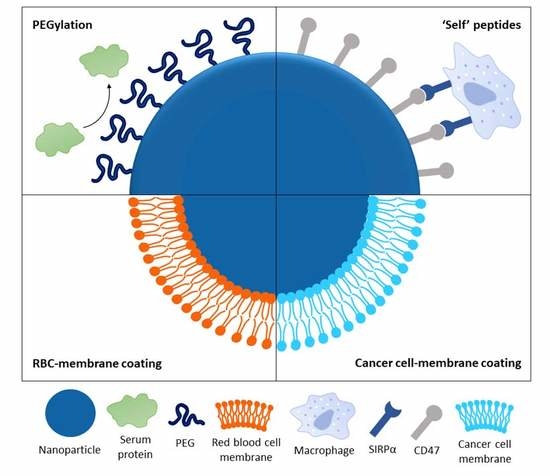