Using smart nanopesticide formulations based on nanomaterials can offer promising potential applications for decreasing pesticide residues and their effects on human health and the environment. In this study, a novel nanoformulation (NF) of thiamethoxam (TMX) was fabricated using the solvent evaporation method through loading TMX on cellulose nanocrystals (CNCs) as the carrier. The synthesized TMX-CNCs was investigated through different techniques, such as Fourier transform infrared spectrometer (FT-IR), X-ray diffraction (XRD), transmission electron microscopy (TEM), dynamic light scattering (DLS), and thermogravimetric analysis (TGA). The results revealed that the loading efficiency and entrapment efficiency were 18.7% and 83.7 ± 1.8% for TMX, respectively. The prepared nanoformulation (TMX-CNCs) had a width of 7–14 nm and a length of 85–214 nm with a zeta potential of −23.6 ± 0.3 mV. The drug release behavior study exhibited that the release of TMX from TMX-loaded CNCs was good and sustained. Furthermore, bioassay results showed that the insecticidal activity of TMX-CNCs against Phenacoccus solenopsis was significantly superior to that of the technical and commercial formulation, as indicated by the lower LC50 value. The results indicate that the TMX nanoformulation has great potential for application in agriculture for pest control. View Full-Text
Keywords: cellulose nanocrystals; thiamethoxam; insecticidal activity; Phenacoccus solenopsis cellulose nanocrystals; thiamethoxam; insecticidal activity; Phenacoccus solenopsis
►▼ Show Figures 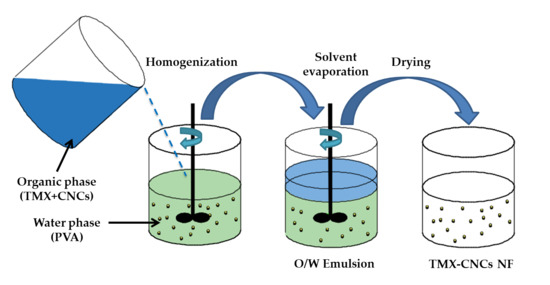